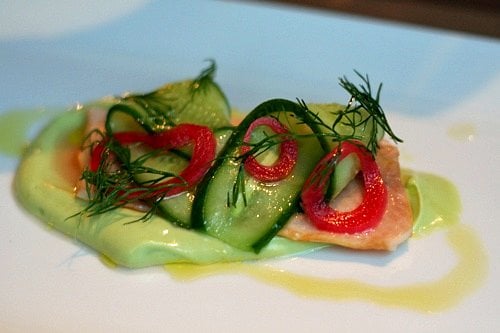 Three of the hottest, most sought-after tables in Paris are lorded over by les américains. A few are part of the “underground” dining scene, which seems to be a global phenomenon, another is a one-man show (for now), and the forth is a cozy little resto located in a back alley where a French chef, who trained mostly in America, is combining the best of both cultures.

When two young cooks moved to Paris from Seattle, they began hosting dinner parties in their apartment, which was stark and nowhere near as sumptuous as their current digs. I can’t tell you where it is, but once you reserve, you’ll be in the know soon enough.

Hidden Kitchen is now in a more luxe location and the open kitchen overlooks the dining table where a multi-course dinner is served, and ten courses isn’t unusual. The chefs head to the market beforehand to scope out what’s fresh, so you won’t know what’s on the all-inclusive menu until you arrive.

But the courses are small, impeccably fresh, and inventive. So you won’t leave feeling overstuffed. And multiple wines are poured to compliment the food. They’re booked months in advance, naturally, but you can also follow them on Twitter, where they post last-minute cancellations, if you want to be in-the-know.

UPDATE: As of October 2011, Hidden Kitchen is no longer operating. The owners have opened Verjus wine bar and restaurant in Paris, and you can visit them there.

One of my most frequently asked questions is: “Hey David, do you know those two guys from Chez Panisse who….” and I cut them off right about there and finish the sentence for them, since I know what’s coming.

They’re talking about Chien Lunatique, the supper club of David Tanis and Randal Breski, who spend half a year in Paris, and the other half in the Bay Area, where David is the chef downstairs at Chez Panisse. So if you’ve written and don’t get a response, it’s likely because they’re off cooking elsewhere.

But if you can get in, you’ll have some of the best food of your life. I’ve eaten there a number of times and Romain is still talking about David’s pot au feu years later, with a glazed look in his eyes. His cooking is that good.

David is the author of A Platter of Figs and Other Recipes (I made his recipe for Spinach Cake), and the quirky nature getting a place at this elusive table d’hôtel is part of the excitement of finally landing a seat at this address.

Daniel Rose eventually closed his tiny restaurant which only had 16 seats to move to a new, larger location, with a wine bar as well. Much anticipation followed the move and my lunch there was copious and intriguing. The menu changes daily and you might start with heirloom tomatoes with charred leeks and end with a lemon dessert with amazing raspberries.

There is a bouillon lunch menu, and a longer, more detailed dinner menu (€64). The restaurant changes constantly, like the food, but my lunch was pretty wonderful and surprisingly filling. You can find a compilation of write-ups at Paris by Mouth.

When I called to make a reservation, right before hanging up, the person on the other end of the phone said to me, “Okay…awesome!” in English, which gave me a chuckle. It was likely chef-owner Gregory Marchand, who worked in New York at Gramercy Tavern for 1 1/2 years, and in London, before resettling back in his native France.

So he’s not technically American, but his cooking is certainly influenced by the new-American sensibility (for lack of a better term) for sourcing excellent products and not doing too much to them. The food is just fancy enough so you feel like you’re eating out, without being fussy. And I must say, I had the best lemon tart I’ve had in Paris at Frenchie, with a spoonful of strawberry sauce and a generous handful of fraises des bois, which I was not happy to share, thank you very much.

The signature smoked trout with asparagus purée (photo above) is a great way to start a meal, and the desserts, like the apricot and frangipan tart topped with crème fraîche and the barely-set panna cotta with summer berries and streusel, are influenced by Claudia Fleming, according to chef Marchand. The menu changes daily with two courses in each category and the 3-course menu is priced at €33. I always order wine by the carafe from the list on the wall, and haven’t hit a clunker yet.

As Alec Lobrano said, Frenchie is exactly the kind of restaurant you’d want in your neighborhood. (Actually, one of my best friends lives upstairs. Lucky her!) And when we left, the staff was outside drinking beers with the last of the remaining customers. Which was, indeed, awesome. And now there’s a wine bar just across the alley.

(Note that prices and menu items are subject to change.)