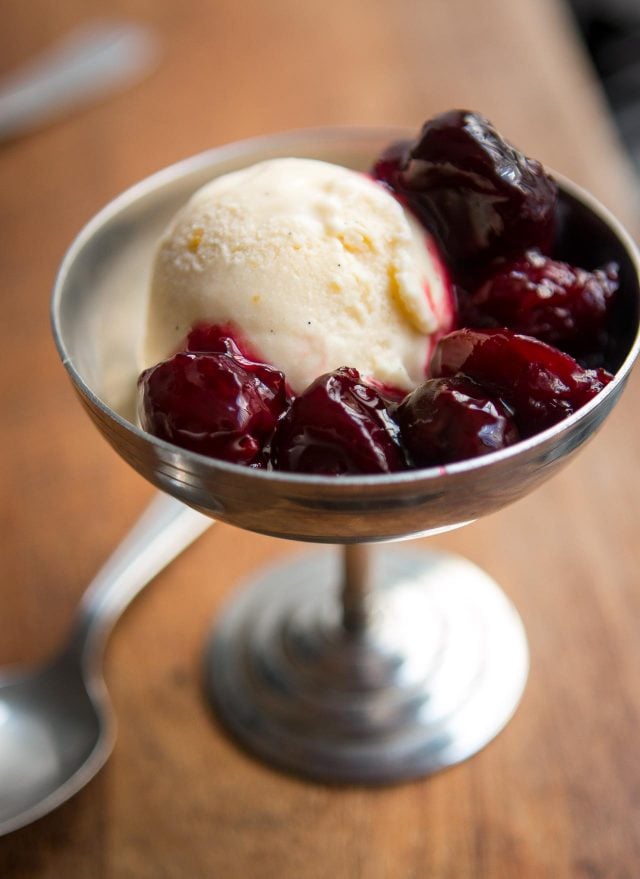 Everyone should have a great recipe for Vanilla Ice Cream in their repertoire. Here’s my favorite, which you can serve with anything, from a freshly-baked fruit pie, a warm berry crisp, cherry compote, or simply smothered with dark chocolate sauce or caramel sauce and toasted nuts.

It’s said that vanilla is the most popular flavor of ice cream. But most people don’t know that vanilla is also the most labor-intensive of all crops which makes vanilla beans and pure extract a bit costly. Thankfully, a little vanilla goes a long way. In my vanilla ice cream recipe, I use both the bean and some vanilla extract since I find they’re slightly different flavors, and each compliments the other. 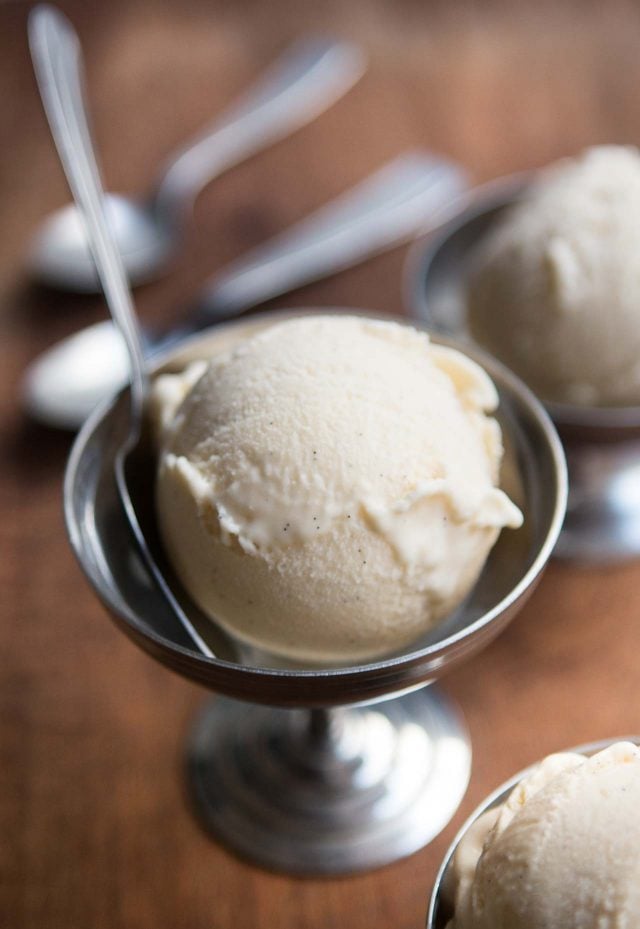 A noted food science writer agreed with my idea of using both (rather than just a vanilla bean), telling me that they’ve discovered that alcohol (which most vanilla extracts contain), even if cooked off, improves the way we sense the taste of things. That confirmed what my taste buds were telling me. 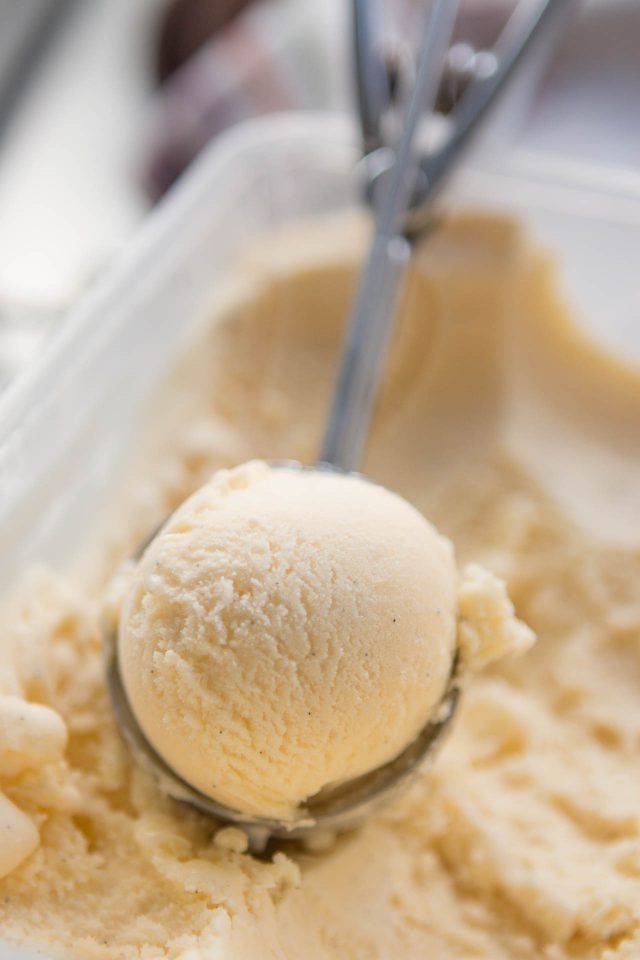 The three most common types of vanilla are Bourbon, Tahitian, and Mexican. Bourbon vanilla, from Madagascar, which has the boldest, strongest flavor. Tahitian is more floral and bit more elusive. Real Mexican is strong, yet creamy-tasting, perhaps my favorite of them all. Don’t use the cheap Mexican knock-offs since most contain coumarin, which is toxic and banned in the United States. True Mexican vanilla is priced similar to other vanillas and like all vanilla extracts, the good stuff is worth every cent.

The best way to tell if a bean is good or not is to take a sniff. The plumpness of a bean doesn’t necessarily mean it has more flavor or essential oils; it may just have more water. And if you smell anything smoky, that means the bean was cured quickly over the fire, rather than dried properly, and not of good quality. 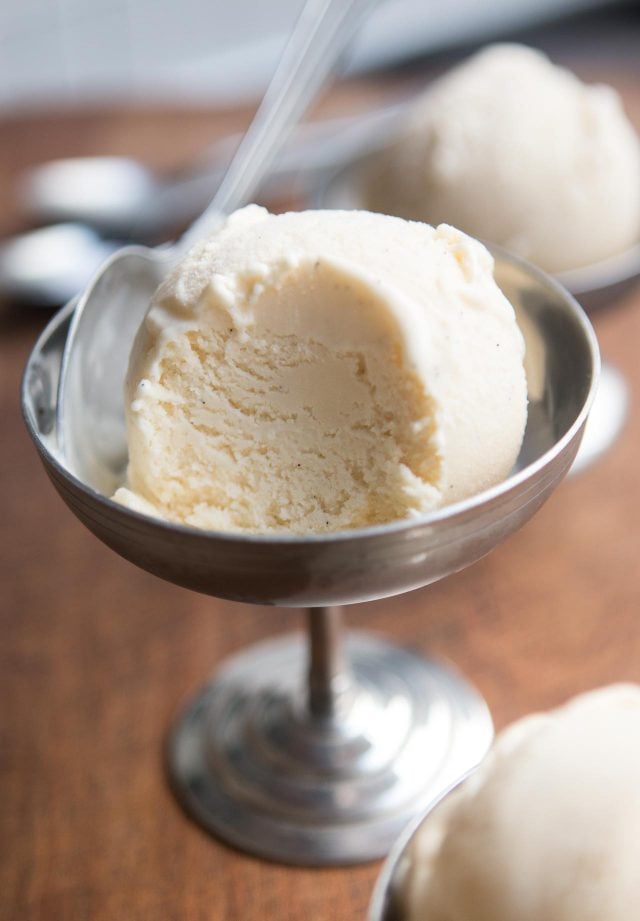 Since vanilla beans are expensive, you want to get as much use out of them as possible. Once you’ve finished using it, rinse and dry the bean on a plate until it’s brittle, then burrow it in a container of sugar. (You can keep adding other vanilla beans to that sugar, as you use them in your kitchen.) Not only will they add their lovely scent to the sugar, but you can re-use the beans for anything, from adding to a pot when poaching fruit, to jam-making. You can also pulverize the dried beans with sugar in a food processor and use it in cake and cookie batters.

Adapted from The Perfect Scoop (Ten Speed Press) For a richer custard, you can add up to 3 more egg yolks. For a less-rich custard, substitute half-and-half for the heavy cream, realizing that the final texture won’t be as rich or as smooth as if using cream.
1 cup (250ml) whole milk
A pinch of salt
3/4 cup (150g) sugar
1 vanilla bean, split lengthwise
2 cups (500ml) heavy cream
5 large egg yolks
1 teaspoon pure vanilla extract
1. Heat the milk, salt, and sugar in a saucepan. Scrape the seeds from the vanilla bean into the milk with a paring knife, then add the bean pod to the milk. Cover, remove from heat, and infuse for one hour.
2. To make the ice cream, set up an ice bath by placing a 2-quart (2l) bowl in a larger bowl partially filled with ice and water. Set a strainer over the top of the smaller bowl and pour the cream into the bowl.
3. In a separate bowl, stir together the egg yolks. Rewarm the milk then gradually pour some of the milk into the yolks, whisking constantly as you pour. Scrape the warmed yolks and milk back into the saucepan.
4. Cook over low heat, stirring constantly and scraping the bottom with a heat-resistant spatula until the custard thickens enough to coat the spatula.
5. Strain the custard into the heavy cream. Stir over the ice until cool, add the vanilla extract, then refrigerate to chill thoroughly. Preferably overnight.
6. Remove the vanilla bean and freeze the custard in your ice cream maker according to the manufacturer’s instructions.

Note: Used vanilla beans can be rinsed and dried, then stored in a bin of sugar. That sugar can be used for baking and, of course, for future ice cream making.

How to buy vanilla and vanilla FAQs

Recipes to use up leftover egg whites

How long does ice cream last? 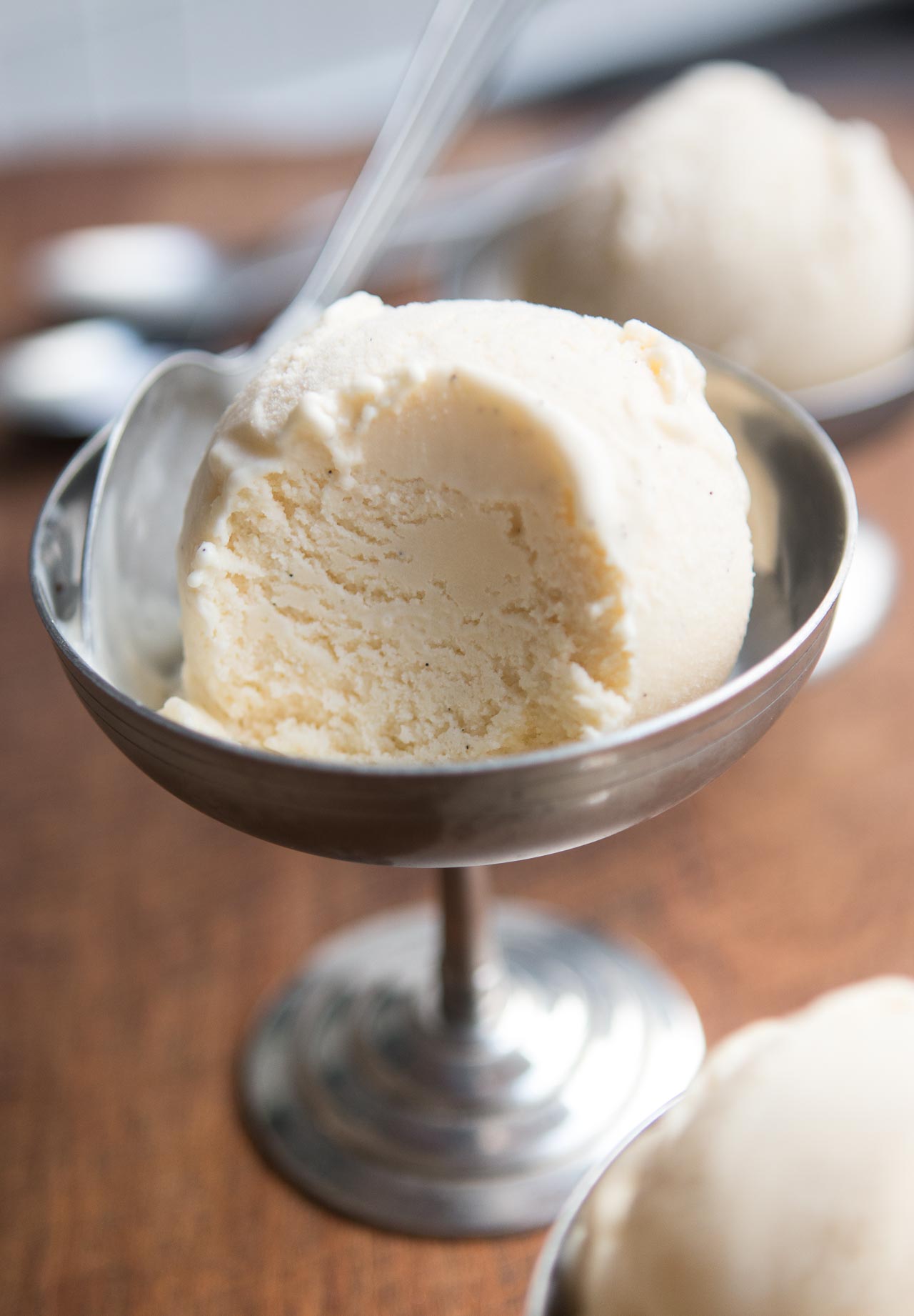