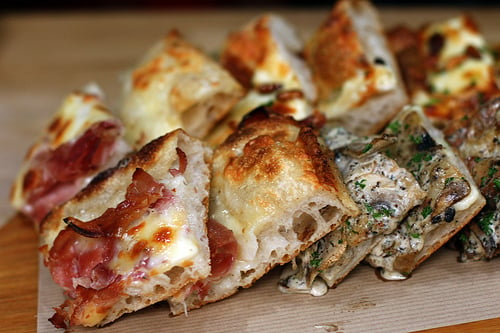 For quite some time, whenever I’d go out to eat in Paris with a visiting friend, their gaze would invariably land on something Italian on the menu. And they’d want to order something like risotto or salad Caprese, which I’d warn them away from. Or pizza, which might come to the table with some unexpected topping, like canned corn or pineapple. When I moved to Paris, I thought it odd that Italian food wasn’t as well- represented here as I assumed it would be. After all, France shares a border with Italy. But on the other hand, look at how Canadian food is represented in the United States. So I guess that explains that.

When I asked a friend who came last year what she wanted for dinner, she said, “I don’t care. As long as the food is good”, which sounded fine to me. The only problem was, that I’d had a long day and wanted to eat somewhere in my neighborhood and I couldn’t think of anywhere decent—except for the pizza place run by the Sardinians. When I suggested it, she said, “I didn’t come to Paris to eat pizza.”

But it made me realize that in the past five years, Italian food has really come into its own in Paris, and last week, a place that makes their own pasta was turning people (including us) away in droves when we tried to get a couple of seats. When I decided to hit Grom on Sunday, the line trailed out the door and onto the street.

There are some really great pizza places now across Paris serving the real-deal, including Al Taglio, which unlike the other places, serves pizza like they do in Rome, meaning they bake off large rectangles of pizza then cut off squares as you order them. The pizza pieces are weighed, priced, and then warmed up and brought to your table, living up to the name al taglio, or “by the slice.” 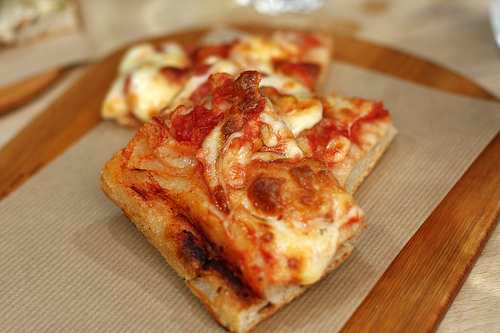 I immediately knew I would like Al Taglio as soon as I walked in because I like sitting at high counters. Although there are tables overlooking the small square outdoors, there’s something about sitting on a high stool at a communal table that’s always been my very favorite way to eat. It’s just so convivial. When friends came in to eat in restaurants where I worked, I just pulled up a stool next to where I was working so I could talk to them when they had dinner and I love cooking while talking to people, as long as they’re seated and at a distance. And pouring me wine.

The pizzas range from a simple Melanzane (eggplant and garlic) to more ambitious Zucca e pancette (bacon and pumpkin cream). I tried three: Patate tartufo (potato and truffle cream), Salami piccante (artichokes and spicy salami) and Amadriciana. (Even though I said the French are embracing authentic Italian cuisine, I guess these things are considered exotic by some, though, because the Le Fooding guide called their toppings ‘chic‘. Black truffles aside, I’m not sure what’s so chic about eggplant, bacon, salami, and potatoes.)

All the pizzas are sold by the kilo, and prices vary depending on the topping. All three I tried were great, with nice, crunchy crust, and flavorful topping. It made a perfect early afternoon lunch along with a very full glass of Anghelia (€3.8), which brought the total of my meal to just over €13. It also made me a wee-bit tipsy. 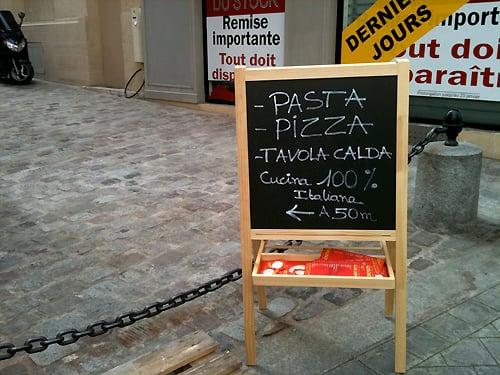 One thing that’s a bit curious is the counter service, which some might consider authentically Italian: one woman was busy taking the orders, cutting the pizza, and weighing the squares, while the fellow next to her watched, then brought out the pizza to the customers. The kitchen was a bit more active: just a few feet away, two guys were working on the next batch of pizzas, scattering them with cubes of mozzarella and bits of speck and other toppings, before sliding them into the oven.

But I’ve learned not to be in a hurry when it comes to food, both in France and Italy, and to relax. And I’ve let go of all that racing to get through a meal or expecting service with a snap. When you do, you have a much better time. Indeed, everyone here was smiling and friendly, including her.

And after working in restaurants for three decades, I always advise people to never mess with people who are making their food or serving it to them. (And that applies to nurses and flight attendants, too.)

I’d imagine Al Taglio gets packed at prime time. But since they’re open continuously throughout the afternoon, my advice is to go for a late lunch. So along with places to get good gelato in Paris, I can confidently add Italian pizza to that list.

(Note: The blackboard sign in the post isn’t related Al Taglio, which does not offer a tavola calda.)