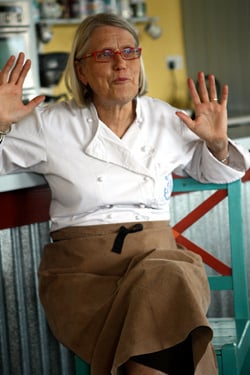 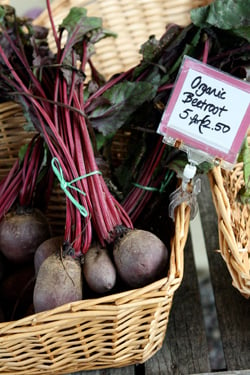 When Darina Allen sat down to talk to us, a small group of food writers, it was just after her son and daughter in law, Rachel Allen. It was definitely nap time, and I put my camera in my bag along with my notepad, and contemplated having a little bit of a mental break while sit around in a kitchen, listening as Darina planned to tell us about her Ballymaloe Cookery School.

Well, that was the wrong idea. Because within seconds after Darina started talking, I scrambled around in my messenger bag for my notepad and pen because every word and phrase that came out of her mouth was note-worthy. 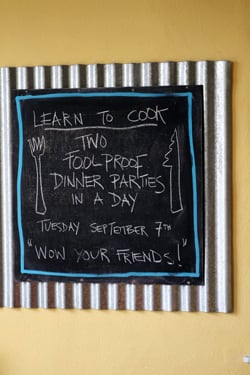 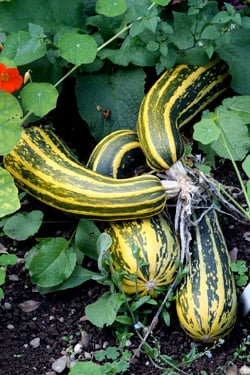 I’m not a reporter and can’t write very fast (thirty five years working in professional kitchens seem to be taking their toll), plus I’ll never be a journalist because I always get too involved in what I’m seeing or who I’m talking to rather than focusing on taking notes and zeroing in on facts and figures. But I tried to catch as much as I could as she spoke faster than I could jot things down.

Darina started Ballymaloe Cookery School in 1983. When starting out, she had no idea what she was doing, and no money, but decided to take a cooking class with Marcella Hazan in Italy. At their final dinner, on the Adriatic, she said to us “I was eating this lovely dinner, and thought—We have the same fresh, high-quality ingredients in Ireland. And you know what? Our fish is better!”

Her eyes were bright as she spoke, behind her red-rimmed glasses. She was no-nonsense, which are the kind of cooks I’ve always worked with and liked. People who are wishy-washy don’t cut it for me and Darina has definitive ideas about how things should and shouldn’t be, making her my kind of person. She told us of several ‘chefs’ she’d met over the years had no idea what went in to raising the ingredients that they cooked with and thought that anyone who wanted to be a chef “absolutely” had to spend a year working in a garden first, before even stepping into a kitchen. 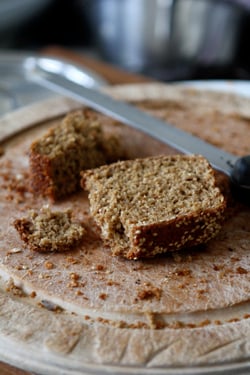 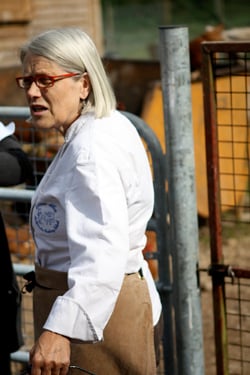 Passing through the kitchen and dish washing area, there was a bowl with perhaps a scant handful of honeycrunch crumbs left, which most kitchen folks would toss out. Lifting the bowl and running her fingers through the candied nuggets, she pointed it out to no one in particular, but made a general announcement; “Will some make sure this gets folded into some ice cream?”

A bowl of langoustine shells were also targeted; “Make sure we don’t waste these. Will someone please make these into a bisque?” Which wasn’t really a question, and you knew both would happen as soon as she left the kitchen. 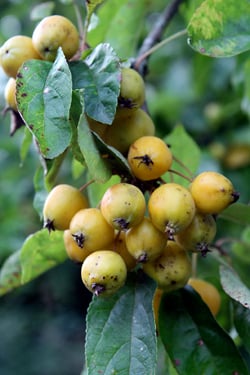 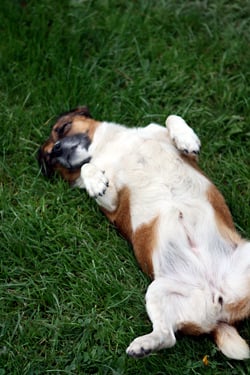 Lest you think it’s all work at Ballymaloe, sometimes all creatures, great and small, do take a pause around there. Dogs aren’t the only ones hard at work at Ballymaloe, but the work the chickens do is important to the school, the garden, and the general cycle of life here. “I feed them kitchen scraps, and a few days later, they give them back to us as eggs” said Darina. 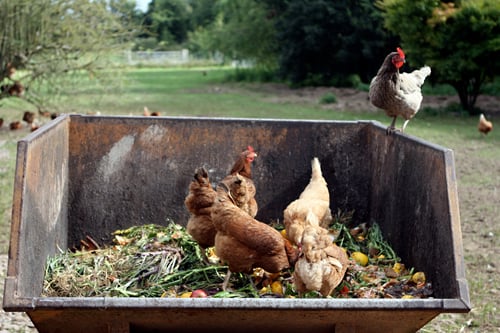 And sure enough, she hefted a full bucket from the kitchen of scraps and we ran to keep up with her as she fed the chickens leisurely plucking around the grounds. In case you’re wondering what came first, the chicken or the egg, there’s no definitive answer. But she told us where her chickens come from. “We have little chicks in the office, in an incubator. They just love it in there—and we love them too.” 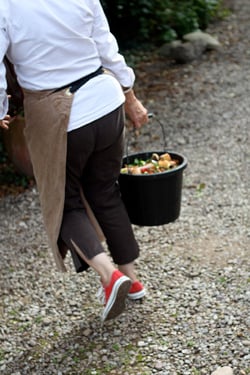 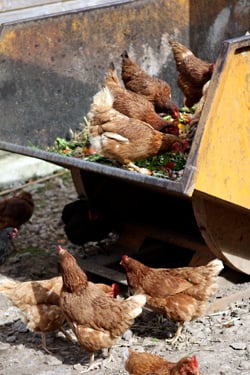 In addition to ten full-time gardeners, everyone works at the farm. When her daughter got married, she put big dishes of peas and shelling beans on the tables and guests shucked their own dinner. (So for those of you planning on getting married and want to cut down on costs, her solution like a brilliant idea.)

Lest you think this is a fantasy place, where folks idly pluck fruit from the trees and fold candy into ice cream, there’s the bright spirit of honest work going on here. A cooking class was taking place, and the room was packed. Some students stay at the school for months, while others come for an afternoon. 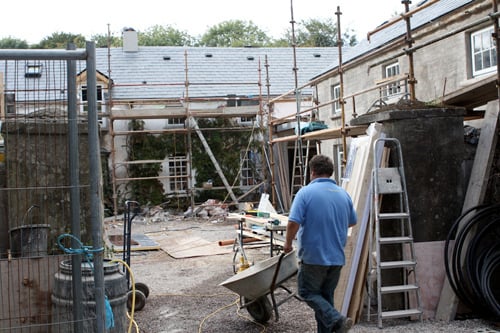 We passed the housing for guests, that was under massive construction, as you can see. Judging by our quizzical looks, “Oh yes,” she confirmed, “they’ll be done by Sunday. They have to be; we have guests coming at 3pm who are staying there.”

Normally I would have said, “Um, lady, have you ever dealt with contractors before?” But she must have read my mind, “Yes, of course they’ll be done.” I didn’t see how that would be possible, but when she went over to talk some of the workers, you could see how much they were attached to Ballymaloe and how they respected her.

But I also saw how they got fed during lunchtime and I’m sure that none of the other places they work feed them like this. 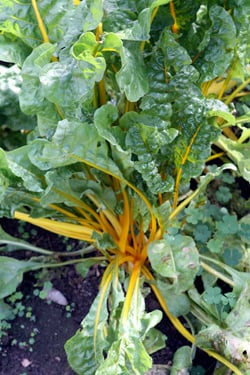 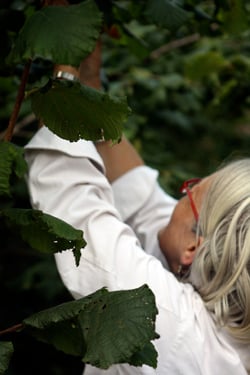 Ballymaloe is situated in the middle of a hundred acre organic farm. One section, the newest, was rows and rows and rows of thorny bushes, a few bearing the last hazy-red, plump raspberries of summer. “Oh, I love raspberries so much, but couldn’t find enough organic berries. So we planted a whole lot of them! Isn’t it just lovely?” 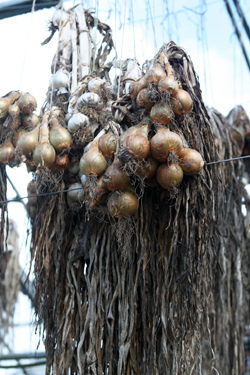 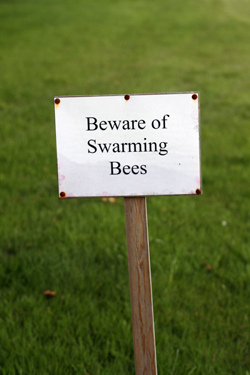 Before we went into their greenhouses, where onions were drying from the rafters (which gave me a fright; I first thought they were bunches of shrunken heads—perhaps the remnants of contractors who didn’t finish on time…or as a warning to those who don’t?) and Swiss chard in a variety of brilliant colors was shooting out from the dirt, I had to get a picture of the sign warning about the bees. I guess bees like organic raspberries, too. 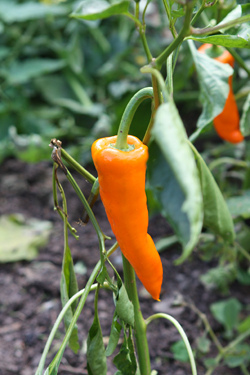 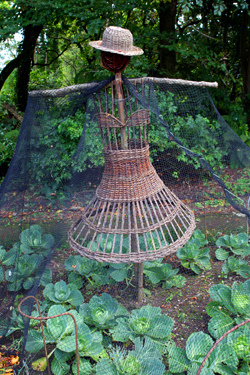 I am making plans to go back in the spring to take Darina’s foraging class. (And I’d love to teach a class…fresh organic raspberry ice cream anyone?) Just the idea of running around the gardens foraging for wild ingredients with Darina, then making rose hip syrup, nettle soup, sloe gin (!), and damson-blackberry jam sounds like too much fun to me. I’m already exhausted, and excited, just thinking about it.