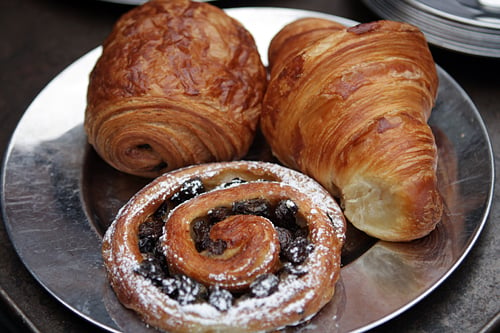 Wow. I go to a lot of bakeries, but I’m rarely wowed all that much anymore. Living in France, where there is literally a bakery on every street corner (and a few on each block, in between the corners..), it’s not that I’ve become blasé. But to me, a bakery is more about just racks or showcases of pastries, lined up, then dropped into bags and sent off with a customer. 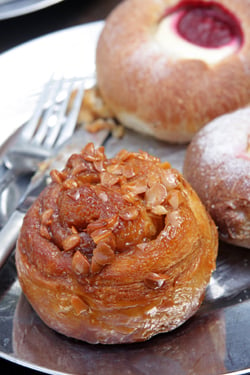 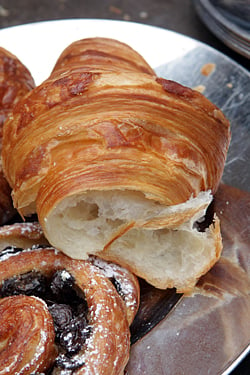 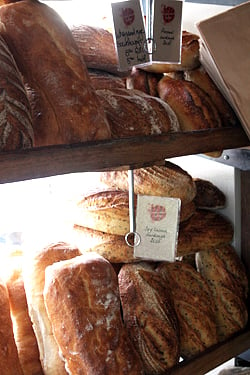 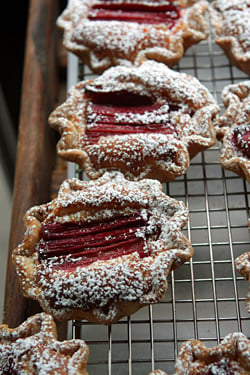 Without getting all gushy, bakeries are really parts of communities; places where people get their bread, but also places where friends gather for coffee or a snack. And as soon as I pulled up in front of Bourke Street Bakery here in Sydney, I felt it was somewhere very special.

When I arrived, (relatively) early in the morning, lots of people were lined up, waiting to pick up a morning pastry or a coffee to share with friends outside at one of the wooden and steel tables parked on the sidewalk. Because I don’t have any friends here – although I’m desperately working on changing that… – I was fortunate to come with a group of cooks and food writers who are also in Sydney for the food festival, so we got a chance to try almost everything, courtesy of owners Paul Allam and David McGuinness, who started the bakery in 2004. 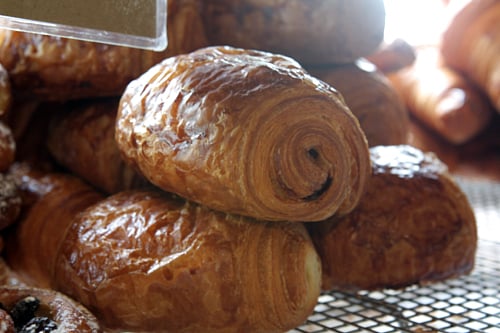 It was always my dream to open a bakery, until I was having lunch with two friends who owned bakeries back in California, who practically replied in unison when I told them of my plans – “Really? Why don’t you come run mine for two weeks – so I could have a vacation.” 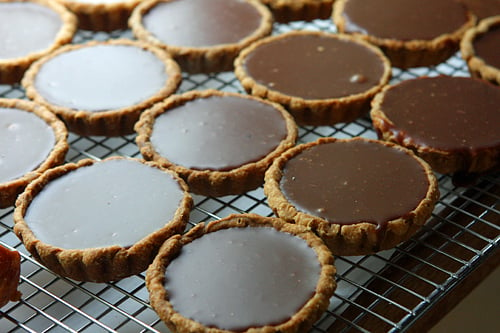 And that (well, kind of) cured me of that. But although there was a slight bit of terror in the eyes of both Paul and David, when I asked how much work it took to start their fantastic bakery, it was obvious from the spread in front of me that whatever they went through in the past, they are now squarely on top of their game. And it’s not just one of the best bakeries in Sydney, but one of the best in the world. When I was in London at Nopi, owner and chef Yotam Ottolenghi said that no matter where else I went in Sydney, I had to go to Bourke Street Bakery. And he was right. 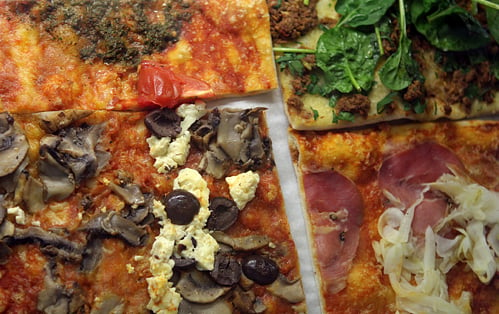 I didn’t reach for the fresh ginger crème brûlée tartlet first, but when I did, the runny custard inside spilled out, under a just-right crackly surface of brittle caramel. As a big (big) fan of fresh ginger in dessert, they got the spiciness spot-on. As a (big) bigger fan of marshmallow, I was happy to see it hiding under a thick layer of chocolate in another tartlet. (Although I’d be happy to skip the raspberries in there, and just go for it with the chocolate and marshmallow combination, because I’m not such a big fan of chocolate and raspberries.) 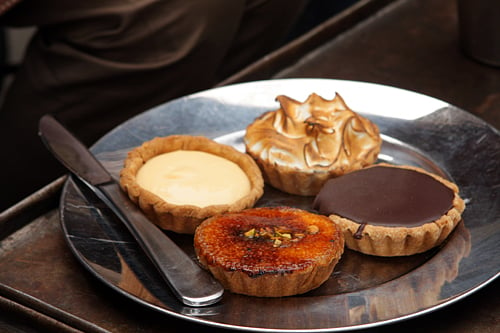 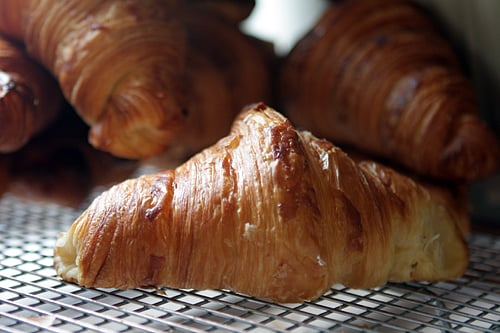 I rarely eat croissants when I travel simply because I live in France and they’re available on every street corner bakery. And I want to try something else when I’m out of the country. But their croissants and pain au chocolat were so, so beautiful, with their swirls of baked yeasted pastry dough scrolled around itself, that I had to sneak a corner of one. The bread was wonderful, too, and rivaled anything I could get back home in Paris. 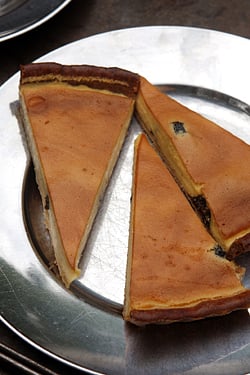 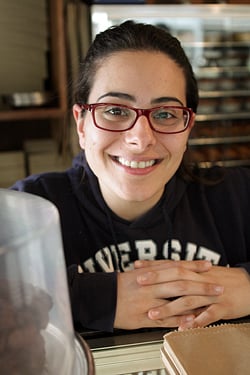 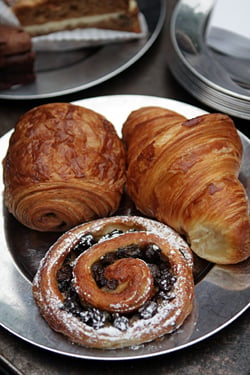 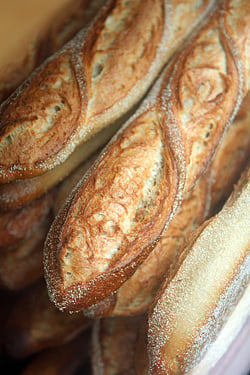 I’m not going to mention the Custard Tarts with Prunes, simply because folks will want to recipe and since they use 45% Australian cream, which I’ve not seen outside of this country, it’d be pretty hard to make them anywhere else. (For those who wish to give them a go, the recipe is in their book, Bourke Street Bakery: The Ultimate Baking Companion, as is the recipe for the ginger brûlée tartlets.) 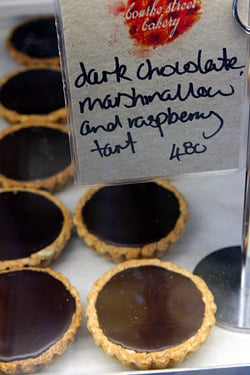 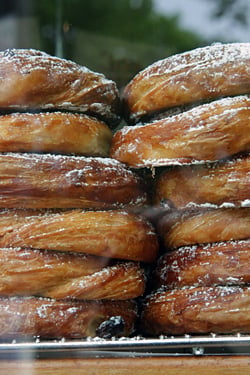 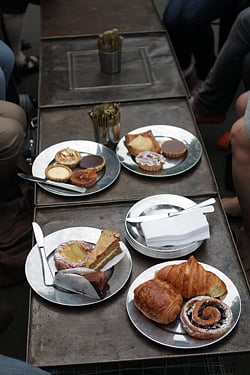 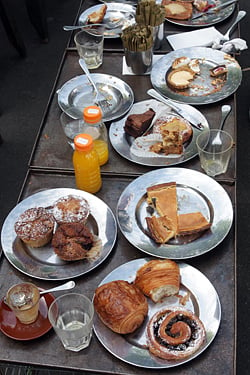 My biggest regret is that even though we managed to eat our way through practically everything in the shop, I missed the savory tarts and baked good, which start coming out of the ovens at 10:30am. But since this was my third breakfast of the day, I figured it was a good excuse to go back. And I certainly plan to head over once again before I leave. Or maybe twice. 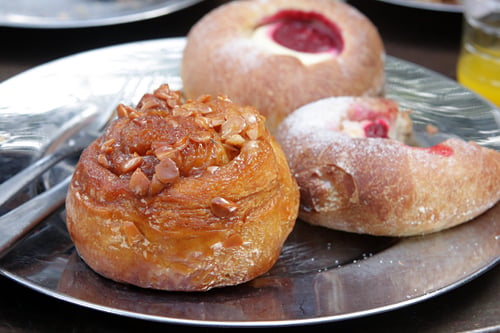