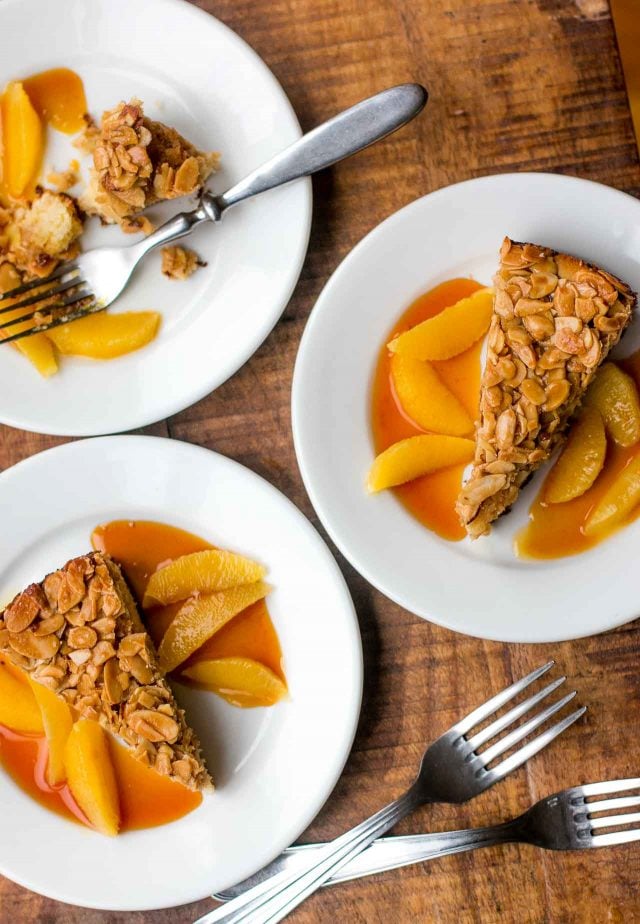 I’ve seen (and eaten!) cakes topped with caramelized almonds in several countries in the world, but never took a try at one myself. I love anything covered with crunchy, nutty, caramel (Including the famed Chez Panisse almond tart), and after dreaming about the many variations of this that I’ve tried, the time seemed right to finally tackle making one myself. 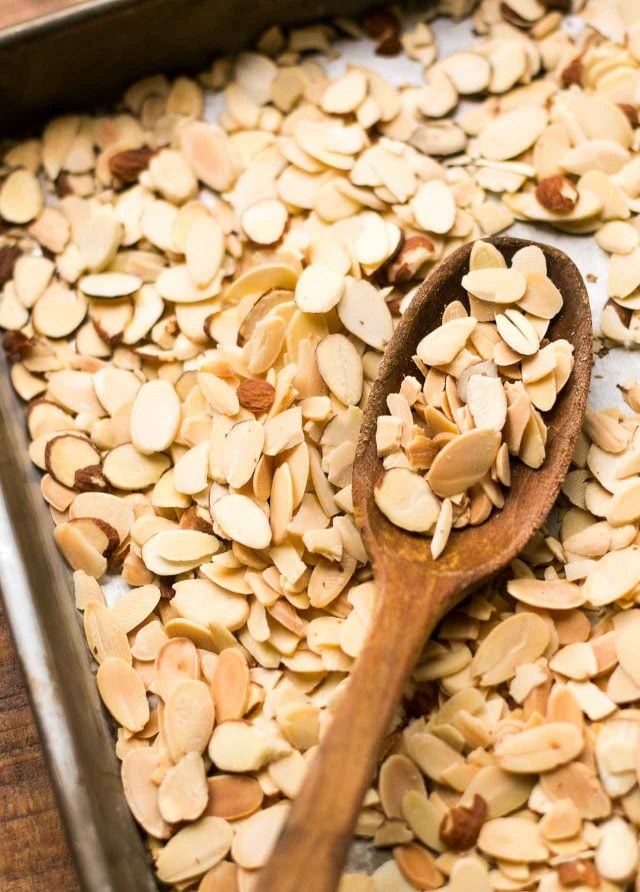 I tried a few similar cakes, one from a newer cookbook that didn’t work. After baking the cake with the almond topping for over an hour, I was still left with a bone-dry scattering of sugary almonds over a rather expensive batter that was loaded with almond paste and butter. I can find a use for anything, rather than throw it away, but it wasn’t even good for a trifle. It’s now compost and hope that it comes back as something more successful for someone else. 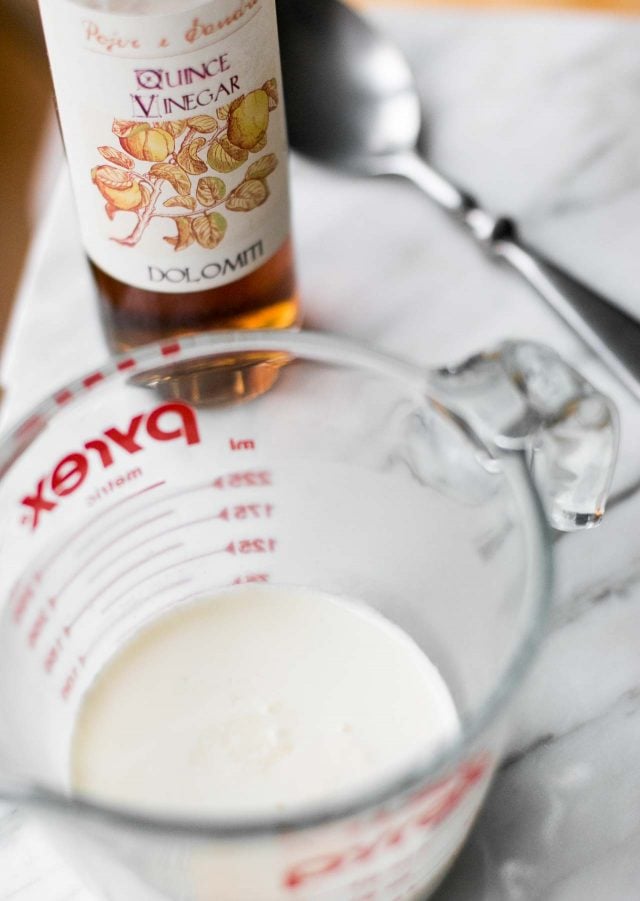 This is one cake you won’t toss. In fact, after I ate one-quarter of it by myself the day I made it, I passed half of it off to a neighbor. (I still kept one more quarter of it for me, though.)

I saw this many years ago on Poires au chocolat, a lovely (and now defunct) blog from a sweet young woman in Switzerland, Emma, who I met when we spoke together on a panel in Europe. It’s called Toscakaka, adapted from Scandilicious Baking by Signe Johansen. And it’s the cake of my dreams. 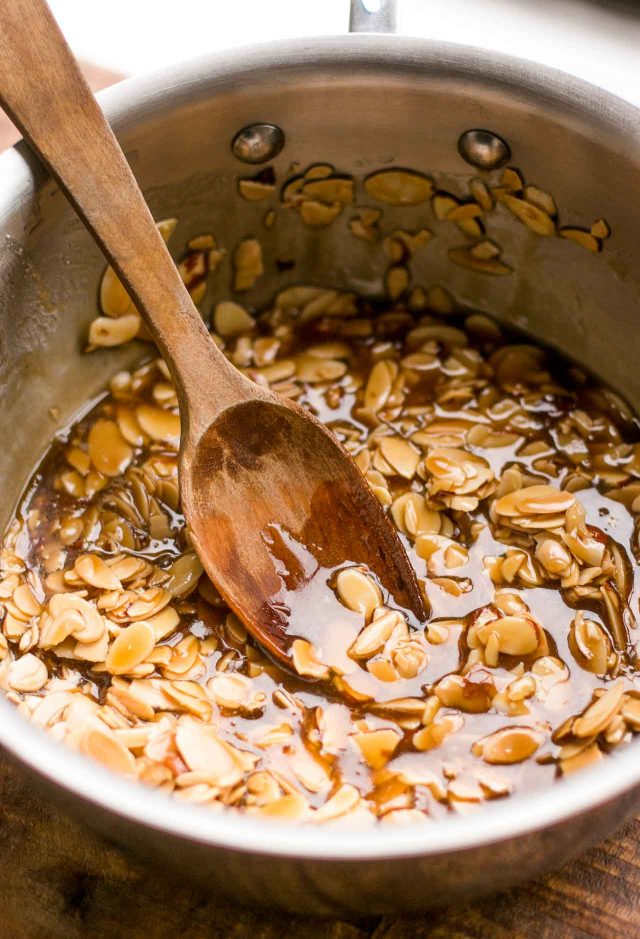 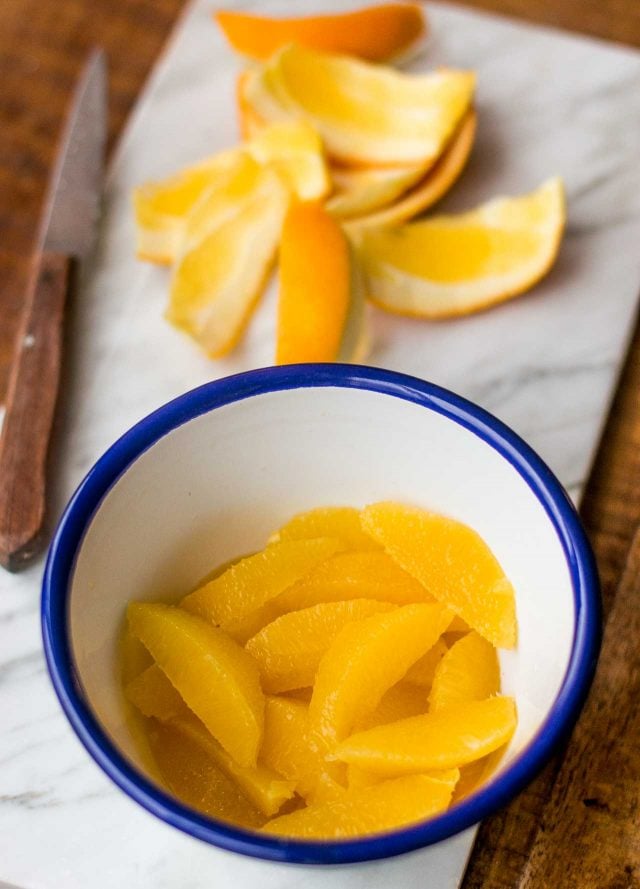 This gorgeous almond-topped cake is great to snack on, just on its own – or perhaps with a cup of coffee for your daytime coffee and pastry break, which the Swedish call fika – and you do take a daily coffee and cake break, right? Or it can be dressed up with berries or fruit on the side, a drizzle of citrusy caramel, poached pears, and perhaps a scoop of ice cream, if you want to really take it to stad (town, in Swedish). 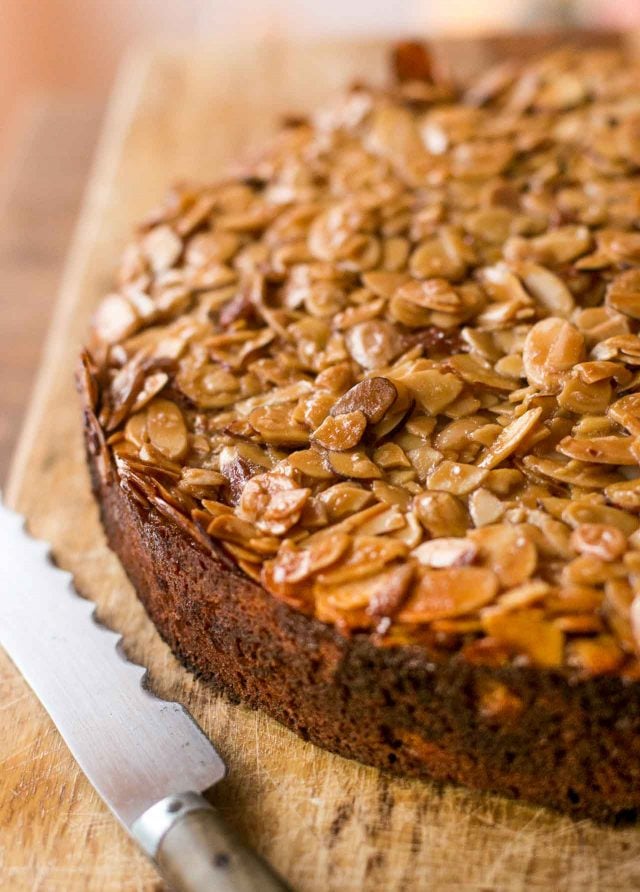 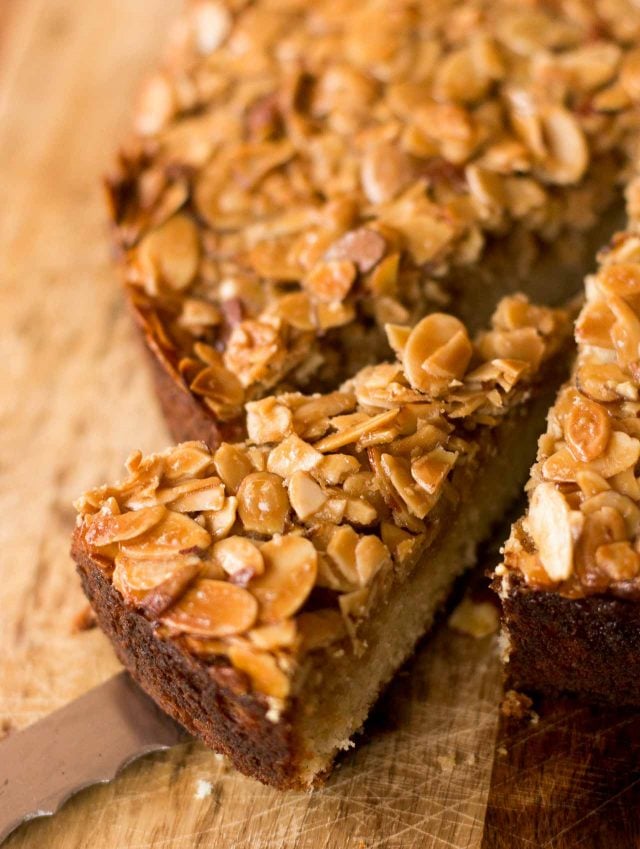 Adapted from Scandilicious Baking by Signe Johansen A few tips: You can use blanched or unblanched sliced almonds. Either will work fine. I toasted mine, which were a mix of the two, in the oven while I was putting together the cake batter. They'll take about 8 to 10 minutes 325ºF (160ºC), stirring them once or twice during baking so they toast evenly. After melting the butter for the cake batter, you can use the same pot again for making the caramel-almond topping. So no need to wash it in between. Yay for less dishes! In step #5, you could sift the dry ingredients over the whipped eggs when folding them in, to disperse the ingredients, to avoid lumps. I didn't have any issues, but that's extra-assurance, if you'd like to be more careful. The topping is quick to put together and should be done as the cake is baking. Ideally it should still be warm when you're ready to spread it over the cake and if it cools down, you can gently rewarm it before you spread. (The heat of the just-baked cake will help it spread, too.) People often ask how to remove a cake from a springform pan to slide it on a serving platter. This is a fairly sturdy cake, once cool, so you can use a wide spatula to slide the cake from the bottom of the pan, and pull the paper off, before transferring it to a cake plate. Alternatively, you can invest in a glass-bottom springform pan.
For the cake
5 tablespoons (75ml) milk, whole or lowfat
1 teaspoon white or cider vinegar, or lemon juice
5 tablespoons (2 ounces, 75g), unsalted butter, cubed
3/4 cup (150g) granulated sugar
1 teaspoon vanilla extract
3 large eggs, at room temperature
1 cup plus 1 tablespoon (150g), flour
1 teaspoon baking powder, preferably aluminum-free
1/8 teaspoon salt
For the caramelized almond topping
1 1/2 cups (150g) sliced almonds, lightly toasted (see headnote)
8 tablespoons (4 ounces, 115g), unsalted butter, cubed, at room temperature
2/3 cup, packed (125g) light brown sugar
1/4 cup (60ml) whole milk
1/2 teaspoon vanilla extract
1/2 teaspoon salt
For the cake
1. Preheat the oven to 325ºF (162ºC). Butter a 9-inch (23cm) springform pan and line the bottom with parchment paper.
2. Mix the milk with the vinegar or lemon juice in a small bowl or measuring cup, and let stand for 10 minutes at room temperature.
3. In the bowl of a stand mixer fitted with the whip attachment, beat the eggs, granulated sugar, and vanilla until it holds its shape when you lift the whip and the batter falls back on itself, about 5 minutes. Melt the butter in a medium saucepan. Remove from heat and set aside, but don't let it get too cool. (You want it to be as close to tepid as possible when you fold it into the batter in step #7.)
4. Whisk the flour, baking powder, and salt together in a small bowl.
5. Using a flexible spatula, carefully fold one-third of the dry ingredients into the whipped eggs, being careful to deflate it as little as possible. Fold in half of the soured milk, then fold in another one-third of the dry ingredients.
6. Fold in the remaining milk, then the rest of the flour mixture.
7. Dribble in the tepid, but still liquid butter into the batter, carefully folding it in as you go, just until it's incorporated. Be sure to reach the bottom of the bowl as you go, to avoid unincorporated lumps of flour. Don't overfold – better to have a few lumps than to deflate the batter. Transfer the batter carefully into the prepared pan and bake until it feels just set in the middle; a toothpick inserted into the center will come out clean, about 30 minutes. Remove the cake from the oven and increase the heat of the oven to 390ºF (200ºC).
For the caramelized almond topping
8. While the cake is baking, make the caramel-almond topping by melting the butter in the saucepan along with the brown sugar, milk, vanilla, and salt. Bring the mixture to a boil and cook for 2 minutes, or sooner, until it starts to thicken. Remove from heat and stir in the toasted almonds.
9.. Scrape the mixture over the cake and gently coax it over the top of the cake, reaching to the sides of the cake pan. Avoid applying any pressure so you don't break through the top of the cake underneath.
10. Put the almond-topped cake back in the oven and bake until the caramel between the almonds starts bubbling up thickly between the almonds, about 8 to 10 minutes. Remove from oven. After 5 minutes, run a knife around the outside of the cake to release it from the sides of the pan then let the cake cool completely before serving and slicing.

To make the orange caramel sauce, heat 1/2 cup (100g) of sugar and 1/4 cup (60ml) of water in a skillet or saucepan. (Read my post How to Make the Perfect Caramel for specifics.) Cook the sugar, tilting the pan only if necessary, encouraging the sugar to melted. Continue cooking until the sugar turns a rich, amber brown color. Remove from heat and gradually pour in 1/3 cup (80ml) orange juice, being aware it may splatter a bit.

Stir the caramel gently over low heat until smooth. If there are still little bits of undissolved sugar or caramel, strain the sauce through a mesh strainer. Let cool to room temperature. The caramel can be made up to two weeks in advance and stored in the refrigerator.

The cake will keep for up to three days at room temperature, if well-covered. 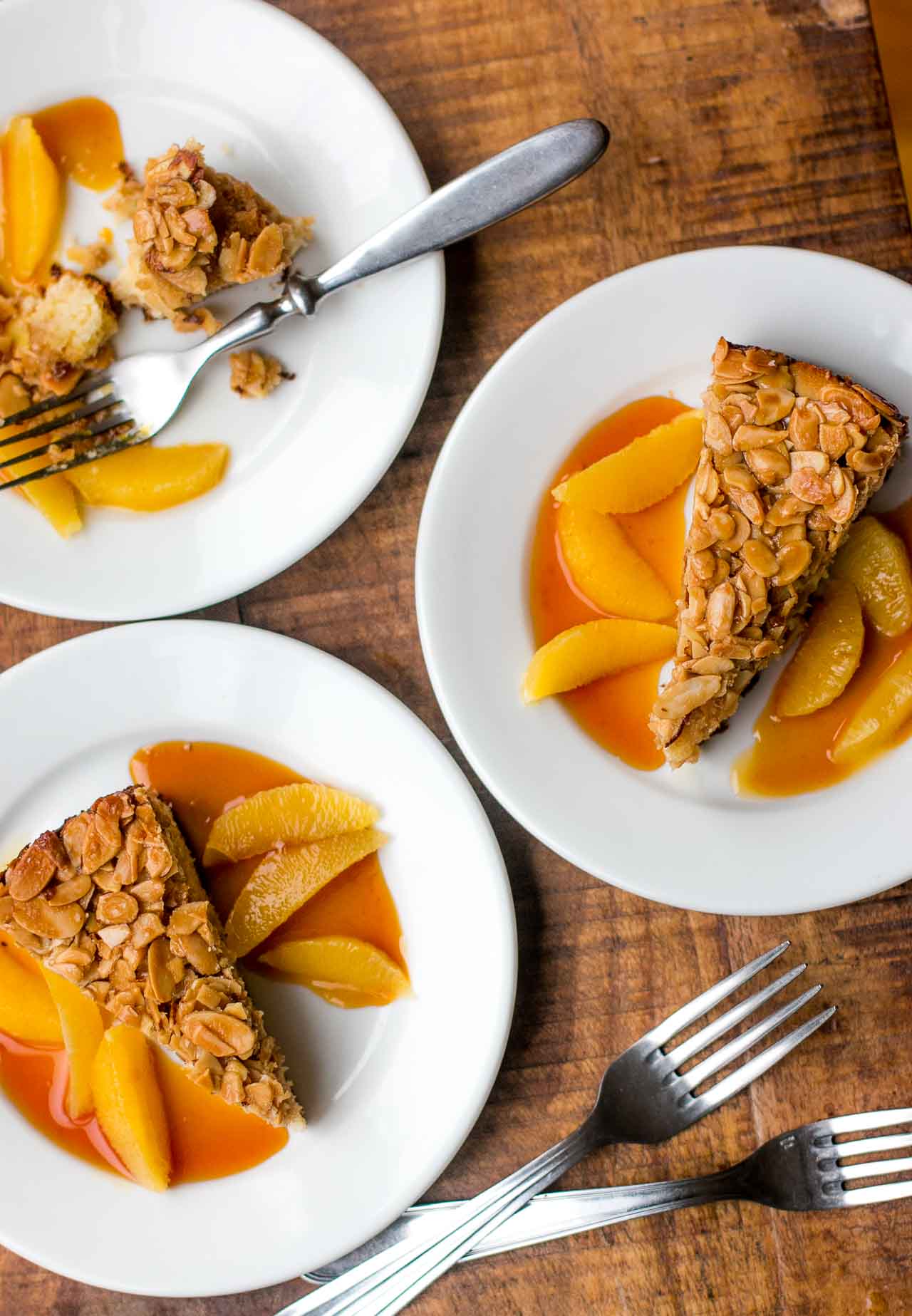