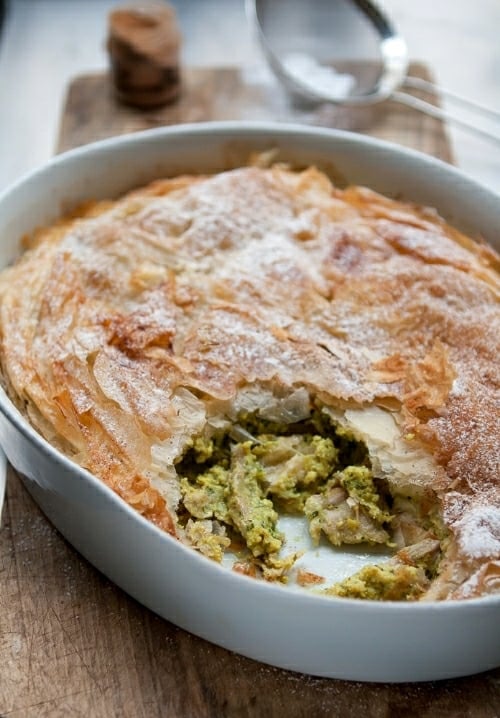 When I went to get the chicken to make my bisteeya, I wanted to follow the recipe to a T. So I went to the butcher to get a precise amount of chicken in grams. Since I wasn’t sure what one chicken thigh weighed, I took a guess that I might need 3 or 4 thighs. Judging from the reactions I get when ordering things by weight, they don’t get a lot of recipe-testers or cookbook authors shopping at my butcher shop. When the butcher put the poulet fermier thighs on the scale to show me, I wavered, thinking that the quantity looked a bit stingy and perhaps I should get a few extra. Then I started thinking (which often gets me into extra-trouble), “Well, since I’m here, I may as well get a few more.” 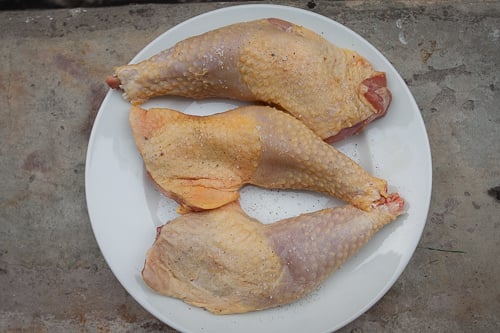 So I asked if he could add a few more, to make it five thighs. He started getting confused, and thinking he heard me wrong the first time – because of my American-accented French – he said that I kept changing my mind. (And heck, at this point, even I was getting confused. And maybe you are, too.) So he finally asked me – what did I want, exactly? 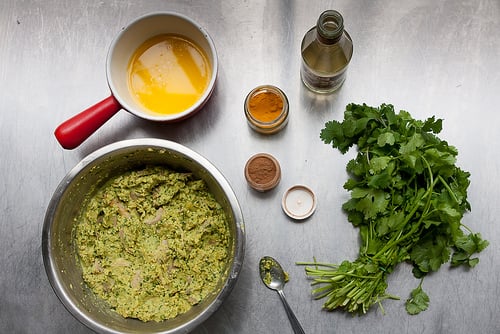 I said, “Cooking is about change, monsieur” which elicited a grin and a chuckle from him. Asking about my accent, and wondering where I was from, I said “San Francisco”, then I asked him where he was from. Even though there was a line of shoppers behind me, his reply was to ask me to guess. (No wonder lines are so long in Paris.)

Being a butcher shop in an Arab quartier, I first tried Lebanon, then Afrique du Nord, which he shook he had at. Then I said “Afrique du nord.” He shook his head no, and said that he was from Algeria.

(I didn’t correct him, but I thought Algeria was considered North Africa. So you learn something new every day around here.) 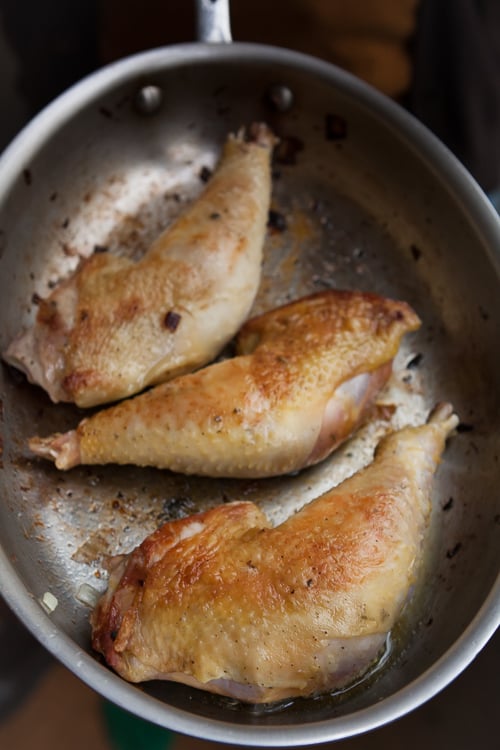 Another thing I learned, courtesy of the fellow standing next to me, who when he heard that I was American, chuckled and expressed surprised out loud that I cooked. Coming from a city with stellar cuisine, much of it made with locally produced ingredients, I turned to him and said, “Yes, Americans cook. And many of them are the best cooks in the world” and turned away. Touché, dude. 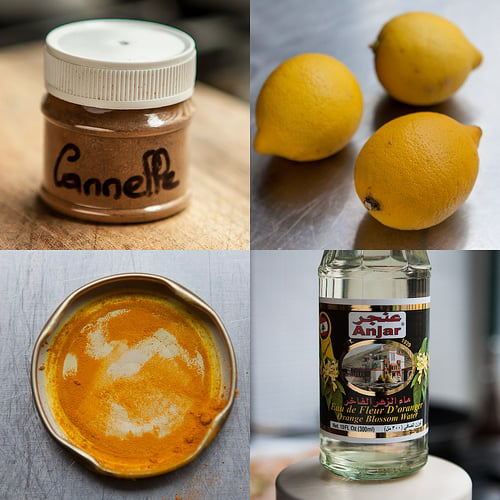 Speaking of people from other countries who are fabulous cooks, is Bethany Kehdy. Although she was born in the United States, she spent a good deal of her life in Lebanon with her Lebanese father, cooking with relatives. And I don’t give a hoot where she’s from – she’s a fantastic cook. I went to Lebanon with her and ate amazingly well, including a delicious dinner spread that she prepared. So I am especially excited that she has a cookbook out, Pomegranates and Pine Nuts (titled The Jeweled Kitchen in the United Kingdom), which is one of the few cookbooks I have in my collection that makes me want to make each and every dish in it.

In her introduction, she talks about how Middle Eastern cooking often doesn’t get the same consideration as more lofty cuisines. And that no matter what you do, someone is going to tell you there is a different – or better – way to do it. That’s been my experience as well and there is always a better place to go to, or a better way to cook something. 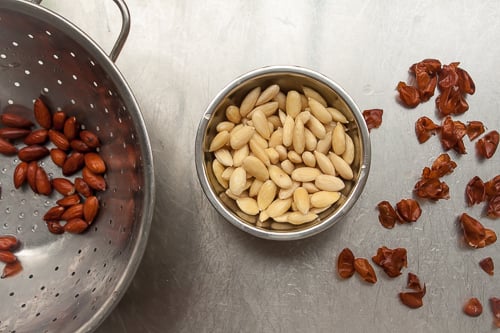 Basteeya is often made with pigeon and I distinctly remember my a friend’s mother back when I was a teenager, returning from a trip to Morocco and telling us how she ate pigeon. I was so disgusted – I couldn’t imagine anyone eating pigeon. But to prove that even the most closed-minded of people can change (I’m looking at you, monsieur, in the butcher shop…) pigeon is now one of my favorite foods. 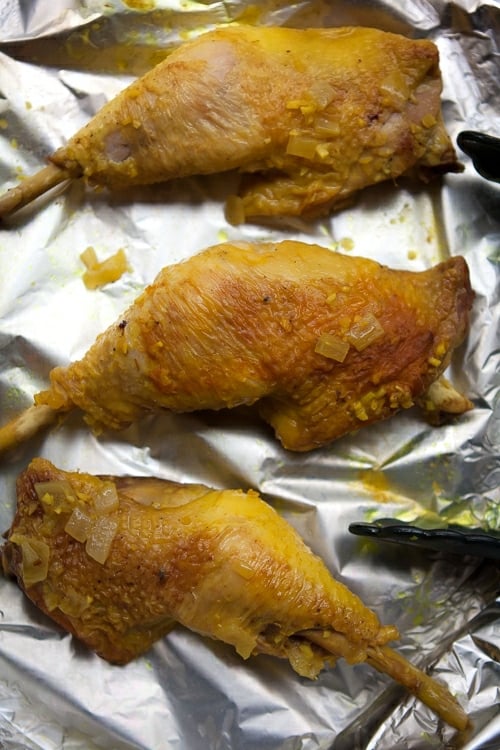 Pigeon is also a nickname for “chump” in France, so much so that when the current President launched initiatives to impose hefty taxes for start-up entrepreneurs, a group who named themselves les pigeons launched an online protest. Although we’ve got no shortage of the winged kind of pigeons in Paris, either, this recipe uses chicken – which is a little easier to track down. Because there are different ways to do just about everything, don’t feel like a pigeon if you use poulet. 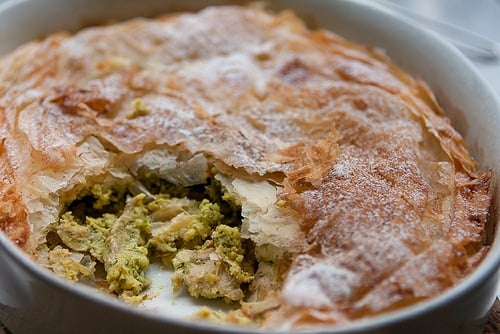 Adapted from Pomegranates and Pine Nuts by Bethany Kehdy I used poulet fernier, or farm chicken, whose parts are smaller than their commercial counterparts. Depending on the chicken you have, you’ll need 2 or 3 thighs; you can weigh them for more precise results, if that floats your boat. Bethany’s recipe calls for either ground saffron or turmeric. I used turmeric but if you have saffron on hand, you can certainly use that. This isn’t a complicated dish at all, but does have a few steps that might seem unfamiliar the first time you do it. You can make the filling up through step 5, then refrigerate it overnight.
1 1/4 pounds (600g) chicken thighs (leg and thigh attached), 2 to 3 thighs depending on size
Salt and freshly ground pepper
2 tablespoon vegetable oil or clarified butter
1 medium onion, peeled and diced
2 cloves garlic, peeled and minced
2 inch (5cm) fresh ginger, peeled and minced
1/2 teaspoon ground turmeric
2 cups (500ml) water
4 eggs
1 cup (120g) scant blanched almonds (see Note)
3 tablespoons powdered sugar
1/8 teaspoon ground cinnamon
1 tablespoon orange flower water
Zest of 1 lemon and the juice of 1/2 of the lemon
1/4 cup (15g) chopped parsley
1/4 cup (15g) chopped cilantro
7 sheets of filo dough, thawed, if frozen
5 tablespoons (70g) melted unsalted butter
Additional powdered sugar and cinnamon, for dusting the finished basteeya
1. Season the chicken with salt and pepper and set aside. Heat the oil or melt the clarified butter in a heavy skillet or sauté pan that has a lid. Add the onions and cook, stirring occasionally, until soft and translucent – about 5 minutes.
2. Scrape the onions onto a plate and add the chicken to the pan, skin side down. Cook the chicken until browned on one side, then turn the thighs over, and brown them on the other side. It should take 10 to 15 minutes.
3. Add the onions back to the pan along with the garlic, ginger and turmeric, and cook, stirring, for about a minute to release the fragrance. Add the water, cover, and let the chicken simmer for 30 minutes, or until cooked through.
4. Remove the chicken from the stock and let cool. Reduce the pan liquid by half over medium heat. Stir the eggs together in a bowl then pour the eggs into the warm liquid in a steady stream, stirring as they hit the liquid. Keep stirring until the mixture resembles softly scrambled eggs, about 3 minutes. Remove from heat and scrape the egg mixture into a bowl. Remove the skin and the meat from the chicken (discard the skin), and shred the chicken into the egg mixture.
5. Grind the almonds in a food processor until they are a coarse consistency, almost to the point where they are about to become a paste. Add the powdered sugar and cinnamon, pulse a couple of times, then add the ground almonds to the chicken mixture along with the orange flower water, lemon zest, and chopped parsley and cilantro. Taste the mixture, and season with salt and pepper, if necessary. (At this point, you can refrigerate the mixture overnight.)
6. Preheat the oven to 375ºF (190ºC.) Butter a 12-inch (30cm) baking dish.
7. Unwrap the filo and drape a damp kitchen towel over it to prevent it from drying out as you work. Working quickly, lay one sheet of filo dough over the bottom of the baking dish, coaxing it to line the bottom and up the sides of the dish. Brush the filo with melted butter. Add three more sheets of filo dough, brushing each one with a layer of butter, except for the final one.
8. Spread the filling in the baking dish, then fold the ends of the filo dough over the filling. Brush the exposed pieces of filo dough with melted butter. Top the filling with three sheets of filo dough, brushing the top of each sheet of dough after you place it over the filling.
9. Tuck the edges of the top sheets of filo as best you can under basteeya, trimming the edges if it makes it easier. (You can also just fold them over the top, and press them down.) Brush the top liberally with butter and bake the basteeya for 30 to 40 minutes, or until the top is well-browned.
Remove from the oven and dust liberally with additional powdered sugar mixed with a generous pinch of cinnamon. Serve with a green salad or tabbouleh.

Note: You can buy almonds already blanched, although I usually keep only regular almonds on hand, so I use those. To skin whole almonds, bring a small pot of water to a boil. Add the almonds and let cook at a low boil for 1 minutes. Drain the almonds, rinse with cold water, then squeeze the almonds to remove the skins. Toast the nuts on a baking sheet in a 350ºF (180ºC) oven for 8 to 10 minutes, to dry and refresh them.