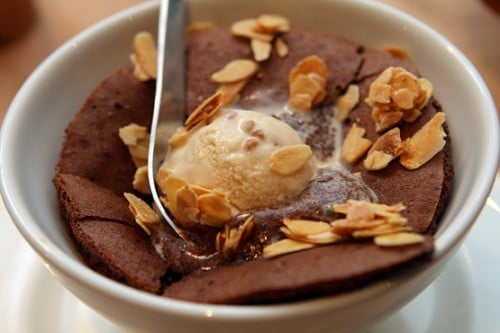 I had some friends over for dinner recently who were moving away, which is always sad, and they were in the full-on stress of moving; packing up boxes, dealing with logistics, selling most of their things, and taking care of the details of deménagement.

I had been leafing through Sinfully Easy Delicious Desserts by chocolate expert (and comrade in chocolate) Alice Medrich, who I was introduced to in the 80s, not personally, but though her spectacular chocolate cakes and confections. Her chocolate shop in Berkeley was changing the way we thought about chocolate in America, and I’d like to think my (near-daily) allegiance to the store, called Cocolat, had something to do with it.

Alice had learned techniques for making French cakes and truffles, and was getting national acclaim for her extraordinary treats sold in the shop. I was such as fan that when I was baking just down the street, at Chez Panisse, I used to stop in on my way to work for a truffle or a slice of cake. And I finally had the chance to meet Alice, and she became one of my dessert heroes, coming out with some of the best books on baking you can get your hands on. And if you’re anything like me, before long, those hands are likely to be smeared with a little bit of chocolate. 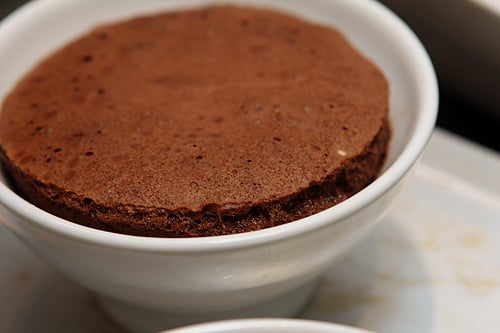 Sinfully Easy Delicious Desserts is meant to be more of a casual venture for home cooks. A kind of chill-pill, you could call it. So if you’re OCD about baking, substitutions, equipment, measurements, making thing in advance, or whatever, you can simply relax – and breathe. Breathe…

These desserts are meant to be made without machines or stand mixers, using ingredients most people already have in their pantries. It’s “freestyle” baking, and although she presents an excellent recipe, the recipes have a lot of leeway built-in, so you can go off on your own in whatever serendipitous and chocolatey (or other) direction you want to go in. 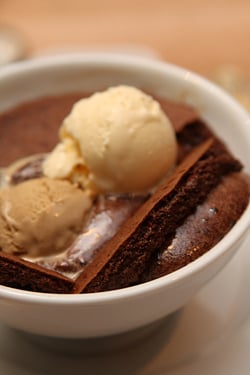 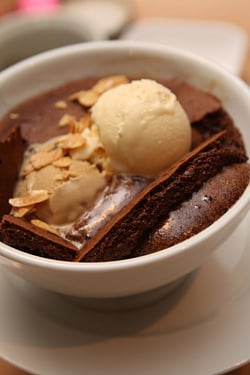 I was attracted to this dessert because I had all the ingredients on hand – chocolate, butter, eggs, and sugar – which is part of the idea of this book, and because I love chocolate almost as much as Alice. I also like the fact that these can be made in advance, chilled, then brought to room temperature and baked right before you need them. Which is exactly what I did for my dinner guests.

(Although in retrospect, serving a molten chocolate cake in a hot bowl to a couple with an active toddler wasn’t the best idea. Neither was the spicy North African stew I made either. But at least it will give my friends something to remember me by, although I think I may have traumatized their child.) 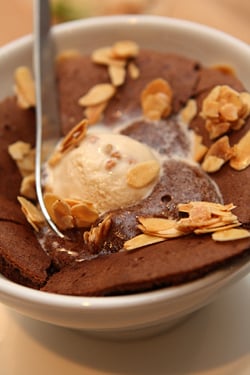 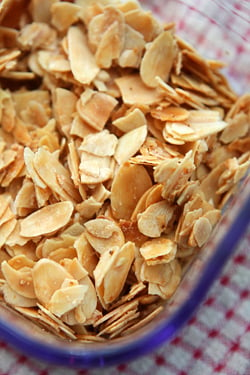 I topped the hot chocolate puddings with a scoop of frosty buckwheat ice cream and a flurry of quick-candied almonds (recipe in The Perfect Scoop), although you can use regular toasted sliced almonds, which probably aren’t as likely to disappear before guests arrive, and the bowls were scraped clean. 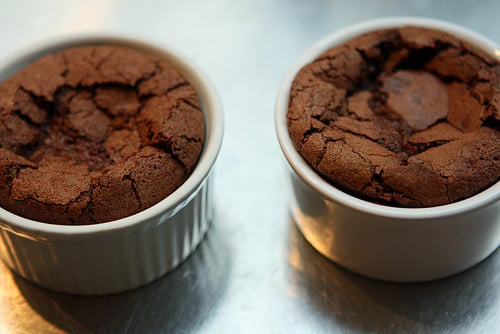 For that evening, I’d made the desserts in heatproof café au lait bowls using the recipe, which resulted in a very soft, molten pudding. Then the next day, I tried them again in ramekins, reducing the butter and sugar a bit, And you can see in the photos that the smaller ramekins came out a little darker and the pudding were a bit more cake-like. So you can do them either way. The proof is in the pudding. 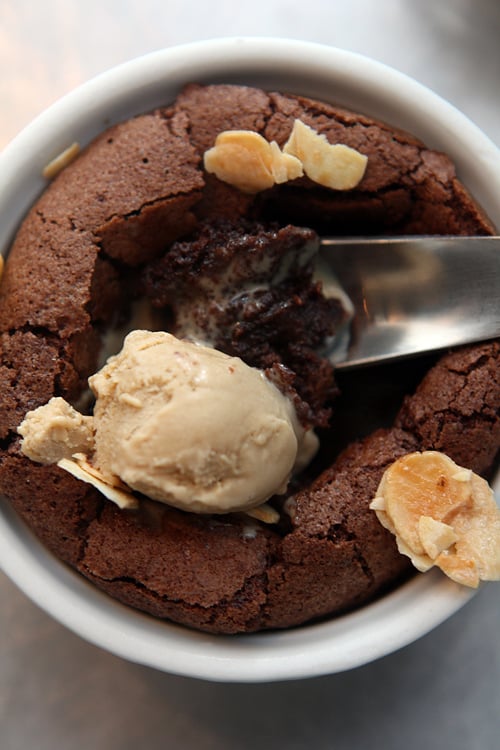 Adapted from Sinfully Easy Delicious Desserts (Artisan) by Alice Medrich. To show how versatile this recipe is, I made them twice, varying the recipe, which resulted in two delicious types of dessert. I dialed down the sugar and reduced the butter, and each one had its own distinct personality. So feel free to use either 3- or 4-ounces of butter, depending on if you want them very creamy (4 ounces) or a little more cake-like (3 ounces.) Baking times will vary based on what kind of vessels you use. And you can fill them as much, or at little, as you wish – depending on how big the portion size you want is. Just bake them until a crust forms on top and a toothpick inserted into the center comes out with some gooey batter attached.
Servings 4 servings

Serving and Storage: These can be served immediately, or according to Alice, you can “let cool, cover, and keep at room temperature for up to a day.” You can likely freeze them and bring them to room temperature before baking, although since they’re so simple to make, I advise making them fresh for best results. Notes: I modified the original recipe, which had 2/3 cup of sugar since I was serving them with ice cream. Reducing the sugar makes them a bit less-moist, so it’s up to you to decide which you prefer. Alice doesn’t butter her bowls but I did the first time, yet not the second, and couldn’t discern much difference, so she likely left it out since it’s not imperative and is one less step.