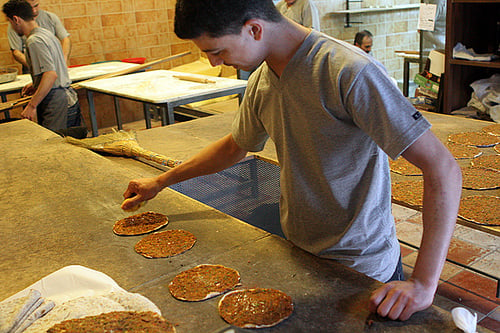 Unbelievably, I was able to fit in not just two breakfasts, but two lunches on my first full day in Beirut. After za’atar croissants and puffy khobz, we headed off to Ichkhanian, to watch the bakers rolling out and baking L’ahm b’ajeen. 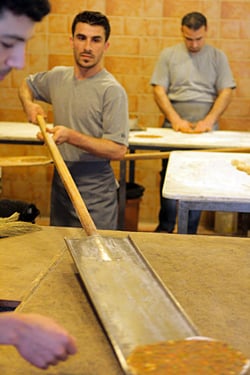 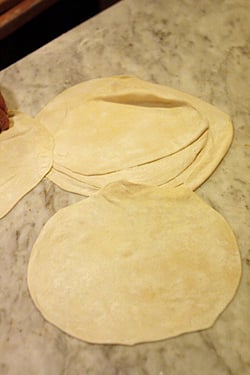 This family owned bakery was started in 1946 and is still run by a mom and her son. A pretty efficient crew, a mix of strapping young men and some older gents – who were just as agile and strong as their younger co-workers – start every day rolling out ultra-thin dough, no thicker than a few sheets of newspaper. The only dough I’d ever seen that was thinner than what I used to buy from a Middle Eastern baker in San Francisco that make filo dough from scratch (whose bakery is, unfortunately, now closed), which made me sad to have to go back to the filo sold in the freezer case. Actually, I was so taken with the fresh stuff that I don’t use filo anymore. Yes, I hold a grudge. 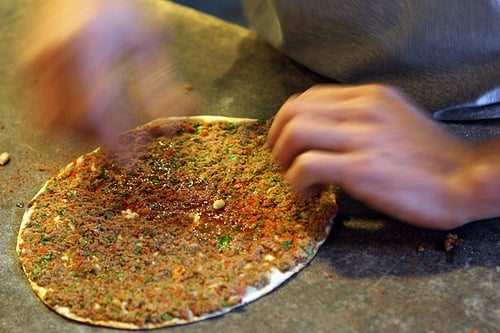 With their ultrathin dough, the bakers make two kinds of roll-ups; One filled with chopped green peppers, allspice, paprika and parsley which is Armenian/Turkish (called Aintibi), and the other is Syrian (called Halabi), made with meat, tomato, and pomegranate molasses. The whole process of rolling, topping, and baking is swift and impressive: honestly, the way these fellows work together would make a Swiss watch look inefficient. 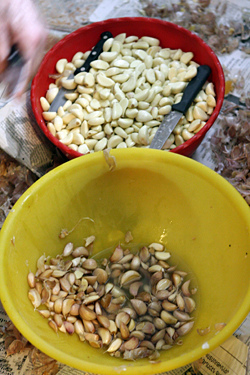 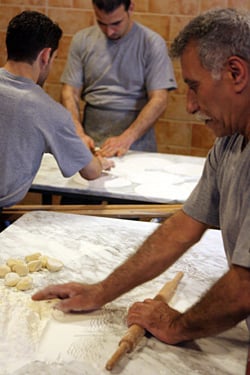 Rounds of dough are tossed on the counter, rolled so thin that you’ll be cursing your (or our) incompetence next time you (or I) tear a sheet of regular pastry or pie dough. A few fingertips of flour dusting over, some quick rolls back and forth, then topping is smeared on before a whole baker’s peel of them is slid into the oven. 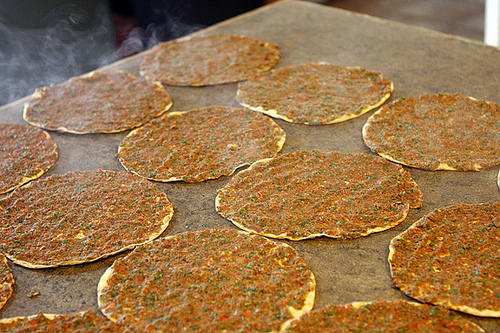 Moments later, out comes thin breads which get rolled up and consumed quickly, often by folks who come in from the neighborhood, who gulp down ayran (a fermented milk drink) along with the hot sandwich, then head out for the day. These kinds of sandwiches are also a popular snack in Beirut, especially late at night – or in the wee hours of the morning – after the bars close and people are in search of something filling…and sobering (from what I hear – I’m in bed by midnight)…to eat. 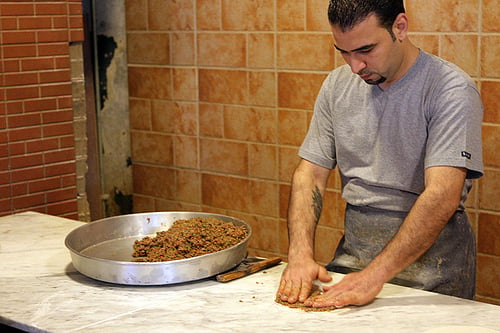 Both packed a nice wallop of garlic and when the baker asked if I liked mine spicy, I said “Of course!” 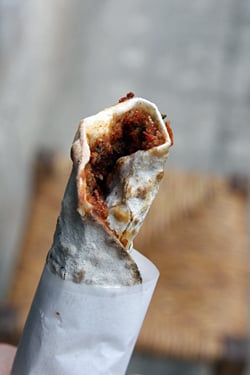 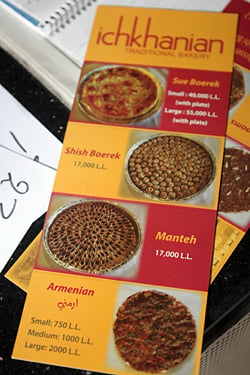 So he dusted my sandwich with a blaze of chile powder, smiled and laughed, and minutes later, my breakfast was nothing but a crinkled up piece of bakery wrap with a few crusty crumbs scattered in the wrinkles. 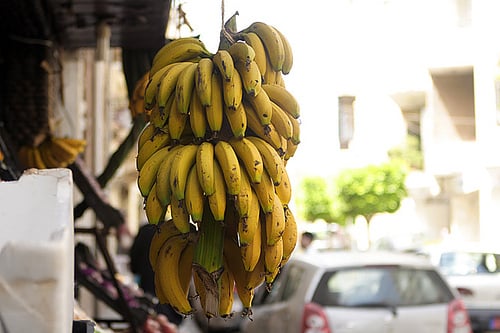 After reluctantly saying goodbye, then walking it off in the older part of Beirut, we landed at Lala Chicken, an excellent snack bar where there were displays of kebabs, skewered with meat, chilis, and tomatoes, ready to be grilled – although we’d come for the famous chicken shawarma. 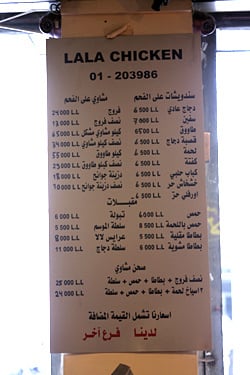 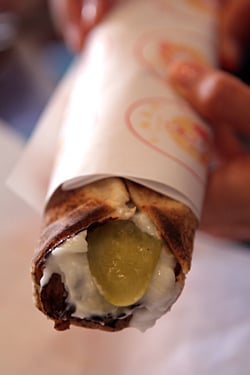 But this just isn’t any chicken sandwich/shawarma. 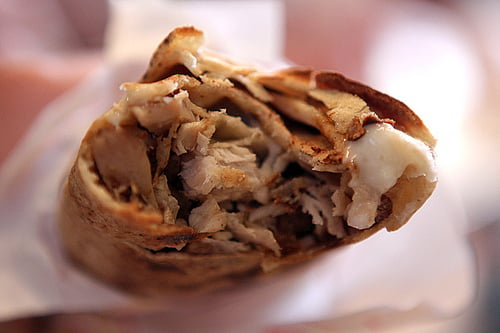 For those who know Zankou Chicken in Los Angeles, you know how addictive toum is, the whipped garlic sauce made by aerating garlic and oil until it’s a light, white spread. More powerful than anything you can imagine, it’s slathered on before the sandwich is rolled up with a few pickles on it, the bracing saltiness of the cukes being a little respite from the slick sauce and warm pieces of chicken meat. 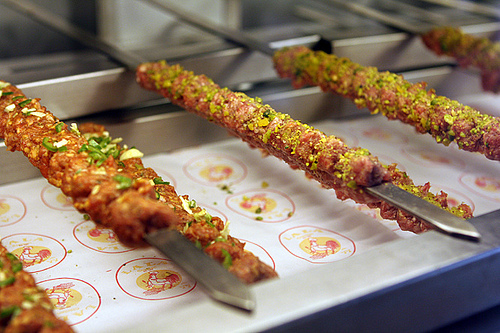 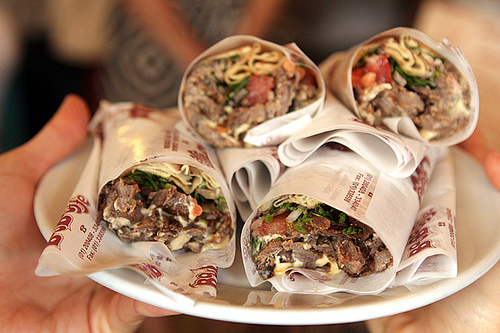 Then is was a hop across the street to BouBouffe, which I was told was the only shawarma cooked over a charcoal fire in town. I would have checked that statement for accuracy, although I’d rather just keep coming back here. 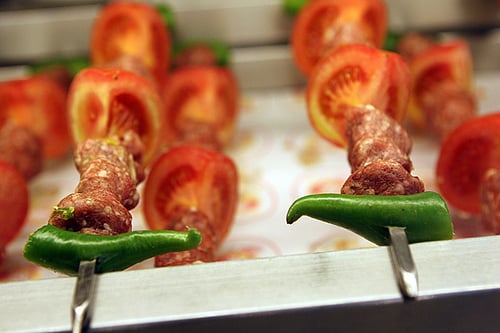 Served with tarator, a tahini-garlic sauce (yes, there’s definitely a garlic theme in Lebanon…), it was pretty tasty. And by then, after two breakfasts and two lunches, I was as stuffed as a… 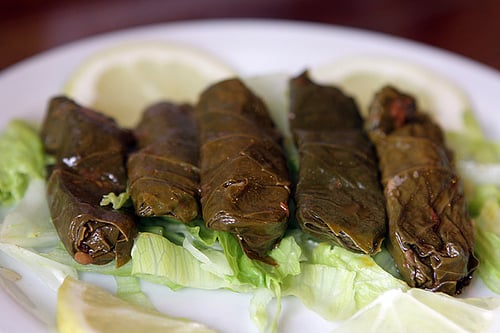