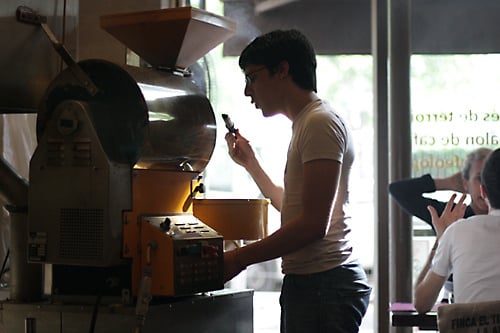 I’ve pretty much said everything I could about the “coffee issue” in Paris here*, but one place that’s trying to buck the trend is La Caféothèque, a shop and café that roasts coffee beans from all over the world. It’s also one of the (very) few places in Paris where I’ve seen a person preparing café express (espresso) correctly, using a tamping device, and actually taking great care with the coffee they’re serving.

A place that roasts and grind their owns beans is no longer a big deal back in America. Of course, it’s gotten a little overdone with all the pomp and circumstance just to get a cup of coffee. (I prefer the Italian model of lining up at the counter, having a quick, well-made shot, then moving on, rather than the whole big to-do in certain places just to get a cup of coffee.) But in Paris, it’s practically unthinkable to roast your own beans, or spend a lot of time preparing the coffee. Yet a few savvy and concerned coffee lovers have opened a handful of coffee shops that specialize in using good beans, properly roasted, and preparing the coffee with care and attention to flavor. It’s a trend that many of us here are hoping will continue. 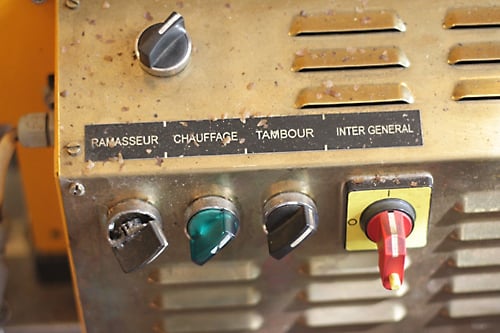 I was meeting a writer who is researching coffee at La Caféotheque, who’d brought me a lovely gift of coffee beans, just-roasted, from one of those groovy coffee places back in the states.

Which was a lovely gesture, but I don’t have a coffee grinder. I used to grind my own coffee for years until I realized that I couldn’t deal with the noise in the morning. (Plus the coffee grinder that was recommended for me by all the coffee people was $359, and to fit it in my kitchen, I would have had to choose between getting rid of my stove or my refrigerator. Um…) 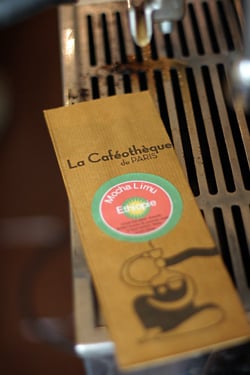 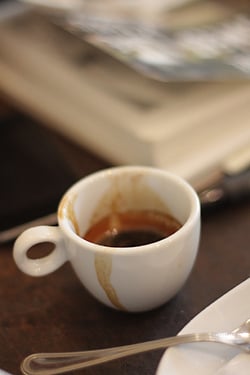 After we had two very good cups of café express (or whatever the plural is in French), I shyly edged my way over to the counter person. Figuring that it might be odd to ask him to grind up some coffee from elsewhere, I gently mentioned that I had been gifted some intriguing coffee beans, and could he possibly grind them for me? I even offered that he was welcome to make himself, and the rest of the staff, a few cups of the coffee to taste for themselves. 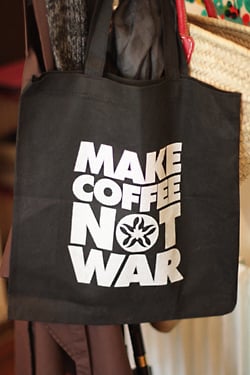 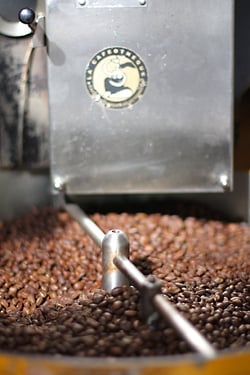 It was one of those moments that I try to explain to visitors that happens if you’re fluid in France, or if you’re traveling anywhere perhaps, and you find yourself having an impromptu experience. It happens when you meet up with people who have mastery of something and they are truly interested in sharing their craft. It’s when chocolatiers invite you into their laboratories (which happened to me this morning, in fact) or a chef pulls you into the kitchen just because you’ve taken the time and shown a little interest. It doesn’t happen all the time, but when it does, I stop whatever I’m doing (and neglect any plans in the immediate future), and stop to learn and listen. 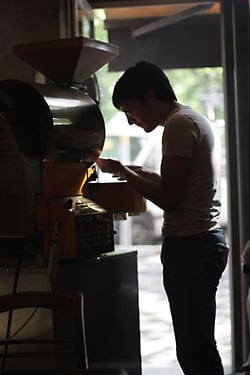 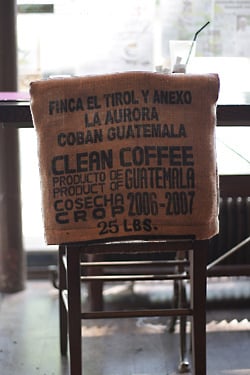 Young sommelier de café and roaster Pierre-Jacques, took a look at the bag, stuck in his hands and grabbed some of the beans, immediately evaluating them by smell and by look. He said that this coffee would be best served prepared in a filter cone, and went off to ready the pot and the coffee. 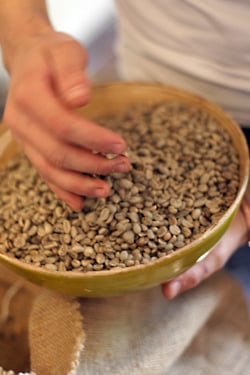 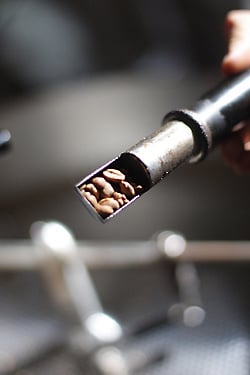 While he was heating up the pot, the porcelain filter cone, and the water, he had the roaster going by the front door. He’d added a measured amount of green coffee beans and let it run until they were at just the right temperature and roast and at various intervals, the timer would go off and he’d bolt from his seat to check the progress of the beans.

The front door of the shop was propped open to allow some of the smoke to escape. But even so, sitting in the front room of the store, you really were up close to the beans. (So if you come, you might want to grab a seat farther away from the “action.”) But people came in from the street, intrigued by the roasting smell, to watch the metal arm of the machine cooling down the hot beans as they poured out of the metal roaster. 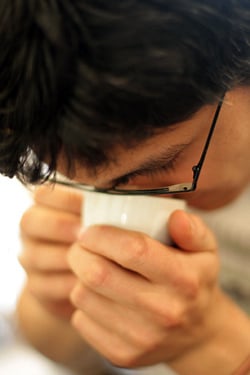 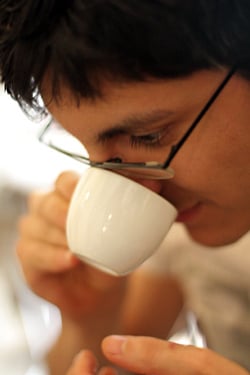 We talked a little about what makes beans special, and how unfortunate is was that coffee was not as appreciated as much for the flavor in Paris as it is for a social drink – and for the caffeine buzz. Without any trace of snobbery, at La Caféothèque, coffee isn’t revered as something trendy, but as a way to connect to the various plantations, and as a way to appreciate beans grown by selected estates.

(That said, many of the coffees served here are more wine-like and sharp, rather than deep-dark roasted, which might be more to the local tastes, who prefer things équilibre.) 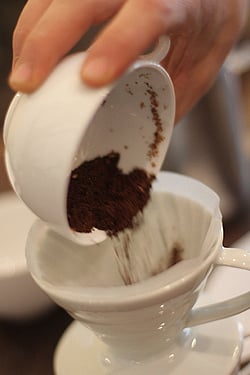 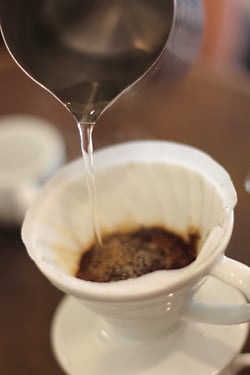 And sure enough after he prepared the coffee, he took a big, deep sniff in the tiny cup to ascertain the flavors. Barley and hops were present and since the coffee was not too overpowering (unlike French roast coffee, which are nearly incinerated and the name is said to come from over-roasting beans as a way to hide the taste of inferior taste of poor quality coffee from the colonies), it was interesting to pick up the small subtleties in the steaming cups in front of us while we sipped and chatted. 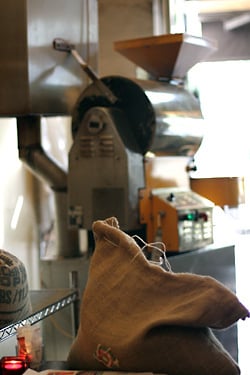 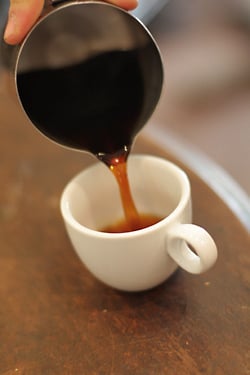 Just last weekend, I’d taken a stroll over to La Caféothèque for a cup of coffee. When I got there, the place was absolutely packed full of locals sipping various cups and it was gratifying to see their shop doing well.

And today, what started as a get-together for coffee turned into an afternoon of tasting, and talking about roasting. But it was also a chance to get better acquainted with one of the little – and somewhat unusual – places in Paris. 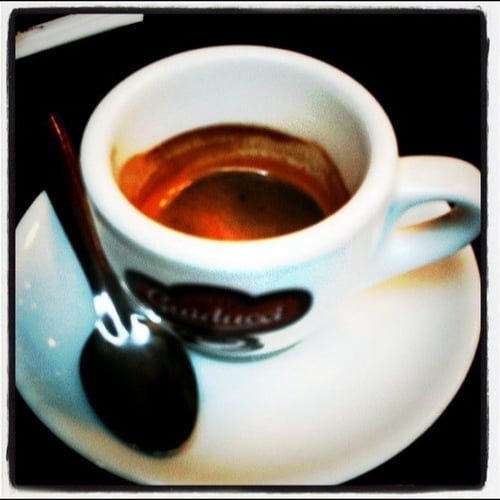 On another coffee-related note, I was making my way around the city this week and revisited a favorite, plus found a new coffee place. (Although it’s not really a “place” if it’s on two wheels. Or is it?)

The first time I went to the tiny corner coffee spot in the Passage des Panoramas and had an espresso, when Antonio Costanza handed over a small cup with just a tablespoon of dark liquid with a gentle froth on top, I knew I had found a man not only after my own heart, but one who came bearing authentic Italian espresso.

His coffee is shipped from Rome, and I’ve never been disappointed here. Well, I take that back. Once I came with a friend from Seattle, who was eager to have a good cup of coffee, and we arrived and the sold metal gate was nearly rolled down to the ground. I peered underneath and asked him if he was, indeed, closed, and he said yes. But he said he would be happy to make us both coffee. And he rolled up the gate and prepared us each a nice cup. 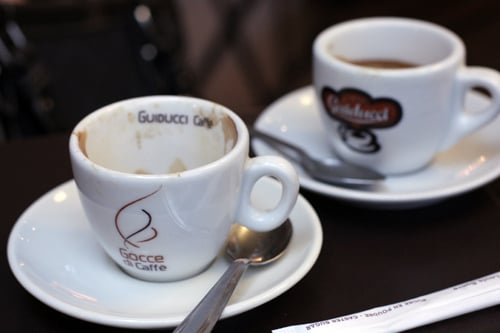 Gocce di Caffè (25 Passage Panorama) is open from 8am to 4pm, Monday to Friday.

A bit later, while wandering around the Bourse (stock exchange) on a sunny afternoon, I noticed something really unusual: an espresso machine mounted on a bicycle. Those of you who live in the United States and are now used to food trucks might not think this odd. But in Paris, it’s a definite first. (Although I have seen men who sharpen knives on occasion riding bikes, fitted with grinding stones, riding around town.) 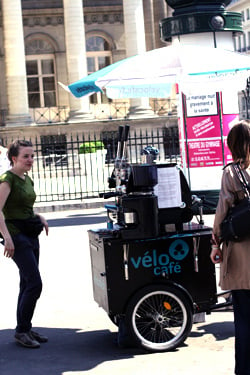 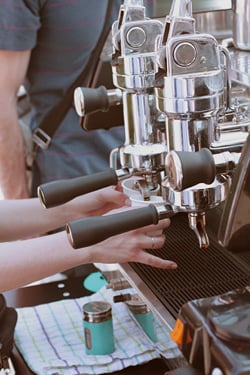 I spoke with the owner of Vélo Café, who is from Denmark, expressing wonder that I came across her, here in front of the stock exchange. She told me is was very (very) difficult to get the right permits to do what she was doing in France. And when I told her how fun it would be if she could have a stand at a market, she said “I’ve been trying. But it’s very (very) difficult.”

Aside from her moxie, I also admired her coffee grinder, which was substantial. To prove her point, she insisted I get in the seat and give the bike a spin around the square. 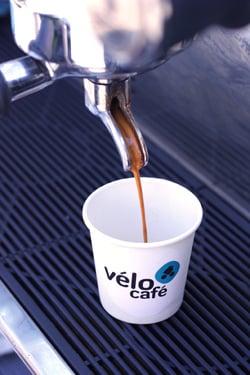 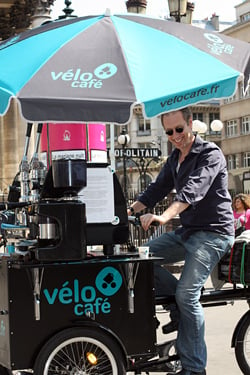 I didn’t actually go far – okay, I just posed because she wanted to take a picture of me on the bicycle – (or maybe she was trying to help me work off all that caffeine I’d had?) – but it was really fun running into her. And the coffee, while not as tight as an Italian espresso, was better than most of the coffee around town—and a huckuva lot more fun to order. She’s only there on weekdays, but perhaps one day you’ll find her at a market near you. Or better yet, near me.

10 Things I just Learned About Coffee

Joe the Art of Coffee

(*I’ve written about this topic in a chapter in The Sweet Life in Paris, in greater depth.)