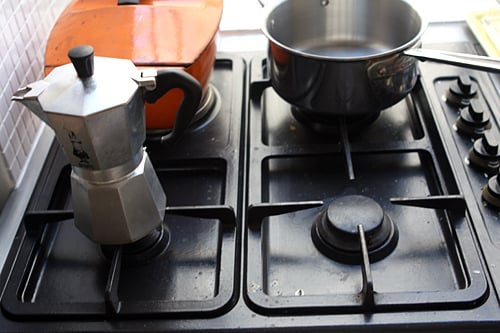 Nowhere is remodeling for the faint of heart and although I did, indeed, learn plenty of new words to expand my French vocabulary, along with a few other things that I won’t recount here, let’s just say that if I ever this take on this kind of project again, I’ll do things a little lot differently. The best advice I could pass on was given to me by a French friend – “Be more French, less American” – which you are welcome to interpret any way you want. 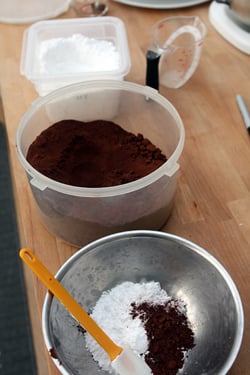 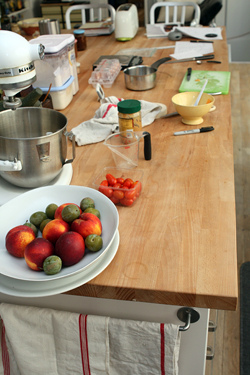 At the beginning of the project, an American friend said, “Please don’t write a book about remodeling in France.” So I promised her I wouldn’t. Which is probably a good thing as no one would believe most of it – and then there’s that pesky issue of the happy ending that we’re still working on : 0

Because Paris is an old city with a lot of history, it’s a challenge to do something that doesn’t work against the city. Modernism hasn’t always been good to Paris (ie: Les Halles), so I went for a very basic kitchen, not in any particular style, but something that was utilitarian first and foremost: I spent most of my life in restaurant kitchens and those are places where I seem to be the most at “home”, not in places with custom wood paneling and fancy design elements. Since light is at a premium in Paris, I went with white cabinets, stainless-steel handles and appliances (although I kept the black, well-used gas stovetop that was there), and wood, for warmth.

I didn’t follow any of the rules. I didn’t read up on where to put the refrigerator in relation to the sink. I didn’t think about work areas, work flow, triangles, circles, squares, rectangles, or tetrahedrons. 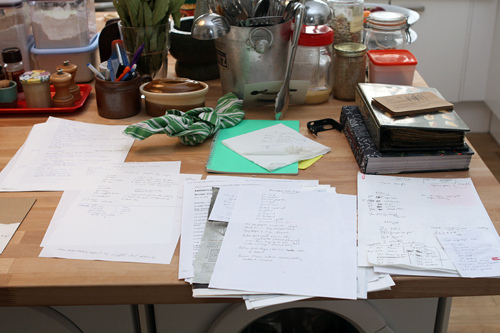 There are no wok burners, designer faucets, wine refrigerators, or any of that kind of stuff. I pretty much kept it to the essentials. (And as you can see, I didn’t clean my kitchen, or the sink, before I took some snaps because I’m always at work in the kitchen.) I did allow myself to get a clothes dryer, which are not common in Paris, mostly due to space and ventilation issues. But a few (American) friends insisted that I get one, and I don’t miss hanging my clothes on a folding drying rack in my apartment and waiting a couple of days for them to dry.

With all the extra time on my hands for cooking, I wanted a big counter to spread everything out on, a lot of light, and open shelves to store frequently used ingredients and cookware on so everything would be within easy reach. I don’t like rifling through drawers for things I use a lot – namely different kinds of flour and sugars, and I dislike going through cabinets of pots and pans searching for the one I want. So I made sure to have things as accessible as possible. 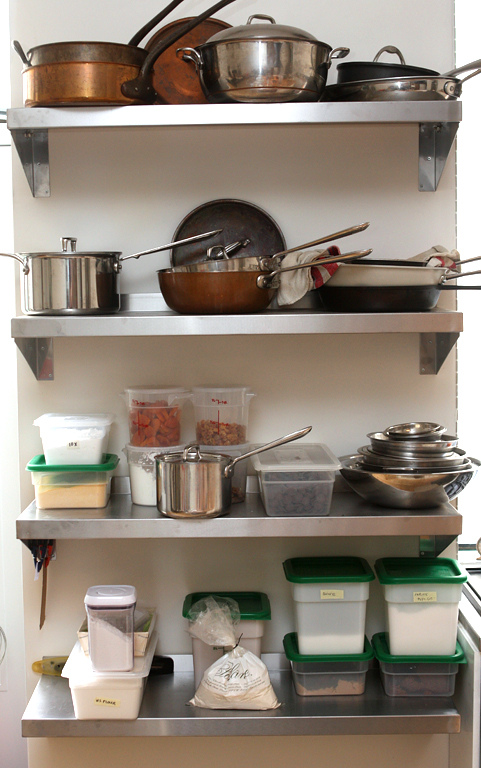 I got my sturdy stainless-steel shelves from Nisbets, a Swiss restaurant supply company. The prices were reasonable and they actually called me to tell me when they shipped them, which was the day after I placed the order. Ah, the Swiss. 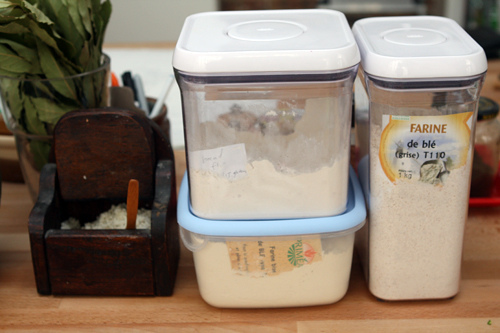 I wanted a big, white sink. One without ornamentation that could hold the enormous amounts of pots and pans that I seem to generate hourly. I recounted my sink search in a previous post, and when I was recently in the south of France, a British friend also remarked at how difficult it was to find big, white sinks in France. Yes, Ikea has them. But they are too small for me because I wanted something that could soak a baking sheet or roasting pan in, not one with a half-sized basin that I would have to wrestle with. And because I spend hours over the sink each day, it was important that it “worked” with me, and that I wasn’t working against it. I was looking for what they refer to as “Butler” sinks in England. Or curiously, as “French farmhouse” sinks, in America.

Did I really need to go rip one out of an old French farmhouse? 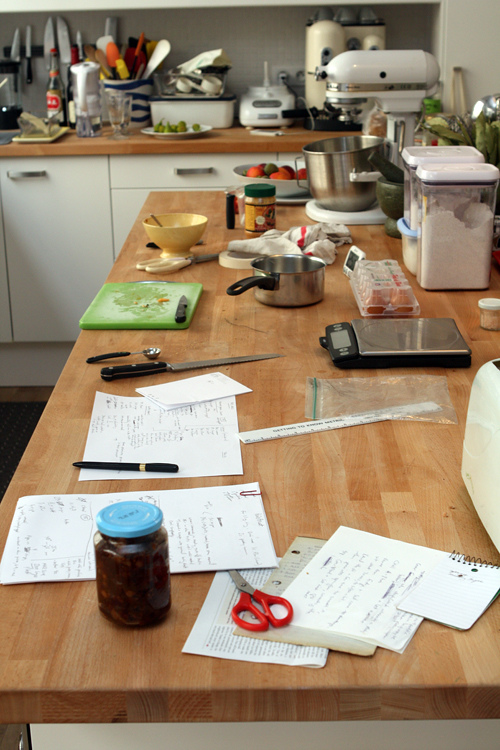 It’s hard here to find anything discounted, even online. So I was shocked when I saw how much I’d have to spend for seemingly commonplace items like plastic outlet covers and light switches. I bought standard, normal, plain white ones and the bill was roughly the equivalent to the cost of a brand-new MacBook pro. (But then I wouldn’t have had anything to plug it into, so I guess I made the right choice.) I also had a hard time finding fixtures that were plain and unadorned, without decoration or ornamentation. I wanted a professional faucet with a hose and sprayer. Cheap faucets usually don’t last long, and since the sticker shock of the plastic outlet covers, I was buckling down the budget. A relative was coming to visit and she brought along this Kraus faucet, which had to be modified a bit for Europe, but works well.

I began searching in catalogs for fixtures used in schools and institutions. I thought the words industrielle and even usine (factory) might be helpful (in the US, I once found great stainless-steel fixtures in a prison catalog), until I learned the word collectivité, which became the most frequently used search word on my computer. 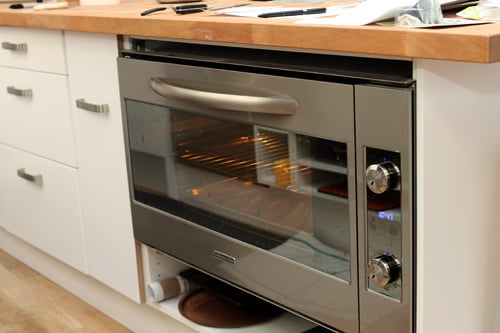 I am probably the only person in Paris with two ovens. Which means that Thanksgiving is definitely going to be at my place for, well, eternity. I needed a larger-than-usual oven (90 cm/35″) to hold baking sheets, as many standard European ovens are smaller and can’t accommodate a 17- or 18-inch sheet pan. However the larger oven takes a (very) long time to preheat so I am happy that I decided to have a second oven that is a combination microwave and regular oven, which is much faster to heat up and I like to use – in spite of the control pad that I can’t quite master no matter how long I study the owner’s manual.

The oven repairman who came to recalibrate the big oven told me digital ovens are actually more responsive and accurate. He also bemoaned the disappearance of raw milk cheeses in France. Fixes ovens and loves raw milk cheese? I guess that explains why he is my new favorite person in France.

I like restaurant-quality gear, so I stocked up on Cambro plastic containers last time I was in New York City. But man, those square containers are like drugs, and now that I got my fix of a few, I need more, more – more! 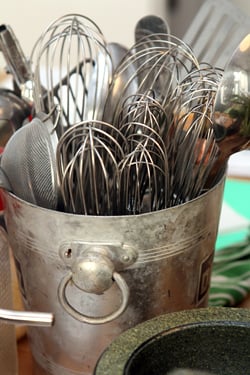 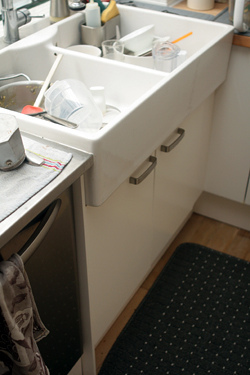 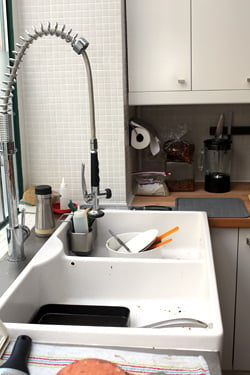 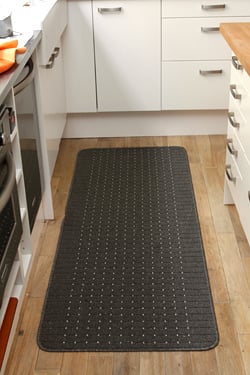 Because I stand a lot in the kitchen, I wanted an anti-fatigue mat, which restaurant workers stand on and they make us happy. I was only found one website that had them, but they didn’t list where you could buy them in France nor did they respond when I asked about availability. So I found these pretty good mats from England for around €30.

(I wanted one of these GelPro mats, which are rubberized for easier clean up, but I didn’t think I could convince anyone to bring one over for me. They’re not as light as Cambro containers.)

Kitchen cabinets were from that big Swedish company that I went back to a grand total of eight times because of various, um, errors. I used some Ikea pulls, and got nicer pulls for other cabinets at La Quincaillerie in Paris, which is one of those great stores that has every single cabinet pull you can imagine – for a price. But the staff is helpful and the selection is amazing, which counts for a lot. And I only had to go there once.

I had the kitchen counters set to a certain height. Many French counters are quite low as people didn’t seem to mind stooping way-back-when, I guess. But now that the cuisine américain (open kitchen) has become more popular, folks are movin’ on up. And since I spend a few hours a day washing dishes, I wanted my sink to be a little higher than normal, too, to preserve my back. 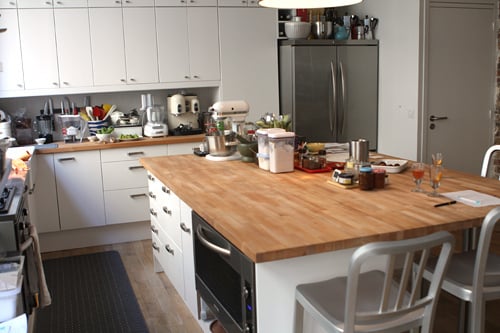 I like stainless-steel bowls a lot because they nest easily, they’re lightweight, and are relatively inexpensive. In Paris, one can find them at Indian shops, which aren’t all that sturdy, so I just buy the small ones there sell which are only about €1 each. For larger ones, I am now trying to get ones with rubberized bottoms, which are a bit more spendy but don’t wobble around. I have a few great ones I got at Sur La Table way-back-when in the states, but the ones I ordered online were a little disappointing because they seemed rather flimsy. (And they weren’t all that cheap, either.) I am a firm believer in having a ton of whisks and spatulas.

My whisks are from Matfer and Oxo and my dream spatulas are the ones from Le Creuset. I used to teach classes at Sur La Table and before anyone else arrived, I would raid the sale racks for Le Creuset spatulas as many of the colors were “seasonal”, and at the end of the season, they’d be put out to pasture. 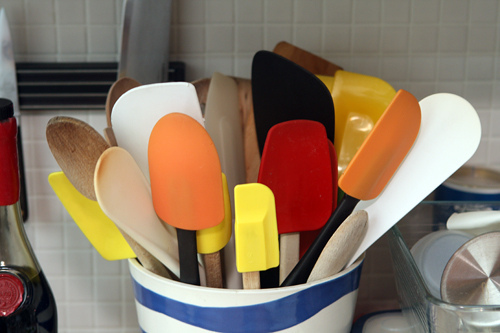 I have a large refrigerator and when Parisian friends come over, they are shocked and it seems a little frivolous. But then I explain that it’s something I use for work and I need the space, and then they get it. And many are discovering ice, too!

Few people in Paris have the space for a regular-sized refrigerator and mine has an ice maker, which I use much, much more than I thought. It’s great for cooling down custards and so forth. And even better, it’s good to have on hand in case you need an emergency cocktail, like I’m going to fix myself after I finish up that sink-load of dishes.