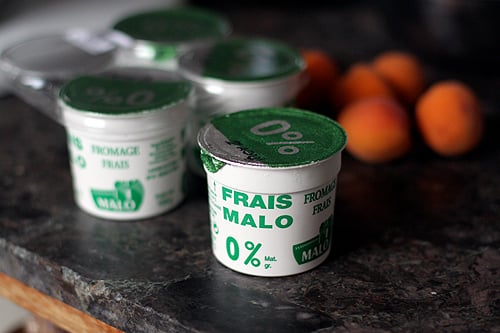 A few weeks ago, I made plans to meet my friend Terresa in Pigalle, to check out a new épicerie (specialty food shop). I don’t know if you’re familiar with Pigalle, but the area has a certain well-deserved ‘reputation’ and if you’re a middle-aged man walking around by yourself in the evening, casually looking in the windows of the cafés and bars, don’t be surprised if a very scantily-clad woman tries to catch your eye back, and catch your fancy. And a few euros.

My friend was late, so after I cut my walk short though the quartier, I waited outside the shop, where we were planning to meet, which made me only slightly less of a target. And within a few minutes, people were handing me business cards for various ‘services’ of the female persuasion. So I was especially glad when the only woman in the neighborhood I was interested in hooking up with finally arrived and we went inside. 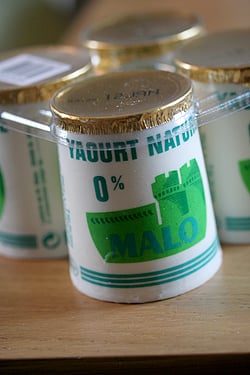 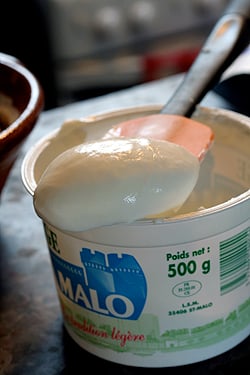 The idea of the store is to be one place filled with many great products. There were indeed some interesting things on the shelves, including Spanish hams and other European specialties. But when you live in France, it’s hard to get worked up about shrink-wrapped cheeses, no matter how good they might be, when there’s so many amazing fromageries in every neighborhood. But I think they’re trying to be both a specialty shop and cater to the locals who need the basics, too. So I give them points for rising to that task, and most of us would be thrilled to have a place like that in our neighborhood.

We wandered upstairs, where we checked out the wine cave. It was small, but had a nice selection and the extremely nice young man didn’t give me his card (drat!…except I later found he out was Laurent Pinsolle, one of the owners) but he stopped to explain to us some of the wines they carried, included a viognier that could be had for just €3.95 that he said was an excellent value. It was hard to listen to him, because I was trying to think of how I could get Terresa to leave us alone in the wine cave for a while to discuss the finer points of les terroirs…or whatever.

But I was also eager (albeit a bit less so) to head back downstairs to the full-on refrigerated shelf devoted to Malo dairy products that I noticed on the way in.

For anyone that is misguided and still waving the tattered banner that ‘Fat is Flavor’, obviously hasn’t tasted Malo’s 0% fromage frais. Fromage frais is a creamy little pot of milk that’s been fermented with lactic acid. It’s similar to yogurt, but instead of having an acidic tang, it’s smooth and deliriously creamy. It’s like eating crème fraîche without feeling like a glutton. So you eat the whole container. How great is that? 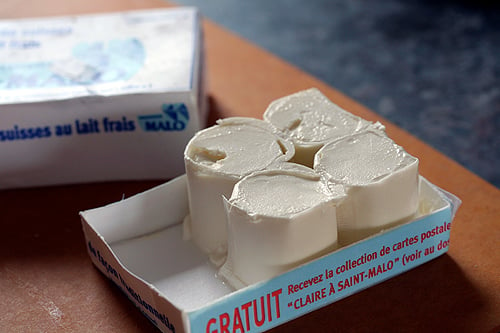 And when I saw the little packet of 6 petits Suisses for only €1.80, those went right into my soon-to-be-full shopping basket. A reader a while back commented that the Malo label looked like it was last designed in 1970, then they just gave up on any future redesigns. And I gotta say, the packaging is part of what I like about their products.

They were bought out by another company a couple of years ago, but unlike others, I like to see things through rose-colored glasses around here, and the products still taste good. (Or I’m just an old fuddy-duddy, clinging to any remnants of la vieille France.) 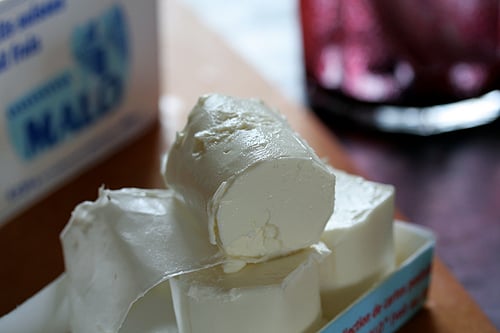 If you’ve never had a petit Suisse, they come in little rolls, usually six to a pack, which get de-banded in a bowl and sprinkled with cassonade sugar or jam, for young folks. And a few older ones. Because they’re so rich, the cylinders are pretty small. Other brands make a 0% version, but in this case, I’m going to be a call my own bluff and stick with the fat-is-flavor camp. 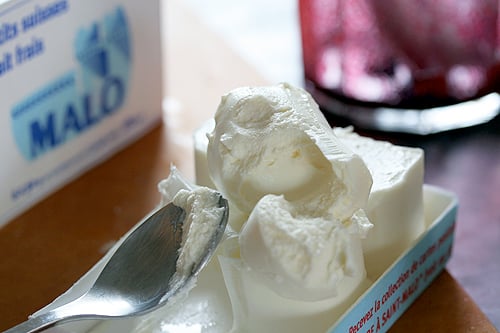 Since then, I found that my nearby Shopi supermarket has Malo products, as well. Which is good news because I’ve decided to stop going to my local Franprix and Monoprix because, well, I wanted to go somewhere where they treated customers like human beings and the people at my local Shopi meet those criterion.

And because I’m a big supporter of customer service, I bought the a largest container of 0% fromage blanc and a few bags of chips on my last visit to make some Lipton Onion Soup Mix Dip (thanks Bill & Elaine!) for a dinner party I was having that night. 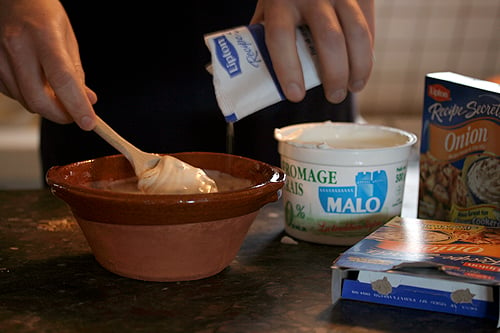 For those purists out there, Oui, you can get ruffled chips in France. And because everyone is on le régime, they now even have baked ones. I don’t know about all the ingredients in the soup mix, but at least the potato chips and base for the dip fall into the “healthy” category.

When I mixed up the batch and tasted it, I wasn’t sure if my French guests would like it. Like marshmallow-topped sweet potatoes, See’s Molasses Chips*, and peanut butter (which Romain pointed out once “…tastes like getting sick”—of course, while I was eating some), not everything we Americans enjoy have international appeal.

But lest you think there’s nothing French about this dip, you’re wrong. Everyone loved the dip, but no one but me noticed that the chips I bought had very a distinct shape, which reminded me of something else…something very French… 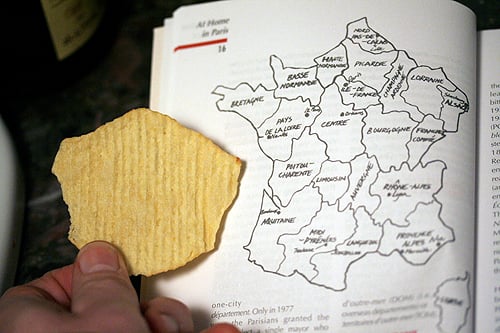 *I was at a Christmas party last month and I went into the kitchen and saw a big stack of boxes of, yes, See’s Candy! I almost flipped out and the hostess told me that a friend sends a gift of them every year. I plucked all the Molasses Chips out of the boxes of assortments, and rifled through the rest of the boxes of chocolates, knowing from considerably experience, what’s in each and every one of those dark-brown bonbons.

There was also a box of peanut brittle, which I enjoyed as well. But I didn’t offer any to Romain.