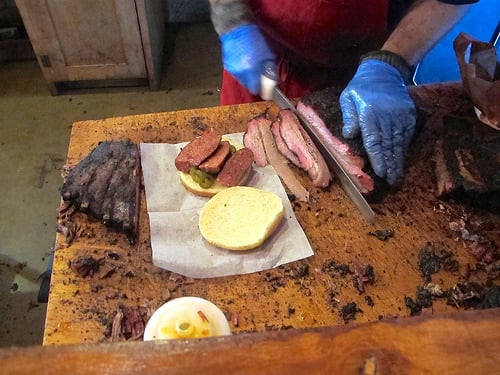 One thing vegans and vegetarians don’t have to worry about is going into a “meat coma.” But I do, as I’ve been in one twice during my week in Texas. On a previous trip, my friend Matt (who own Tèo gelato and espresso shop, in Austin – and is a must-stop) whisked me away from the airport and took me straight out to Lockhart, known for its excellent bbq joints. However since my free time was limited to little less than three hours, total, we decided to stay within the city limits of Austin (or at least nearby) and get my bbq fix there. 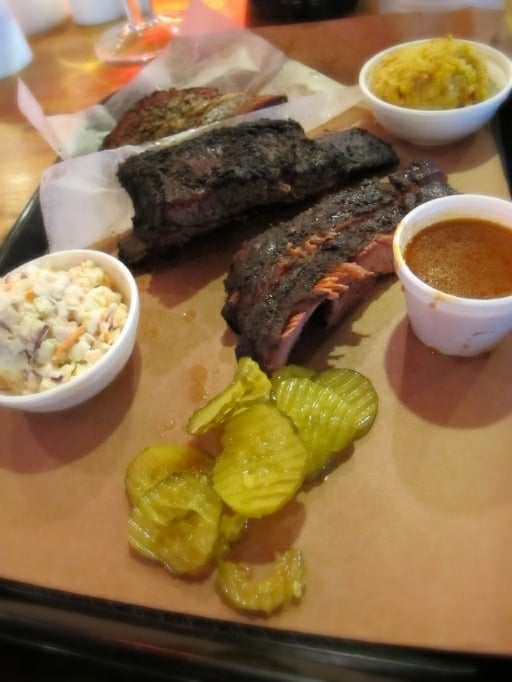 Matt told me the two places that were more convenient, since I was pressed for time, and when we drove by Franklin Barbecue and saw what is said to be a three-hour wait (people were, indeed, lined up, sitting in lawn chairs, with coolers of beer), I said, “Keep going…” and we pulled up to Stiles Switch BBQ.

And once inside, I was glad we did. The super-friendly staff at the counter provided yet another Texas-style welcome, spending time telling us about the different kinds of meats, after they found out I lived in Paris. While I appreciated the introduction, I had already honed in one the brisket, the beef ribs, and the pork ribs. All were excellent, but the beef rib was especially good and if that had been my last meal ever, I would have been happy. 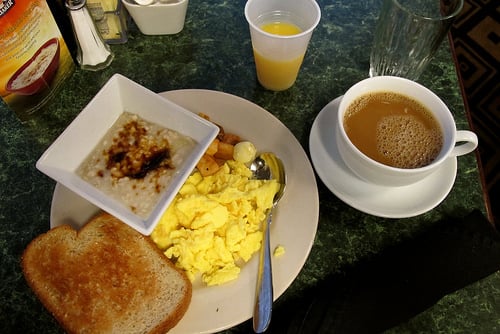 My first meals of the day during my trip had been less-successful. I stayed at a pretty fancy hotel in Dallas, which put free, fresh cookies out in the lobby each afternoon. However breakfast was a little too fancy for me and since I’m not really at my best in the morning, while I appreciated the attentive service, the $25 bagel I had (plus tax and tip) was a little hard to swallow. (I’m still perplexed how a bagel with a tablespoon of cream cheese and four slices of smoked salmon costs about 20% more than a breakfast of two farm eggs, toast with Vermont butter, three kinds of house made jam, a fried potato cake, and four slices of excellent bacon. Lesson learned!) 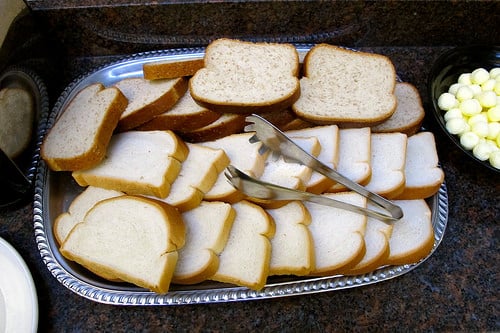 Once I moved on, breakfast moved downhill from there. I stayed in what is billed as a hip “design hotel” for millennials, offering power ports everywhere, and instead of a lobby, we were invited to congregate in the “Remix” area. Even though my bed had me questioning whether I should (or shouldn’t) hop into it later, it was just fine when I finally did. (And I survived the night.) 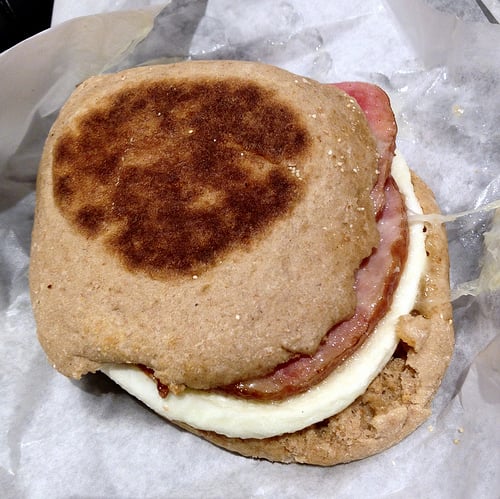 But the next morning, faced with a refrigerated case of pre-packaged sandwiches in the lobby snack area, called “Refresh”, I opted for a more nourishing breakfast sandwich, and was handed a greasy microwaved breakfast sandwich, which begged the question: Is there anyone out there who really believes that bread should be microwaved, rather than toasted? If so, you are condemned to spend the rest of your life sleeping in beds filled with dubious lumps, and whatever other surprises lurk beneath the sheets. 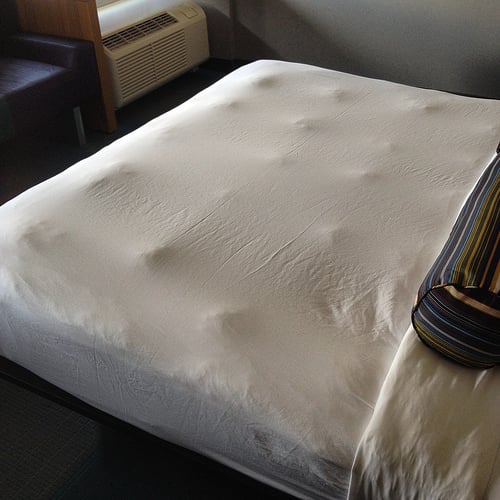 During my tour, lots of people are asking me about some of the cultural differences that I write about between the French and Americans. I straddle both cultures, and find each one curious at times, and amusing. And because of that, a frequent question is: What do I miss from the States? Oddly, few ask what I miss about Paris, which I guess is because I’m back on my home turf, so to speak.

In answer to the first, my dream is that the European low-cost carriers (and some of the US ones as well) would adopt the non-scrum boarding process, and friendly service, of Southwest airlines? Honestly, I’ve never seen more well-behaved people (as in, the customers), obediently lining up by number – and passengers working together, en masse, to sit down, so that the plane take off as quickly as possible. That, mes amis, is the meaning of fraternité.

Even though no one asked, I miss easy access to good bread. True, you can get good bread in the States. But out here on-the-road, it’s a crapshoot and artisan bread hasn’t made it to the far (and near) reaches of this great land.

But I definitely don’t miss the startlingly graphic ads for toilet paper (which make me wince, but fortunately don’t show the actual “act” they’re so busy discussing – uh, yet..) and I’ve learned a lot about irritable bowel syndrome while sipping my murky morning hotel coffee in bed and watch with voyeuristic pleasure how couples come together in gauzy beach situations to ruminate over their wood-less love life. Although I had to look up what transvaginal mesh was, because the commercials made me feel like I might be missing out on something.

And…moving on…I’m also surprised at how polite people are, insisting that you were in front of them in line (whoa!), and not being surrounded by clouds of cigarette smoke on the streets. (And even in my apartment, courtesy of my neighbors.) I guess Ségolène Royal, the new Minister of Écologie in France – and the President’s ex, is too. And in my absence has banned smoking in the courtyard and gardens of her building – along with low-cut tops for women in the office – which she denied. 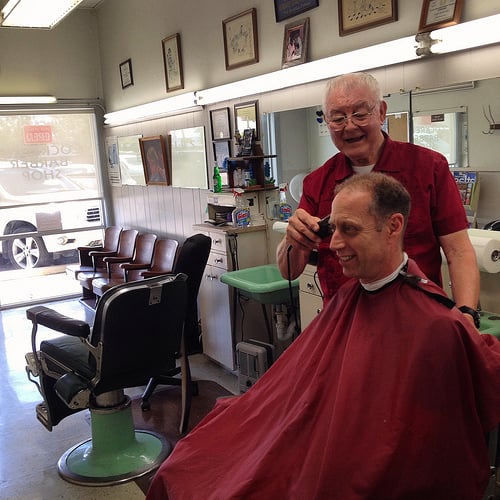 Texas also live up to their top-down image, and are very friendly. Everyone’s been super-nice. And at a book signing, one of them arrived bearing a battered vintage cookbook for me to sign. I was a little confused, until I saw that it was a copy of my ice cream book, The Perfect Scoop, obviously very well-used. Confirmation that at my age, I guess I’m considered “vintage.” Equally considered vintage would be Tom, the owner and barber of Cockrell’s Barber Shop (806 Brentwood St, Austin), just next to Stiles bbq, who has been cutting hair there for fifty-one years, who gave me one of the best haircuts of my life, for only $14. If I let him do the flat-top he insisted would look good on me, it woulda cost me an extra buck. And probably a number of friends back home, when I came back looking like a drill sergeant.

(Although this means that I don’t get to visit my old hair cutter in San Francisco, the tough straight guy who works in a leather barber shop and wears chains, long leather skirts, and black leather boots to work, and who always leans over to kiss me on the lips when I arrive. I won’t tell you what kind of magazines they have in the waiting room, but let’s just say the fellows in them did a good job managing the hair below the neck – and below the waist, too. I think if I had told Tom about this, I would have hastened his retirement.) 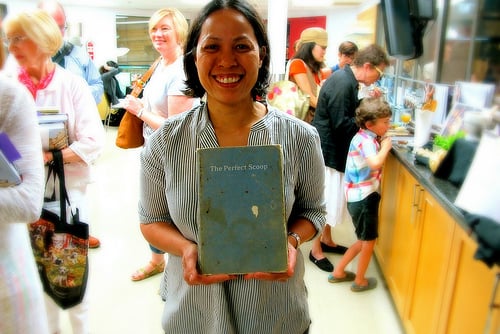 The woman who brought the book was Jam Sanitchat, the chef-owner of Thai Fresh, a Thai restaurant and coffee shop that churns up their own ice cream in Austin. One of the sad things about traveling for “work” is that I’m on a tight leash and my schedule is so packed that I have little, if any, time to go out and eat at all the great places. But hers is certainly on my list for the next time. And since before I left, Romain confessed that Thai food is his favorite cuisine, I’m bringing him along with me. 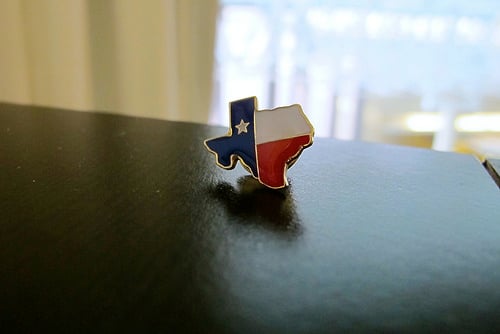 And there will be a next time because the last night, I was gifted a lovely pin by a couple who came to one of my classes, who works for the governor, which I think makes me an honorary Texan. And not only do I have the pin, but also have “meat coma” on my medical records to prove it.