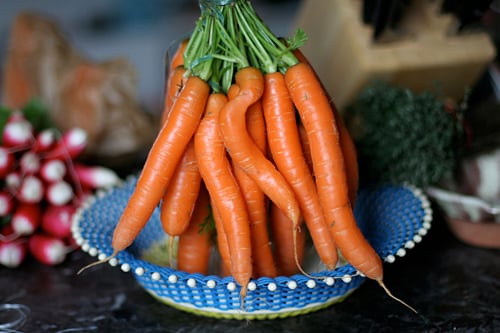 The European Union just overturned regulations that will allow fruits and vegetables that aren’t technically picture-perfect, to be sold alongside their more attractive counterparts. But the laws are still place until next July. I had no idea there was such a directive in effect, and I’ve been innocently part of a conspiracy, participating in, and abetting, illegal behavior.

According to EU directives, things like carrots must be “..not forked, free from secondary roots.” Since I found that out, I’ve been much more careful about what I bring home. When I picked these out at the market, my carrots didn’t seems to have any of those kinds of hideous deformations (imagine that…forked roots!…ick!), but when I unpacked my haul, I noticed that the specimen above found its way into my market basket. Accidentally, of course.

I also learned that it’s illegal to sell a cauliflower that’s less than 11cm in diameter. Thank goodness I found out about these laws before it was too late; who knew what an outlaw I was, shopping at the market, skirting laws and wreaking havoc in my wake. 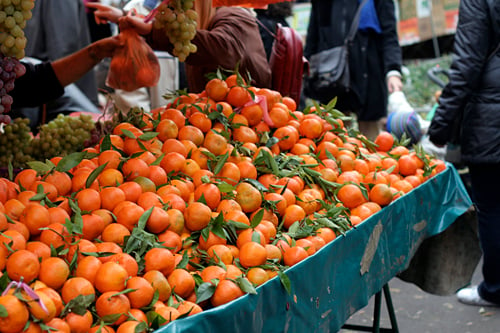 (And I won’t even tell you about the international incident I almost caused this morning by snapping a picture of some persimmons that were for sale. That’s a whole nother story.)

I’m just hoping later this afternoon there isn’t a knock on my door. I did end up buying six persimmons that were riddled with some unsightly blemishes, and a slice of pumpkin that was cut from a larger one that looked very, very suspect.

And I’m afraid of looking too closely through my bunch of radishes. Who knows what kind of contraband is lurking in there?