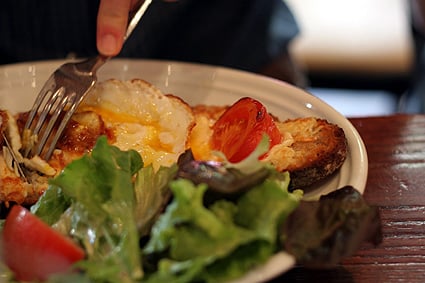 Paris abounds in cafés. There is one on each and every corner. In your quartier, you’ll have a favorite, your place to hang out which you affectionately call ma cantine. You go for the camaraderie and the ambiance. Sometimes the food is good, sometimes not so terrific. But that’s not the point. You go since it’s close by, the patron greets you by name, and the wine is drinkable…and promptly refilled. 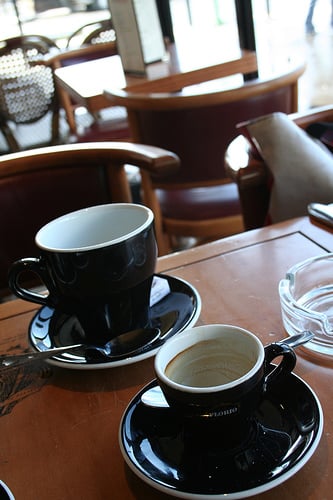 With the weather still chilly and damp (which hasn’t thwarted the hordes of people protesting new government work proposals this week in Paris), those of us with cabin fever (who are protesting the outdoors until the weather becomes more hospitable) find that cafés become the perfect place to hang out and watch the world go by…and beats staying indoors after five long months of grey, dismal weather, when you just can’t take it anymore. In addition to the strikers, there are other signs of spring everywhere: tiny blossoms on the trees, long underwear being tossed out of windows (well, maybe just mine), and the optimistic glimmer of sunshine every now and then peering through the grey skies.

Going for a walk, I like the idea of stopping for lunch in a café since the food is generally simple, modestly-priced, and decent. And with a petit pichet of red wine, the afternoon does drift by rather pleasantly. But most often if you order a salad, it’s terrible. A few tired, leaves of wilted lettuce, the omni-present mustardy vinaigrette, tasteless tomatoes, and green beans so limp you can forget any final money shot. Then there’s the final insult: a spoonful of canned corn plopped smack in the middle of the whole mess, impossible to shove aside.

And don’t get me started about the pile of rice that’s too-often plunked down on la salade Niçoise. They should bring back the guillotine for whoever came up with that brilliant idea. And please, allow me to be the one to release the handle.

While wandering through the 6th arrondissement this week to visit a favorite fromagerie in the area, we decided to stop for lunch at a café I’d heard about, passed by several times, but never sat down for a meal. The menu, frankly, never looked exciting enough to make me want to eat there rather than another favorite lunch spot in the neighborhood.

But we sat down and since I had reservations that night at Le Meurice, the swank restaurant in the Hotel Meurice, I wanted a salad. Scanning the menu, I noticed an entire portion devoted to French Fries, les frites. My interested piqued, certain they were à maison, made in-house. So with little convincing, we ordered a plate to share. I decided on the salade œuf mollet, whose brief description didn’t do it justice. 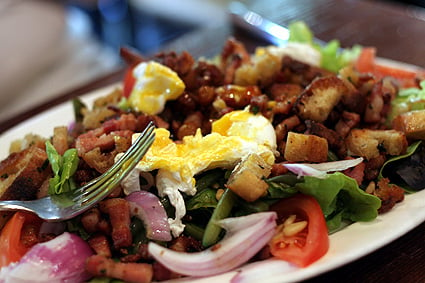 When the salad came, I was thrilled to find it practically perfect. Each bite was a wonderful revelation of textures, contrasting salty bits of meat and croûtons with the perfect ratio of crispness to tenderness. Fresh lettuce leaves topped with enormous lardons, cubes of smoked bacon fried extra-crispy with just a bit of fat to bind the pieces of succulent pork together. Mixed in were cubes of brioche, perhaps tossed with butter or bacon fat then toasted until crisp and toothsome. (Have I used the word crisp enough?) Moistening everything was the soft-cooked egg resting on top. Once split open, the runny yolk invaded everything, melding all the crisp (!) ingredients into a gorgeous and exceptionally tasty lunch. 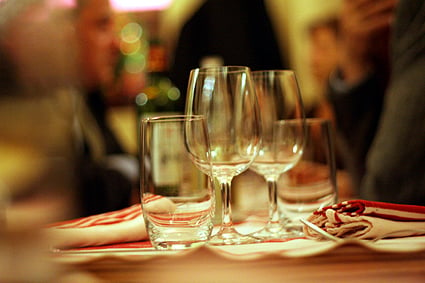 And the frites? No bad at all. They would have benefited from an extra minute in the deep-fryer (What’s up with that? Does anyone really like soft French Fries?) but they were very good and fresh. After a sprinkle of fleur de sel, they disappeared tout de suite.

At the next table the waiter set down one of the most magnificent Croques in Paris. (It’s a favorite lunch of mine so I’m in a position to know.) The version at Le Nemrod is served on a jumbo crusty slab of pain Poilâne, topped with a smear of béchamel sauce, then a few choice slices of ham and cheese. It arrives at the table still sizzling, the smell of soft, caramelized cheese bubbling away. It made me want to summon up a little bravado and ask for a bite. But I kept my attention digging into my salad but made a mental note to order that next time. And there will certainly be a next time. Any takers?

For dessert we strolled a few blocks to Sip, a corner cafe specializing in house-made ice cream, but I had heard about their hazelnut paste-infused hot chocolate and was anxious to give it a try. 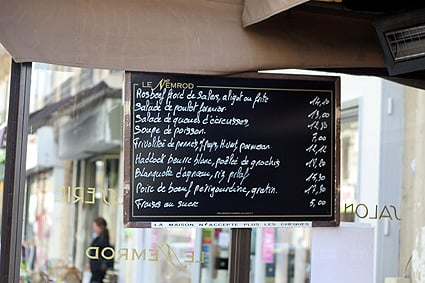 It was good, not great. It wasn’t too thick, nor too thin. It was pretty to look at and went down rather smoothly. I loved the interior, a 70’s palette of pink and gray. Lots of chrome and mirrors and perhaps the goofiest clock in Paris. And being Paris, there was just a smidgen of attitude from the server. As anyone know who lives here, the fun is learning how to win them over and get what you want (…if you’re lucky!)

Back in the drizzle, I headed home, stopping by the pharmacy for a tube of la présure (to make homemade cottage cheese), which, due to my accent, they kept thinking I was asking for la pleasure.

Which I already had that day. Twice, in fact.