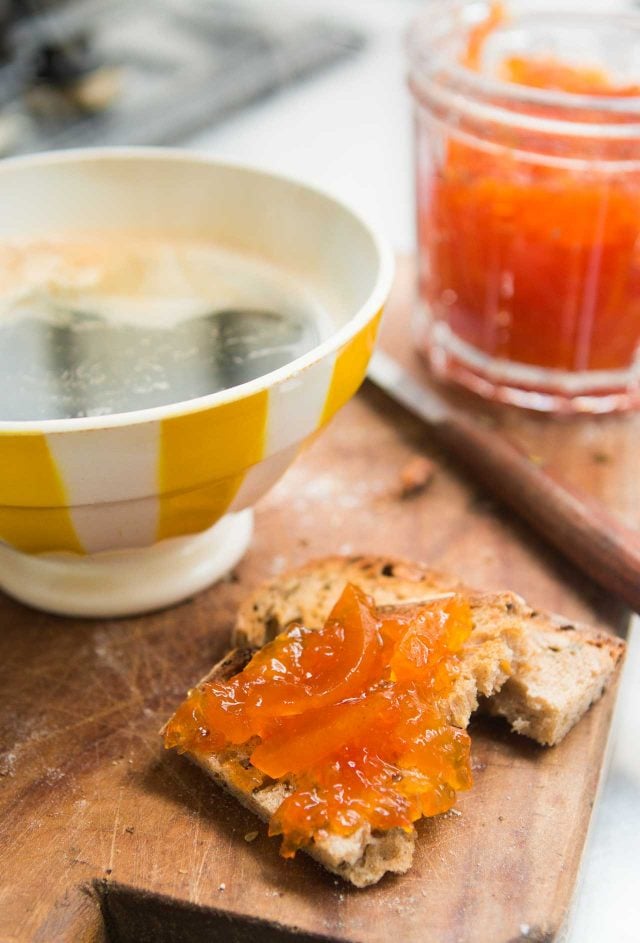 I’ve been making my own jams and marmalades for many years, so with apologies to those who’ve asked me which French jam to buy when they come to Paris, they’re often disappointed when I can’t guide them in the right direction. (Unless they want me to guide them to my jam-crowded kitchen cupboard.) Unless someone has given me a jar of theirs, I have so much on hand that, I can say without a hint of snobbery (but out of necessity) that I only eat my own. Romain is used to them, too, but when he tasted this Pink Grapefruit Marmalade, he put his morning coffee down to tell me that this was the best marmalade that he’s ever had. 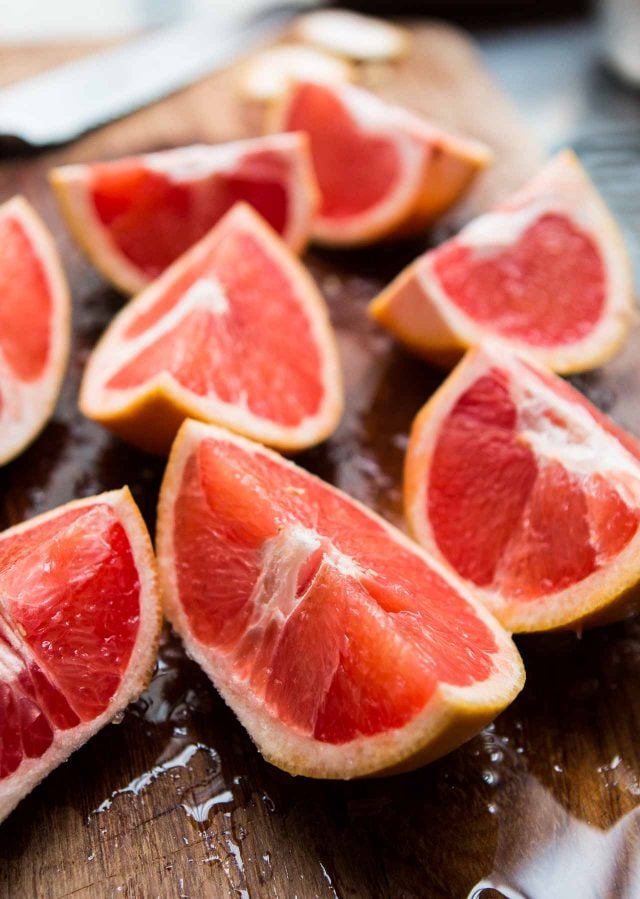 For those who follow me on Instagram, you’ve undoubtedly been seeing me make a lot of marmalade in my Stories lately. Marmalade-making took over my life for the last few days, although it may have been weeks…I may have lost track of time since turning my kitchen into a cuisine de confiture! For a while, it seemed all I was doing was peeling, pithing, slicing, soaking, sugaring, and jarring marmalade in between parrying questions about where the recipes are, to make them all.

To follow in my footsteps, I’ve got recipes on the blog for Seville Orange Marmalade, Pink Grapefruit-Vermouth Marmalade, Sweet Lemon Marmalade, Kumquat Marmalade, and even a Shallot Marmalade that’s great served with pâté or other rich, meaty dishes. And if you’ve got too much jam or marmalade, you can even make this Easy Jam Tart. If you want even more, there’s my Jams & Jellies recipe page, if you’re as inclined as I am to fill your kitchen with confitures maison (homemade preserves.) 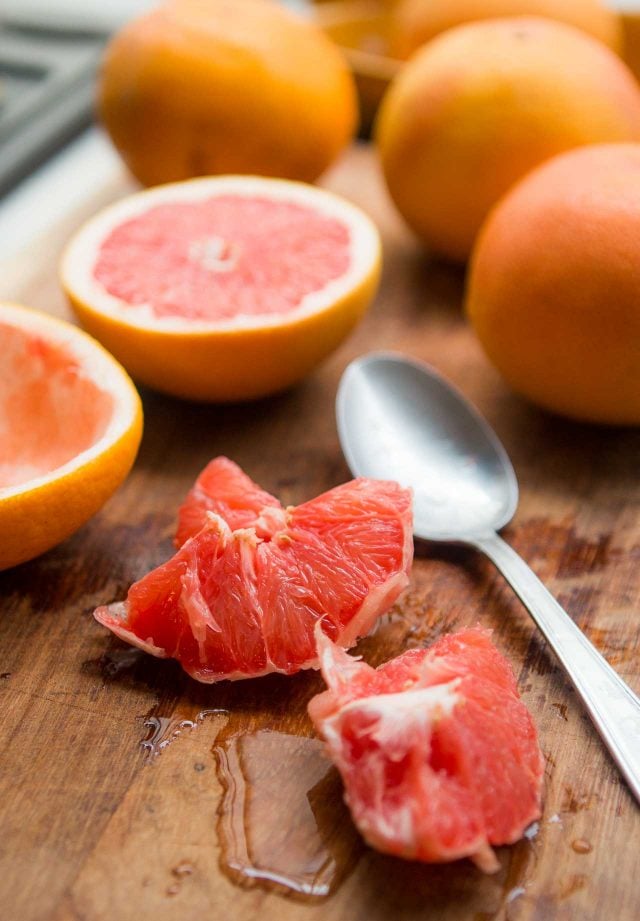 I was talking to Lesley Chesterman over tea at the Ritz when she was in Paris last week, on a break from my jam-making duties. Lesley was a ballet dancer who became a pastry chef, then became the restaurant critic for the Montreal Gazette for many years, and is now writing a cookbook. After eating tiers and tiers of lovely pastries, cake, and cookies by pastry chef François Perret, on the way out we were discussing the next phases of our lives.

I said to her, “The next place I live, it needs to be warm, inexpensive, on a beach, and has good food. That would be Thailand.” She wondered aloud, “Why do all pastry chefs like Thai food?” I think it’s because we gravitate toward anything tart, sharp, and sour, to contrast to the other flavors we work with all day, even though I think the best desserts balance both the sweet and tart in the right proportions, as this grapefruit marmalade does. 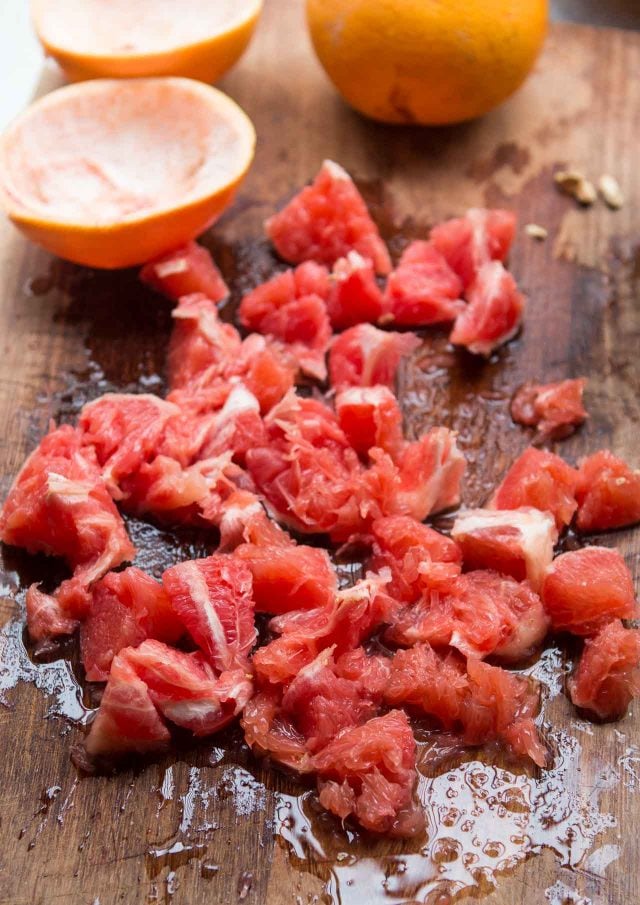 This Grapefruit Marmalade has a bright citrus flavor that cuts right to the chase. I decided to use more pulp, less rind in it than normal. Grapefruits have a thick rind and this time around – and yes, there will probably be a next time before citrus season is finally over – I wanted a marmalade that was a bit smoother. 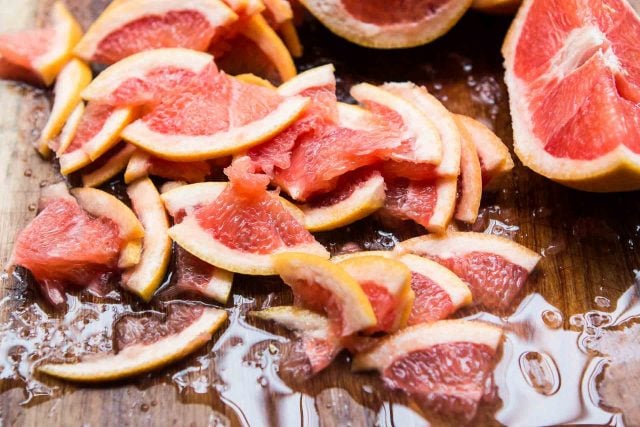 In the end, this marmalade turned out perfectly. Sometimes readers ask me if I ever add herbs or other things to jams. A certain Frenchman, even if I sneak a 1/4 teaspoon of ginger eau-de-vie or a dash of vanilla into a big pot of marmalade, he’ll say, “I can really taste the ginger in there. I prefer nature…” And being me, I spend the next few weeks watching him every morning, spooning jam onto his toast, feeling like I’ve failed in my duties. But I’m happy to say that since making this marmalade, I wake up each morning, and look forward to starting my/our day on a bright note. Come to think of it, I should probably grab some more pink grapefuits and make a few more batches, so the future looks as bright and sunny as this marmalade. 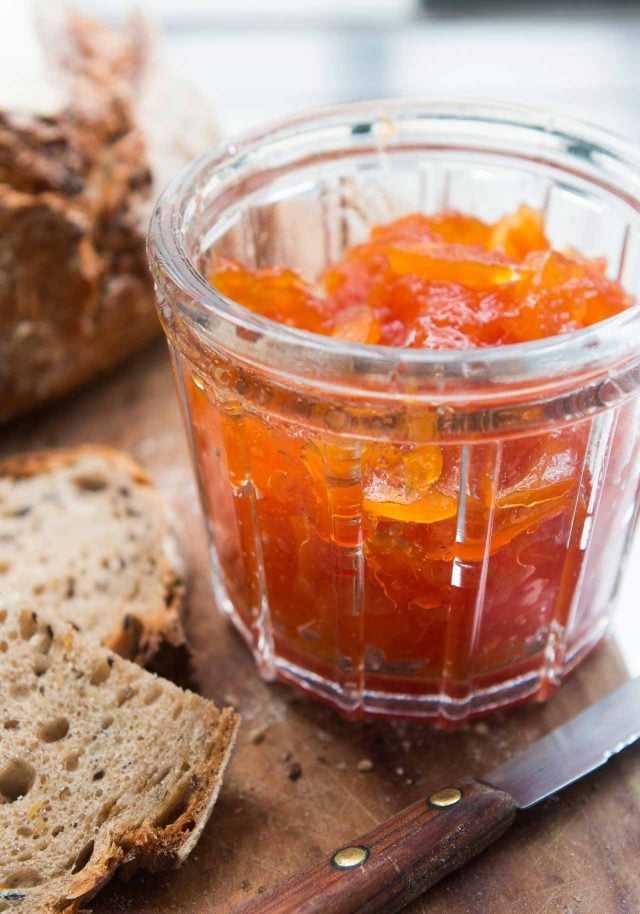 A FAQ I am asked is "Can I use less sugar?" In jams and marmalade, sugar doesn't just sweeten; it preserves and gels. I tried this with less sugar and it began reducing too much before it jelled, which would have resulted in a thick, dry marmalade. So the best strategy with this, or any jam or marmalade, is to make the recipe as written, and eat less of it. Adding a swipe of ricotta or labne to toast before adding marmalade, is a good way to use less while still enjoying some of the confiture. To test the jam for doneness, you can either insert a candy thermometer into the pot in step 4, or you can put a plate in the freezer and use a variation of the "wrinkle test," turning off the marmalade when you think it's done (to avoid overcooking) and putting a spoonful on the chilled plate. Return the plate to the freezer 3-5 minutes then nudge the marmalade with your finger; if the syrup is thick and holds its shape, it's done. Unlike other preserves, I leave this one a little looser and it doesn't need to quite wrinkle. I don't can jams and usually just store them in the refrigerator, but if you'd like information on how to do that, check the National Center for Home Food Preservation website.
4 medium pink grapefruits (about 2 1/2 pounds, 1kg), preferably unsprayed or organic
5 cups (1,4l) water, plus more for cooking the grapefruit slices in step 3
3 1/2 cups (700g) sugar
the juice of 1 lemon
1. Cut the grapefruits in half. Use a soup spoon to scrape the pulp out of four of the grapefruit halves*. Remove any seeds and coarsely dice the grapefruit pulp and scrape it, along with any juice on the cutting board, into a bowl. (If you have one of those cutting boards with a gutter to collect meat juice, those work well here, as well as in the next step.) Set aside.
2. Cut the remaining four grapefruit halves in half, remove the seeds, and use a sharp knife (I like to use a serrated bread knife) to cut the grapefruit in slices as thin as you'd like. I try to get them as thin as a coin, but sometimes I get impatient so don't always reach that goal. Take care using the knife as the fruit pieces can be slippery.
3. Put the grapefruit slices in a large non-reactive pot or Dutch oven. (Any juices on the cutting board can be scraped into the bowl of grapefruit pulp.) Cover the grapefruit slices with water, add a pinch of salt, cover the pot, and bring to a boil.
4. Reduce the heat to a simmer and cook for 5 minutes. Turn off the heat and let the grapefruit slices sit in the hot water until they're soft and translucent. Strain the grapefruit slices, discarding the water, and place the cooked grapefruit slices back in the pot or Dutch oven along with the chopped grapefruit pulp, 5 cups of water, sugar, and lemon juice.
5. Cook the mixture over medium-high heat until it reduces and the marmalade has thickened and become syrupy. If using a candy thermometer, it'll read around 216-218ºF (102-103ºC.) Otherwise, check the headnote before the recipe for how I test this particular marmalade for doneness.
6. Ladle the hot marmalade into clean jars and cover.

*You can use the grapefruit rinds to make Candied Grapefruit Peel. 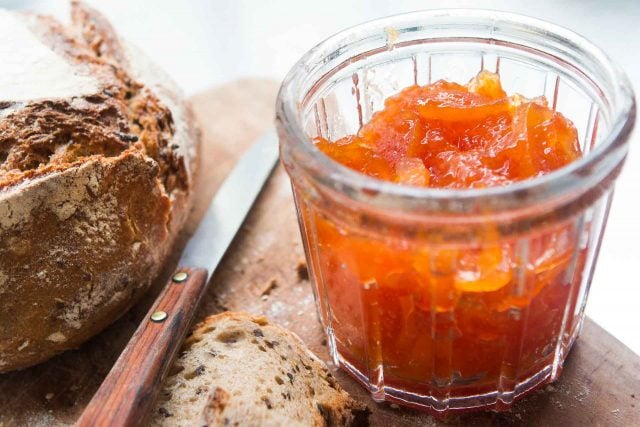 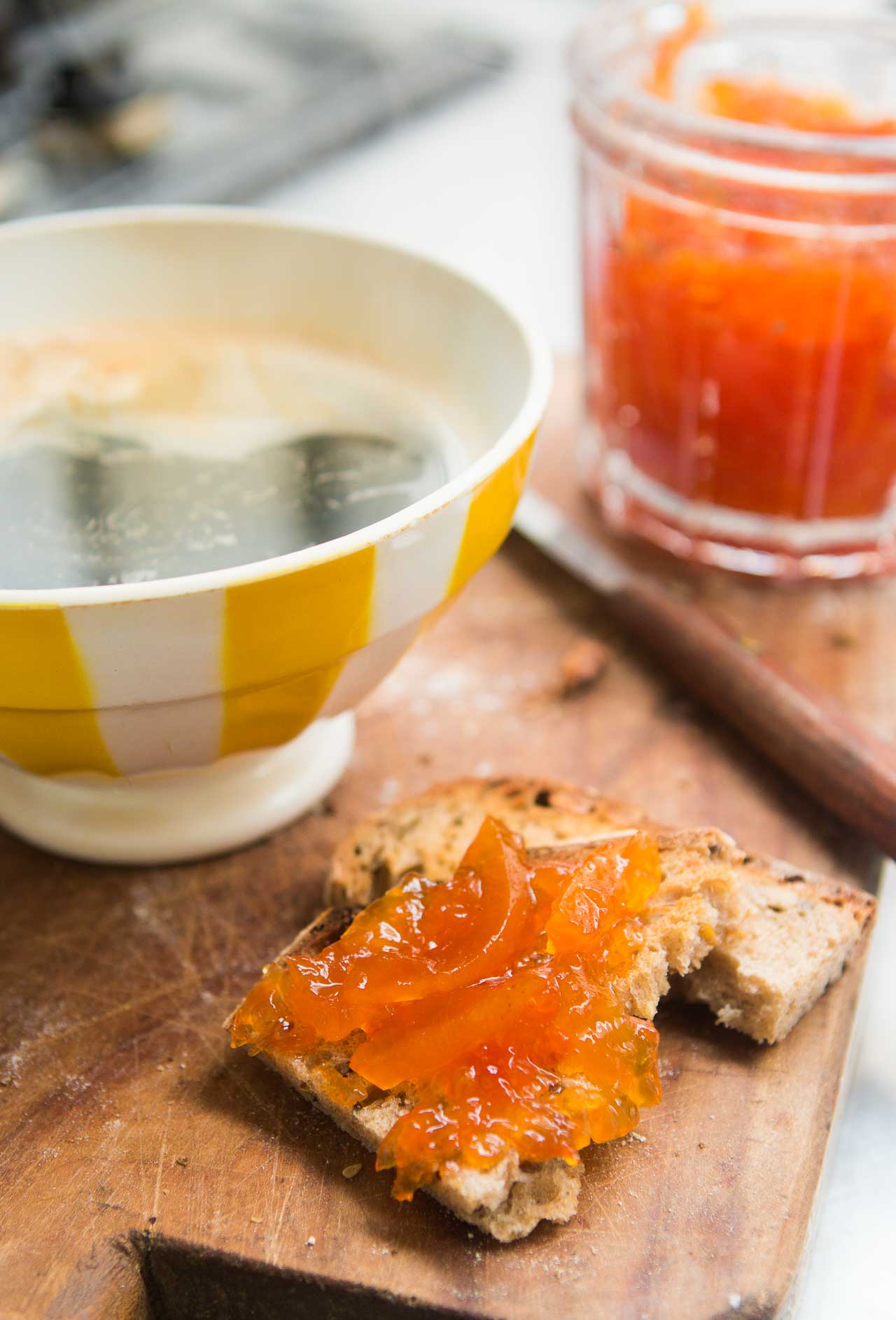