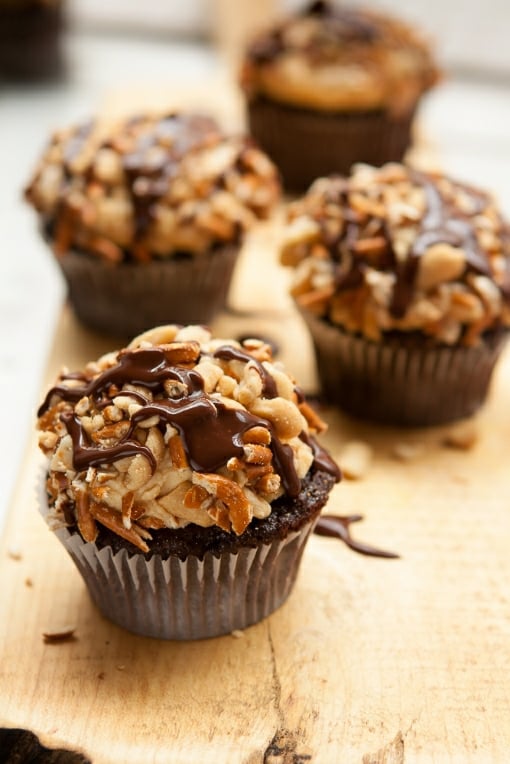 Well, this is quite a baking book. Starting off with the first thirty-one pages, which contain some of the most profanity laced – and best – advice I’ve read about baking. (Hmm, maybe I’ve been doing it all wrong.) But I couldn’t put Robicelli’s: A Love Story with Cupcakes down as I read through the fore matter, which the authors admonish that you’d better read because they “spent the better part of two freaking years” writing it because they “don’t want you jumping in like a lunatic and do(ing) something stupid.” Fair enough. 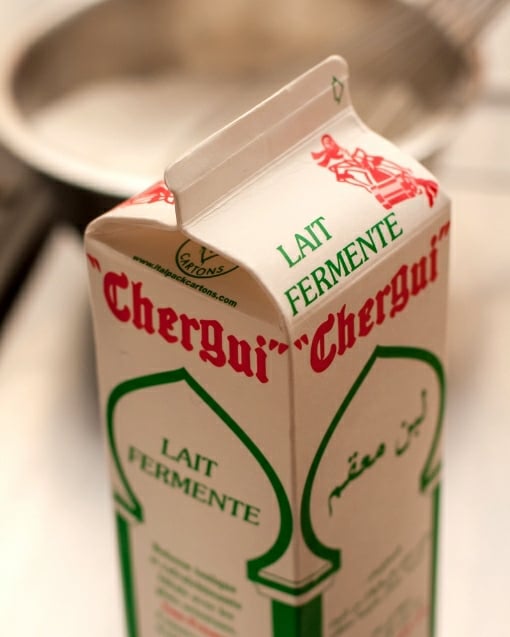 So it’s a good idea to drop any reluctance you have to strong language – and cupcakes – if you want to enjoy this book, which I couldn’t put down and is truly laugh-out-loud funny. After dropping a number of f-bombs, the Robicelli’s warn you right off the bat that you’re probably thinking that cupcakes are stupid. And they agree with you, that many cupcakes are. But they make their case saying cupcakes are basically individual-sized versions of cake, which they say is one of the top five things in the world. And everyone likes cake – so why the hate? 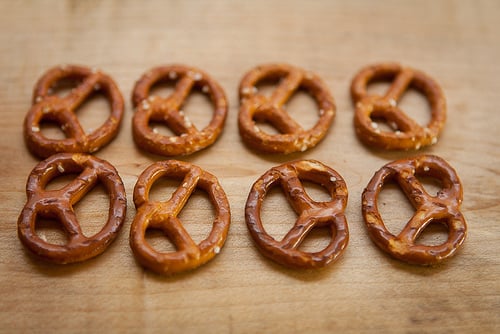 You won’t find any red dye, blue frosting, or cupcakes sprinkled with glitter in their book, or apparently, at their bakery. And perhaps the best line in a cookbook for this year is on page 15, talking about butter, and staving off all the people who want to substitute something else – “If you’re looking for a way to make a healthy, low-fat dessert, try eating a peach. Those are delicious.” Good advice! 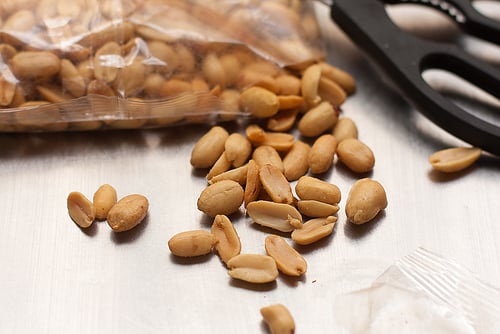 Being Brooklynites, they don’t take getting dismissed easily and the several pages that make the case for cupcakes is a pretty strong argument in their favor. But they don’t just love baking cupcakes; the book is subtitled “a love story” because in addition to discussing how they arose from tragedy, after 9/11 (Matt was a FDNY paramedic who sustained an injury during that time), the book goes off in a number of directions, recounting the fun, and the difficulties, of finding love and opening a bakery together during a particularly economically challenging time. And how they ultimately succeeding by creating an adult kaleidoscope of cupcake flavors that are distinctly different from what one thinks of when it comes to cupcakes. 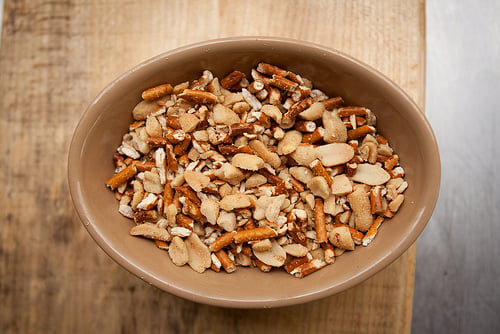 I won’t repeat their reason why you shouldn’t use artificial sweeteners (because it made me kind of queasy), but I was won over to their way of baking instantly and found their humor truly original for cookbook authors. There was a good number of the recipes in the book that I mentally bookmarked, but when I landed on the Chocolate, Peanut Butter, Pretzel cupcakes topped with crushed peanuts and pretzels, and drizzled with chocolate, I hit the supermarket for lait fermenté (buttermilk) and pretzels, pulled out my muffin tins, and started baking. 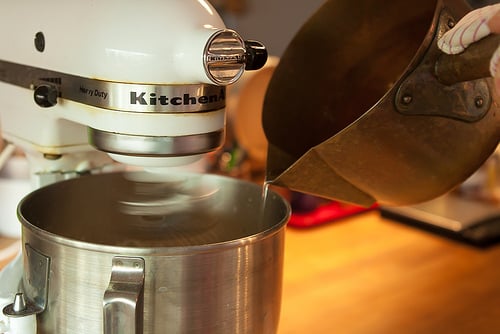 There are two frosting recipes in the book. One is a basic “American” frosting, and the other a French buttercream, which they swear (figuratively, rather than literally, in this instance) would be the best choice. So I whipped up a batch in my stand mixer. There are comic strips to help you through the process in the book, which is a pretty snappy way to make something look easier than it sounds. But you will need a stand mixer to make it. And it’s imperative that you swap out the paddle for the whip once you begin adding the butter, or you’ll be cursing your broken mixer. 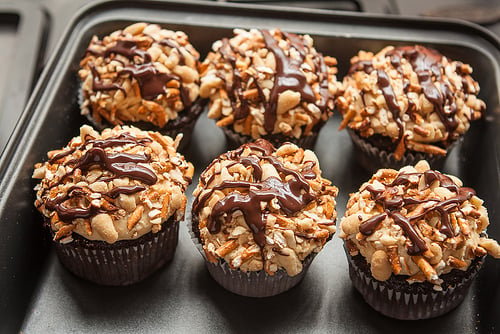 Cupcakes have hit France, as they have elsewhere, although most folks stick to the common varieties. And even though peanut butter isn’t a local favorite (French people eat peanuts as bar snacks, but peanut butter is generally disliked) – I was happy to break into my stash of it for these, to share with friends and neighbors. The recipe took more peanut butter than was initially indicated, but the Robicelli’s say to keep adding more, until you get the frosting to your liking.

Adapted from Robicelli’s: A Love Story with Cupcakes by Alison and Matt Robicelli The Robicelli’s gave a choice of French buttercream, or an American frosting, with a recommendation that the French buttercream is the better option for these cupcakes. It’s a little more involved to make it and since I’m always looking for any excuse to use my copper candy pot, I was happy to be given a chance to do so. The recipes make a lot of cupcakes – nearly two dozen. Because the recipe comes from a bakery, it’s hard to scale down recipes for home-sized portions. (Well, depending on your home.) If you don’t have neighbors or friends you’d like to give cupcakes to, you can freeze the baked cupcakes and the leftover buttercream separately for up to two months, and use them at a later date. Before making the recipe, check the notes at the end for a few extra tips.
Chocolate Cupcakes
3/4 cup (75g) Dutch-process cocoa powder
2/3 cup (160ml) very hot coffee
2/3 cup (160ml) buttermilk
1/2 cup (125ml) vegetable oil, such as canola or grapeseed
1 teaspoon vanilla extract
1 large egg
1 large egg yolk
1/2 teaspoon kosher or sea salt
1 1/3 cup (190g) all-purpose flour
1 3/4 cups (350g) sugar
3/4 teaspoon baking powder
1/2 teaspoon baking soda
Peanut Butter Buttercream
1 cup (250ml) water
2 cups (400g) sugar
2 tablespoons light corn syrup
1/4 teaspoon cream of tartar
5 large egg yolks
1 large egg
1/8 teaspoon thxanthan gum
1 1/2 pounds (680g) butter, cold
3/4 cup (180g) natural peanut butter, plus additional if necessary
1/2 teaspoon vanilla extract
1 teaspoon kosher or sea salt
Pretzel-Peanut Topping
3/4 cup (110g) roasted peanuts
1 1/2 cups (90g) broken up large pretzels
Chocolate Ganache
1/4 cup (60ml) heavy cream
2 ounces (55g) chopped bittersweet or semisweet chocolate
pinch kosher or sea salt
1. To make the cupcakes, preheat the oven to 350ºF (180ºC) and line two 12 cup muffin pans with cupcake liners.
2. Mix the cocoa powder and hot coffee together in a medium bowl, stirring until it’s a thick paste. In a separate bowl, stir together the buttermilk, oil, vanilla, egg, egg yolk, and salt. Gradually stir the buttermilk mixture into the cocoa, mixing until smooth.
3. Sift together the flour, sugar, baking powder, and baking soda.
4. Stir the dry ingredients into the cocoa mixture just until combined. Divide the batter between in the muffin cups so each is 2/3rd full; depending on the size of your cups or molds, you may get a few less. (You can pour the batter into a measuring cup or use a spring-loaded ice cream scoop to portion the batter more easily.)
5. Bake the cupcakes for 20 to 25 minutes, until the centers lightly spring back when you touch them. Let cool completely.
6. To make the peanut butter buttercream, put the water, sugar, corn syrup, and cream of tartar in a heavy, nonreactive saucepan fitted with a candy thermometer.
7. Put the egg yolks and the egg in the bowl of a stand mixer fitted with the whip attachment. Turn the mixture to high speed and let whip until the eggs become thick and hold their shape. When the sugar syrup reaches 235ºF (113ºC), turn off the mixer, add the xanthan gum, then turn it back on. With the mixer on medium-high speed, rest the syrup pot against the side of the bowl and gradually pour the syrup into the eggs in a slow, steady stream – making sure to aim between the sides of the bowl and the whip. Do not pour too fast, or you’ll scramble the eggs.
8. Turn the mixer back to high and whip until the side of the bowl feels cool to the touch. (The authors wisely recommend using the inside of your wrist for a more accurate gauge.) Once the mixture is cool, remove the whip and replace with the paddle attachment. Cut the butter into tiny slivers or bits, no thinner than a slim coin or no larger than peas, and add them one-by-one while the mixer is going at medium-high speed. (If you have a pouring shield, you might want to use it as the buttercream can splatter – a towel draped over the top can work to contain splatters as well.)
9. Continue beating and adding the butter until it’s all added and smooth.
(They offer some tips in the book in case your buttercream is slightly separated – namely adding a bit more butter – but adding the peanut butter in the next step should bring it back to smoothness, if necessary.)
10. When done, switch the speed to low and add the peanut butter, salt, and vanilla. Taste, and add more peanut butter a tablespoon at a time, if desired, until the right taste is achieved. You can add more salt as well.
11. Spread the buttercream thickly over the cupcakes, or pipe it in mounds over each cupcake, using a pastry bag fitted with a large plain tip (1/2-inch, 1,75cm), then refrigerate the cupcakes for 20 minutes. If you don’t use it all, see the notes for freezer storage.
12. Pulse the peanuts and pretzel pieces in a food processor, or crush in a ziptop bag with a rolling pin, just enough so there are a few bigger, unruly pieces, here and there. Dump the mixture into a bowl and press the tops of the cupcakes in the pretzel mixture; if it doesn’t stick well, let the frosted cupcakes sit at room temperature to warm up a bit.
13. To make the ganache, warm the cream in a small saucepan until almost boiling. Remove from heat and add the chopped chocolate. Let sit 2 minutes, then stir until smooth. If it’s too thick to drizzle, add a touch more cream to thin it out. Use a teaspoon to drizzle the chocolate ganache over the cupcakes.

Serve the cupcakes at room temperature. You can chill them for up to a day or two before serving, although the pretzels on top will soften. If you plan to refrigerate them for 1-2 days, frost cupcakes the cupcakes and chill them, then dip in the peanut-pretzel mixture the day of serving.

Notes: The Robicelli’s recommend that you use “European-style” butter in their French buttercream, which has a higher fat content than regular butter. A number of brands in the United States make European-style butters, which are available in supermarkets. And, of course, there are brands imported from Europe, such as Kerrygold.

I dialed up the amount of peanut butter in the buttercream. If you’d like it even more peanut buttery, you can add more, until you’re satisfied with the flavor.

I had a good portion of peanut butter buttercream leftover. (The Robicelli’s are more generous than I am.) Additional buttercream can be frozen in a ziptop freezer bag for up to 4 months, and used to ice a batch of brownies, a loaf cake, or a future cupcake project.

The authors mention that if you add the butter too fast, it can curdle. That didn’t happen to me but they advise if it does, turn the mixer to medium-high speed and add bits of butter, piece-by-piece, until it comes back together.

To tell if your cocoa powder is Dutch-process, it will either say so on label, or an alkalizing agent will be listed in the ingredients. For more information, check out Cocoa Powder FAQs.

The xanthan gum is added to their buttercream to help stabilize it. I don’t know if it’s entirely necessary (I’ve never added it to buttercream I’ve made before.) So if you don’t have it, or can’t find it easily, you could probably omit it. (You can buy it at natural food stores or on Amazon.) If you do try it without the xanthan gum, let me know in the comments how it works out.

I got a little OCD with the pretzel-peanut mixture and sifted it through a mesh sieve to remove any small nut dust and crumbs, for a neater appearance. To avoid being left with smaller pieces for the last few cupcakes, give the mixture a stir between dipping the cupcakes.