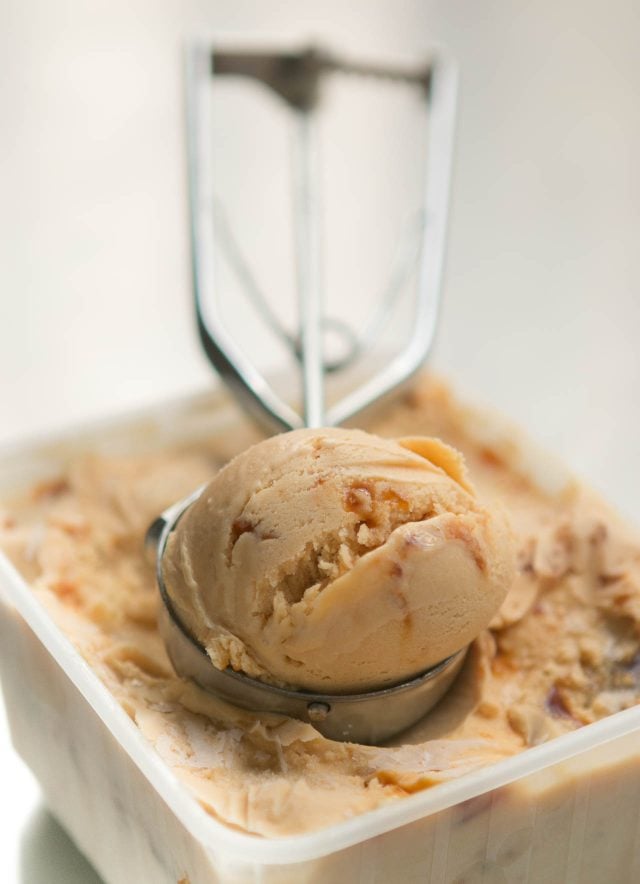 When I was finalizing the recipes in The Perfect Scoop, I wrote too many recipes and needed to make room for all the other stuff that goes into a cookbook. Although I did include a favorite recipe for Pear Caramel Ice Cream, which gets its smooth richness from caramelized pears, I decided since my first book had a great recipe for Caramel Ice Cream (that book was re-released as Ready for Dessert), I figured that recipe would suffice for caramel ice cream fans. 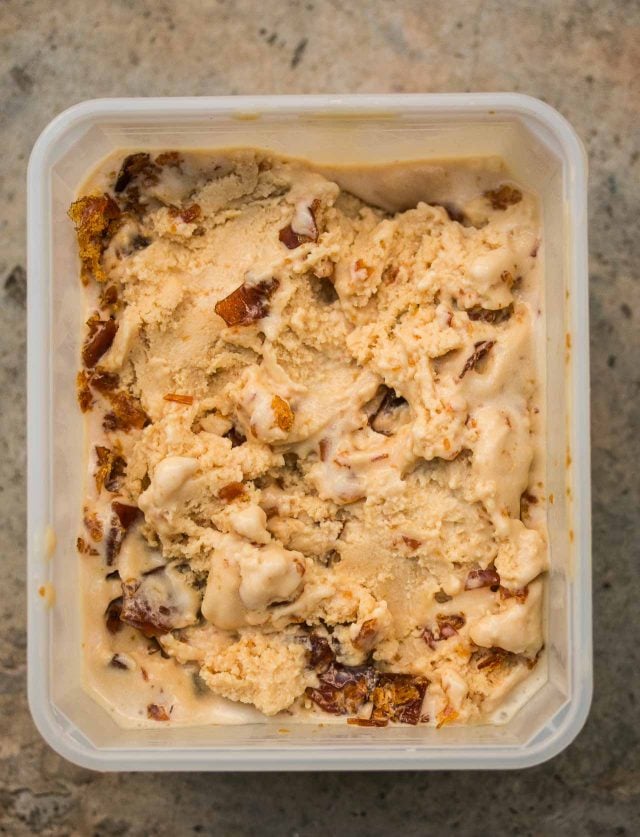 Then came along salted butter caramel, which back then, raised a few eyebrows. “Salt…in ice cream?” I heard more than once.

So today I’m re-presenting my very own recipe for Salted Butter Caramel Ice Cream. I posted this about a decade ago, but I wanted to revisit it since so many people told me this was their favorite ice cream of all time. In this newer version I’ve reduced the sugar, which helps the ice cream firm up in the freezer, and made a few other tweaks. 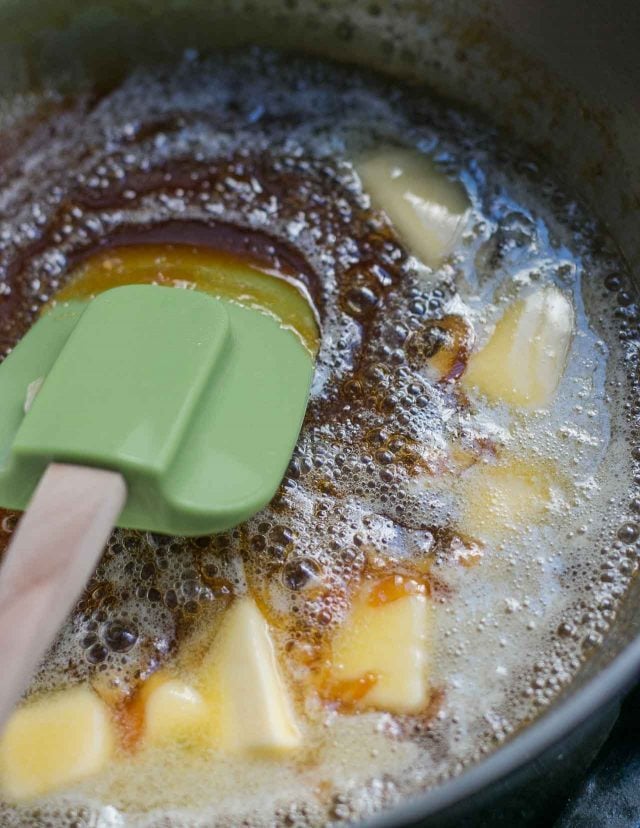 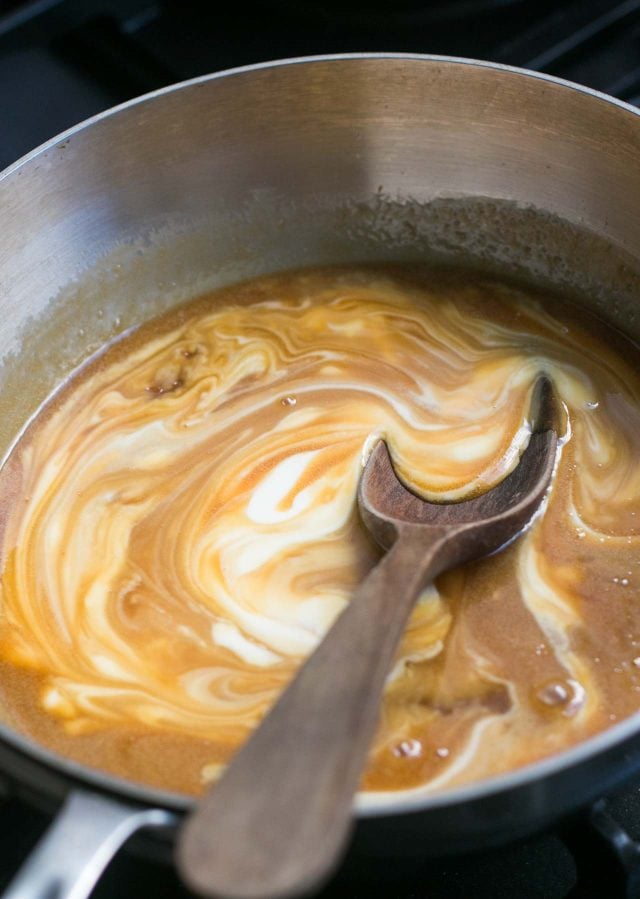 It’s not difficult to make good caramel but the secret is to cook it far enough so it’s slightly burnt. Otherwise it just tastes like syrupy sugar and won’t have the same rich caramel flavor in the finished ice cream. If you’ve never caramelized sugar, there are complete guidelines for caramelizing sugar at my post Making the Perfect Caramel which you may want to read before you get started. Once you’ve made a few and get the hang of it, it’s pretty easy. 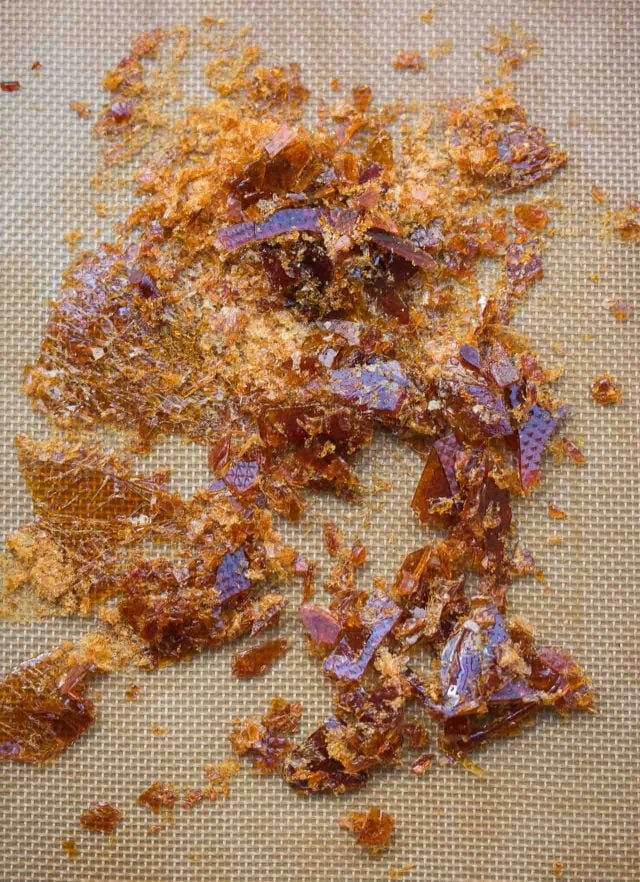 You want to take the sugar right to the edge of darkness, then stop it there with the addition of a few cubes of salted butter. It’ll melt into a buttery caramel that’s so irresistible, you’ll be tempted to stick your finger in for a taste. But please don’t…it’s extremely hot. You’ll just have to wait. But I assure you, it’ll be worth it. 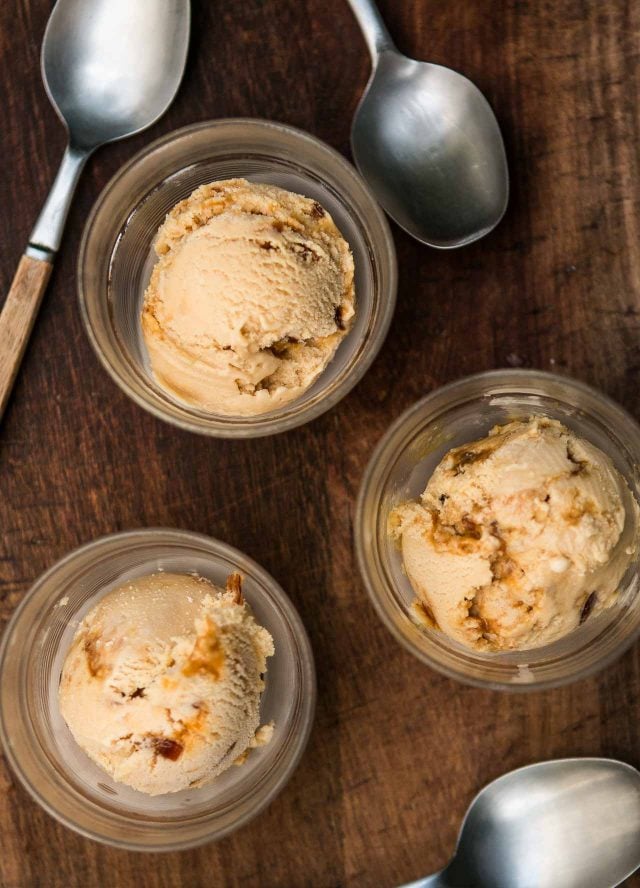 Be sure to use good salt. I use fleur de sel, but if you don’t have it, a mild-tasting sea salt will do in a pinch, such as Maldon, fine gray salt, or kosher salt. Don’t use ordinary fine table salt; it’s far too harsh. In step 6, all of the caramel may not dissolve. Stirring it over very low heat should melt any stubborn bits. If not, don’t worry; they’ll be strained out later. Because of the caramel in this ice cream, once churned and frozen, it’ll remain nice & creamy. As noted, this is an update from a previous recipe which had 1 1/2 cups (300g) for sugar in the caramel custard, which some readers reported made the finished ice cream quite soft. I reduced it by 1/4 cup (50g). But if you like the caramel flavor stronger, you’re welcome to use 1 1/2 cups of sugar in step #5.
For the caramel praline (mix-in)
1/2 cup (100g) sugar
3/4 teaspoon sea salt such as fleur de sel (see headnote)
For the ice cream custard
2 cups (500ml) whole milk (divided)
1 cup (240ml) heavy cream, warmed
1 1/4 cups (250g) sugar
4 tablespoons (60g) salted butter, cubed
scant 1/2 teaspoon sea salt
5 large egg yolks
3/4 teaspoon vanilla extract
1. To make the caramel praline, spread the ½ cup (100g) of sugar in an even layer in a medium-sized, unlined heavy duty saucepan: I use a 6 quart/liter pan. Line a baking sheet with a silicone baking mat or brush it sparingly with unflavored oil.
2. Heat the sugar over moderate heat until the edges begin to melt. Use a heatproof utensil to gently stir the liquefied sugar from the bottom and edges towards the center, stirring, until all the sugar is dissolved. (Or most of it—there may be some lumps, which will melt later.) Continue to cook stirring infrequently until the caramel starts smoking and begins to smell like it’s just about to burn. It won’t take long.
3. Without hesitation, sprinkle in the ¾ teaspoon salt without stirring, then pour the caramel onto the prepared baking sheet and lift up the baking sheet immediately, tilting and swirling it almost vertically to encourage the caramel to form as thin a layer as possible. Set aside to harden and cool.
4. To make the ice cream, make an ice bath by filling a large bowl about a third full with ice cubes and adding a cup or so of water so they’re floating. Nest a smaller metal bowl (at least 2 quarts/liters) over the ice, pour 1 cup (250ml) of the milk into the inner bowl, and rest a mesh strainer on top of it. Warm the cream in a small saucepan or microwave oven and set aside.
5. Spread the 1 1/4 cup (250g) sugar in a large saucepan, with a capacity of at least 4qts/4l, in an even layer. Cook over moderate heat, until caramelized, using the same method described in Step #2.
6. Once caramelized, remove from heat and stir in the butter and salt, until butter is melted, then gradually whisk in the warm cream, about 1/4 cup at a time, stirring as you go. The caramel may harden and seize, but stirring it over low heat should encourage those bits to melt. (A few bits may be stubborn, which will dissolve or can be strained out later.) Stir in the remaining 1 cup (250ml) of the milk.
7. Whisk the yolks in a small bowl and gradually pour some of the warm caramel mixture over the yolks, stirring constantly. Scrape the warmed yolks back into the saucepan and cook the custard using a heatproof utensil, stirring constantly and scraping the bottom as you stir, until the mixture thickens. If using an instant-read thermometer, it should read 160-170ºF (71-77ºC).
8. Pour the custard through the strainer into the milk set over the ice bath, add the vanilla, then stir frequently until the mixture is cooled down. Refrigerate at least 8 hours or until thoroughly chilled.
9. Freeze the mixture in your ice cream maker according to the manufacturer’s instructions.
10. While the ice cream is churning, crumble the hardened caramel praline into very little bits, about the size of very large confetti (about ½-inch, 1 cm). You can use a mortar and pestle or place it the caramel shards in a sturdy freezer bag and crush them with a rolling pan. If you used a silicone baking mat, you fold the mat repeatedly to crumble the caramel into bits.
11. Once your caramel ice cream is churned, quickly stir in the crushed caramel, then chill in the freezer until firm.

Variations: Add some strong liquid espresso (or instant espresso powder) to the custard to taste, prior to churning the ice cream to make Coffee-Caramel Ice Cream.

Other options might be some of the mix-ins in The Perfect Scoop, like gooey Dark Chocolate Truffles, crackly chocolate Straciatella, or Oatmeal Praline folded in at the last minute.

This is also excellent served with warm Mocha Sauce (page 166), although it’s also excellent melting over sautéed apples or alongside a wedge of apple pie or tarte Tatin for a caramel double-whammy.

For tips on ice-cream making equipment. You’ll find suggestions at my Amazon Ice Cream Shop and at my Meet Your Maker post.

If you don’t have an ice cream maker, check out Making Ice Cream Without a Machine. 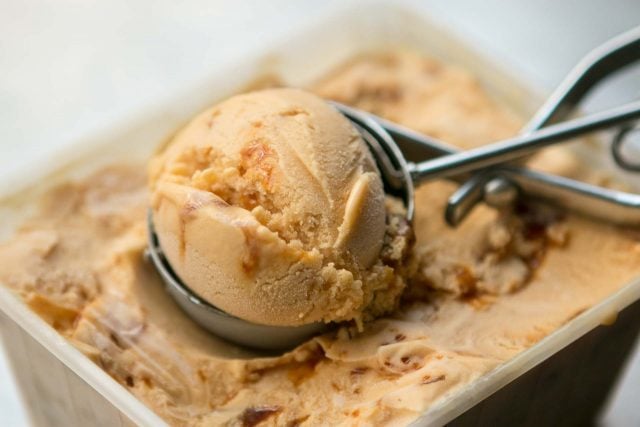