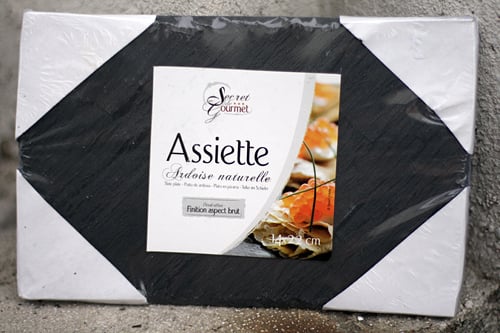 Since I arrived in Paris a while back, a number of food tendances have slipped into our vocabulary. From appetizers served in Chinese-style spoons, to the alarming addition of adding sugar to savory hors d’oeuvres, I’ve learned to become diplomatic when faced with a plate lined with white porcelain spoons with a dollop of minted pea puree topped with a touch of crème fraîche and three salmon eggs in the middle, or a beef cubes dipped in caramel and garnished with a raw quail egg and a strawberry-flavored marshmallow. But I’m still having a little trouble with slate plates. And I’m not the only one.

I don’t know when they started, but perhaps it was because the transition was slow, so that I barely noticed them rockin’ the tables. At first, it made sense: You have cheese or charcuterie, both rustic products from the earth, so offering them forth on a sturdy rectangle of material which shares the same humble beginnings seems like a natural coincidence. But then things kind of got out of hand. 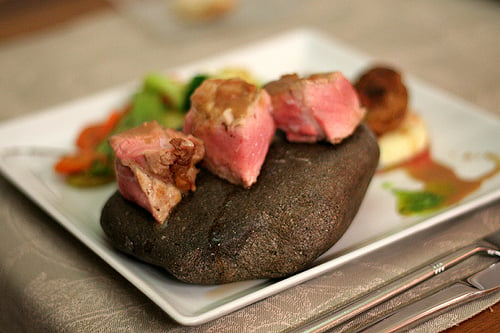 I was eating in a rather good restaurant in the south of France, where the chef touted the use of fresh ingredients from le marché. Except I don’t think one can mine for rocks at le marché in Paris. And I’m not sure I want to. (And I’m sure the waiters in Paris are hoping that trend doesn’t catch on. Because, man, when that waiter came out of the kitchen with the rock teetering on that slippery plate, considering the look of abject terror in his eyes, I was certain someone was going home with a broken foot that night.)

But what has taken off in Paris are les assiettes d’ardoise, and I’m not sure the waiters – or diners – are all that much happier. For one thing, if you’ve ever watched a garcon reaching far across a table, trying to pry a flat piece of stone off of a flat table top, you can almost hear the cracking fingernails as they try to dig their digits underneath the weighty stone.

I did a little digging – although not with my fingernails – and saw that perhaps the trend started in Spain, (or Germany, or England, or Chichester, or Norway, or somewhere else), then percolated up and over to Paris. But it sets my teeth on edge if I have to scrape a knife across the surface of a slab of slate, trying to cut my steak frites with a serrated blade and listen to it rake cross the surface of the “plate.” Honestly, the noise and sensation makes fingernails scraping a chalkboard feel as soothing as a Karen Carpenter song in comparison. 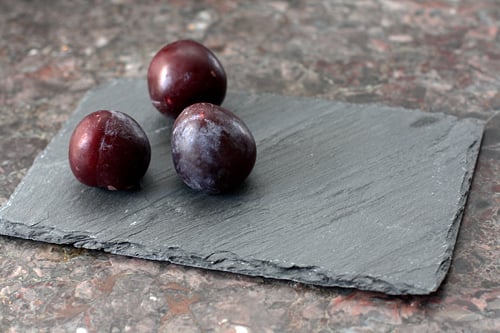 In spite of my scratchings here about the subject, I’m sure no one who’s in a position to do anything about slate plates is reading my concerns. But if they are, it’s not too late to stop. We’ve already had at least one stone age, so perhaps it’s about time for another – and then, at last, this one can be long forgotten. Because I’m sure when the next 10,000 years pass and scientists dig up our remains, and find rectangles of the raw stones that we’ve been eating off of, they’ll be scratching their heads. But at least they won’t be scratching their plates anymore. At least I hope for their sake they’re not.