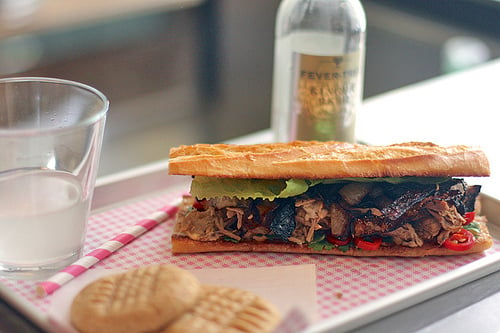 [UPDATE: Verjus is no longer serving sandwiches in their wine cellar, nor are they open for lunch. The regular restaurant is still open for dinner and the wine bar is open in the evening for wine and top notch bar snacks.]

A friend who’s been living here quite long time once wondered aloud to me, why Parisians sandwich-makers weren’t more creative. I never really thought about it; because I buy sandwiches so infrequently, I’m really happy to have a simple, classic jambon-fromage with a smear of butter on a baguette. But I suppose if I ate sandwiches daily, like so many people now do, that I’d also want a little diversity between the slices. (In my defense, I’ll sometimes see if I can get goat cheese on my sandwich, rather than the usual Emmenthal.)

That probably explains in popularity of the Subway chain in France, who offers something different from the French classics. According to their website, they now have around 66 outlets in Paris. But I’m not joining the lines, though, because it’s where I had one of the worst sandwiches of my life back in the states. You’d think it’s pretty hard to f-up a sandwich. Thankfully, things have taken a turn for the better. 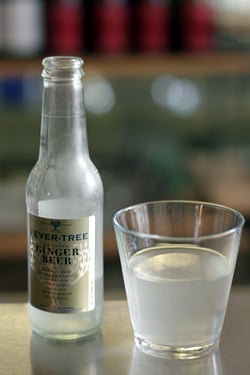 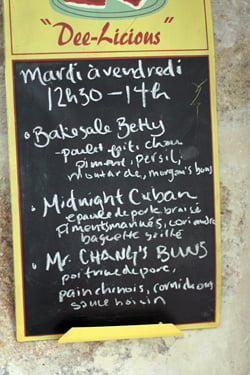 So for those who say les sandwiches lack creativity, you’ll be pleased to know that a number of places have popped up in Paris, such as Pressing, a food truck that is doing Panini sandwiches, and Abri, which I’ve yet to go to, but is doing what folks tell me are great sandwiches, but only for Saturday lunch (no reservations). And I just passed a branch of the bakery chain Paul that has put out a sign that they’re offering hot sandwiches, too. But when I heard that Verjus was doing them as well, and daily, and one included fried chicken, I could barely wait to get my derrière over there. 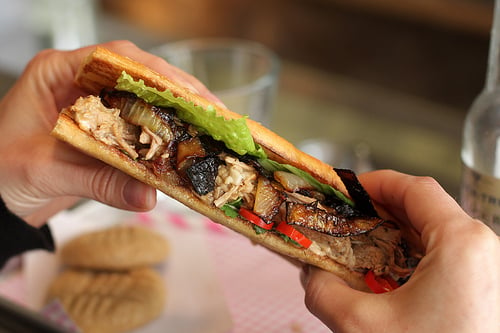 My all-time favorite food is fried chicken, but I guess I’m not the only one around here. Because a few nights ago, it was funny to see two ‘ipsters near the Place de la République (in French, the “h” is silent) toting budging bags of KFC. I’m not sure hipsters in Brooklyn or Portland would do that, nor would I (well, maybe if no one was looking…) but I felt their pain and was really jonesing to get my fried chicken fix. So I headed to Verjus for le sandwich poulet frit. 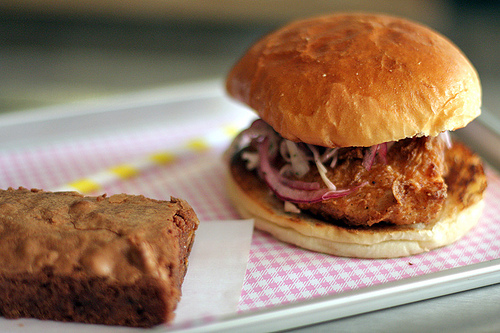 There are three sandwiches on the menu at Verjus, each an homage to a different style of cooking. At present, one is pulled pork, another is fried chicken, and the other is very crisp pork belly with hoisin sauce, à la David Chang, which I went back and had the following week. (It’s kind of spicy, and probably my favorite.) It’s €15 for a sandwich, drink, and cookies, or a brownie, or whatever sweet they are making that day, to eat in. Or you can take it to go, and eat in the nearby Palais-Royal. My fried chicken was just what I wanted, although I wouldn’t have minded a pile of the great Verjus fries alongside. And if they’d have added a few pickles, too, well, I’d have been even happier. 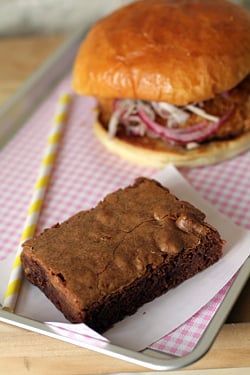 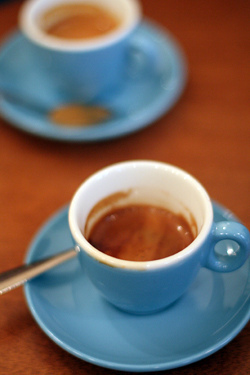 Afterward, you can head over to Telescope for a coffee, one of the newer places in Paris that is focusing their efforts on making quality espresso. We were early for lunch so had our coffee first. And while having coffee before lunch probably isn’t very Parisian, it’s nice to know that fried chicken finally is.

Sandwiches available in the wine bar Tuesday through Friday, 12:30 to 4pm.
No reservations.