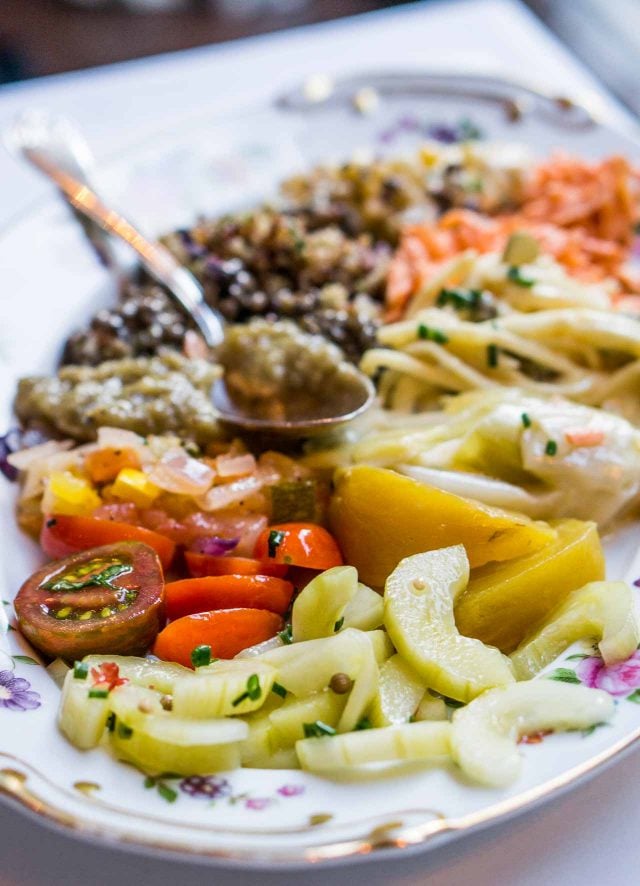 People are impressed with (and a little envious of) the French and their relationship to food, especially a meal. So much so that UNESCO added the gastronomic meal of the French to their list of Intangible Cultural Heritage designations. The gathering around the table to eat is something most cultures engage in, of course, but it seems to carry special importance in France. A French friend told me that in France, people don’t dine out so for the food as they do for the company. Which it’s why its nice with the two converge. 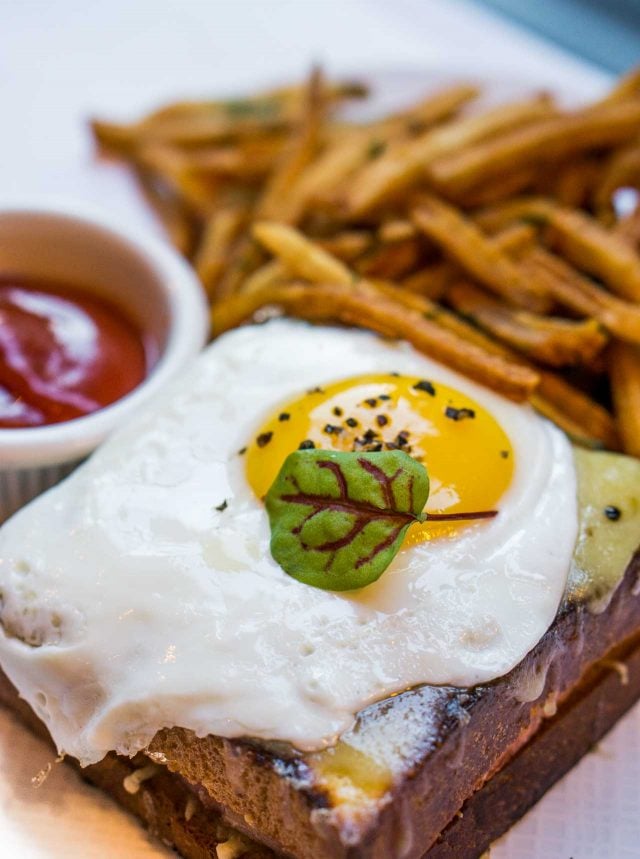 There are plenty of places to do that in France, but you find them elsewhere, too, which we did at Bistro Pierre Lapin in New York. Inspired by the easygoing bistros of France, this West Village spot was founded by Harold Moore and Julia Grossman. Harold is the chef while Julia is in charge of desserts and drinks, two of my favorite things to focus on as well.

The bistro is like a neighborhood café, and when you see French people lining the bar, enjoying a late afternoon apéritif, you’ll find yourself in a scenario that could transport anyone to France. We stopped in for dinner, enjoying a comfortable booth with a window looking outside, with no crazy-loud music turned up so you had to shout at each other just to get heard. It was nice to take a break from the rush of Manhattan and linger by a sunny window, admiring the view, and the food. 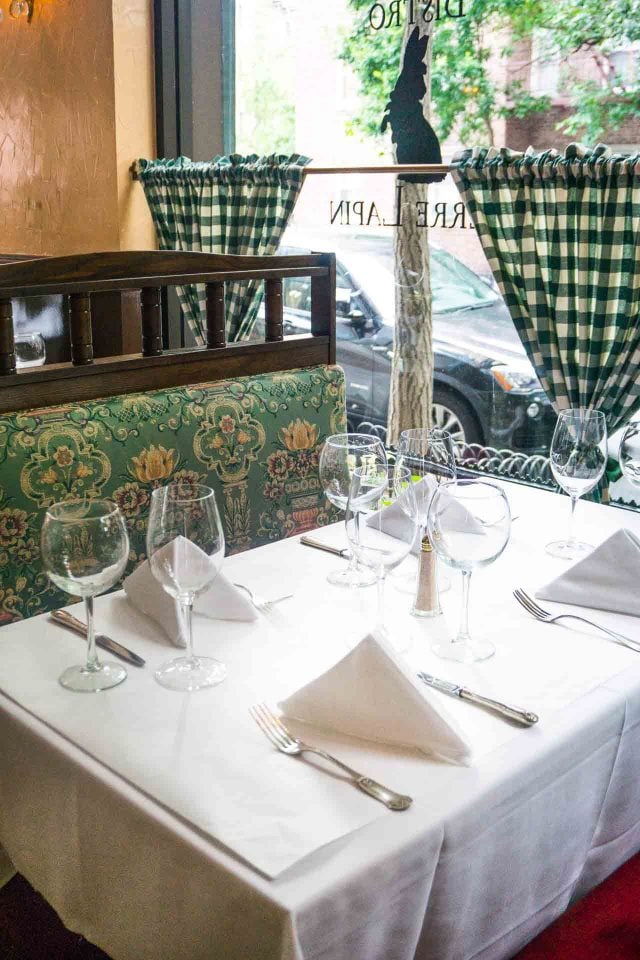 Unlike a traditional French bistro, this one had one of those cocktail lists that makes you want to order everything; nothing too fancy or showy, and it wasn’t overwhelming. Having just four items on it, you could conceivably order everything, I suppose. But we resisted. Romain had a lush Margarita Française with tequila, China-China (bitters), and calamansi juice. 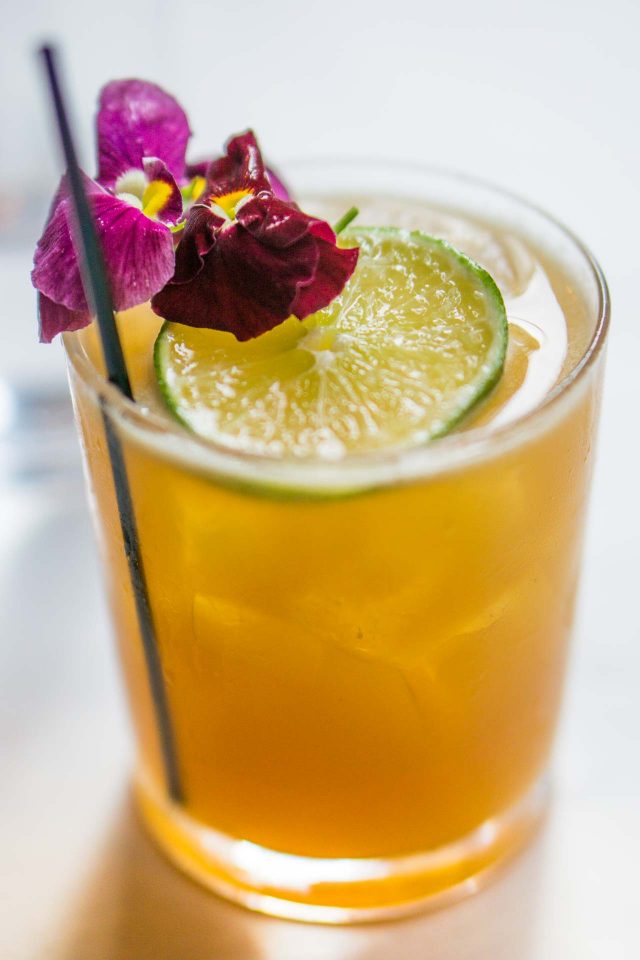 I went to the darker side with a 35-87, a cocktail that gets its name from the distance in miles between Cognac and New York, according to Google, Julia told me later. It’s made with Cognac, vermouth, bitters, and black cherry, and was just how I like a drink; tall, dark, faintly bitter, and without any pretense. Just a good cocktail, served straight up. 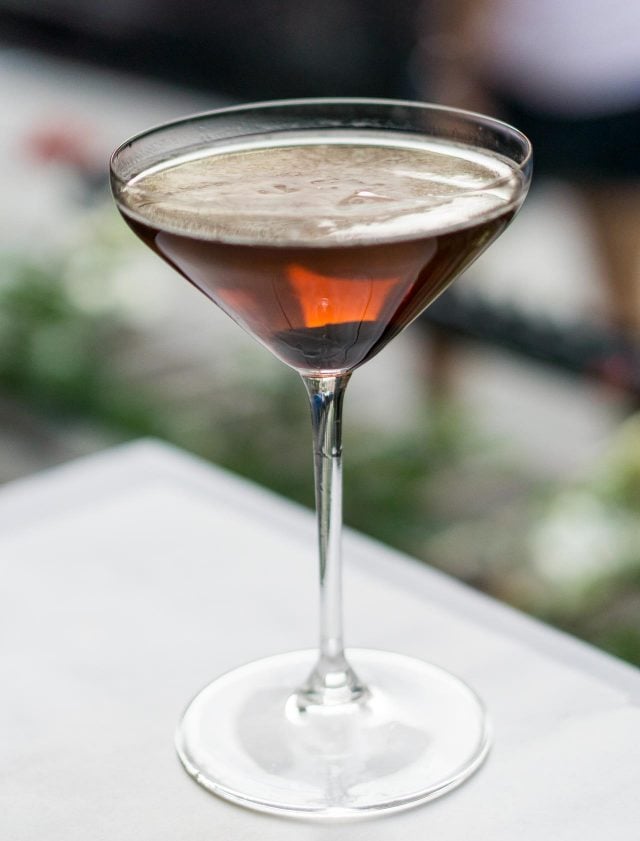 To nibble on with our drinks, they brought out a small bite of pâté made by the chef, served with a housemade baguette that was still warm, with a few olives and a smear of excellent butter. 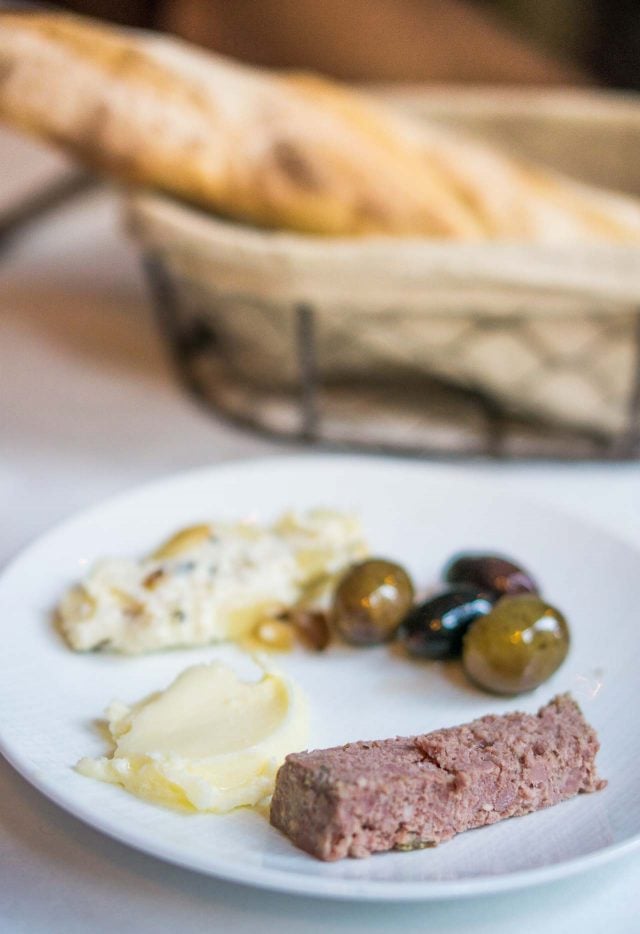 When you see the servers wheeling the vegetable cart around the dining room, it’s hard not to want to order Le Ravier, a melange of French-inspired vegetable salads, served tableside. Which we did.

Our favorites were the French classics; grated carrot salad, green lentil salad, and smoked eggplant caviar. I like the idea of such a bountiful plate of vegetables, but in France, you’d likely only get three salads on a plate (there might be exceptions, of course), but I’d rather focus on just a few salads rather than a lot of them all at once. But it was hard to argue at how beautiful they all looked together.

Harold worked at Daniel and Jean-Georges, and is who also co-owner of Harold’s Meat + Three, so knows a thing about meat. 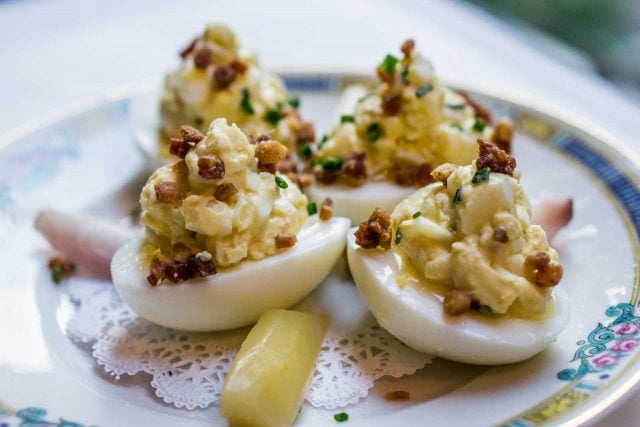 So he likely couldn’t resist adding bacon to another French classic, Œufs mayonnaise, with pickles in the filling, and topped with crisp bacon. When I met him later while passing through the dining room, he mentioned that bacon isn’t a traditional addition to this dish, but in the U.S., it’s likely to win over more converts. (Me? I’m already sold. It’s one of my favorite bistro dishes.) However it’s not something that’s overly fussed over in France, and while usually it’s just a few egg halves with mayo spooned over them, chefs and cooks sometimes have fun and play with them, too. The dish is so beloved in France that there’s the Association de Sauvegarde de l’Œuf Mayo (ASOM), to make sure it stays in the public limelight, where it belongs. 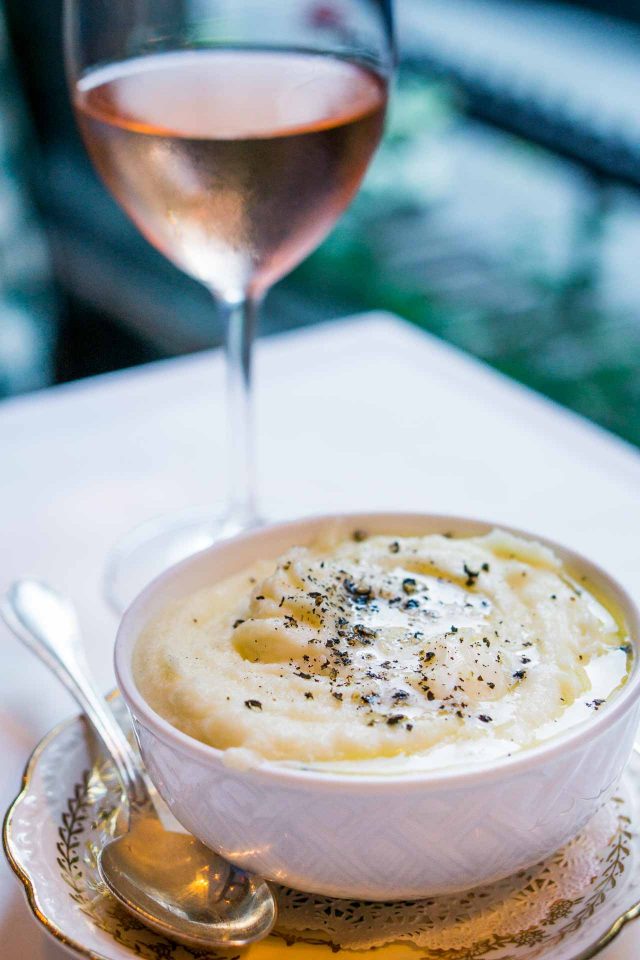 Speaking of things beloved in France, the silky, sinful butter-enriched mashed pommes purée, which are subtitled “the best mashed potatoes” at Bistro Pierre Lapin, certainly were. A very hot pot of purée PDT (shorthand for pomme de terre purée) came to the table that was rich and rife with butter, and probably some cream, topped with cracked black pepper, which is Romain’s new favorite condiment. (I like it, but he wants to put it on everything, and this bistro agrees.)

Since we were there during corn season, once Romain discovered fresh corn, he wants nothing else to eat when we go to the U.S. in the summer. I can’t say I blame him on that one. That’s what I want, too. 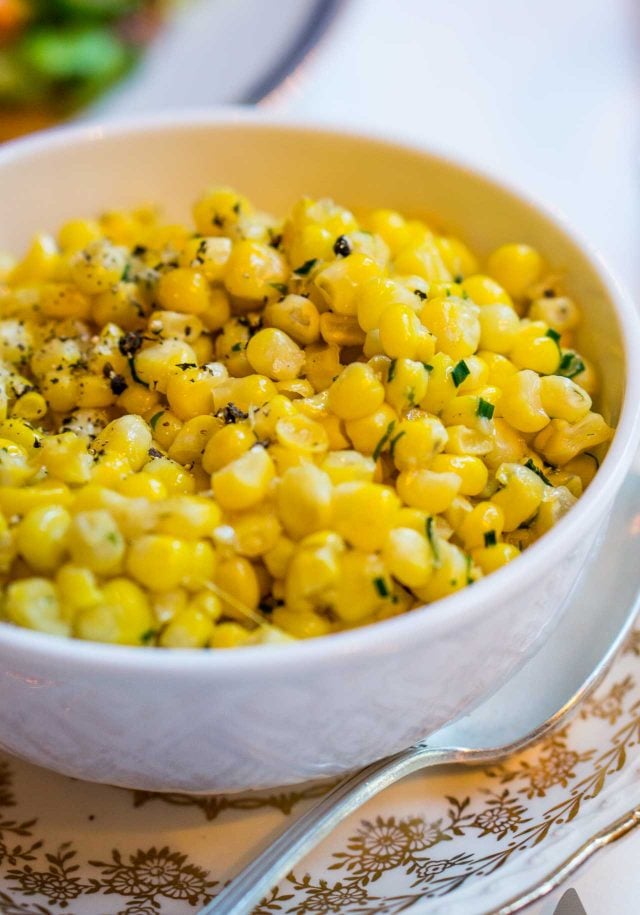 Back in France, I’d been craving a Croque Monsieur, which is my version of “black pepper,” I guess, and I want it all the time. But who can argue with a fried ham and cheese sandwich, held together with béchamel, and a giant mound of superb frites? 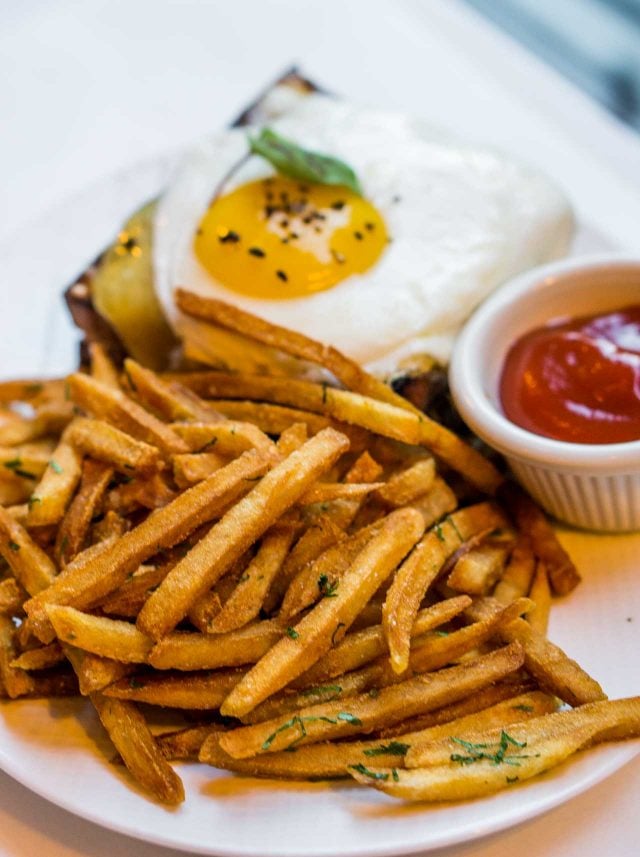 The French fries that came with my Croque (which was a Madame, due to the addition of an egg on top) were excellent because, 1) They were fried until deep golden brown, and 2) They were fried in clarified butter. The latter was another American touch that I haven’t seen in France, but let’s hope it comes soon. 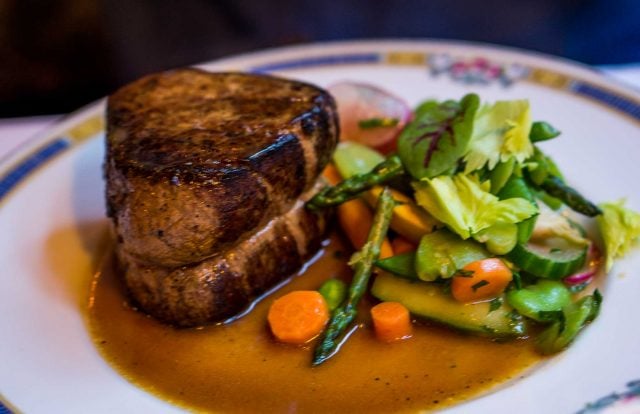 My Frenchman went for the Filet of beef with sauce Diane, a sauce made with pan juices that’s sometimes enriched with cream or butter, but here it was kept on the lighter side so it didn’t overwhelm the beef, which came out in an all-American portion. (So he took les restes home in le doggy bag.)

Dessert was an outstanding Pavlova with speckles of passion fruit seeds and pulp in between stars and swoops of meringue. I loved it. 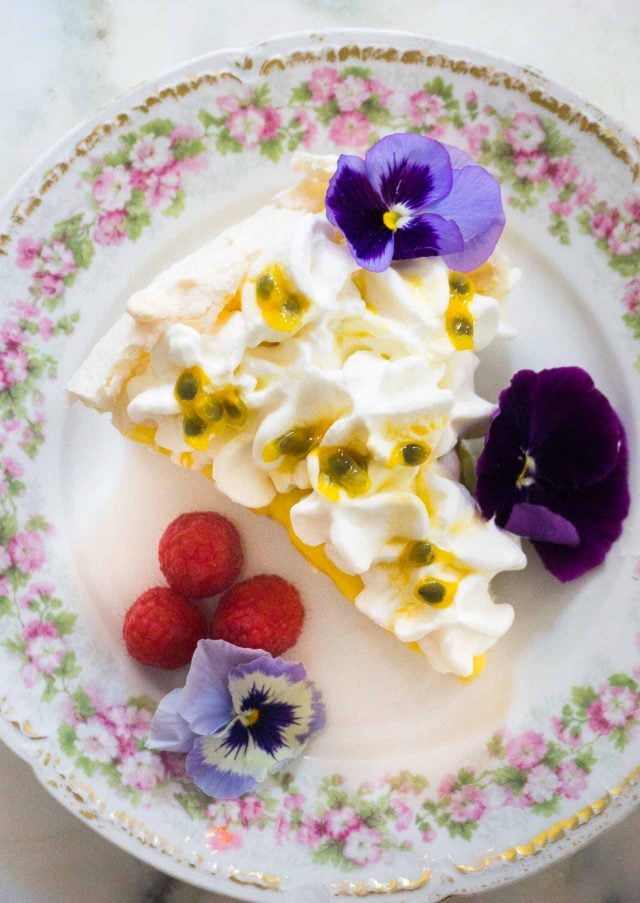 We finished off with glasses of Calvados, which Julia insisted we try. Being a Francophile, she’s collected some impressive French liqueurs and spirits behind the bar, and I was happy to taste this French apple brandy with an apple in the bottle. The bottle is placed over the branch of the tree and the apple grows in it. Once it’s matured, the apple is snipped from the tree and remains in the bottle, which is filled with Calvados. 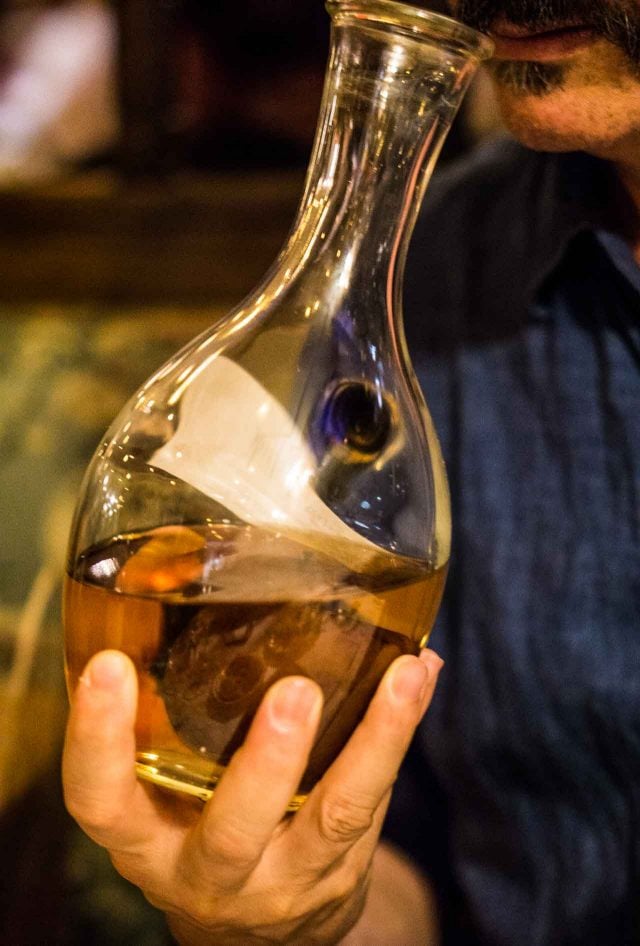 In Normandy, during a meal you’ll often have a glass of Calvados to create, what’s called, le trou Normand. It’s a small glass of the famed apple brandy between courses, to revive and restore your appetite. But I can’t say it works after dinner, as we hit the sack shortly after. 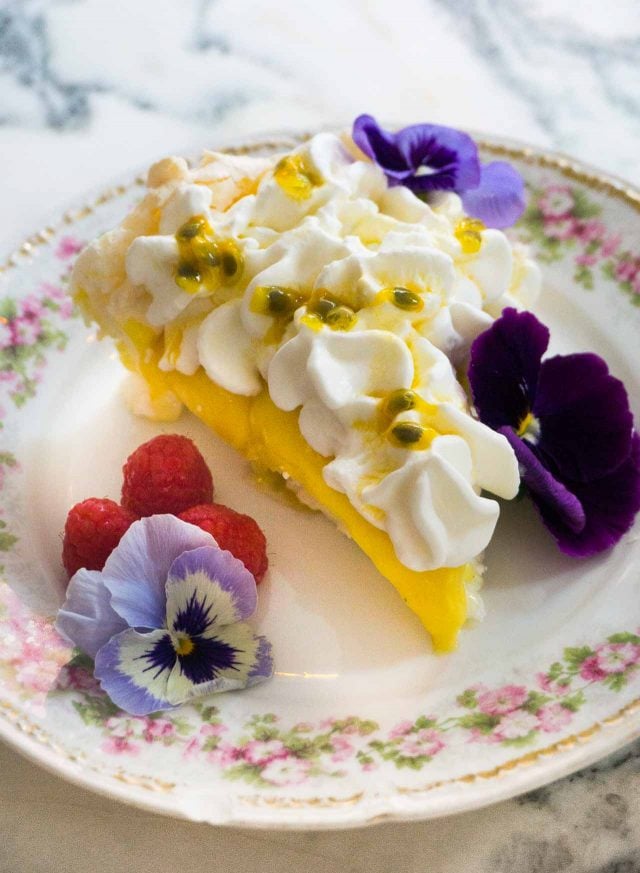 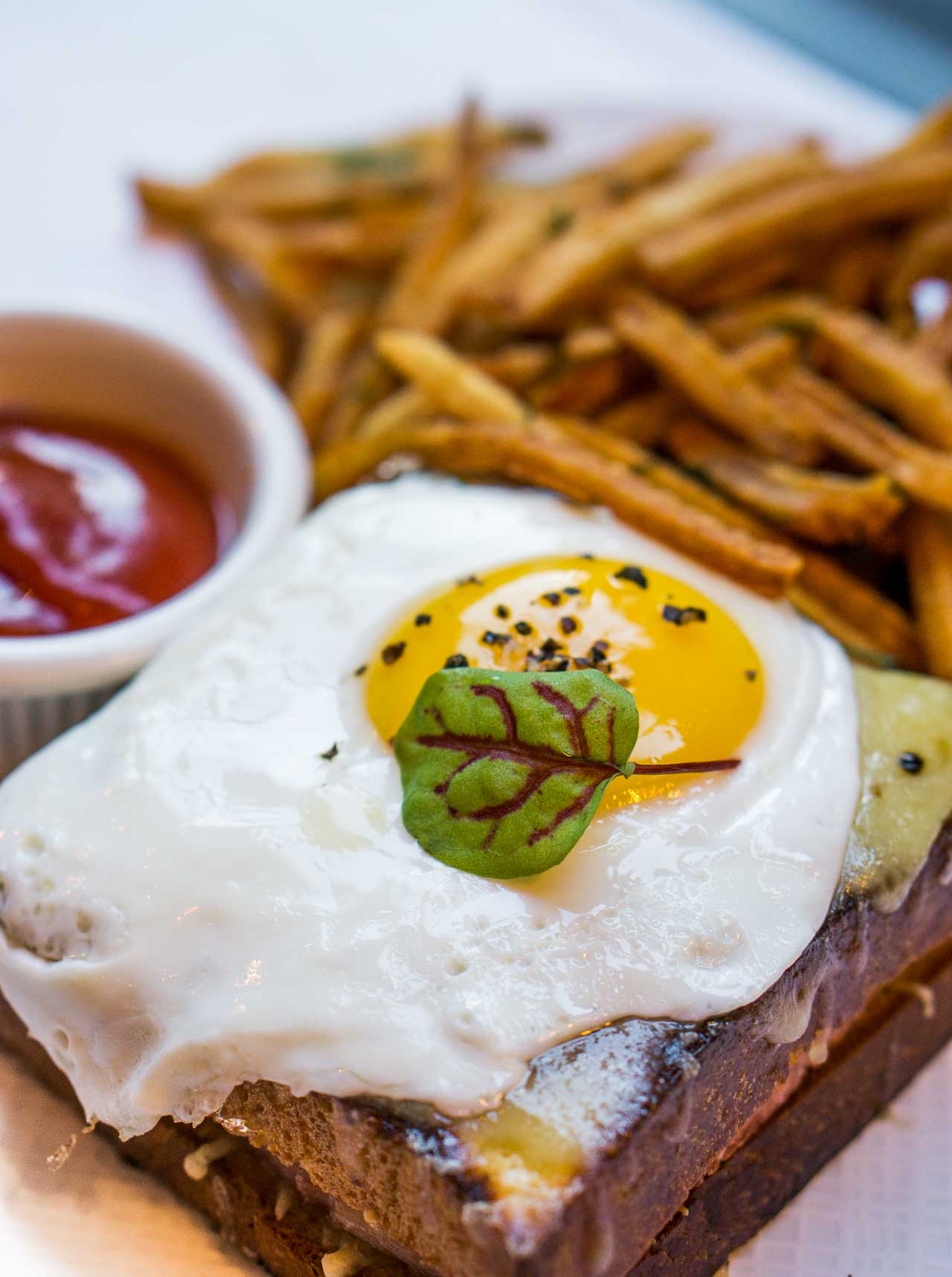