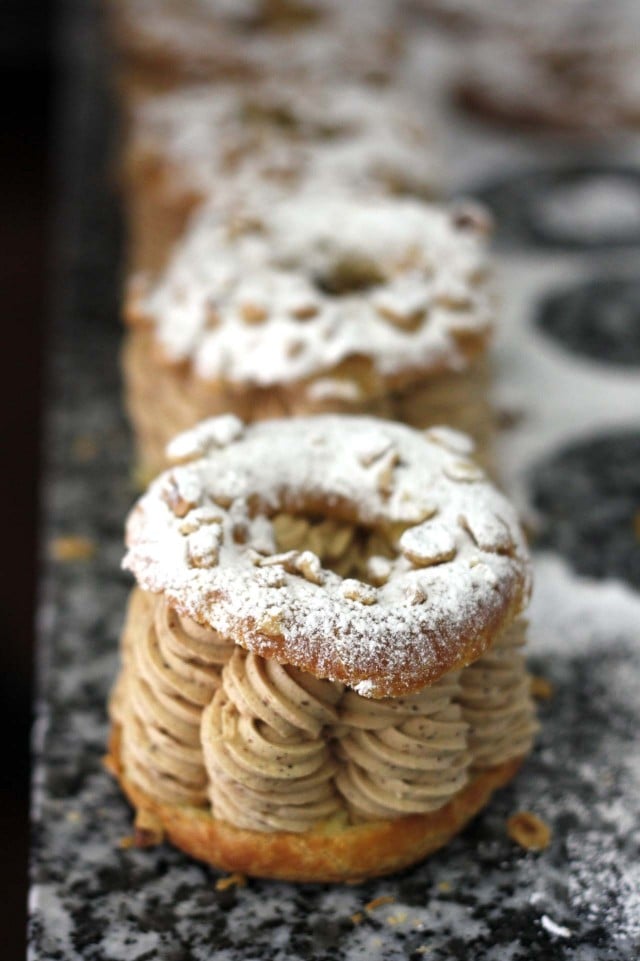 I first met Jacques Genin a number of years ago when he was (somewhat famously) working out of a battered storefront, on an uninteresting street deep in the 15th arrondissement of Paris. 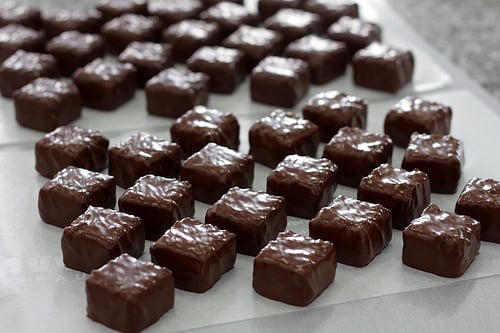 I say “famously” because as he became quite a bit better known, many folks learning about him through Mort Rosenblum’s book, Chocolate: A Bittersweet Saga of Light and Dark. And subsequently, people started gathering outside his workshop door with the one-way mirror, which allowed him to decide whether he wanted to open the door or not. I think I was too timid to give it a try on my first go-around and after pacing at the end of the block for a while, I ended up leaving. 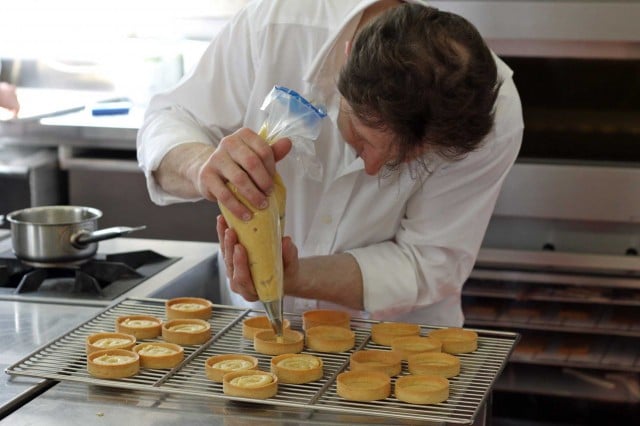 If nothing else, longevity has its rewards and eventually I made it past that mirrored door and into his workshop. It was rather tight in there, to say the least. In order for someone to walk past you, you had to back up and get out of the way while someone held a tray of just-dipped chocolates high in the air, sidestepping someone else walking the other way with a tray of hot nougat. 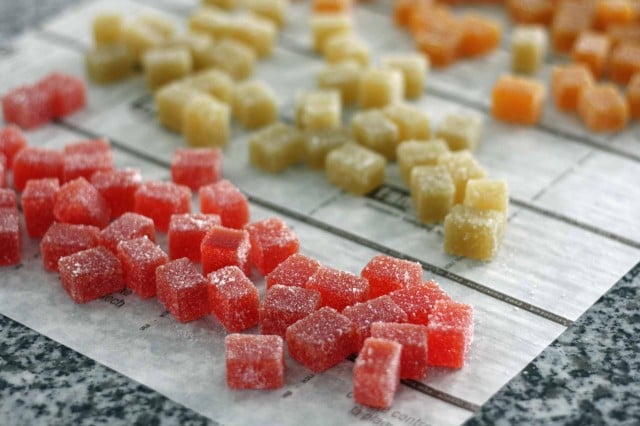 It was all kind of a dance that somehow worked in a space no larger than an average American living room. One had a big table of it in the center, so larger that there was just about a foot of space between the perimeter and the wall, for people to pass, and work.

The place wasn’t a store nor was it open to the public; he was only making chocolates and caramels for the fine hotels and restaurants in Paris to serve after dinner. But as his reputation grew, it was hard to remain so elusive and he opened a large, elegant wedge-shaped boutique in the northern part of the Marais. 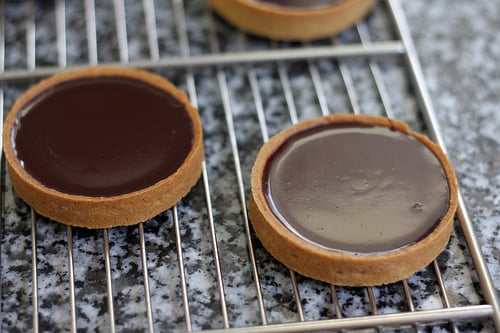 Now anyone can go, and no one has to pass the scrutiny of anyone. Well, except me.

But I’ll get to that in a minute… 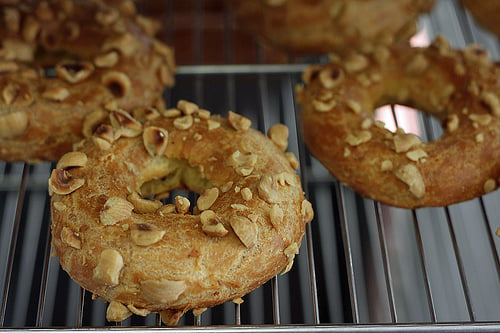 The shop is huge, a vast open area with a seating area for people to sip his famous chocolat chaud and perhaps have a pastry. Along one wall is a showcase of all his chocolates, neatly lined up, and another small showcase with housemade tarts and cakes inside, each one so perfect that even the most persnickety fussbudget couldn’t find a single fault with it. There’s not a single crumb out of place, nor an errant drop of cream running off the side. 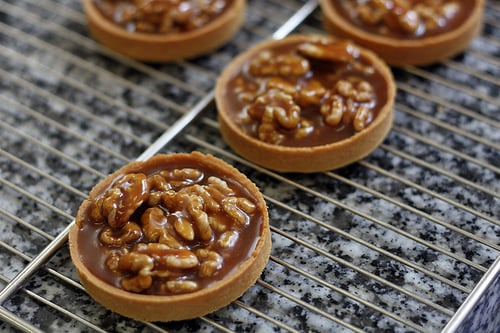 I don’t know if the word “frenemy” exists in French, but in spite of the fact that Jacques can be mercurial, I have a deep affection for him. And I think he kind of likes me, too: when he sees me biking past his place in the Marais, if I don’t brake for a chat, I know the next time I visit his place I’m going to get an earful about it.

(Actually, whether he sees me or not, I seem to be on the receiving end of quite a few earfuls whenever I stop by.)

Jacques is open and honest, not afraid to give his opinions, and is rightly proud of each and every chocolate, caramel, and pastry that comes out of his kitchen, located just up the winding starts from the boutique and tea salon. 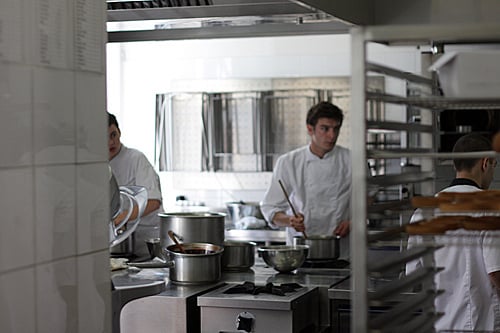 I spent a couple of days with him recently as he raced around the kitchen, giving someone a lecture for the infraction of setting down one of his luscious chocolate éclairs in the holder, just ever-so-slightly askew. No one else would have noticed it, including me, but he did, and made sure it was re-placed exactly, precisely right. 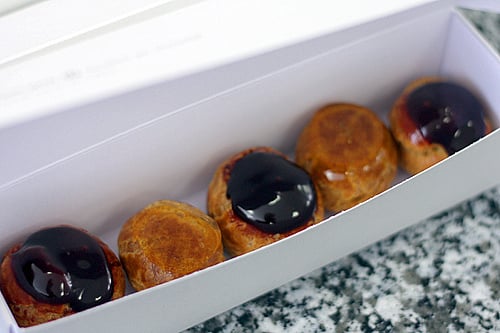 Another person was running a rasp-style grater over the tops of fragile tartlet pastries, ready to be filled with lime custard, so they wasn’t a single bump to detract from the singular perfection that he demands for each and every pastry and chocolate that comes out of his kitchen. 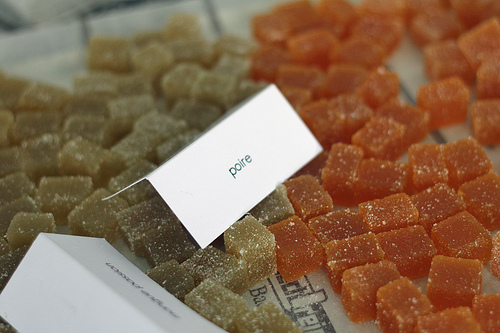 Fresh basil used to infuse a ganache is scrupulously picked through, leaf-by-leaf, when it arrives in the morning produce delivery. I watched as I saw very few limes pass his muster, later to be squeezed and zested for those tartes au citron vert. Most got tossed back at the delivery fellow, who seemed to be used to it. And a flat of raspberries that looked absolutely pristine to me was quickly dispatched away with the driver who glumly agreed to return with some others to try.

But after rifling through the fruits, berries and herbs like an obsessed man on a mission, he’ll stop and break into a big, generous smile, and give a warm embrass to Sophie, a woman who runs the kitchen with him, who has been with him ever since I stood outside his shop with the mirrored door and finally worked up the nerve to knock and go inside over a decade ago. 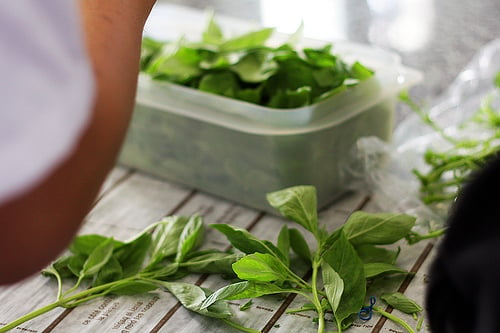 (I once saw her come to work in her everyday clothes and she looked like a million bucks. So anyone who thinks that being around chocolates and confections all day isn’t good for you needs to think about this confident, svelte woman churning out chocolates and caramels all day. And yes, I’ve seen her put a few in her mouth, too.) 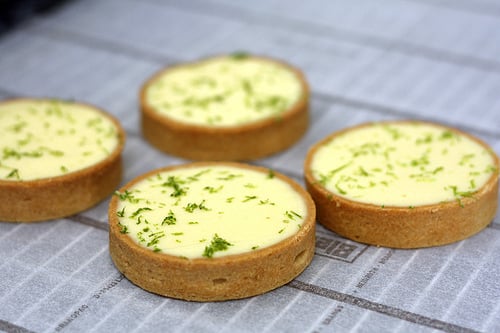 One of the shortfalls in Paris is that there are few places to go and have dessert sur place. The salons de thé (tea salons) are the usual places to go, although they’re mostly in the upscale Left Bank neighborhoods. The desserts are usually fine, but often not extra-special. But here, the pastries are made continuously throughout the day: bittersweet chocolate ganache tarts, galettes puffed up high with baked apple slices, rich coffee cream puffs, and walnut tartlets bathed in warm, buttery caramel.

As soon as they’re done, the individual tartlets and cakes are taken down the stairs six or so at a time, many eaten with a cup of Jacques’ richest-of-rich hot chocolate which he always insists on pouring for me when I come to visit. He once told me that it was impossible for him to start each morning unless he has one himself, first thing after he arrives at work. 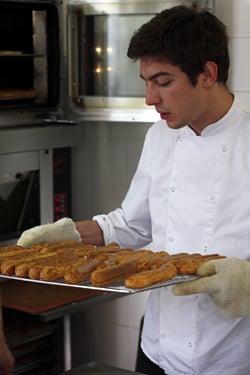 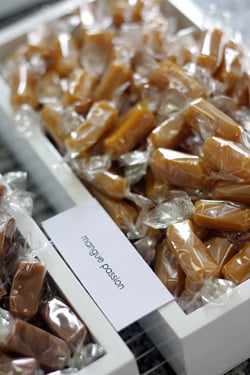 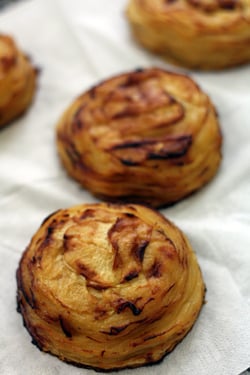 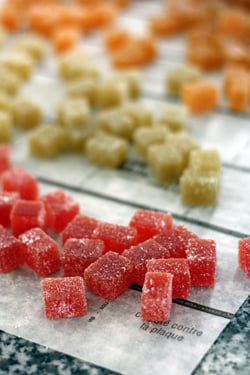 Of all the desserts and pastries in Paris, there isn’t one better than Jacques’ Paris-Brest. And believe me, I’ve tried a lot of them. Named for a bicycle race between Paris and Brest, a city far off to the west of France, the round shape is meant to mimic a bicycle tire. The traditional pastry is pâte à choux (cream puff dough) split horizontally, then filled with rich hazelnut praline cream.

There are a lot of versions in France – almost every bakery makes one – but not one comes even close to the version that Jacques makes. Many can be cloyingly sweet, or soggy. But this one has chunks of toasty hazelnuts embedded in the pastry and the filling is absolutely perfect. It’s just on this side of being too-rich, and although he would cringe if I made this comparison (he likes to give me a hard time about anything, which many of my tour guests have learned when he’s put his hands around my neck and given me a good shake!) the comparison of M & M’s comes to mind, where there’s something about them that just makes you keep reaching back into that bag for more. And more and more.

I never think I can eat a whole Paris-Brest from Jacques, so I get one to share with someone else. Then, after that first forkful, I realize what a mistake I’ve made and wish I had the whole thing to myself because I keep digging my fork in. (They are also served at the nearby Cuisine de Bar, as well as at Les Fines Gueules, while available.) 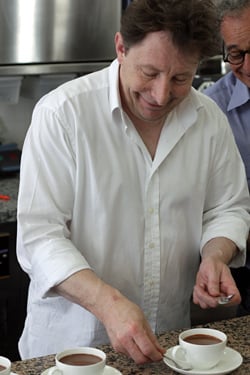 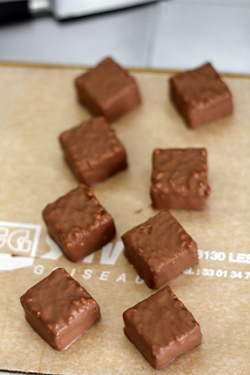 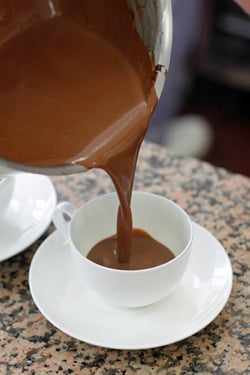 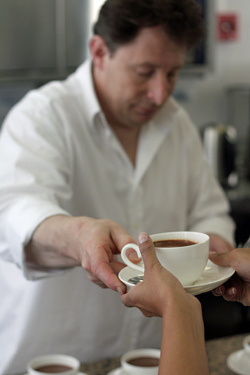 In fact, once I had a tiff with Monsieur Genin (perhaps a normal reaction when someone’s tried to strangle you) and I was dining at one of those places a few days later and had the Paris-Brest, eating it by each better-than-the-previous-one forkful, and as each bite slid down my throat, it melted away any animosity I’d had about walking around Paris with the impression ten fingers of a French chocolatier embedded my neck.

And no one can leave his shop, or Paris, without trying what are probably the best caramels in the world. Each individually wrapped softie is a buttery bomb, some flavored with pecans and others with spices. I do prefer nature (plain), but when I want to treat myself, I’ll try one of the mango-passion fruit caramels, each one having the tangy taste of tropical fruits melded together with caramelized butter twisted up in a sweet seal by the master himself. 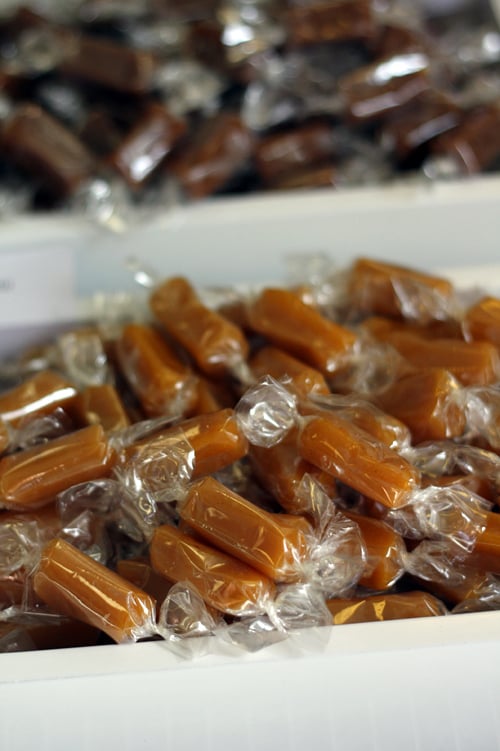 (A second address has opened at 27, rue de Varenne in the 7th, where chocolates, pâtes de fruit and caramels are available.)

UPDATE: As for January 2013, Jacques has suspended making pastries in the shop to concentrate on chocolates and caramels. Some are available in the tea salon but you can order other pastries in advance, such as the Paris-Brest, which are available to go.

My Paris Pastry App and eBook