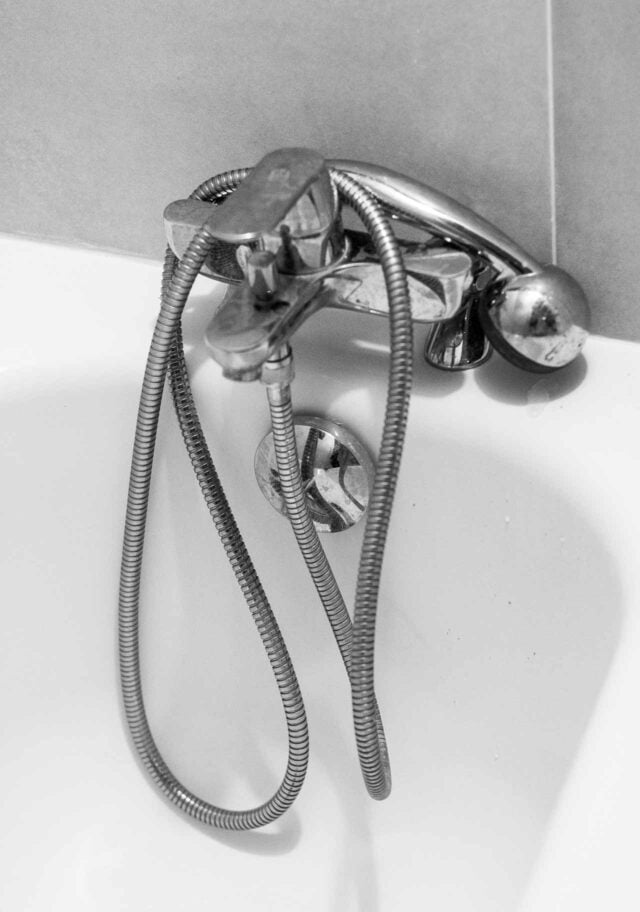 After what seemed like a year, and a rather long one at that, my bathroom and shower have finally been fixed. What seemed like ages ago, I came home from lunch with a friend one day and heard a bubbling, brook-like sound coming from my bedroom. When I walked in, a steady cascade of water was rippling out of the wall and about a centimeter (1/2-inch) of water covered the floor, as well as the floor of my bedroom, courtesy of a broken pipe in the building.

People in Paris are no strangers to fuites d’eau (water leaks) and this wasn’t my first. And unfortunately, it probably won’t be my last. A combination of ancient plumbing, rising rivers, old buildings, disagreements between neighbors, and property managers, who Capital, a French Consumer Reports-style magazine described as having regular “bad buzz” and défiance institutionnalisé (widespread suspicion), keeps Paris awash with water woes.

We spent the last year finagling with plumbers, insurance adjusters, property managers, and neighbors, which is a great way to pass the time, so I apologize to everyone who wanted me to do something over the last year, including several writing projects including a book proposal that’s still in a “pending” file on my laptop, helping a friend with her book proposal, sharing what I’m cooking and baking on my blog, penning my newsletter, nursing a dying laptop, replying to/deflecting social media comments and DMs, wavering about getting off Facebook (like everybody else), and wondering how so many people on Instagram manage to take amazing vacations on beaches in Italy, eating lobster pasta and drinking Spritzs by the sea, while doing my best to carve out a wee bit of time to see Romain. But I had something far more interesting to do, water-wise, so my apologies to all.

Fortunately, the plumber was a good guy, and a bit of a hottie to boot. Still, good looks and an impressive physique only go so far, and it took a Herculean effort to fix a date for him to come. The first attempt was when I was traveling a while back, when there was a leisurely 2- to 3-month window to complete the 24-hour job in my absence, which came and went without a visit from my new dieu.

So last month, when I was out of town for a solid month (about 2165 hours), he was cajoled into coming then, which he did…although it was a squeaker since he came the day before I returned. Romain did much of the footwork on that and fortunately he doesn’t share the same affection for the plumber as I do, unless something happened while I was gone. If it did, I wouldn’t be upset. After all, the plumber came, and as anyone who’s waited for a plumber, all that matters is that he comes.

The plombier had to break the entire shower (and wall) to fix the leak, which he did, and I was happy to step into the new-ish shower after my overnight flight home…until I realized he neglected to put the holder for the pommeau de douche back on the wall. Looking around, I realized there was nowhere to put the nozzle down after I’d watered myself and reached for the savon to soap up.

Like the traversin, the bolster-type pillows that are 10-inches/23cm round, which are way too high for a human to sleep on, no one can quite explain how to use either item. The tubular pillow apparently was designed at a time where people felt that if you slept lying down, you’d die, which reminded me when I learned last summer that l’eau chaude (warm water) is better for reviving wilted lettuce than cold water. Or so I was told.

Enter the traversin, which once allowed one to prop themselves upright the entire evening. Anyone who has tried to sleep on a red-eye flight in coach can probably tell you that it’s impossible to sleep sitting upright, and a pillow that holds your head up as high as if it was resting on a basketball doesn’t help you catch any winks. I’ve been in hotels and guest houses where that’s all that’s been offered and ended up sleeping with my head on a pile of my clothes. (Which made explaining the button indentations marks on my cheeks a little uncomfortable to the owners over the breakfast table in the morning.)

In France, a number of pommeaux de douche (not to be confused with just pommeau, a delicious apple-based French apéritif), are not firmly fixed to the wall, as they are in the States. But are at the end of spiraled hoses, no matter where you lay them while you’re showing,  are showerheads that will slither downward and go rogue in the tub or shower basin. And if you haven’t turned it off, you and possibly the bathroom, are gonna get hosed.

I know the internet reacts badly when people make absolute statements, but I’m going to go out on a limb and come right out and say it: Taking a shower is a two-handed operation (for me).

Some say you’re supposed to turn the water off while you scrub to save water, but we’ve got a Seine’s-worth of water right down the street, so it’s not a major issue to let the water run an extra 14 seconds. Unfortunately no shower I’ve been in has had a reasonable place to lay a showerhead down while you lather up without water spraying everywhere, turning your bathtub (and bathroom) into a mini-Versailles without the dramatic lighting and narration about the life and times of Louis XIV. Even if you put the showerhead face down, like a Water Wiggle, it has a way of turning over and spraying you in the face, and just about everywhere else, far and wide.

This past summer I sprayed a gorgeous bathroom, with beautiful paintings and woodwork on the walls, with a sudden stream of water that came when the hose dragged the showerhead into the full, wet-the-whole-room position. Romain heard me screaming, which definitely wasn’t the same scream of delight when we turned on the Water Wiggle in our backyard when I was a kid.

There’s a reason the good Lord (or whoever decides these things…) invented the shower holder. A few years ago I thought it would be informative to show people how to properly use a French shower. I was visiting a friend’s apartment, who is a sturdy rugby player, and noticed when I went to use his bathroom that he had a bathtub and a shower hose, but no shower nozzle holder, and no shower curtain to contain the water. (I’ve never been able to figure what’s up with that either.)

Always thinking of my readers, I asked how he took a shower without arrosser-ing the entire bathroom and he shrugged and said “Pas de problème, Daveed.” Due to many people asking me over the years how people in France take showers without curtains to contain the water, I suggested making a video of him taking a shower to share with you, but he declined. (Sorry!)

Nowadays, more and more showers are equipped with a fixation or un support to hang the showerhead on so you can keep the hot water flowing (which is especially appreciated in the winter) while lathering up. I don’t know about you, but yes, I need both hands when I’m in there since showering at some point, involves using one hand to lift a few things up and outta the way, so I can clean everywhere.

Having lived here a while, I thought that I could finally master showering without a shower holder. So after finishing my first shower after returning home, and taking subsequent showers in the following days, I’ll admit that I’m useless when faced with a hand-held shower and nowhere to hang it. (Please, no jokes about things that are hanging, or are hung – or not – in my shower.) And I’ll admit that my best days are behind me so don’t expect a video either. But I will tell you that I didn’t do as thorough of a job of cleaning myself as I usually do when I can use both hands to lift, lather, and rinse. So I’ve started working on the plumber to come back to add a support to the wall so I can come out cleaner. If he reads this, he may, admittedly, be reluctant to return, but I promise to make it worth his while, perhaps with a nice, hot, handheld shower (with a holder) afterward. 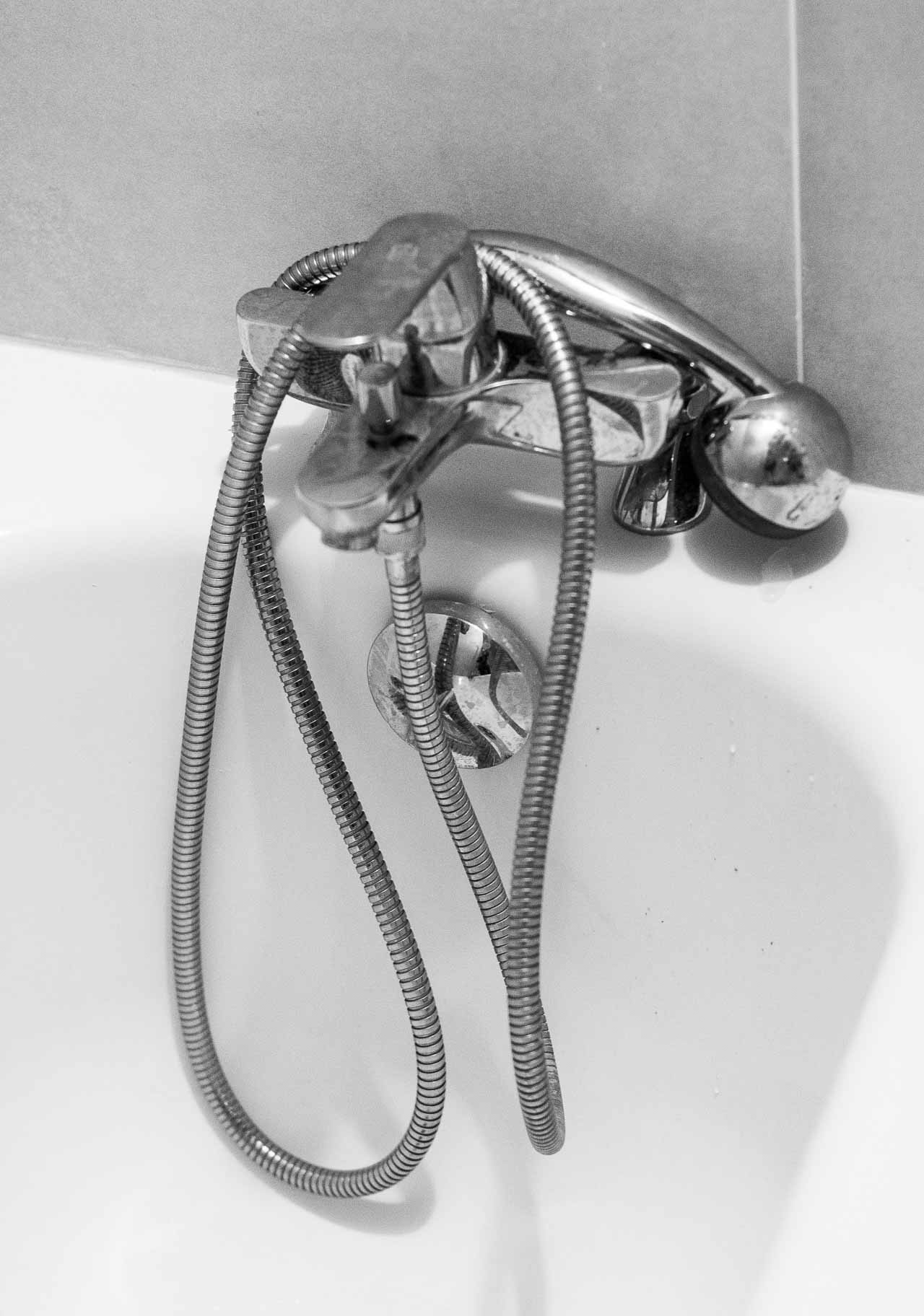