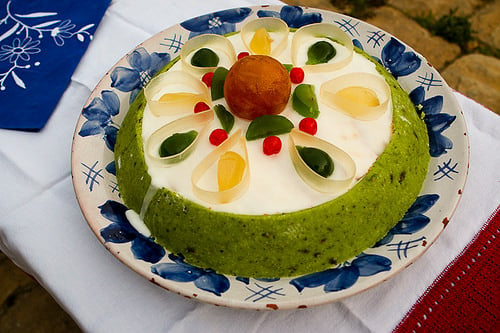 I didn’t want to cause a ruckus by sharing pictures of such a spectacular cake without a recipe. But on the other hand, it’s quite a chore to make a Cassata alla Siciliana and although Fabrizia Lanza sailed through it without breaking a sweat, between using the right pan, mixing up your own almond paste, finding ricotta as good as the ricotta in Sicily, and getting the candied fruit (including the squash, which is the translucent white brick on the platter), it might be classified as one of those things that’s better left to the Sicilians.

(Nevertheless, if you want to give it a go, Saveur printed her Cassata recipe, and it’s also in her book, Coming Home to Sicily. I linked to additional recipes at the end of the post.) 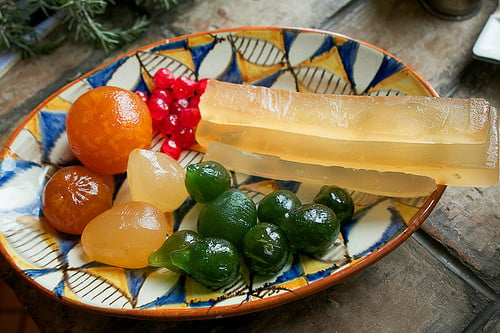 According to Italian food specialist Clifford A. Wright, the word Cassata is derived from the Arabic word quas’at, or qas’at, which refers to a wide bowl. There is actually a special pan to make the cake; it’s a mold with sloped sides and a groove around the bottom so that when Cassata mold is lined with strips of almond paste, and overturned, there’s a rim to create a neat guard against the icing from running down the sides. 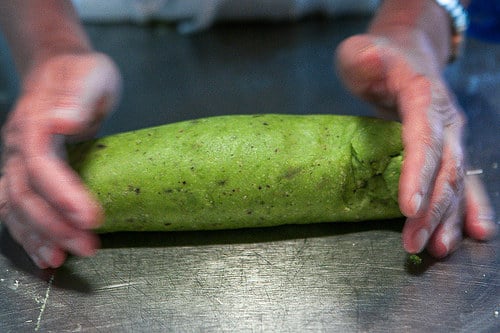 I found out what the pan was for when I was making some pine nut praline for an ice cream I was going to churn up for her, made by caramelizing 1 part sugar then stirring in 1 part lightly toasted pine nuts, which get spread on a flat, greased surface, and left to cool. In my haste to find a flat pan in an unfamiliar kitchen, I grabbed one Fabrizia’s nice Cassata pans, as I was eyeing its flat, wide surface, perfect for spreading the praline. 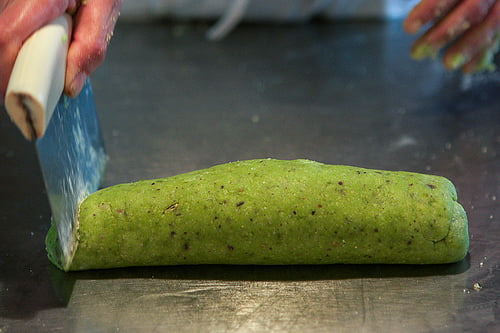 I wasn’t able to find where, globally, you can get one online. But I did find some dynamite metal popsicle molds during my search. 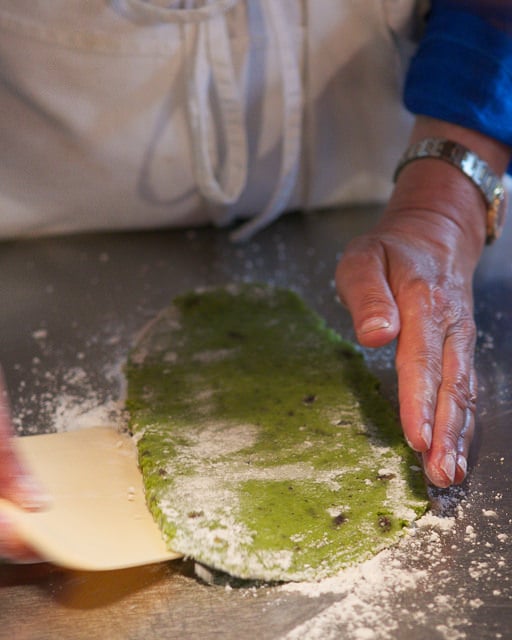 Speaking of kitchen tools, I was wowed by this amazing, single-purpose Italian tool. When I asked Fabrizia where she got it, she replied, “In America.” 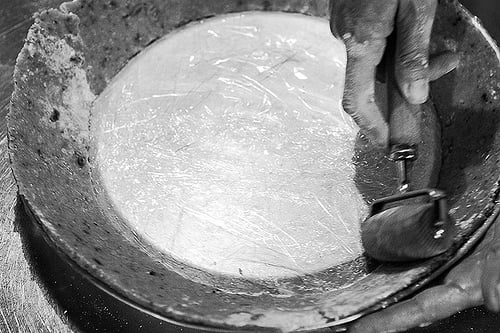 So somehow, people in the U.S. are able to roll the almond paste to fit snugly into the pan, but not actually find the right pan. 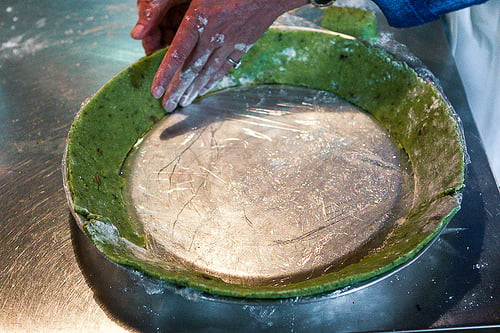 The first thing Fabrizia did was to make her own almond paste using finely ground almonds. Because I am a crunchy-granola California type, I asked if you could make the cake without the green food coloring.

Fabrizia laughed, but being Sicilian, she explained that Cassata is a cake for fun, festive occasions, and the vibrant green is part of the riot of colors that make the cake what it is meant to be. Although, perhaps bowing to overseas sensibilities, her mother, Anna Tasca Lanza said in one of her books that if you leave the green coloring out, you should pour the icing over the entire cake so that it hides the almond paste. 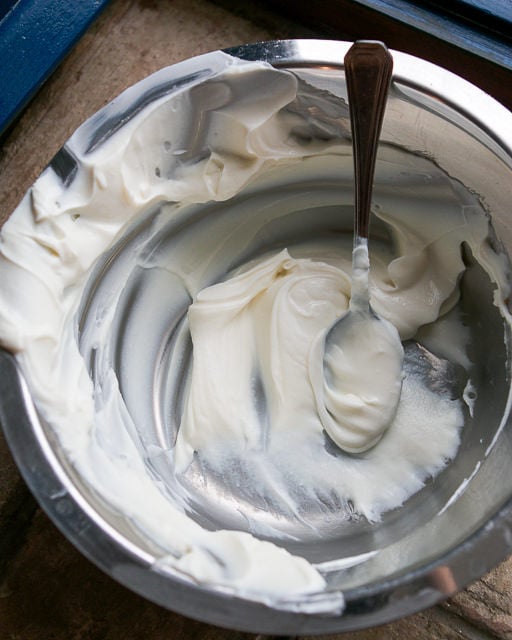 After cutting spongecake into strips to make a top layer for the cake, she whipped up a seriously good ricotta cream with the fresh sheeps’ milk ricotta we’d watched being made just the day before. Since she had a little extra, she tossed the bowl toward me with a spoon, and I dug right in.

Ladies and gentlemen, or signore e signori, no matter how far you are, if you are not booking a ticket to Sicily to taste sweetened sheeps’ milk ricotta cream, may the rest of your life be filled with neutral-colored almond paste. (ie: No fun at all.) 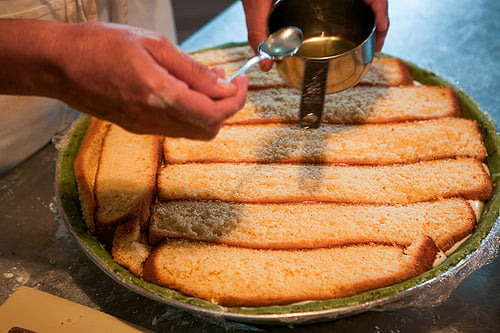 Because she knows that I love bergamots as much as she does, she doused the spongecake with homemade bergamot syrup, which gave me the idea to return in the winter, when the bergamot and citron trees are bearing fruit, and do some serious candying and syrup-making with her. Although I felt kind of bad because when I tasted the bitter-citrus syrup, I initially winced, comparing it to medicine. But then again, a lot of medicine tastes good – but perhaps not in Sicily. (As a kid, I OD’d on way too many orange-flavored aspirin for children…which may explain a number of things happening in my brain as an adult.) 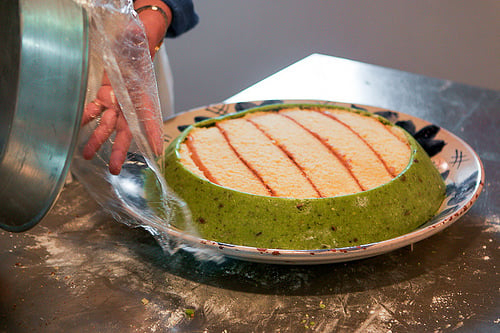 Finally it was time to finish the cake. A batch of icing was quickly mixed up with powdered sugar and a dash of lemon juice, then poured over the top. 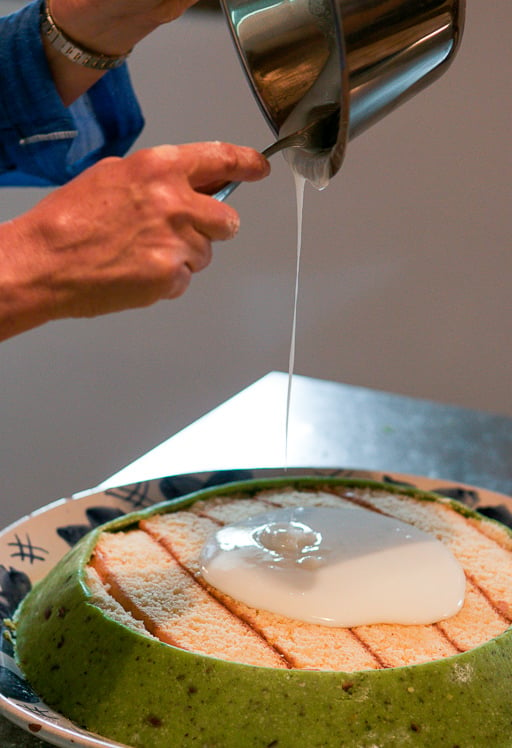 The final flourish was decorating the cake with candied fruits. With a mandoline slicer, Fabrizia shaved off long strips of the candied squash, bending them into teardrop shapes, then arranging them around the top of the cake. 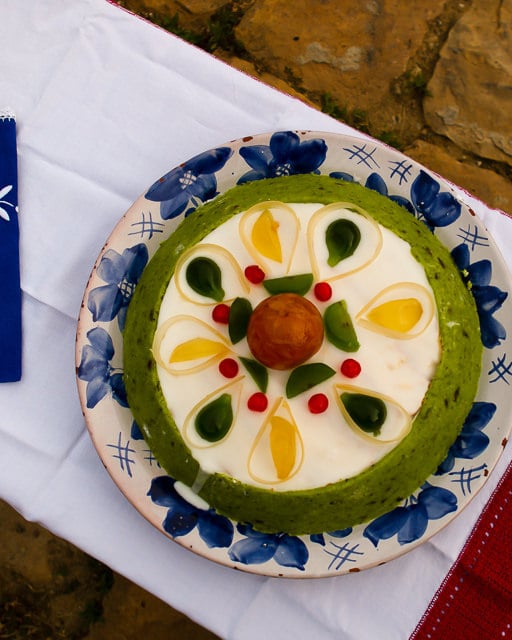 Glazed cherries, candied fig halves, green and yellow candied pears filled in the blanks, and an entire candied orange was placed squarely in the center, to finish it off, and serve.

Cassata: The Sicilian Cake (Background information and history, by Clifford A. Wright)