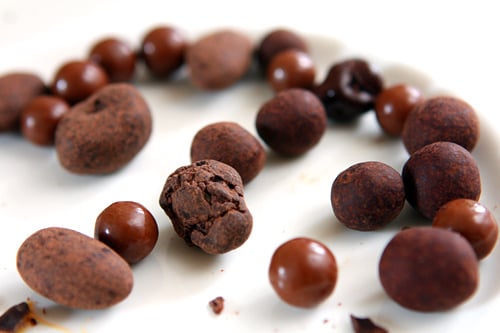 Michael Recchiuti was recently here in Paris for a few weeks, visiting, and eating his way around town. Because he’s a chocolatier (from San Francisco), of course, he concentrated on chocolate. Interestingly I couldn’t remember how we met, but he recalled the event pretty well.

Apparently a group of us had been invited to Robert Steinberg’s kitchen, since he was working on developing ScharffenBerger chocolate. Along with me and Michael, Harold McGee was there, as well as a few other local pastry types. Although I vaguely remember this (so I reserve the right to dispute it at a later date), Michael said that I arrived for the chocolate tasting and discussion with a bag filled with my very own plastic containers and proceeded to unload and open them, each containing a recipe I was working on for my chocolate book, asking the various pastry chefs and food professionals sitting around the table for their opinions.

He described it as pretty “bold” – taking over the tasting – but we had a good chuckle about it now. And it reminded me of one of the nicest things about having a wide, friendly circle of people like Michael in my life; it’s nice to know people who are really experts at what they do, but who are still just a down-to-earth folks, like Michael, who understand serious techniques and has loads of talent and combines them to create chocolates and confections infused by playful humor and great flavors. And to remind you of all the embarrassing things you’ve done in your past, too. 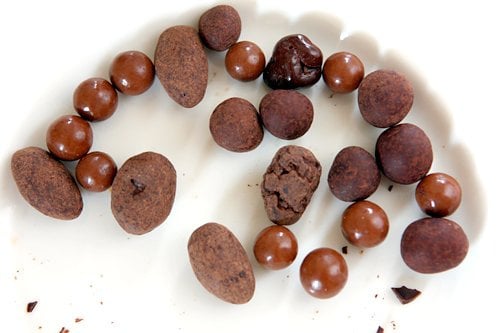 His Asphalt Jungle Mix is a good example of that. It was part of a care-package he handed to me with some of their new products since they’re not available in Paris (although that’s something I’d like to work on) and I wasn’t sure what to expect when I opened the box. Michael is now the proud owner of a panner; a machine with a turning and tumbling drum (like a washing machine) that allows a chocolatier to make round, chocolate-coated candies.

This “riot” of flavors, as he describes it, mixes up burnt caramel-coated nuts, cherries “two ways” and best of all, peanut butter pearls, tiny little beads filled with creamy peanut butter, which he told me get dozens of distinct coatings of chocolate and they go round and round in the giant tumbling drum. I first kept picking out the peanut butter ones first, like a kid rifling through a cereal box looking for prizes, then I finally dumped the whole box out on a white plate which led me to go on the attack, devouring them all—without discrimination.