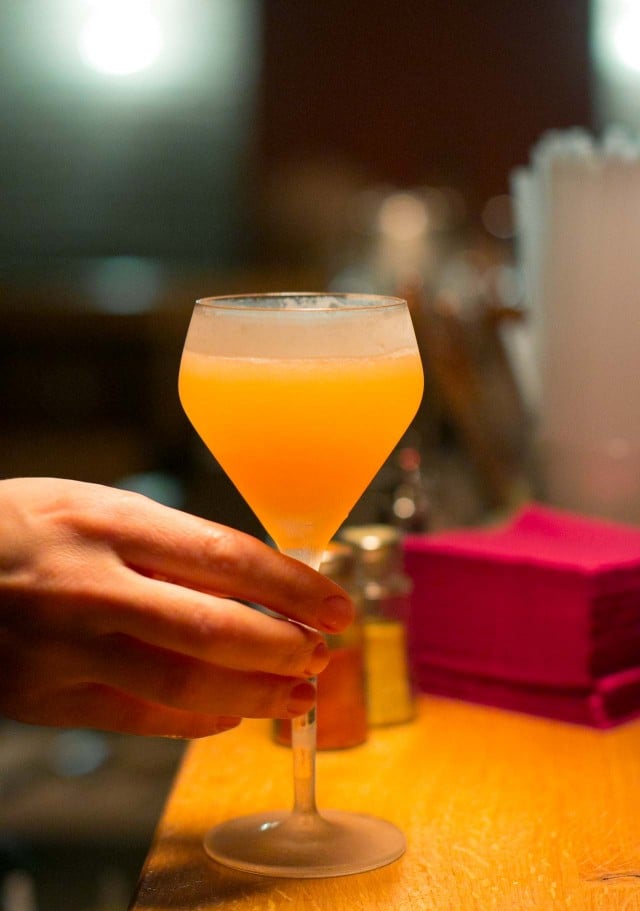 [UPDATE: Pasdeloup has closed, and new owners opened it at Goguette. The chef and bartender mentioned in this article are no longer at the restaurant.]

It wasn’t until recently that I became very in awe of bartenders. I used to just go in and order a beer when I was younger, not really aware that these people are the pastry chefs of the beverage world. Now that I’m older, and wiser, I realize what a specialized skill these bartenders possess. I’ve become a little obsessed watching a good bartender work while perched at the bar facing them, checking out the deft, swift, sure movements of their hands as they measure, mix, shake, and strain. 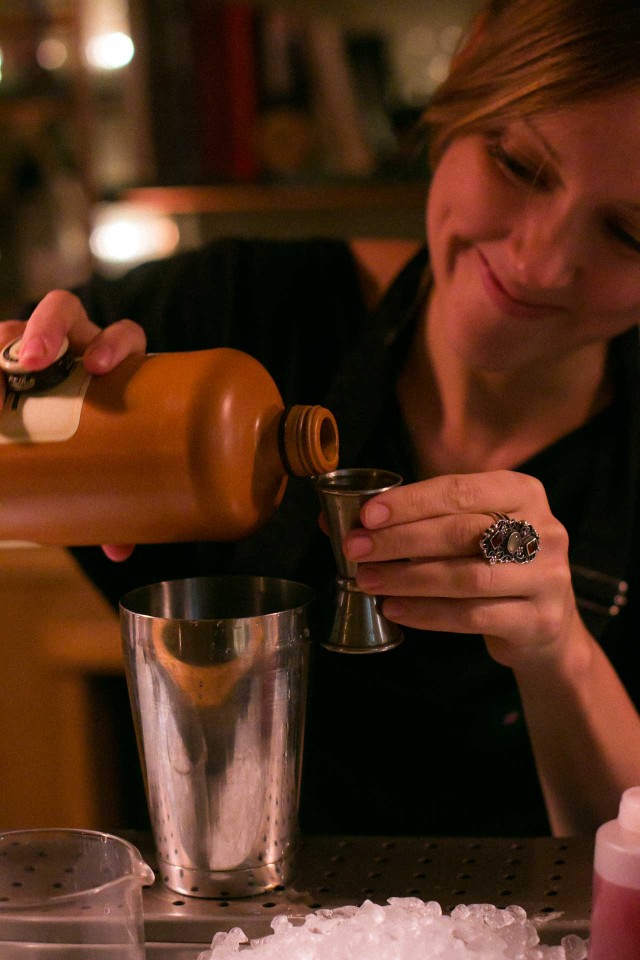 I’d met Amanda Boucher at a mescal tasting in Paris, and at the time, she was the head bartender/manager at Candelaria. Watching her work, I could see her sure hands work their magic, hovering over a cocktail pitcher or glass, inventing some libation that was the result of her thinking swiftly, sizing up what a customer was interested in – like a good bartender should do – and mixing up the right proportions in a glass before handing it over. The final result being the perfect balance of all the ingredients added to the drink, so one isn’t stronger than the other, but they all come together in the glass and are just right. 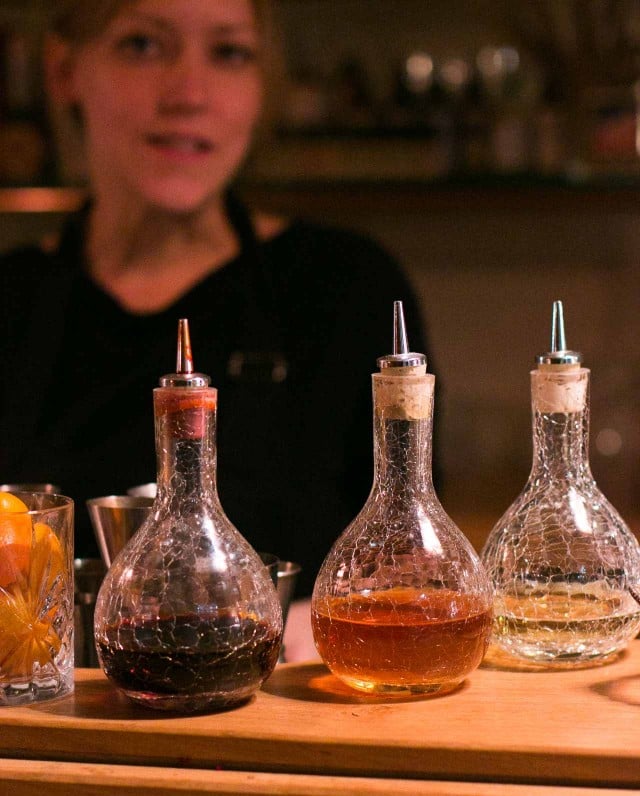 Amanda is now the head of Pasdeloup and will soon be the owner. Cocktail bars have blossomed in Paris over the last several years and it’s become a great city for cocktails. Amanda moved to Paris nine years ago to study art history. A few years into her studies, she walked into the Experimental Cocktail Club and fell in love with the craft. She told me she had spent her entire adult life in Paris, and spent the last five years of it learning to bartend, behind the bar. 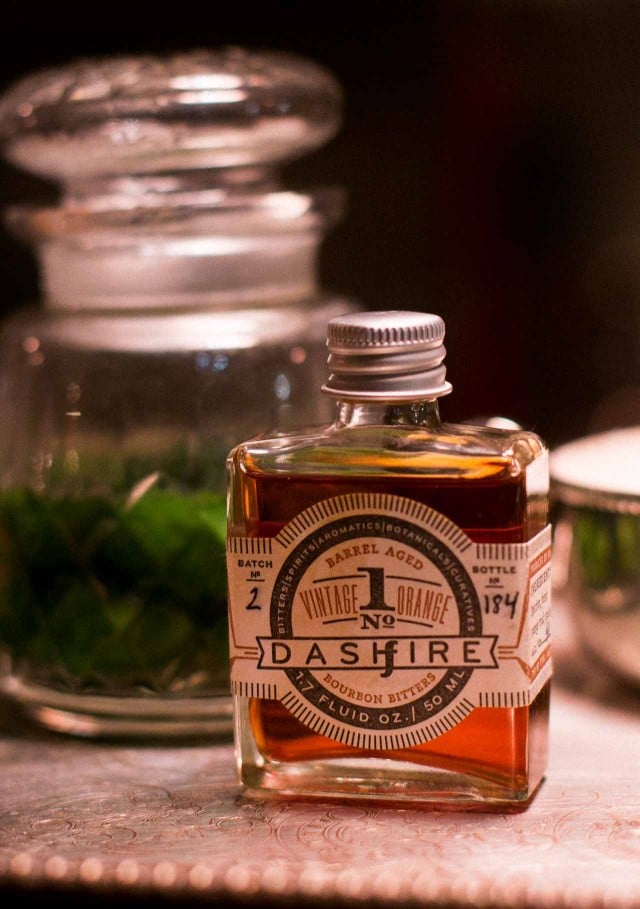 When I asked her how she learned so quickly, she replied, “I worked in some very, very busy bars.” (Oh, to be 29 again…) Sure enough, Amanda’s swift hands and movements are a pleasure to watch and she’s one of those bartenders that I would completely trust with my drink order, letting her fix whatever she’d like.

I’d gone with my friend Jennifer a few weeks ago and had a superb cocktail made with scotch that was tourbé, a word I had never heard and I thought was somehow “spun” (because a tourbillon is a vortex.) But found out it meant “peaty.” (So now you can use that French word in your next conversation and wow your amis, or closest French bartender.) 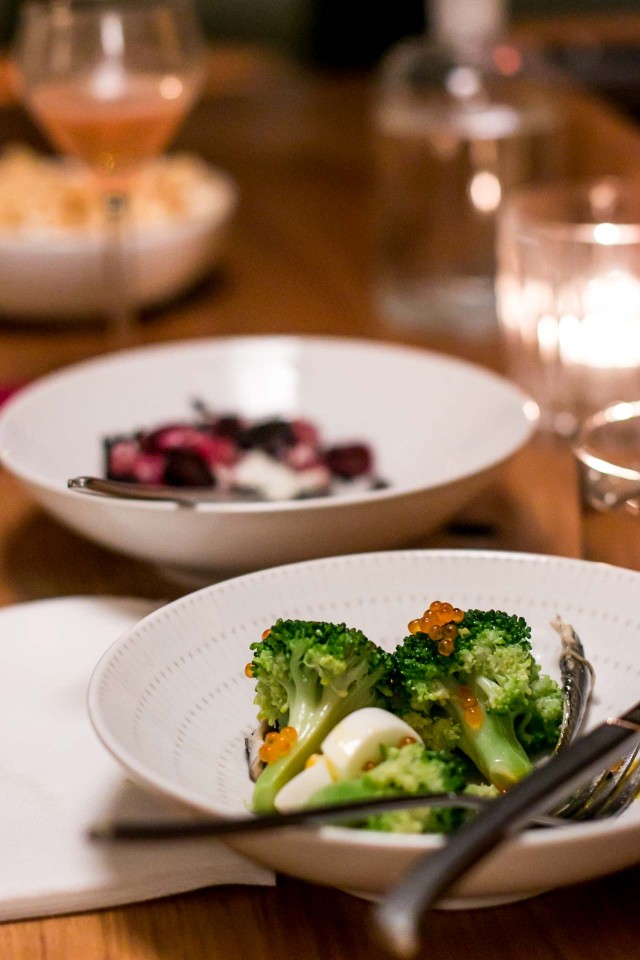 When I went back a few weeks later, Amanda had changed the cocktail menu, and gave me a taste of something she had been working on: A homemade brown butter syrup. One tiny sip of this syrupy elixir had me smacking my lips, savoring the gentle maple-like flavor, which she plans to use in her Old Fashioned cocktails. 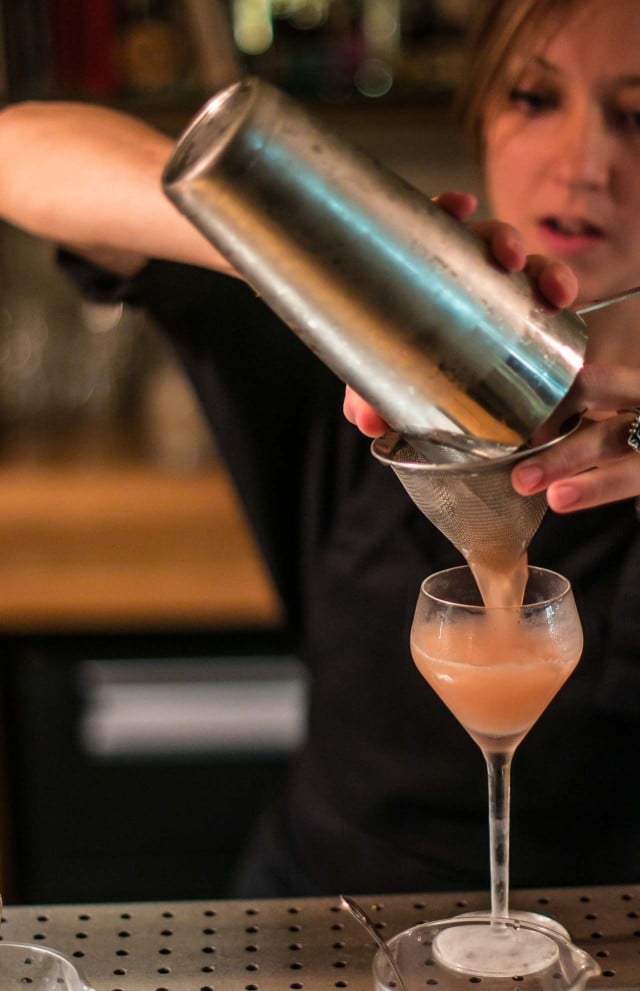 In spite of my love of butter, Amanda and I agreed that we both tend to prefer non-sweet cocktails. Although she uses them in some drinks, said she’s not a huge fan of bitters because she feels that they can easily overwhelm a drink. Instead, she uses syrups and sharp/bitter liqueurs like Cynar, Chartreuse and absinthe, to add nuances. The Bloody Celerí, shown below, was a good example. It’s a riff on the Bloody Mary, but without a drop of tomato juice. 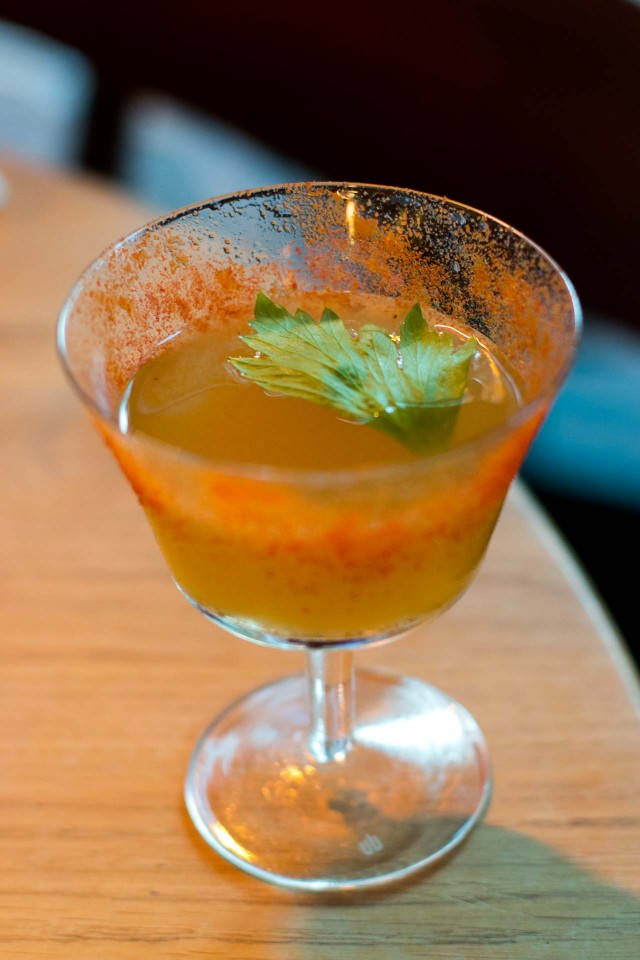 The spicy beverage is made with celery leaves, aquavit, juniper, and served in a glass is dusted with dehydrated tomato. I loved it, although the menu warns to the more intrepid that it’s épicé & iodé – spicy, with iodine notes. 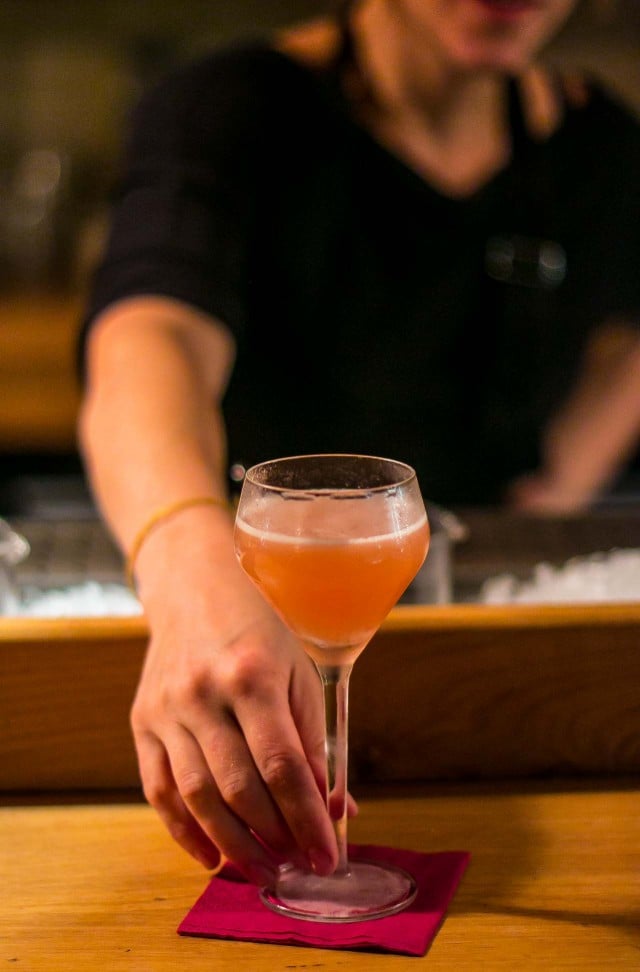 Another fun riff she does is a PB&J Sour. Of course, peanut butter & jelly is a uniquely American duo (and Europeans don’t usually share our love of peanut butter), but with Monkey Shoulder scotch infused with peanut oil (housemade), a gelée de raisin maison (homemade muscat grape jelly), lemon, and a touch of salt, I found this curious drink a delicious accompaniment to the popcorn made with another French term I learned – levure maltée, or nutritional yeast, a flavor from my past, but still tastes good and paired well with the touch of sesame oil and togorashi (hot Japanese pepper) added to the maïs soufflé. 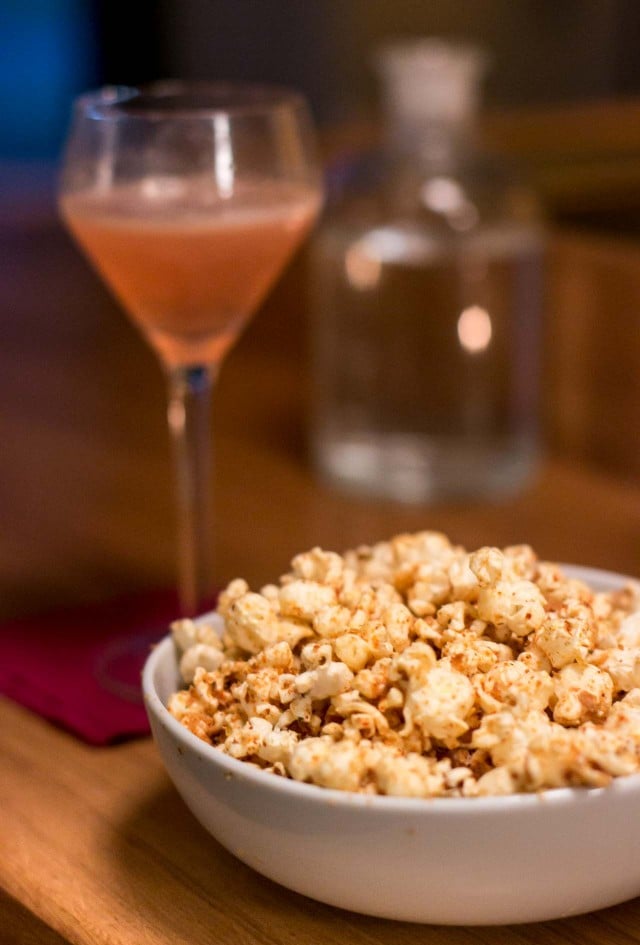 The popcorn was from the menu a picorer, things to pick – or snack – on. They came out of the kitchen presided over by the talented Lina Caschetto. Lina worked in some intense French kitchens before taking over at Pasdeloup, and I felt bad the first time I went because my friend and I, who’d gone there for cocktails the first time, left in search of something more substantial than bar snacks for dinner. 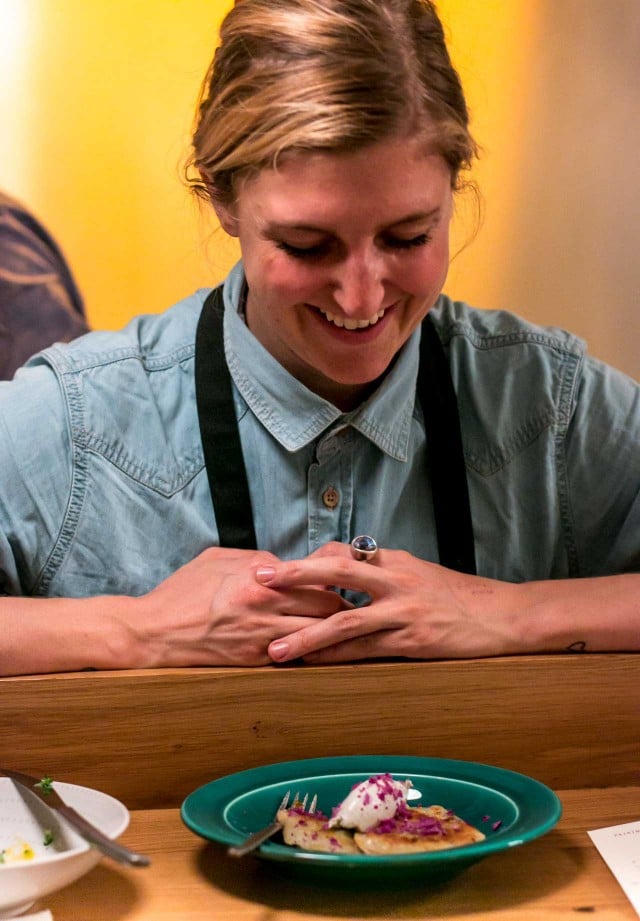 We had split a lovely plate of chicken liver mousse-topped crackers with Reine Claude plum jelly and pickled plums, but this time, I took a closer look at the menu and saw full-on plates of food on offer. And from the looks of the beautiful dishes coming out of the kitchen, I decided to stay and eat.

Although it’d be easy to think of this as “bar food,” I found it substantial enough to make a full meal out of, especially a good idea if you’ve had a few cocktails. (And if you aren’t a cocktail person, there is a nice, well-edited, and reasonable, selection of wines by the glass, and a few beers to boot.)

I took my cocktail to the kitchen counter and chatted with Lina, as she let me taste a beef tartare (€12) with Roquefort cream, shallots, pickled raisins and crisp, cloud ear mushrooms. It was excellent, served in a well-chilled bowl, although my photos in the dim bar light didn’t really do it justice. But wow, was that good. 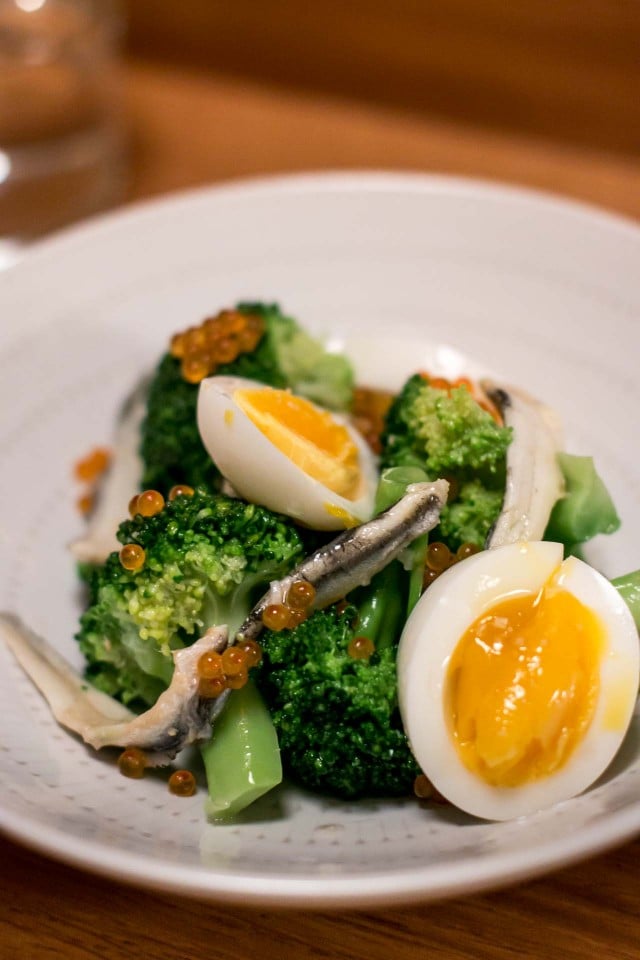 Unusual for a bar (or a restaurant) in Paris, another dish featured a copious amount of fresh vegetables: Salade de brocolis – Broccoli salad with big florets of lightly blanched broccoli paired with soft-cooked eggs, anchovies, trout eggs, and garlic. It was terrific but was a bit hard to eat gracefully, so my suggestion is that they slice the broccoli first…or you can just have an extra cocktail and don’t worry about how you look trying to eat it : ) 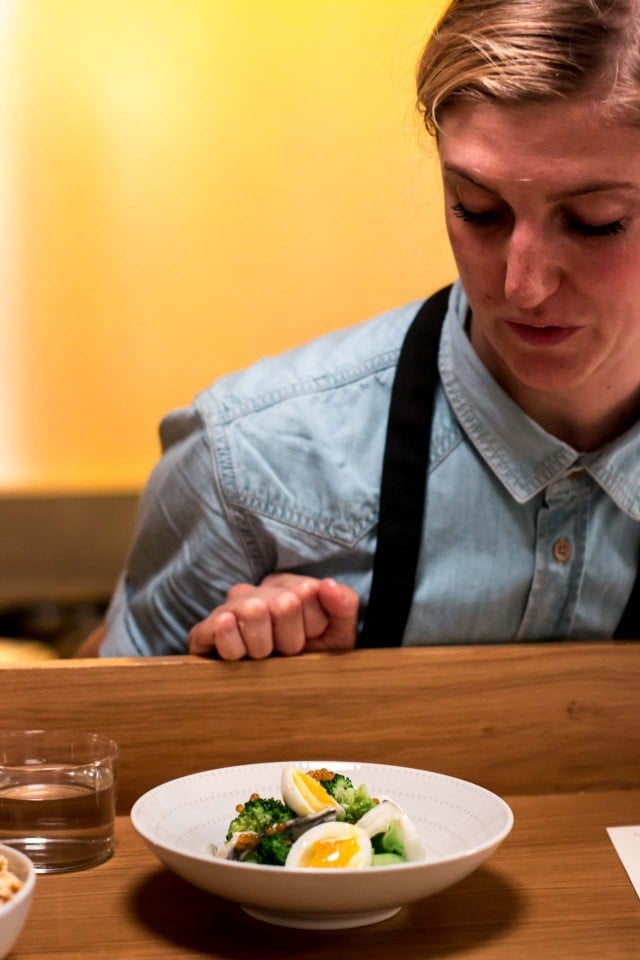 The best thing, though, was the most surprising. A plate of cauliflower pierogis came out looking relatively unassuming. But after my first bite, I stopped mid-fork: They had exactly the flavor that I remember from going to the Ukranian places in New York when I was younger, where fried dumplings were served with sour cream and beets, often to the after-hours crowd. Filled with cauliflower, cheddar, scallions, and topped with mascarpone with dried, shaved purple cauliflower, they were truly outstanding. That, and a couple of cocktails, is my idea of a perfect meal. 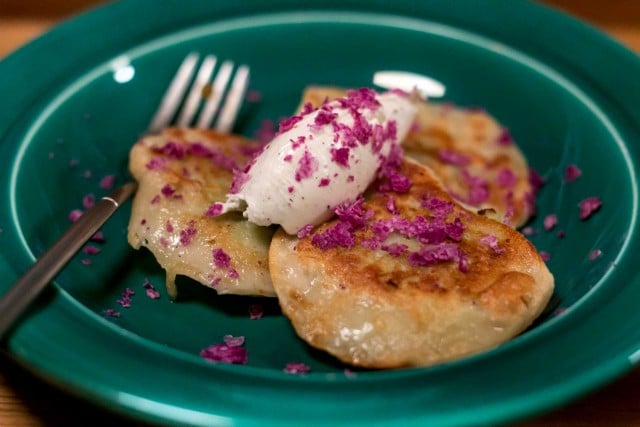 Most of the cocktails are €12 and currently the menu plates range between €7 and €13 (popcorn is €3), which to me, is a bargain for such well-made food and drinks. Tasting plates of cheese and charcuterie are available as well. Although Pasdeoup has only been open for a year, it had clearly hit its stride.

While it doesn’t resemble a traditional eating establishment, it’s a timely hybrid between a bar and a restaurant, offering the best of both. For those who want good cocktails and something to eat, but not necessarily a full-on meal, you’d be hard-pressed to find a better address in Paris.