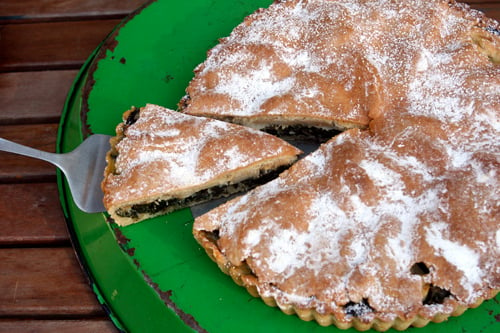 When I was in Nice a few months ago with my friends Adam and Matt, I wanted to show them some of the more unusual local specialties, ones you wouldn’t come across unless you were actually in a certain region. French cooking is very regional, which is why you won’t find bouillabaisse in Paris or all that many macarons in Nice. And a lot of people visiting a certain town or city might not be familiar with some of the more unusual things that are only available there, like Socca or Panisses, simply because no one would think about eating them outside of the area where they originated. 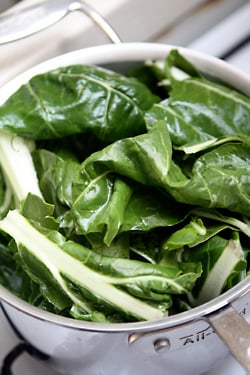 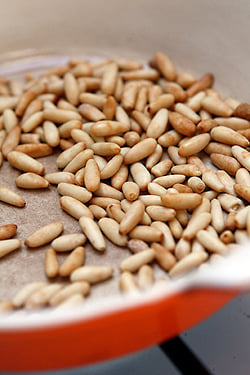 In case you’re wondering, you can’t make a Tourte de blettes without Swiss chard (blettes). For one thing, if you did, then it wouldn’t be Swiss chard tart. So get that notion out of your head right now. And believe me, if you can’t find chard, I feel your pain. One fine morning at the market, I bought my big, beautiful bunch of chard from a big pile at the market to make this tart.

Then after cooking it down, I deduced that I needed more, a revelation which came after the market had packed up for the day. Well, I kid you not..I searched through eight supermarkets and three specialty produce stores in my neighborhood looking for Swiss chard (and one frozen food shop as well), and didn’t find a single leaf. One vendor tried to convince me that bok choy was “Italian” Swiss chard—but I wasn’t buying it.

So the next morning, I trudged up to another market not in my neighborhood, near rue Oberkampf, and found it. I don’t know what the moral of the story is, and although I’ve seen similar sweet tarts in Italy made with a variety stewed greens, called Torta di Verdura, I wanted to stick with the classic. And I don’t think that they make tarts with bok choy in Italy. 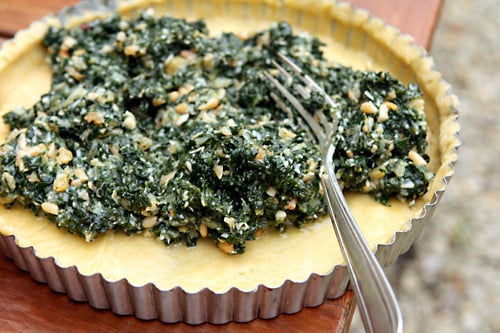 The Swiss chard I got was so big, I had to clean it in the bathtub (not to worry, I cleaned it to surgical standards before I gave it a wash). And speaking of big, I had these enormous shards of cinnamon that my friend Diane gave me a while back that I was waiting to use, and the spiciness of this Vietnamese cinnamon was so alluring when I grated it that now that I’ve used it, I’m wondering what the heck took me so long to finally grate it up? 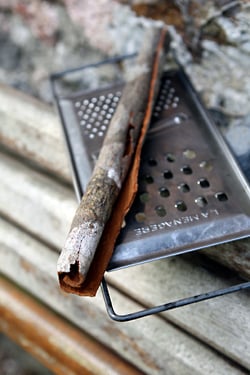 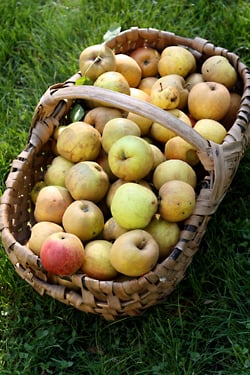 You probably don’t need me to tell you that this tart isn’t for everyone. (If you’re one of those people, thanks for reading at least this far.) It’s not super-sweet and has a bit of Parmesan cheese in it, plus the dough made with olive oil instead of butter. But it sounds odder than it tastes, and folks make sweet desserts with vegetables all the time, such as Carrot Cake and Sweet Potato Pie, so it’s really not that much of a stretch, my friends.

I’ve seen Tourtes de blettes with apples tucked in there, and sometimes not. I used them in this one because I was apple picking this weekend and had an overabundance—to say the least, of apples to use up. (Why couldn’t I go Swiss chard-picking?) Although the two apples I used hardly put a dent in my basketload. 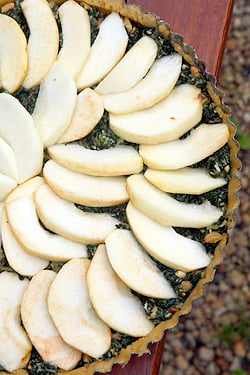 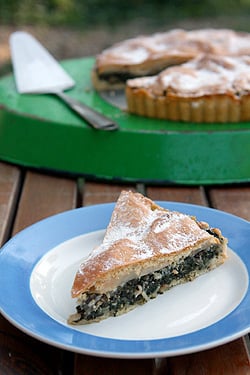 The tree I climbed to get these apples wasn’t marked anywhere telling me what kind of apples they were. But these were apples that were more croquant (crisp) than traditional baking apples, the kind that get squishy soft when you cook them. (But hey, they were free. So I wasn’t complaining.) But I recommend that you use apples that will cook until they’re nice and soft if you can.

The dough can be a bit tricky to roll, so I roll it between two sheets of parchment paper. It won’t look like a museum piece when it’s transferred into the pan, but you can use your hand to press it into place. And no one is going to see the bottom, except for real sticklers, but who wants to feed those kinds of people anyways? 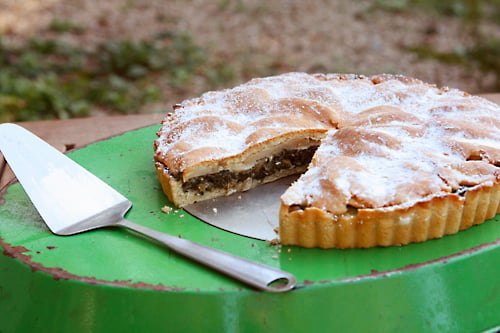 Because I learned that all Swiss chard is not created equal, I gave a weight equivalent for the leaves. Whenever I have leftover chard stems, I sauté them in olive oil and salt, until wilted, then freeze them to add to my next batch of Soupe au pistou. Any extra leaves can be added to that as well. I used unrefined cane sugar for the filling, since I like the slightly caramelized taste it adds, but you can use regular sugar if you wish. If you don’t have a tart pan, a springform cake pan will do.

Note: I made this dough originally using American flour and found it came together fine without the milk. But when I made it with French flour, which is softer and milled finer, it needed a bit of milk to bring it together. A few commenters also noted that the same, so you may need to add a few tablespoons of milk to the dough if it appears dry and isn’t coming together.

Apples: A Guide to Selection and Use (Ohio State University Extension)