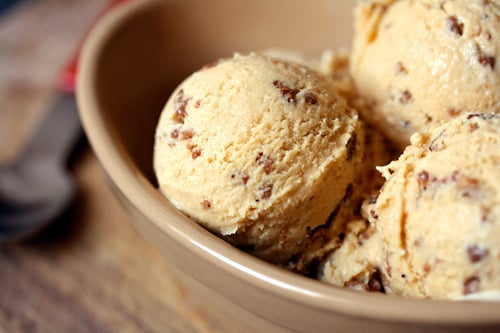 When I was in Ireland, after a wonderful dinner at an old country inn, I was served a big bowl of Brown Bread Ice Cream. I had heard about this unusual ice cream quite a while back and like Grape-Nuts Ice Cream, which is something apparently enjoyed in New England (although I was born and live there for eighteen years and never saw or tasted even a lick of it), I was intrigued by the idea of bits of dark crunchies embedded in scoops of cool, creamy ice cream.

One bite, of course, and I was hooked and wanted to make it when I got home. I wasn’t quite sure how to go about it, and I sent a message to the inn inquiring about the process, but after a few weeks of checking my Inbox every three minutes, I just couldn’t wait any longer and decided to come up with one on my own.

Fortunately, around the same time, a copy of Tartine Bread landed in my mailbox from the publisher, and I was completely blown away at what a beautiful book it was. 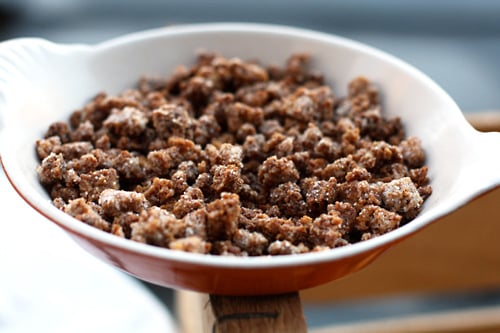 I’m not a bread baker, although I appreciated the gorgeous photos of the rustic breads, but I was especially fixated on the recipes in the book for using bread, leftover or otherwise. One of my problems is that I often read cookbooks when I’m having dinner by myself and one thing leads to another—and in the best case scenario, I bookmark the recipe to make later. In the worst case, if I have the ingredients on hand, I leave my dinner to get cold and jump up into the kitchen to make the recipe. And it just so happened that I had a half a loaf of brown bread leftover. Imagine that!

If you’ve not been to Tartine in San Francisco, it’s a hotspot on a corner on the edge of the Mission district and is always jam-packed. A long time ago, a local restaurant owner on the street confided to me that the space, which at the time was an old-fashioned bakery, was going up for sale and that I should buy it and open up a bakery myself.

I considered it, but was having coffee with two friends that already owned bakeries in San Francisco and they both looked at me, then looked at each other, and said, “Why don’t you just take over ours for a few weeks?” They followed that with a knowing cackle between them which erupted into peals of laughter. 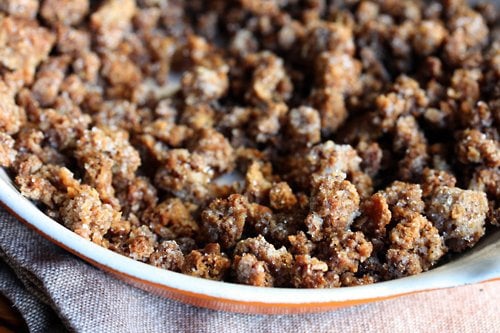 So I never did open my bakery in San Francisco, but Chad Robertson and his wife Elisabeth Pruitt have been a huge success and to be honest, the idea of waking up very early in the morning for the rest of my life wasn’t so appealing. So it all worked out for the best for everyone.

(Although Chad and Elisabeth might have something to say about that…) 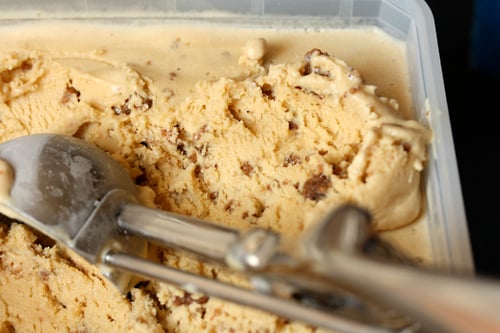 If you don’t have any brown bread, any hearty whole-grain bread will do nicely. In the book, Chad uses basic country-style bread. I also give the option to use some brown sugar in the custard since I like the caramelized flavor it lends. But feel free to use all regular sugar. I have to say, I was considering cutting back on the sweetness a bit in the recipe for the crumbs but as I stirred up the bread bits with a smaller amount of sugar, I tasted as I went and kept adding more until I’d realized I added the recommended dosage, which was just perfect.

Brown bread crumb recipe adapted from Tartine Bread by Chad Robertson If you don’t have brown bread, you can use a hearty, whole grain bread that is somewhat crumbly. Even day-old bran muffins or gingerbread would be nice, especially if you plan to serve this ice cream around the holidays. You’ll probably end up using about 2/3rds of the brown bread pieces, but if you’re anything like me, you can snack on the rest, or sprinkle them on top just before serving. Maybe with some chocolate sauce.

For the caramelized brown bread crumbs:

For the ice cream custard: