One of the compelling things about food blogs is how they bring together people from all over the world. Cooking and eating is something we all have in common, no matter where we are from. Blogs have globalized cooking, erasing borders and boundaries. And I’ve enjoyed learning more about other people’s food and cooking, and meeting them as well.

Things have changed over the past few years, but a little over a decade ago, “link rolls” listed maybe a half-dozen blogs, and people would excitedly add new ones as they learned about them. One that stood out was Cafe Fernando, written by Cenk Sonmëzsoy. He started like most of us – sharing what he was eating and cooking, but eventually became known for his gorgeous photography, too. 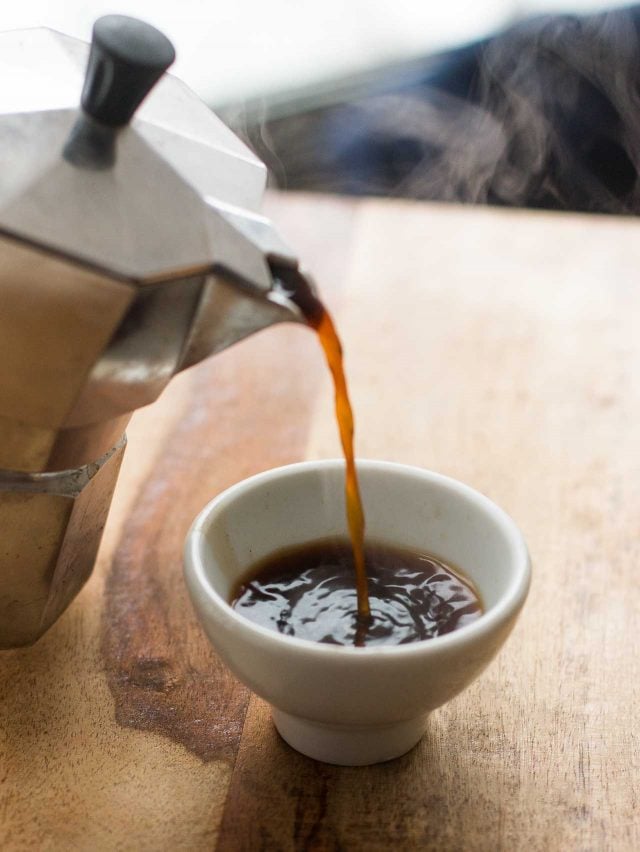 I, and other readers of Cafe Fernando, weren’t the only ones who noticed him. Cenk got a publishing deal and spent six years working on his book, which was in Turkish. I was at a dinner party recently with some Turkish people who had non-Turkish spouses, and both sides agreed that Turkish is one of the most difficult languages to learn.

When I saw his book, I didn’t need to know any Turkish (although I can say, “Thank you,” “Goodbye,” and “hazelnut” in Turkish) — the book was so unique and beautiful that I didn’t need to understand any of words. Although I was hoping one day to be able to make the Hazelnut (Findik) & Caramel Cookies, which were speaking my language. 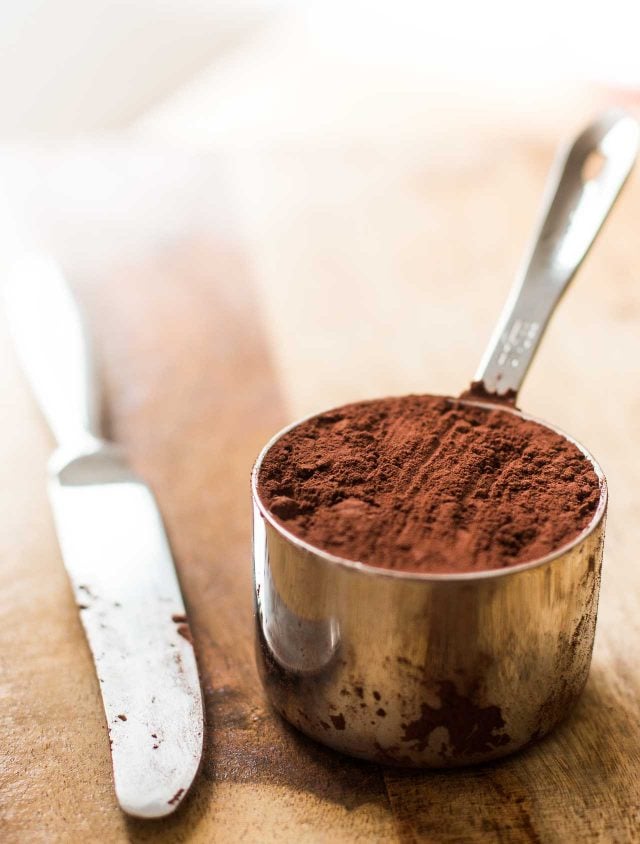 The book was recently released in English. Cenk translated the book himself, rather than rely on a translator, so more of us can not only appreciate the pictures, but the stories and recipes. The release of the book also gave me the opportunity to have a reason to spring for this bundt pan, which I’d been admiring for years. I finally sprung for it. 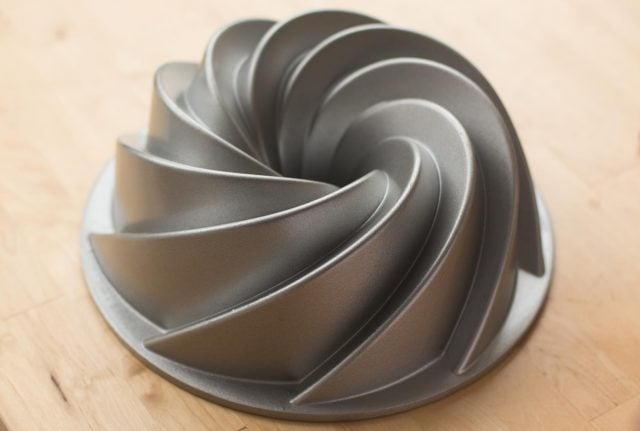 I don’t really like fussy cakes and shapes, and this one was bold and modern, perfect for a double-chocolate dessert. 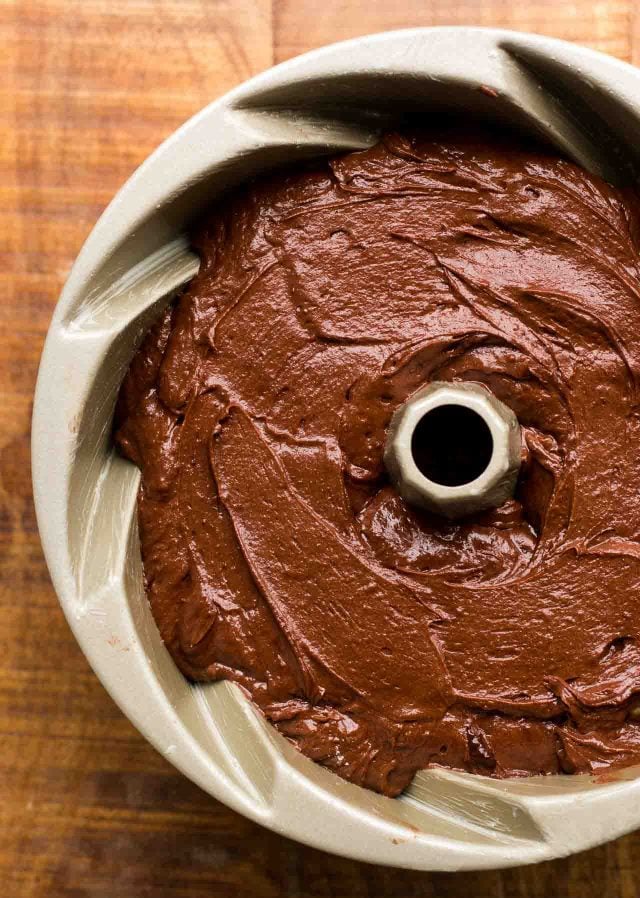 When I showed it off online, wondering if the cake would come out after an OCD bout of buttering it, several people suggested using cooking sprays, which I didn’t go with since the manufacturer suggests they’ll ruin the finish over time. (And it voids the warranty.) Others mentioned the “paste” that had gone around the internet, a mixture of 1/2 cup each of flour, oil, and vegetable shortening mixed together and brushed on. 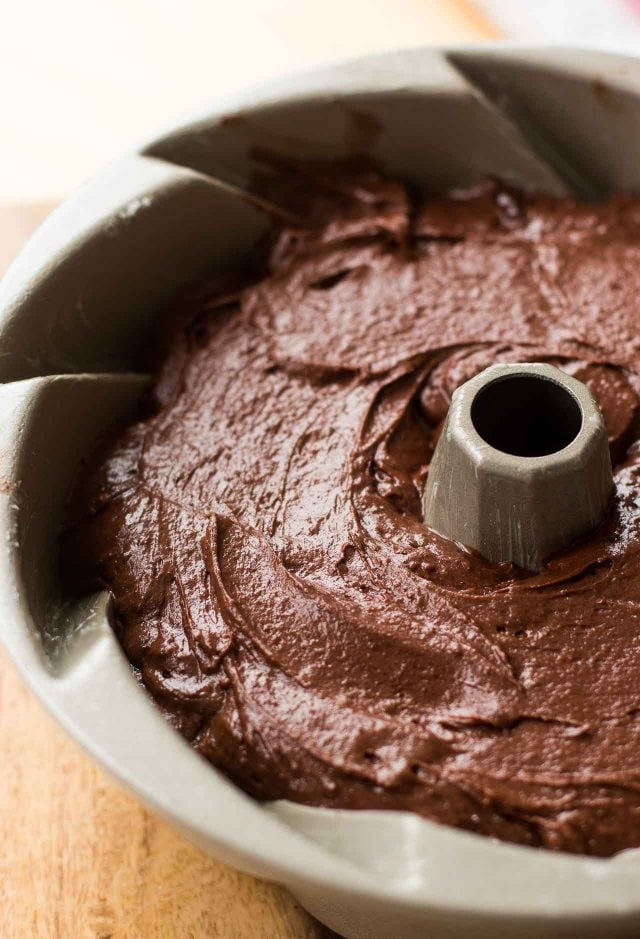 I’ve didn’t use it, not only because there’s no vegetable shortening in France, but it invites the inevitable question even in the U.S.: What can I use in place of the shortening? And I don’t know. Marion Cunningham told me she brought a tin of it to Paris when asked to come and make pies at the Ritz Hotel. According to her, the chef picked up the can, took a look at it, and said, “What is this sh*t?”

Others, even in America, don’t like to use shortening for a variety of reasons. (Although there is all-natural vegetable shortening.) I don’t get all worked up about it, it but I prefer to stick with butter. 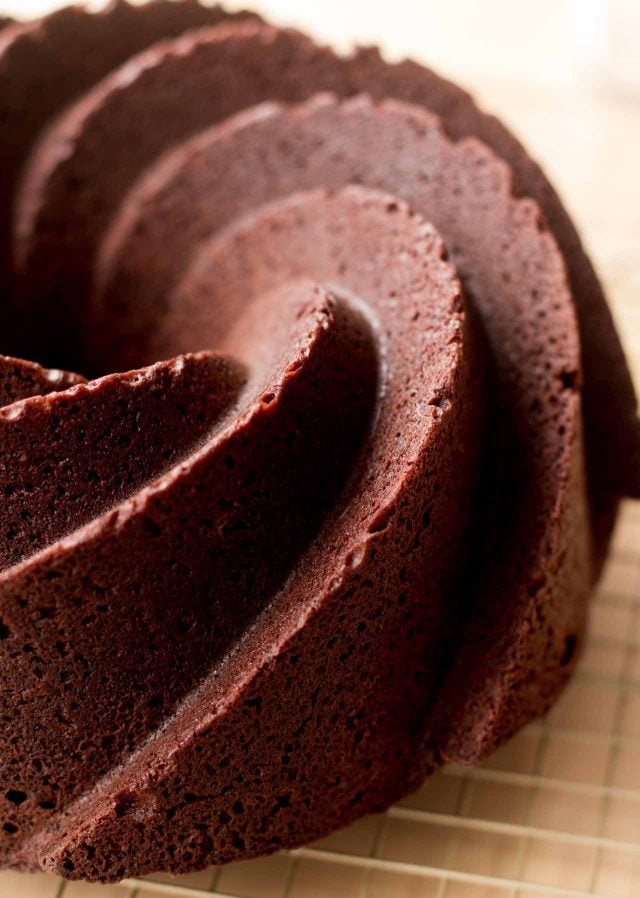 The one issue I had with the pan when I unmolded the cake was there were air bubbles in the creases with created some rough edges. I got out my magnifying glass and looked at pictures of cakes made in this pan elsewhere and didn’t see any holes, or rough edges, like mine had. 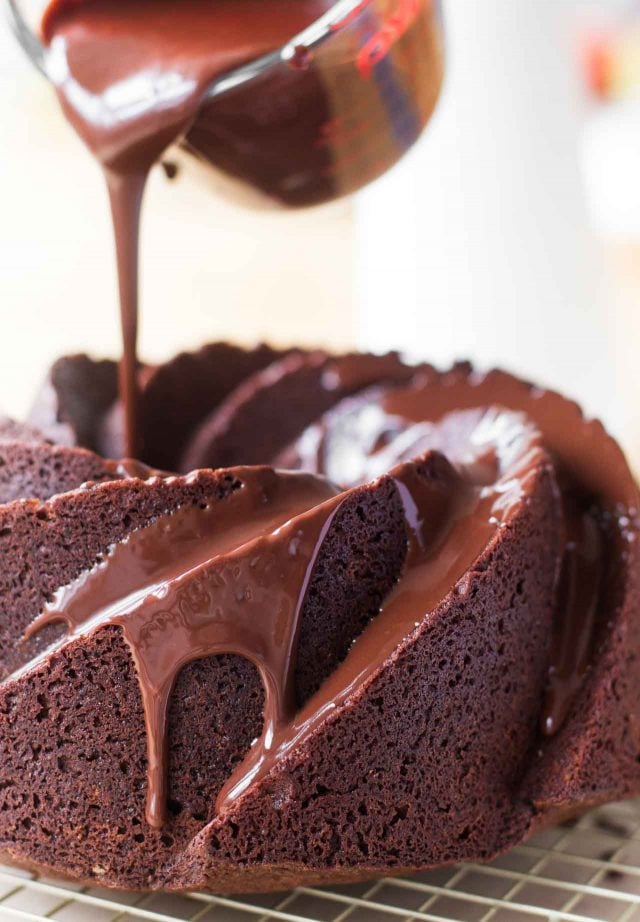 I think the secret to get the creases not to have little holes, from air pockets (since I did my best to rap the cake on the counter a few times after adding the batter to the mold) is to either pipe the batter into the creases before baking the cake, or brushing up on your Photoshop skills if you’re planning on taking pictures of it and sharing them.

Or, you can let it go. They didn’t bother me, especially when they were deliciously filled in with the thick bittersweet chocolate glaze, which is the fun part of making glazed bundt cakes like this. They’re not fussy, and you don’t need to be an all-star cake decorator to have success with them. 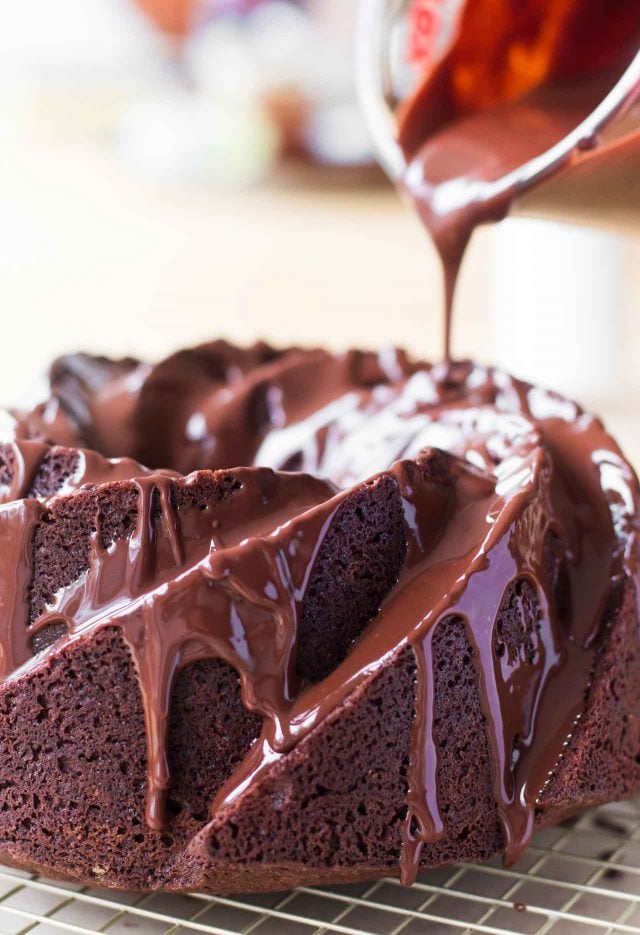 My challenge was figuring out how to click the shutter button on my camera while icing a cake. No wonder it took Cenk six years to finish the book! (I didn’t think you could wait that long.) 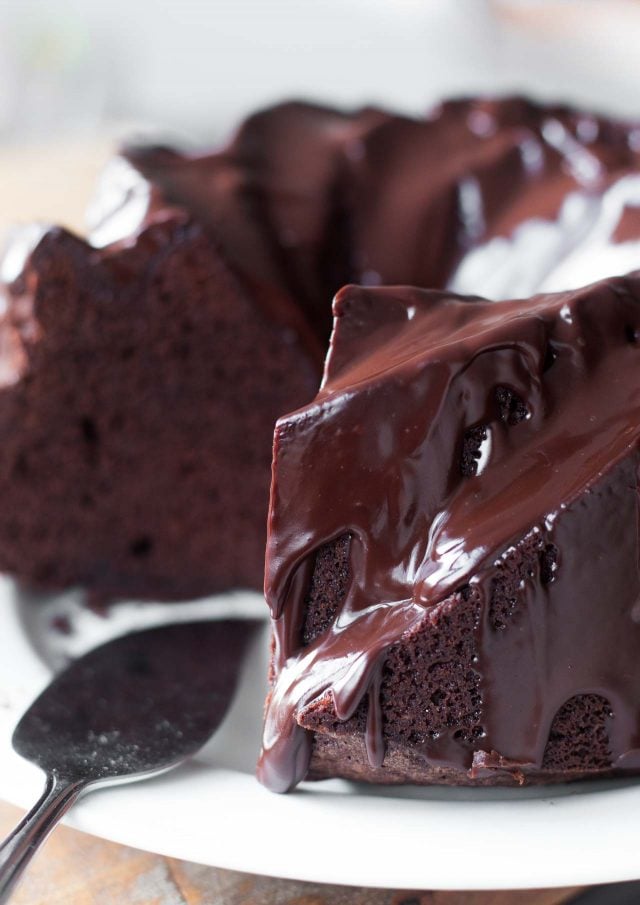 In the end, though, it doesn’t matter. The proof is in the pudding, or in the cake. 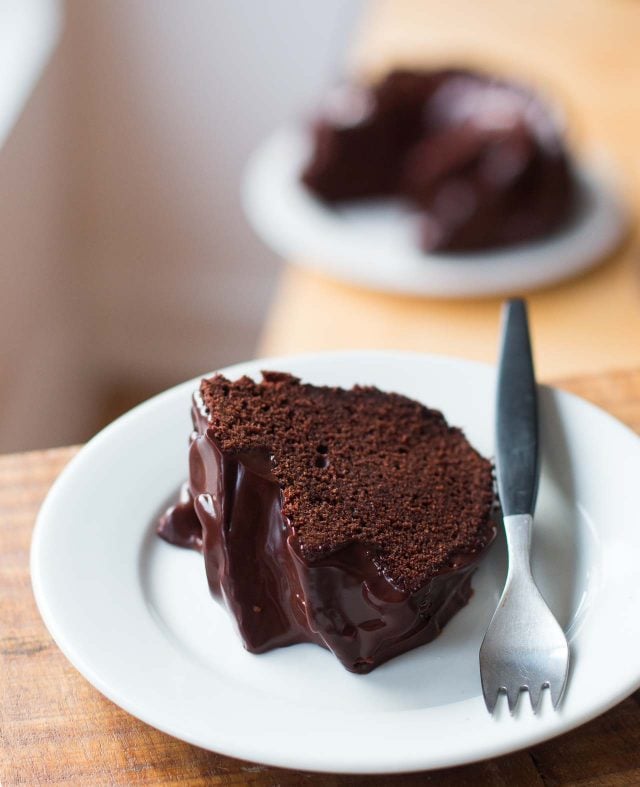 One tip is to make sure to slightly underbake the cake. There’s heavy cream in the batter to counter some of chocolate’s drying tendencies (chocolate is an acidic ingredient) so remove the cake from the oven when there are still moist crumbs clinging to the toothpick. Most chocolate desserts benefit from being slightly underbaked, and this doubly delicious chocolate cake is no exception.

Adapted from The Artful Baker by Cenk Sonmezsoy I hewed pretty close to the recipe in the book but omitted the additional sugar in the glaze. If you find it too bittersweet, you can add up to 2 tablespoons of sugar to it. The recipe called for using chocolate with a 70% cacao content but mine was in the range of 60-65% and it worked fine.
For the cake
5 ounces (140g) bittersweet or semisweet chocolate, chopped
1/2 cup (50g) Dutch process cocoa powder, sifted if lumpy
1/2 cup (125ml) heavy cream
1/2 cup (125ml) strong coffee
2 teaspoons vanilla extract
2 cups (280g) flour
1 1/2 teaspoons baking powder, preferably aluminum free
1/2 teaspoon baking soda
1/2 teaspoon salt
7 ounces (200g) unsalted butter, at room temperature
1 3/4 cups (350g) sugar
4 large eggs, at room temperature
For the glaze
5 ounces (140g) bittersweet or semisweet chocolate, chopped
3/4 cup (180ml) heavy cream
1 teaspoon vanilla extract
1. Preheat the oven to 325ºF (160ºC). Set the rack in the center of the oven. Generously, and thoroughly, butter a 10-inch (23cm) bundt pan.
2. Put the chopped chocolate and cocoa powder in a medium sized bowl. Bring the heavy cream and coffee almost to a boil, remove from heat, and pour over the chocolate and cocoa powder. Let sit for 30 seconds, then stir until the chocolate is melted and smooth. Stir in the vanilla.
3. In a separate medium sized bowl, whisk together the flour, baking powder, baking soda, and salt.
4. In the bowl of a stand mixer fitted with the paddle attachment, or by hand in a large bowl, beat the butter at medium-high speed until smooth and creamy. Add the sugar and continue to beat until light and creamy, about 3 minutes. Add the eggs one at a time, stopping the mixer between additions, to scrape down the sides, so the eggs are incorporated.
5. Remove the bowl from the mixer and use a spatula to stir in one-third of the flour mixture. Add half of the melted chocolate, then another third of the flour mixture. Finally add the rest of the melted chocolate then the last of the flour. While you're mixing to reach down to the bottom of the bowl with the spatula, as the dry ingredients tend to sink to the bottom.
6. Scrape the batter into the prepared bundt pan, smooth the top, and bake until a toothpick inserted into the center comes out almost clean, but with moist crumbs still attached, about 50 minutes. Don't overbake.
7. Cool the cake on a wire rack for 10 minutes, then turn the cake out onto the rack and cool completely.
8. Make the glaze by putting the chopped chocolate in a medium-size bowl. Heat the heavy cream in a small saucepan until almost boiling then pour over the chocolate. Let stand for 30 seconds then stir until the chocolate is smooth and melted. Stir in the vanilla extract.
9. Set the cake with the wire rack over a sheet of parchment paper. Use a spoon or ladle to cover the cake with the glaze. My glaze was pretty thick (as you can see from the photos in the post), but if yours is too runny, let it cool down a bit until it's thicker. (Any glaze that slides off can be saved to spoon over ice cream, according to Cenk. I stirred it back into the glaze, because there wasn't any cake crumbs in it.)

Serving: Serve the cake at room temperature. It's a pretty rich cake although could be served with whipped cream or ice cream,

Storage: The cake will keep for up to three days at room temperature, covered. 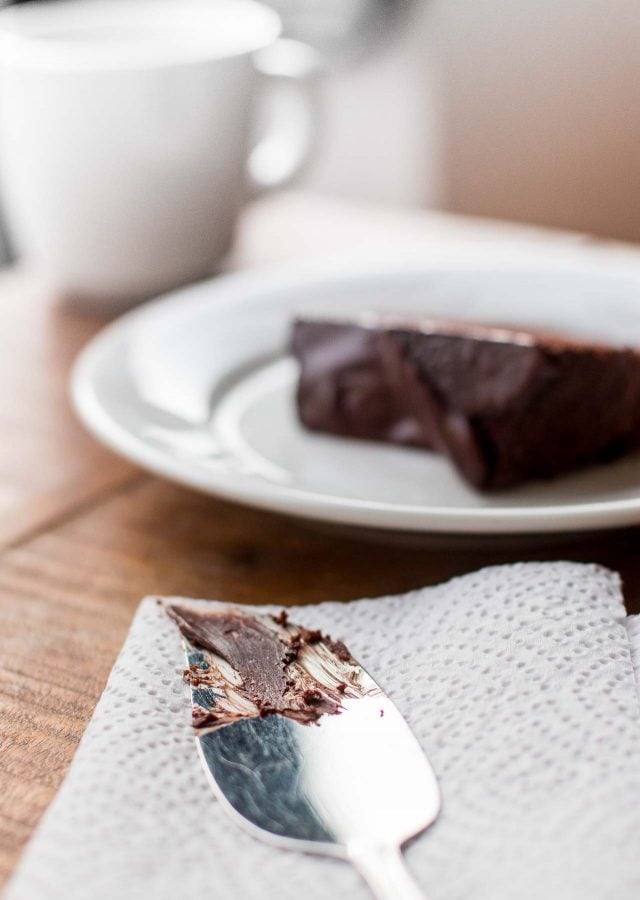