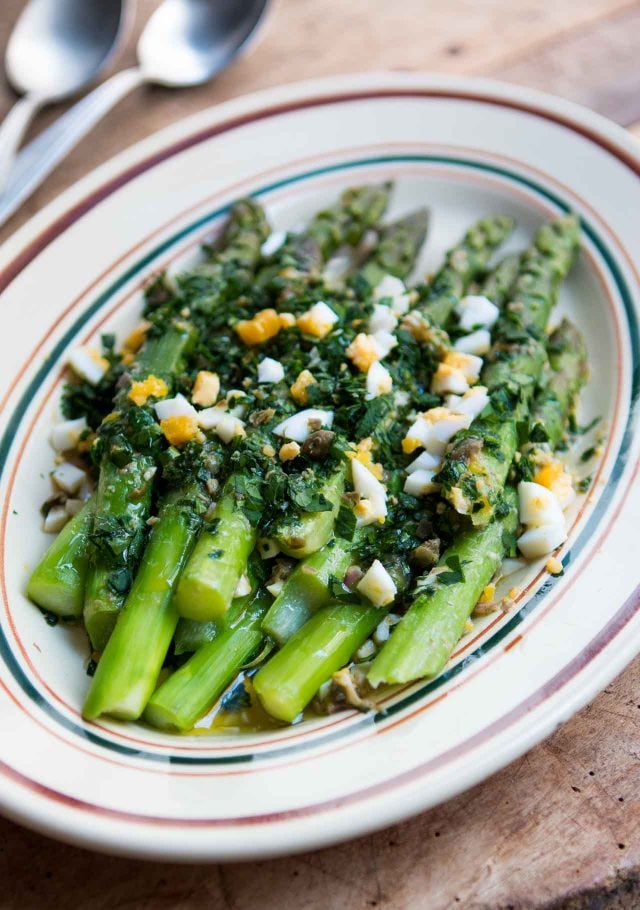 I came to the conclusion a while back that there isn’t a vegetable that’s not better roasted. I backtracked a bit, not just because that idea was too many double-negatives in one sentence, but thought that peas probably aren’t better roasted. I haven’t tried them; the idea of tiny peas being reduced to a shriveled bb’s doesn’t sound appealing to me. And while I know a lot of people like to roast radishes, boasting that they’re better than fresh ones, don’t believe them. 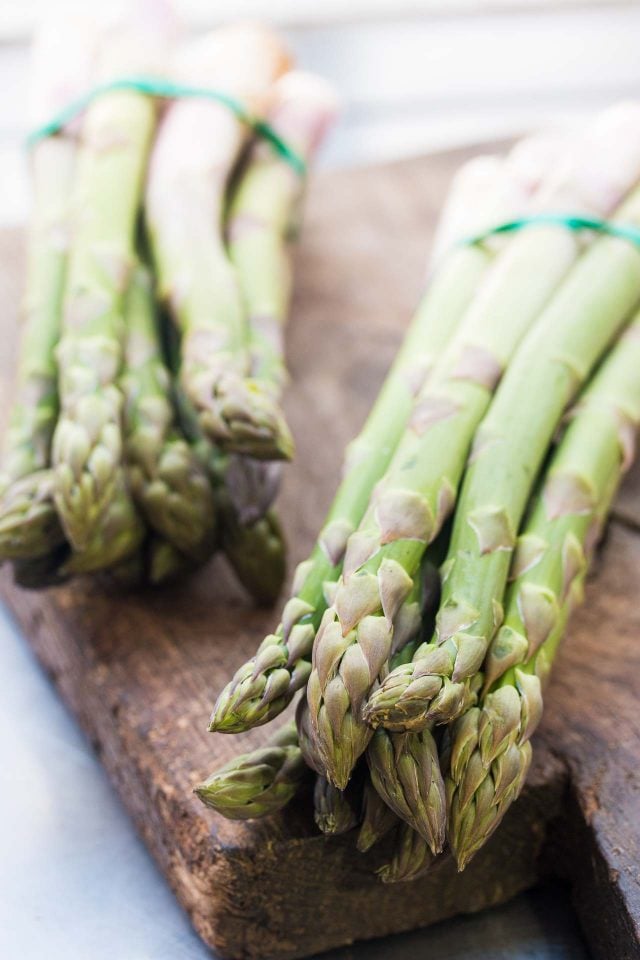 Then I go nuts with it, and try to eat it as often as I can before it’s gone. I tend to roast asparagus, but I do like it steamed as well, especially when it’s tossed in a very flavorful dressing, like this one. Sure, you can now find asparagus all year ’round, but I wait until spring when it’s truly in season. 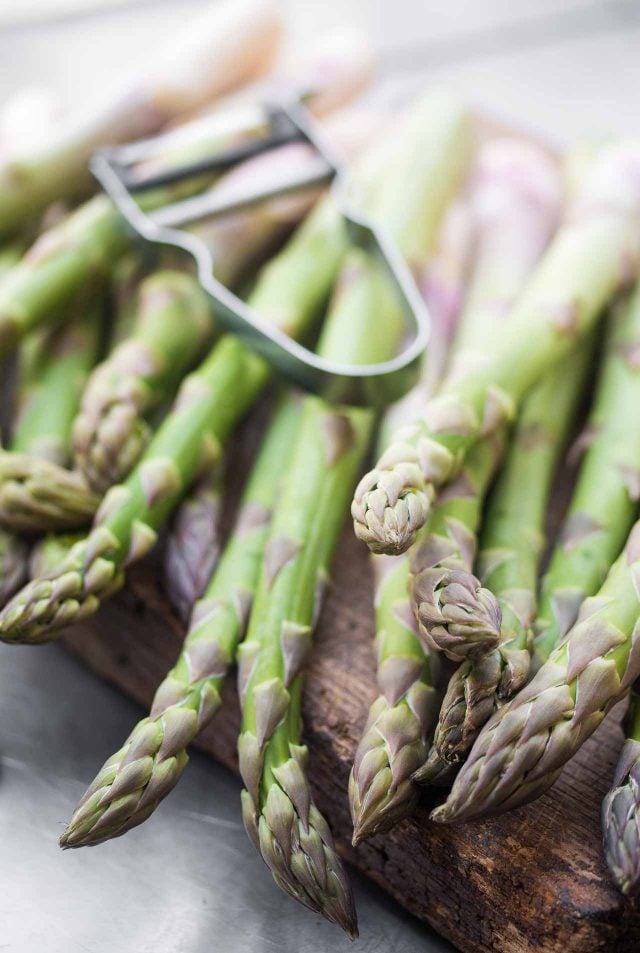 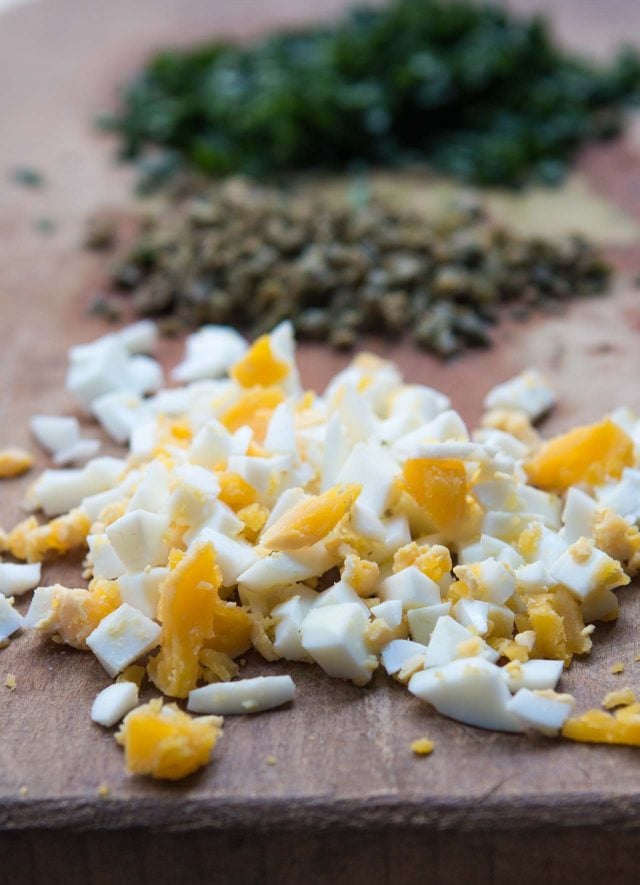 Someone recently asked me if it was necessary to peel asparagus. First off, let me say that some people like those pencil-thin spears of asparagus, but I prefer the big, wide fat ones, that are nice and meaty. The thin ones can be chewy, in my experience, although they usually don’t need peeling, so you save on that step if you’re not up for it.

But I don’t mind peeling it, which I only do for the bottom part of the spears. When you peel some yourself, you’ll notice that the shavings that come off can be tough and you don’t want to eat those. Asparagus is one of the world’s truly luxurious foods, which fortunately is within reach of a lot more people than other luxury foods, so when you eat it, you want it to be as perfect of an experience as possible. So the answer to whether or not you should peel thick asparagus is a resounding “Yes!” 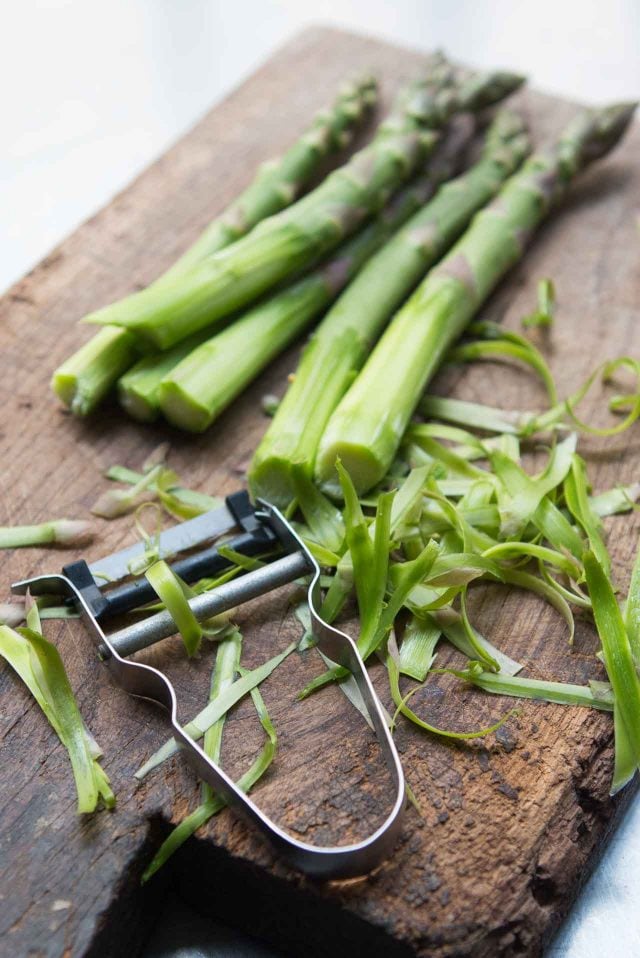 Another question that comes up is whether white or green asparagus is better. For years, Americans felt deprived because we didn’t have white asparagus. And in France, green asparagus was more the exception, rather than the rule. Over the last few years, there’s a lot more green asparagus in France, probably because some of it comes from other countries. But there’s French-grown green and white (and sometimes purple) asparagus at the markets, so you can take your pick. 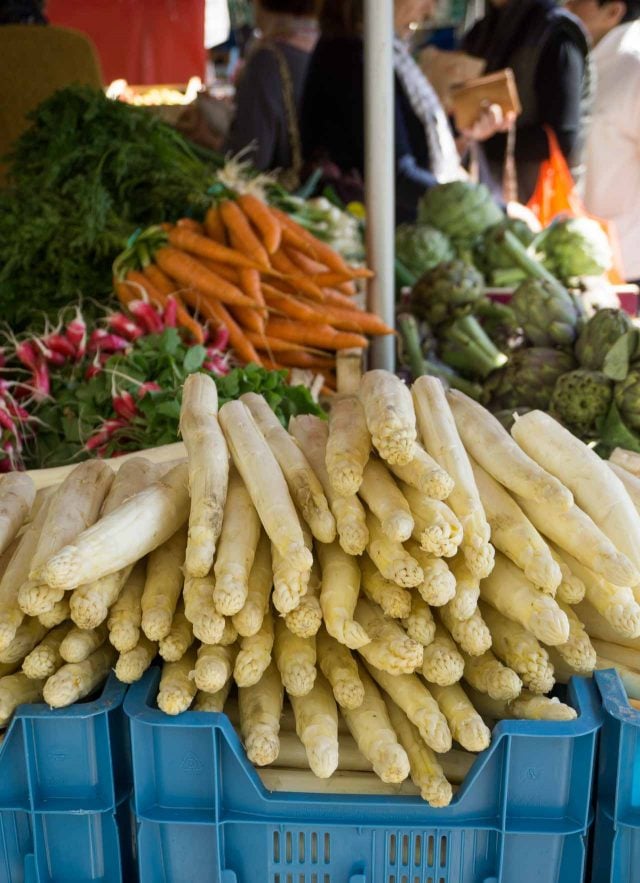 White asparagus is more perishable and doesn’t keep as well. It tends to be softer when cooked, and sometimes white asparagus can be bitter, which I’ve never experienced with green asparagus. But like our neighbors in Germany who love their spargel (isn’t that one of the best words, in any language?), white tends to get more press, and space at the market. 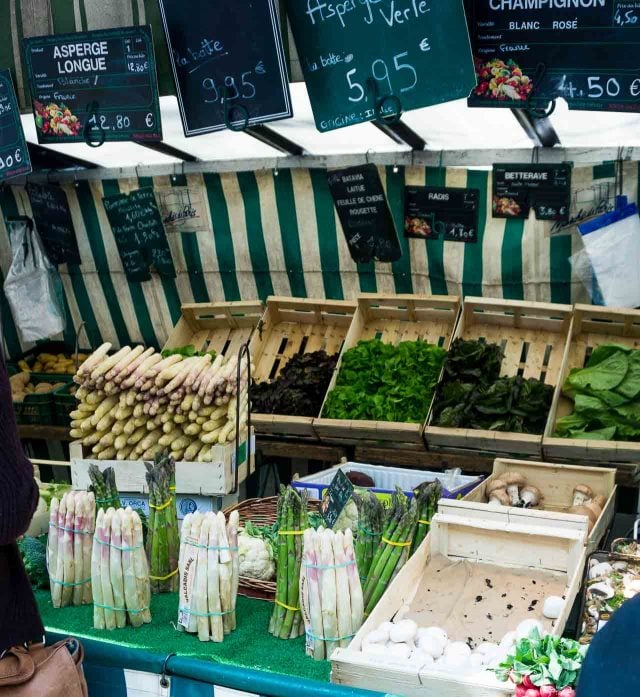 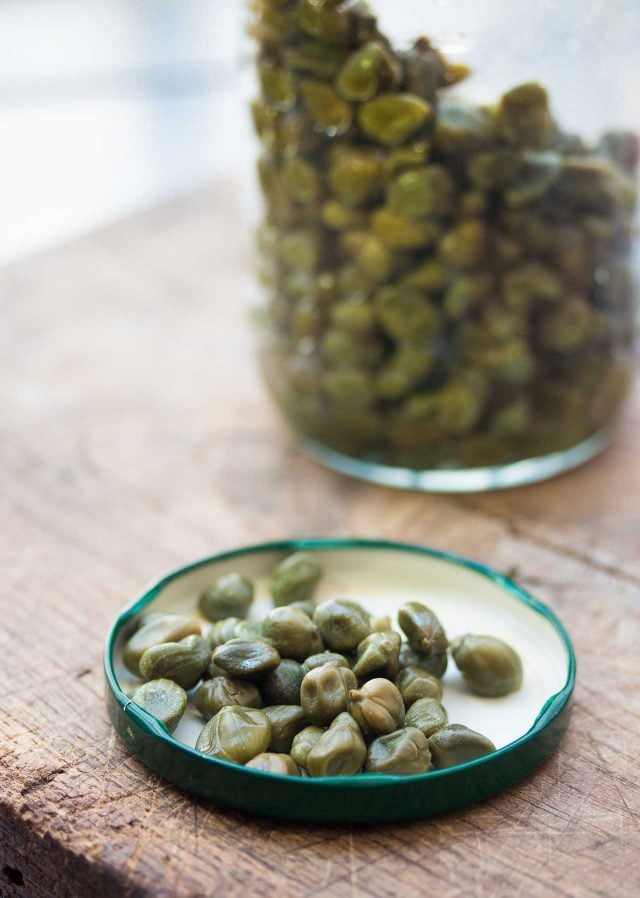 Speaking of France, the word “mimosa” means with hard-cooked eggs, and this recipe not only gives you a chance to give your vegetable peeler a workout but is also the time to hone your knife skills to cut the egg into little cubes. They don’t have to be perfect (which would be hard, since eggs are rounded) but they look nicer in the sauce and on the asparagus when they’re diced, rather than hacked away at, although they can also be shaved using the large holes of a cheese grater, too. But in this instance, I say go for the cubes. 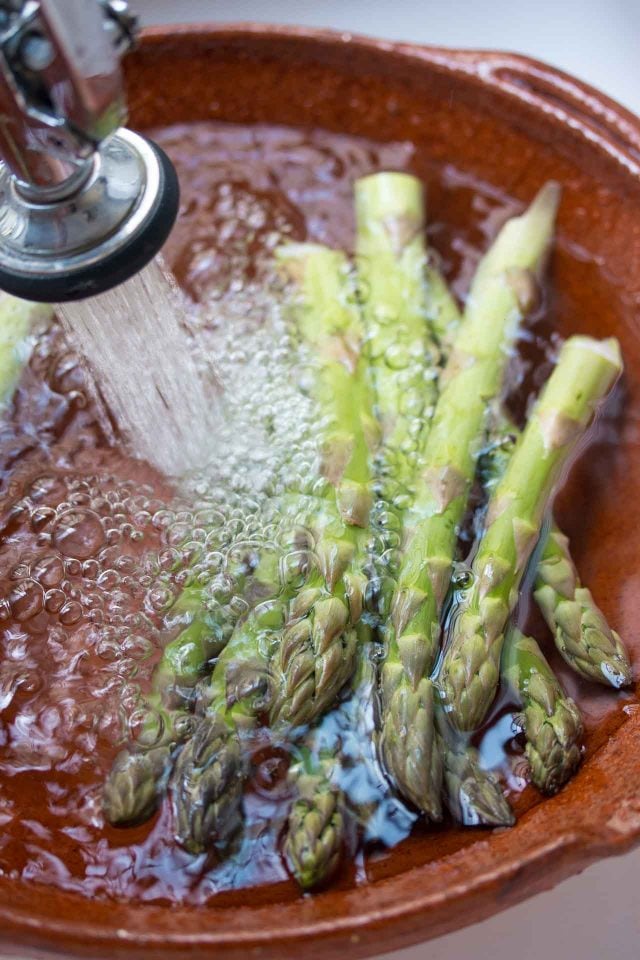 In addition to peeling asparagus, and every once in a while someone asks me what’s the big deal about flat-leaf parsley. The deal is that is has a lot more flavor than curly parsley, so that’s what I always use. 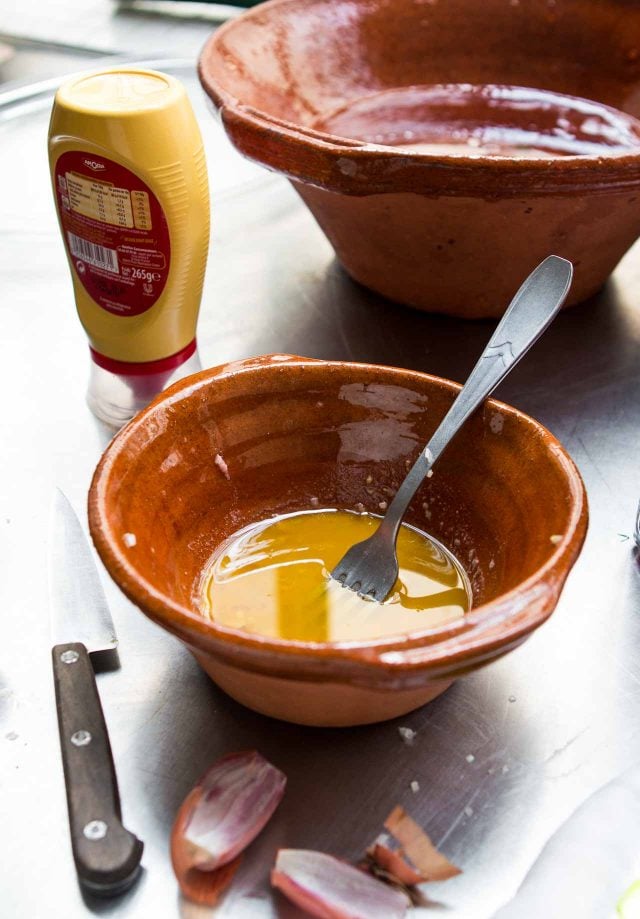 Now that we’ve gotten all those questions out of the way, I should let you know that I like to prepare the sauce and “add-ins” separately, then mix them together at the last minute. I like them to remain a little distinct until the last minute, and I reserve some chopped parsley and eggs to strew over the top so they’re not lost in the mix. 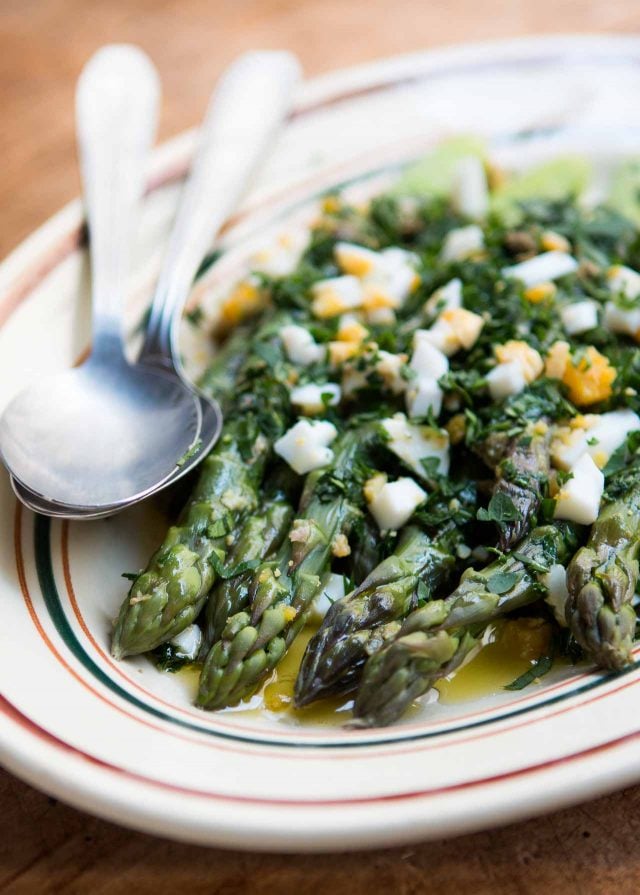 Lastly, this is a hands-on dish, and by that I mean that using your hands ensures that the dressing coats the asparagus, which you can ascertain by feel. Oh, and speaking of which, a while back, somewhere I mentioned that the French don’t usually eat things with their hands, but use a knife and fork. It often surprises Americans to see French people go at a burger with knives and forks, and New Yorker’s go apoplectic if someone doesn’t pick up pizza to eat it.

But someone sent me a message that they were visiting France and saw someone eating something with their hands (I think it was a baguette sandwich?), so I was wrong. There are, indeed, some things the French eat with their hands, and that includes asparagus. (And baguette sandwiches.) So while I have strong feelings about peeling asparagus, feel free to eat the spears however you want. Although for these, I’d stick with a knife and fork. 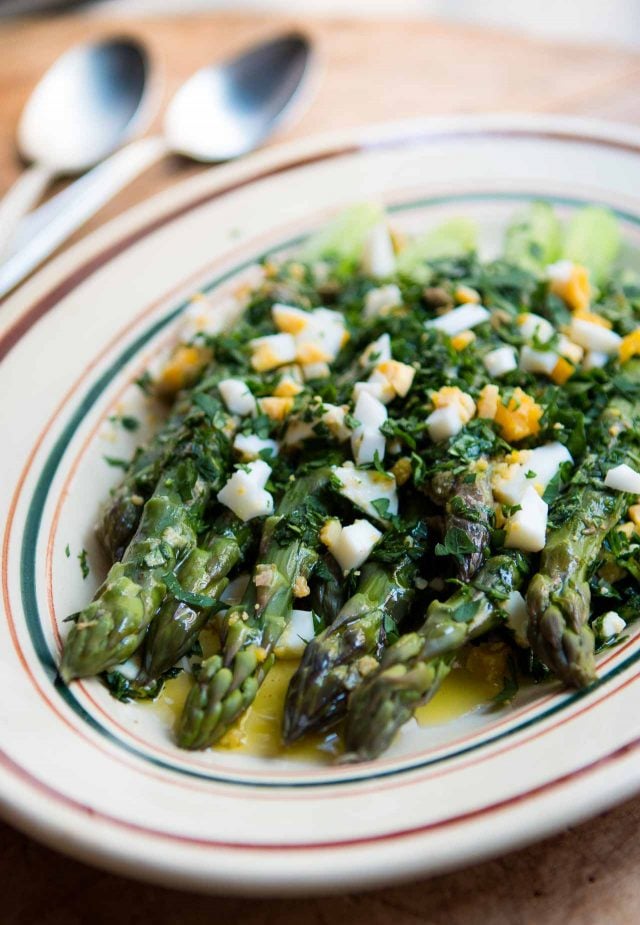 This makes 2 main course-sized servings. You can easily double the recipe to serve more. Capers should be rinsed before using, and squeezed a bit to remove excess water. If you're interested in learning how capers are grown and preserved, check out my post, Capers in Pantelleria. To hard-boil the eggs, slide the eggs into a small saucepan of gently boiling water. Let the eggs cook for 9 minutes. Drain the water out, add ice to the pan, and some water, to cool them down quickly. I find that shaking them a bit in the water, encouraging them to crack a bit, makes them easier to peel. You can certainly modify the herbs to your liking. Tarragon, chives, or marjoram would also be nice added to replace some of the parsley. I've been known to add a couple of minced anchovy filets to the dressing as well.
1 to 1 1/4 pounds (450-560g) asparagus spears, about 12 thick spears
1 tablespoon red wine or sherry vinegar
1/4 teaspoon kosher or sea salt
1-2 teaspoons minced shallots
1 teaspoon Dijon mustard
1/4 cup (60ml) extra-virgin olive oil, plus more for finishing the asparagus, if necessary
2 tablespoons coarsely chopped capers
2 hard-cooked eggs
1/4 cup coarsely chopped flat leaf parsley
1. Hold the asparagus at both ends and snap off the tough stem ends. Usually the tough stem will part with the tender part of the asparagus spear in just the right place. Submerge the asparagus tips in water to remove any grit.
2. Prepare a wide bowl of ice water and set aside. Steam the asparagus until tender. Usually it takes 5 to 6 minutes for thick spears, although best to check before those times since you don't want overcooked asparagus. The tip of a paring knife inserted into the center of a spear should meet little resistance.
3. Remove the spears from the steamer and plunge into the ice water just until cool, then remove and let drain on a kitchen towel.
4. In a small bowl, mix together the vinegar, salt and shallots with a fork. Let stand 2-3 minutes, then add the mustard and olive oil. Stir well to combine the ingredients.
5. Peel and dice the hard-cooked eggs. Add the capers and about three-quarters of the parsley to the dressing, as well as three-quarters of the diced eggs.
6. Place the asparagus on a serving plate and pour the dressing over the spears. Use your hands to coat them with the dressing. Sprinkle the rest of the parsley and eggs over the top. If the asparagus has absorbed a lot of the dressing, drizzle additional olive oil over the top, and serve. 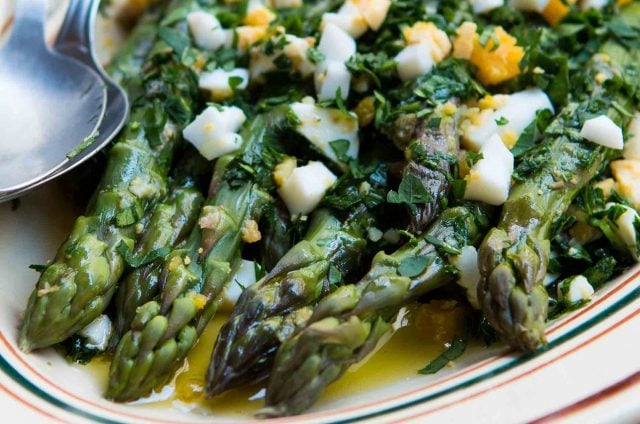 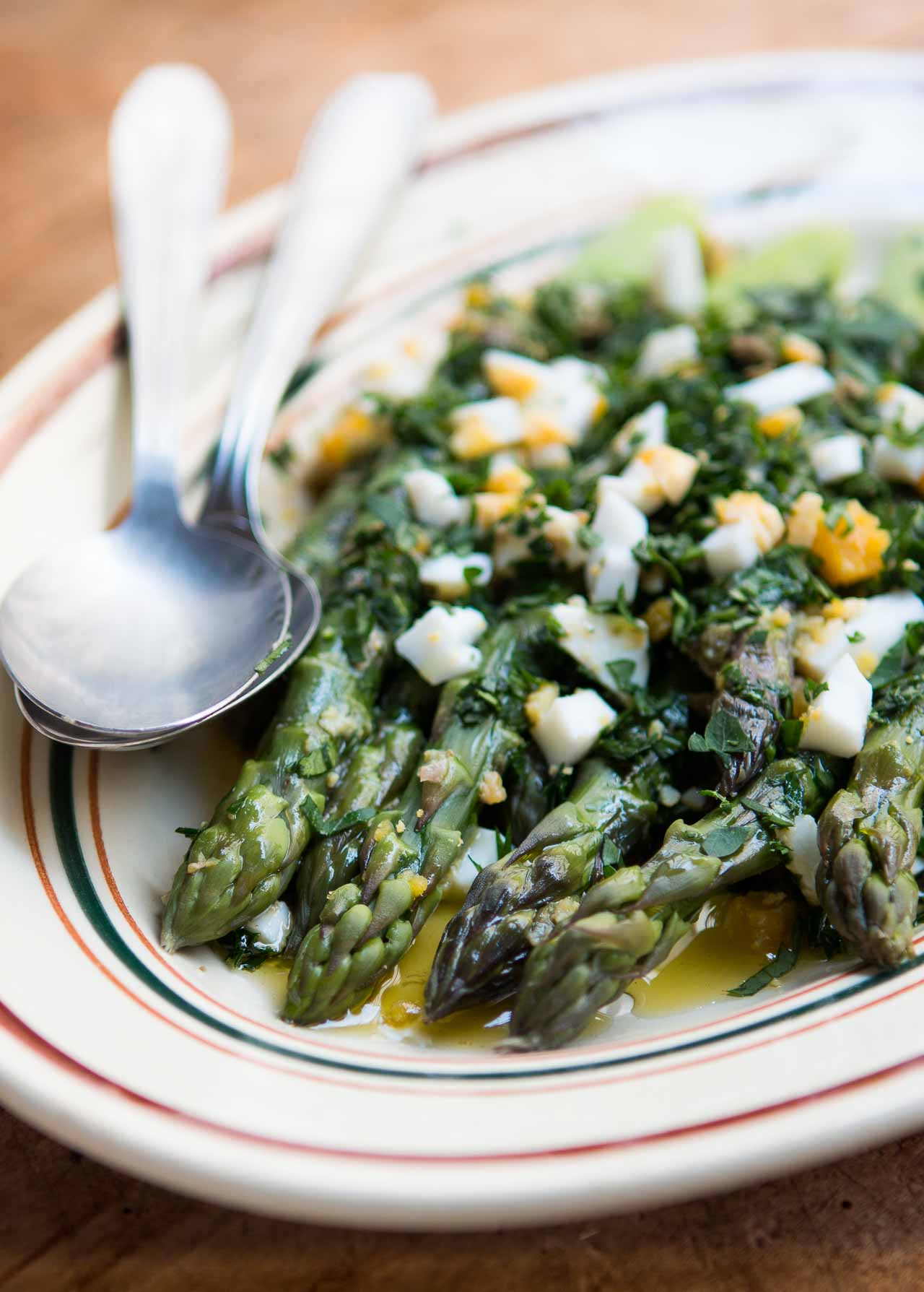