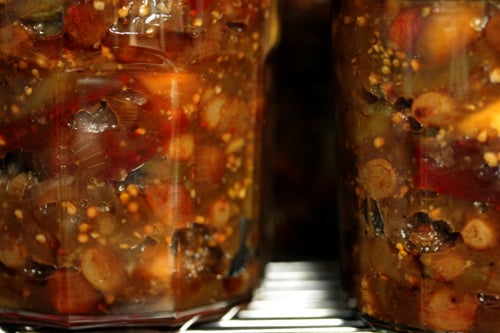 Not to stereotype, but one of the great things I’ve noticed about Indian cooks is that whenever you make or try out one of their dishes, instead of combing through the ingredients or instructions looking for cultural missteps, they’re always thrilled that you’re interested in cooking their cuisine*.

A while back I made Tandoori Chicken, which was one of the first – and only – Indian dishes I have ever made. Sure it’s not very inventive, but it was fun learning about the spices and other ingredients on my trip to the Indian market, and folks left a lot of encouraging comments and tips in various venues for me, offering advice and enlightenment.

Instead of saying, “No self-respecting Indian would ever put squirrel cheeks in curry sauce” they might say “My mother never would have put ostrich beaks in her chutney—but it looks fabulous!” or “Leftover marshmallows in a dosa? How creative!” The Indian cooks that I’ve come across have always been enthusiastic that others are exploring their food. 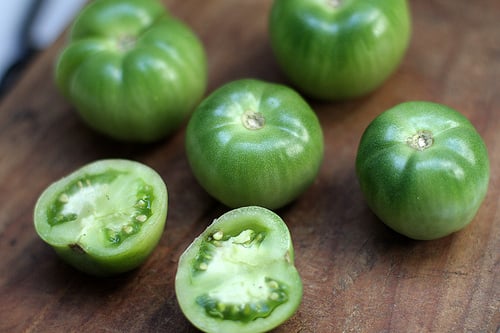 In that spirit, I was in the Indian quartier in Paris for dinner the other night and exploring one of the produce stores, and was thrilled to find what looked like tomatillos. My French friends could not believe how giddy I was while I carried home a big bag of them. But that giddiness ended when I got into the kitchen, split one open, and discovered by asking around online that they are actually some kind of green tomatoes.

A number of Indian cooks left comments for me on how to prepare them and my favorite was the one that said – “Just heat some black mustard seeds in oil until they explode, then add everything else.” I don’t know about you, but anything that involves exploding mustard seeds sounds like something I want to be a part of. I have to admit that I’m not necessarily on board with this whole ‘green tomatoes’ thing, perhaps because I’m a New Englander. And before everyone chimes in telling me how great they are, channel your inner Indian and realize that people have different tastes and respond to textures differently. 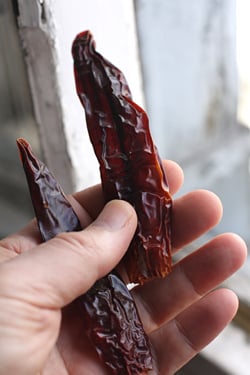 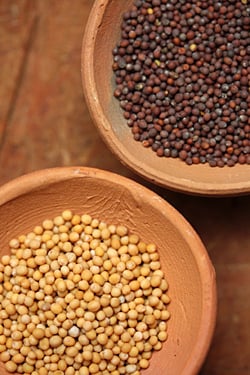 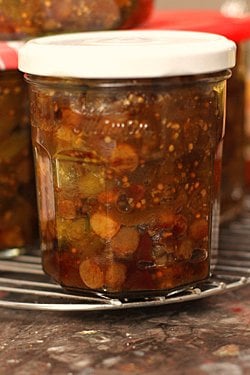 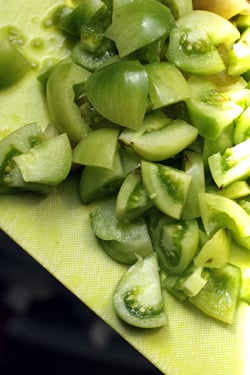 In the end, I’m on the fence about green tomato chutney. (Perhaps because I didn’t get to explode my mustard seeds.) Would I go out and buy green tomatoes just to make it? Well, probably not. I do like the little crunch of tomato and mustard seeds, though, and perhaps it just needs to sit and mellow for a bit to tone down the bite, which I think chutney benefits from. I suspect a lot of you may not have any use for green tomato recipes at the start of summer, but when tomatoes are on the wane and you find too many unripe specimens clinging to vines in your gardens, here’s a way to use up all those spares.

I did try peeling the tomatoes first, dropping them in boiling water for a few minutes, thinking the skins might be tough. But the skins refused to budge, so I took it as a sign they weren’t meant to be peeled. In the finished chutney, they’d softened nicely so my concerns were unfounded. If you don’t have shallots, use one red onion, thinly sliced. To make sure to stir continuously during the last few minutes of cooking, just to make sure nothing burns as the chutney turns jam-like. I’d didn’t preserve them in jars using any canning method, figuring I’d eat it within a month or so. If you want, there’s a link at the end of the recipe for more information about canning chutney.
1 3/4 pound (825g) green tomatoes, cored and cut into chunks
2 firm apples, cored, and cut into chunks (peeled or unpeeled)
1 cup (100g) peeled and sliced shallots
1 to 2 dried chiles split and seeded, or 1 fresh chile, seeded and finely chopped
1/3 cup (65g) chopped candied ginger
1 cup (250ml) apple cider vinegar
1 cup (160g) golden raisins
1 cup (180g) light or dark brown sugar
1 tablespoon yellow or black mustard seeds
1 teaspoon ground cardamom
1/2 teaspoon ground allspice
zest of one orange or 1/4 cup (45g) chopped candied orange peel
1. Mix together all the ingredients in a large, non-reactive pot.
2. Bring to a boil, then reduce heat to a low boil and cook, stirring frequently, for 45 minutes, until the mixture is thick and jam-like.
3. Once finished, ladle the chutney into clean jars.

Storage: Chutney will keep in the refrigerator for about one month.

Note: Non-reactive means one that is made of a material that won’t react with something acidic, such as stainless steel or glazed enamel.

Chai ho! The pleasures and perils of eating chutney in India (Hungry in Hogtown) 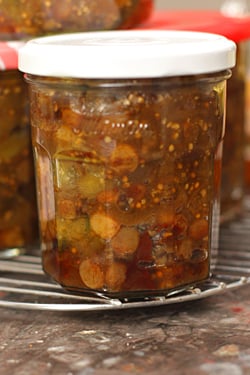