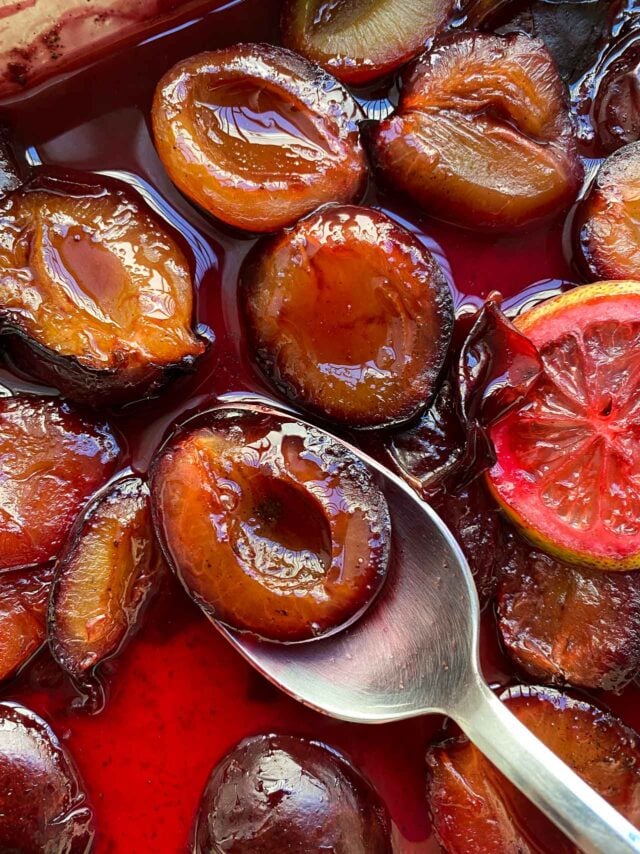 I made a statement recently on social media that plums were my favorite fruit. I guess I said the same thing about cherries, at some point, which I was reminded of. But I’ll confess that I may have also said the same thing about nectarines, figs, mangoes, and litchis at some point in my life. However plums really are my favorite fruit, and I’m happy that they stick around from summer all the way through the beginning of fall.

There are a lot of plums out there. In Northern California we had big purple Santa Rosa plums, as well as an array of others with names like Elephant Heart and Angelino, as well as pluots, a hybrid of apricots and plums. While they don’t show up in Paris, there are green Reine Claudes (which are close to being at the top of my list for favorite varieties of plums), tiny golden Mirabelles, and sturdy Quetsches, which hold their shape relatively well during baking. And while they’re not as tart as U.S. varieties (most of the tartness of plums is in their skins), they are reliably good, and flavorful, when baked or oven-roasted, as I often prepare them. 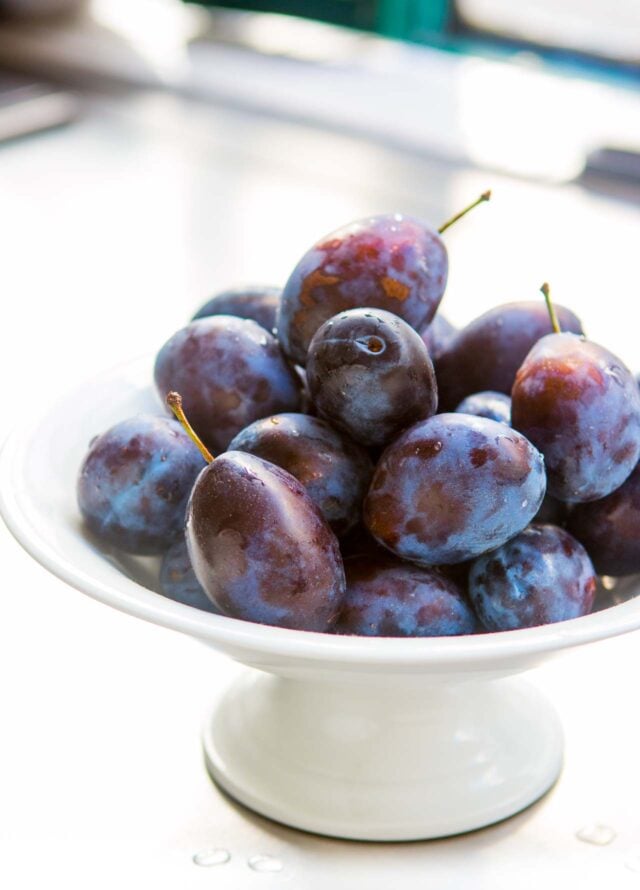 While I was grabbing what likely are the last nectarines of the season at the market the other day, there were plenty of quetsches in the next bin. They go by other names elsewhere, such as prune plums, and are closely related to Damson plums. You don’t have to get too hung up on the name; just look for violet, ovoid plums, and those should work just fine. 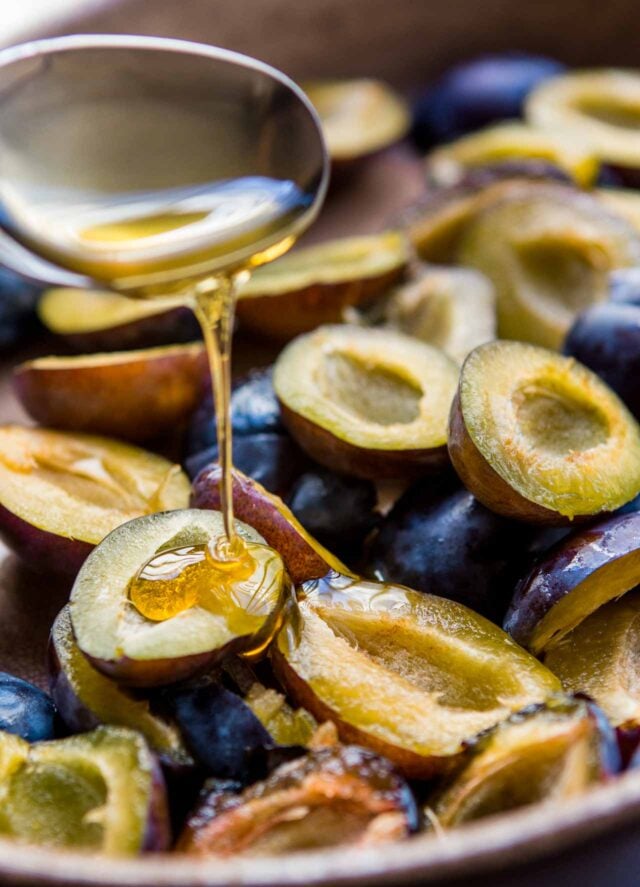 Plums have a lovely tendency, when cooked, to create their own beautifully-colored, naturally-thickened sauce, which is why I adore using plums to make jam. Here, a few spoonfuls of honey coax additional juices from the plums and mingle with them as the juices thicken after baking, and sitting for a bit.

For a variety of reasons, I have a lot of vanilla. And while prices have spiked in recently years, I feel well-invested in my baking future (and present) and added some vanilla bean powder, which is basically dried and pulverized beans. I like the little specks that show up here and there, but also the earthy vanilla flavor of the beans (versus extract) works really well with plums. But if spices are your thing, as they sometimes are mine, a cinnamon stick or other spices, can certainly fill in for the vanilla. 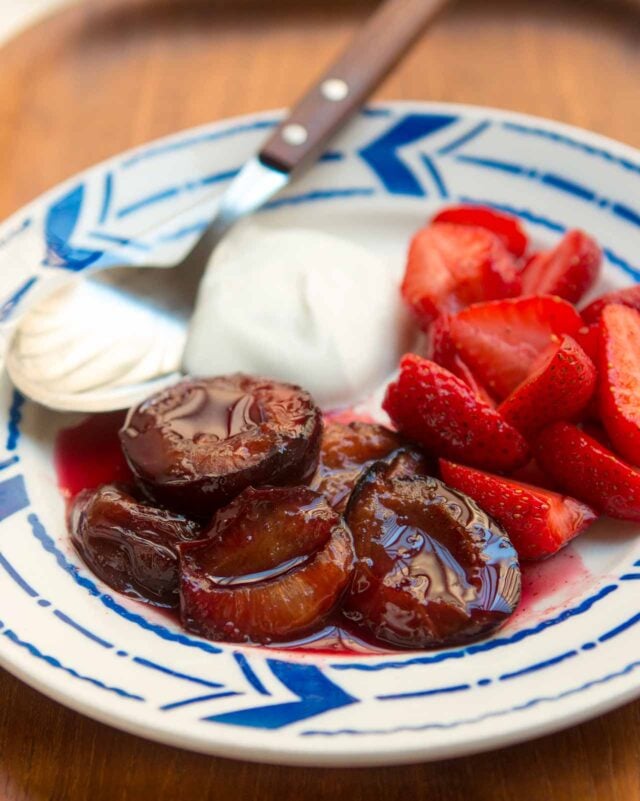 Quetsches hold their shape quite well during baking whereas other plums (if you want to use them) can cook very fast. So if you swap out another plum I recommend checking them after 15 minutes, or even sooner, to make sure they don't get overcooked. You want to take the plums out of the oven when they are soft and cooked through, but not mush. You can use rosé or vermouth in place of the wine. If you don't drink wine, water, apple, or orange juice would work. In place of the honey, you could use white or brown sugar. I keep them simple but you could spice them up using cinnamon and perhaps some allspice berries or cloves. (You may want to pluck those out before serving, unless you use powdered, so just a head's up.) If you want to include some raspberries, blueberries, or blackberries, add them close to the end of baking. I love these spooned over plain yogurt or ice cream, although they could also be served with a savory dish alongside grilled meat or chicken. Bonus: These freeze well and are a savior in the middle of winter when you're craving a taste of summer.
Servings 6 servings

Storage: The Oven-Roasted Plums will keep in the refrigerator up to one week. 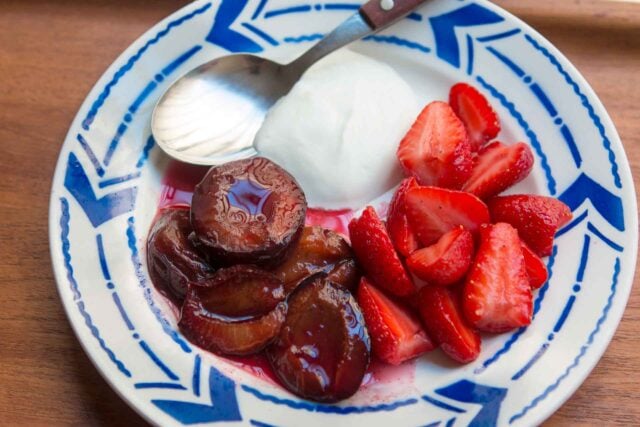