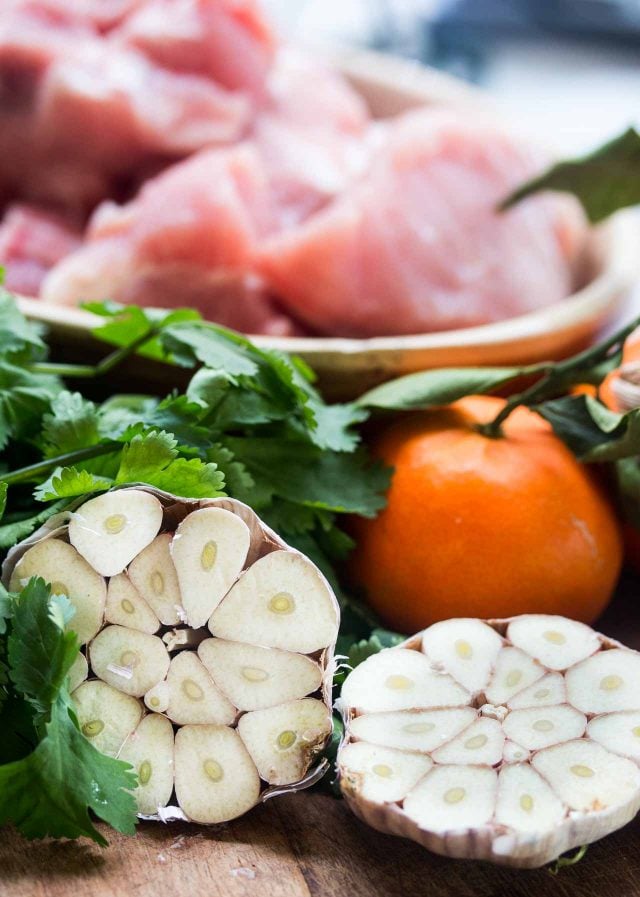 I wanted to end the year on a high note, namely, that I conquered the world of slow-cooking. But things didn’t quite go as planned. I tried to make the best with it, sharing some of the fun on my Instagram Stories. People were kind enough to offer some helpful comments along the way. Which I guess is the benefit of something taking 9, to 21 hours, to cook; you’ve got plenty of time to get advice.

“Get another brand of slow-cooker!”

“Get an Instant Pot!”

“Go back to your Dutch oven!”

While it was nice of people to offer tips and advice, the idea of cooking something for nine hours and not once looking into it, or touching it, seemed a little too far-fetched for someone who is a cook, who has been looking, touching, and tasting, along with the way, for too many decades to recount here. I like to check seasonings, feel the textures, and prod for doneness. But I was told every time I lifted the lid I was adding 30 to 60 minutes to the cooking time. So I resisted as much as I could, until I couldn’t resist, and checked on the progress. Which wasn’t quite happening as planned. 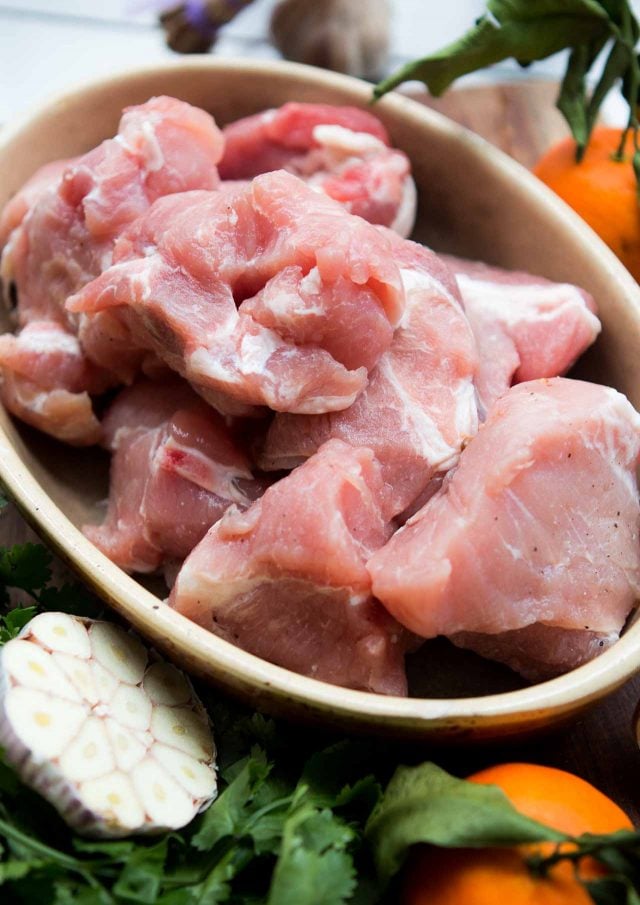 After two cooking failures with the slow-cooker, I decided to end the year with success. I decided to adapt a recipe from Dining In by Alison Roman. Her book got a lot of accolades, and I didn’t get to see it until I was in the States, and – wow – it’s pretty great. I loved her ideas for savory dishes, like this one for slow-cooked pork, embedded with the bold flavors of cilantro, garlic, coriander seeds, and citrus. All those in one dish? Count me in. However she cooks hers in a regular Dutch oven, and I thought, “This is the perfect recipe to adapt to a slow-cooker. Let me at it…” 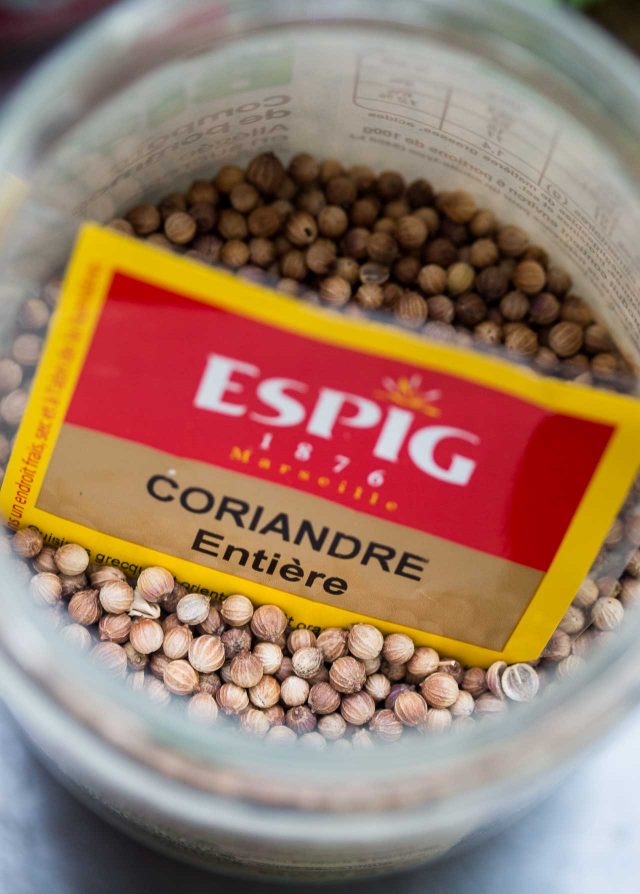 I may be another year older, but my memory still serves me right and I remember in the ’70s when everyone said I had to get a yogurt maker, which I did. Then people told me I had to get a bread machine. After all, 25,000,000 people sprung for one. Why shouldn’t I? (I didn’t.) Europeans implored me to get a life-changing Thermomix, and every time I mentioned one, a message would come from a Thermomix “consultant“, enthusiastically letting me know what a good idea the €1500 machine was, which you could only buy from a consultant.

Then it was a slow cooker. Then everyone said I had to get a sous-vide machine. (That one is still in the box here – gulp…) Then the word was that I definitely had to get an Instant Pot. So what’s next? And if I had bought all of those devices, I wouldn’t have room in my kitchen for my stand mixer (actually, two), a food processor, espresso machine, electric hot water kettle, hot air fryer, ice cream machine, juicer, two rice cookers (hey, I’m from San Francisco), a sparkling water machine, an immersion blender, a regular blender, a spice grinder, and a waffle iron (just kidding on that last one, although I’ve been told I need one of those, too). But where would I put that?

Lest you think I’m grumpy and old-fashioned, I’m very curious about those weighted blankets. And when I found out you could make wine in an Instant Pot, I began to look at it in a new light. If only it made rye whiskey, I’d be in business. 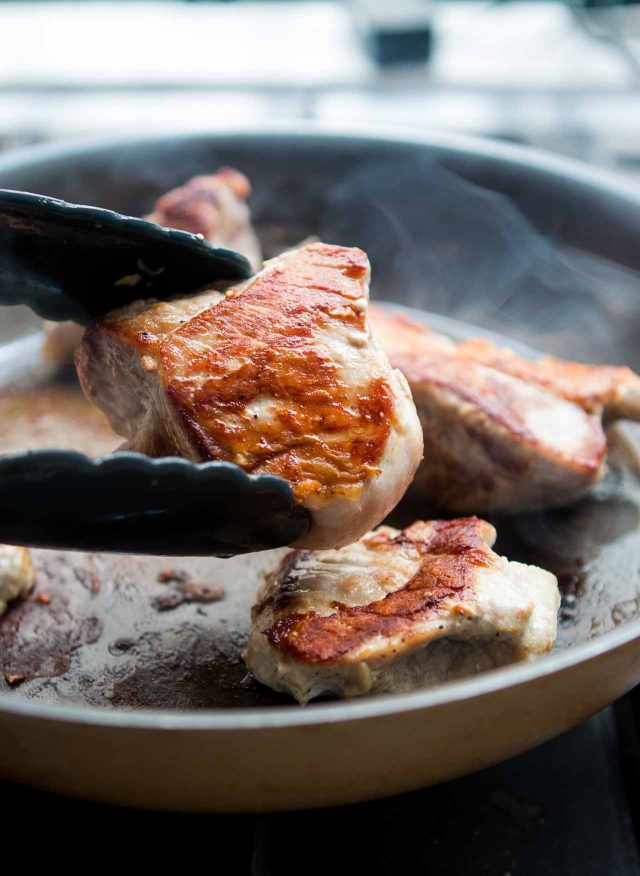 My slow cooker came to me because the company that I got my appliances from, owed me some money for repairs I had to have done on my dishwasher. (Which still doesn’t clean very well. But at least it works.) After several years of trying to get reimbursed (I learned the term faire le mort, from Romain, or “play dead,” as in “Don’t respond to emails, texts, or telephone calls”), they finally replied, offering me a choice of something from their small-appliance collection instead.

Unfortunately, weighted blankets weren’t on their list. If so, I’d probably be sleeping better right now rather than spending worrying about how you cook meat for nine hours without looking at it. So I went with the only machine I didn’t have: le multicuisier (slow cooker).

Nowadays, I only want something that lessens the amount of dishes you have to wash after using it. I made breadcrumbs with some leftover baguettes after a holiday fête last month, and by the time I cleaned everything up – cutting board, bread knife, two baking sheets, and the food processor, I had an hour-and-a-half’s worth of breadcrumbs, and was a half-day behind on a book deadline. My editor is going to kill me, but at least I didn’t waste 3 bucks worth of bread. Is someone invented a self-cleaning food processor, I’d be in, for sure. Although maybe if the waffle iron was self-cleaning, I’d have one of those crammed in one of my cabinets, too. 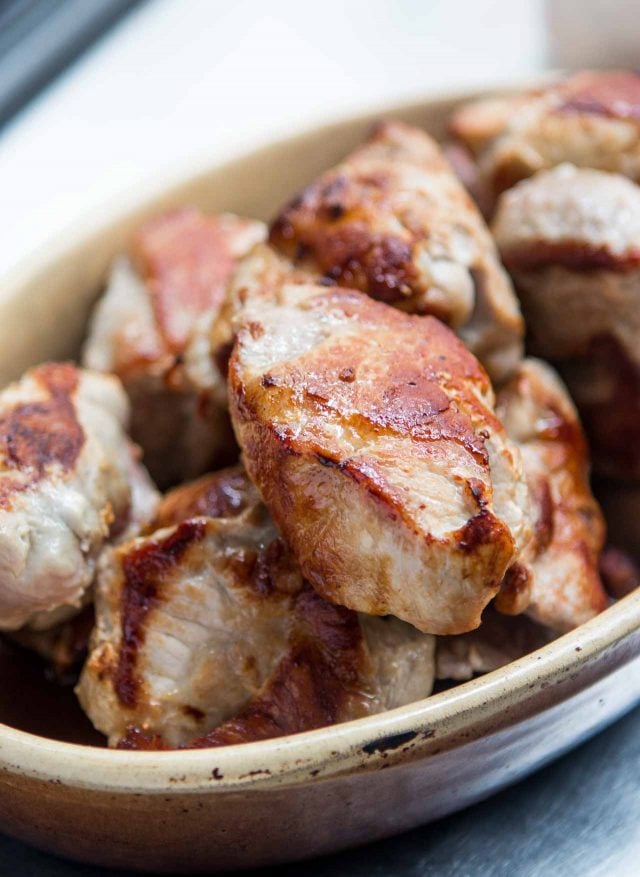 Since meat should always be browned before braising, I cut the pork shoulder in cubes to brown them for this dish. In addition to going completely rogue on Alison’s dish, I cut the meat into pieces; she has you brown the pork shoulder whole, which is a lot easier, but impossible to do in a slow-cooker that has a 6-inch (15cml) bottom. I ended up browning the meat in two old-fashioned skillets on the stovetop, which added two pans to my sink (not my dishwasher), to clean. 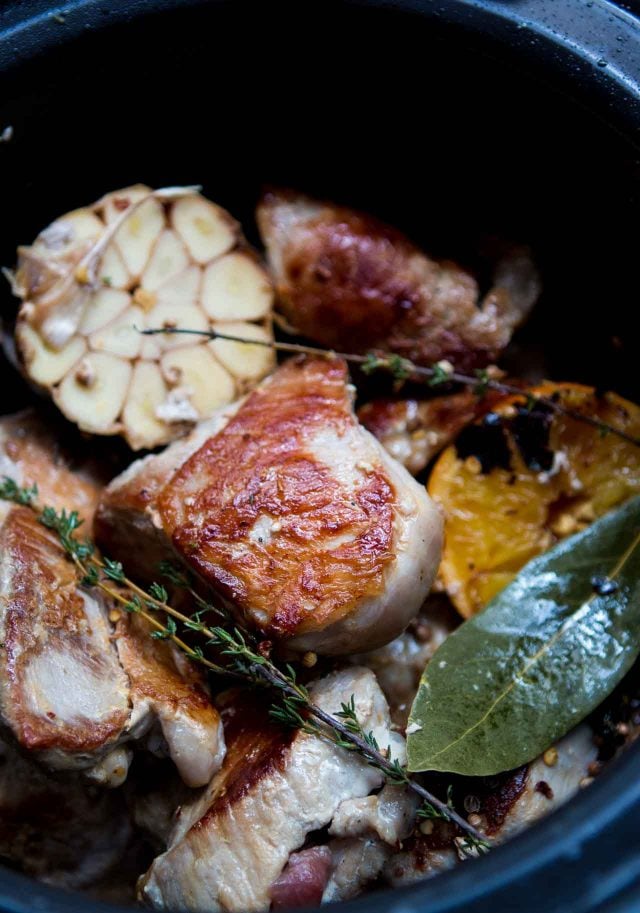 To make a long story short, I put everything in the machine, including the lovely charred tangerine and plenty of garlic, added the fresh herbs and orange juice, closed the lid, and pressed the “Slow” button, and waited. And waited, and waited. And waited. As a recipe tester, it’s excruciating not checking the doneness of something. People kindly offered, “Trust the recipe – just don’t check it!” But since I was cooking something in a substantially different way from the recipe, there was no template. In fact, I was making the template right then and there, and was going to give it to you. Or those of you that have slow-cookers. 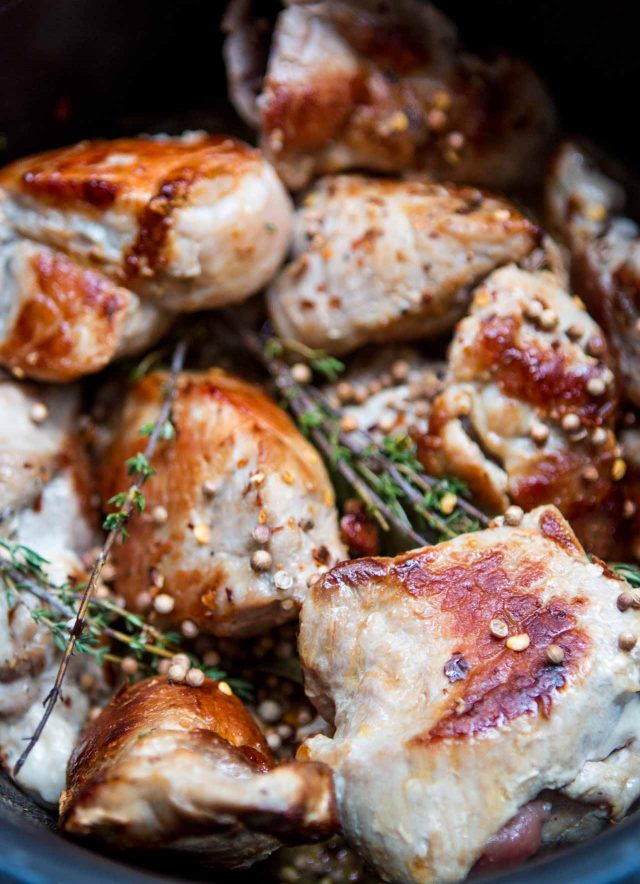 To make a long story short, after 9 hours, it was time to go to bed. So I chilled the pork down, and started it up in the machine the next day. Another several hours in la machine, and it still wasn’t tender. (Spoiler: I just had to check it while it was cooking. What else was I supposed to do?) So on the third day, dinner must be served. I dumped everything into a pot, set it on the stovetop, and simmered it for an hour, to perfection.

So my New Year’s resolution, which I never remember after January 7th, is to move on from the machines – except my stand mixer, and my dishwasher, although another one of my resolutions this year is to replace it with one that actually cleans the dishes. I did use my slow cooker for keeping a holiday meal warm, and it makes great rice, which is nice.