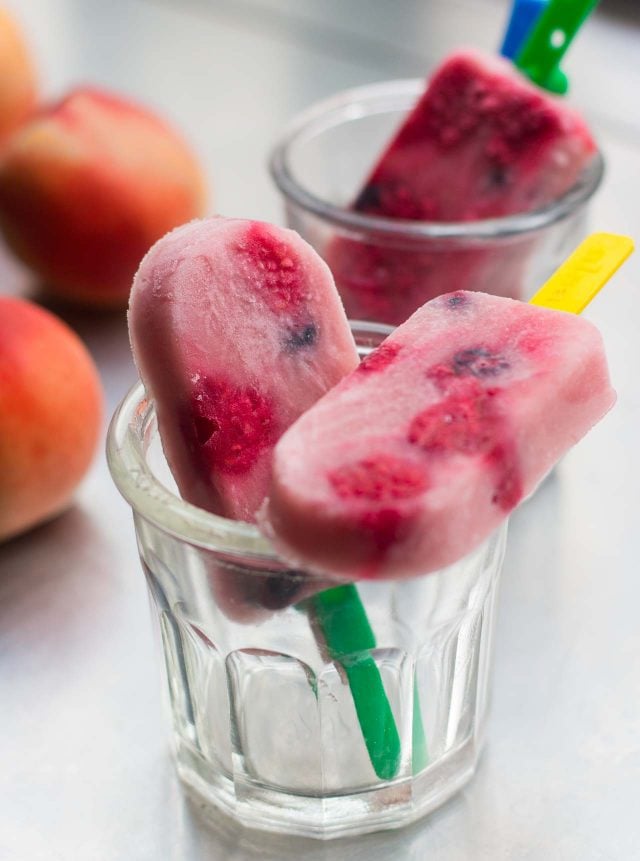 During the summer, at outdoor flea markets and brocantes, you’ll invariably find me on my hands and knees, rifle through boxes that are jammed with stuff, since ya never know what you’ll pluck out. I’m particularly keen on finding old French baking items, although I’ve learned that all those pretty little tin tart molds are best left to clutter someone else’s kitchen drawers. And since I can’t use them for sharing recipes since I’m guessing not many of you have a set of 8 to 10 French mini barquette molds, I have to leave those kinds of treasures behind. 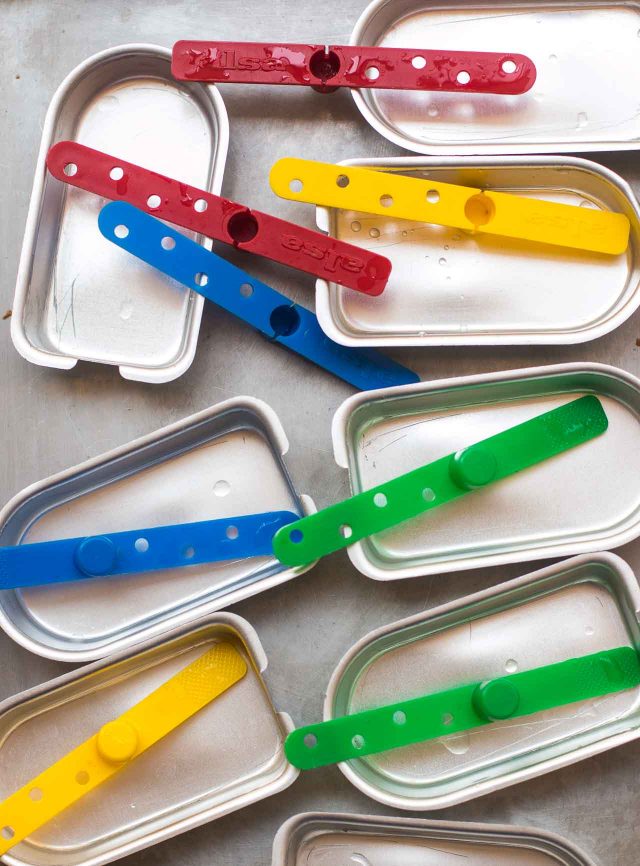 While I’ve had to hold myself back from buying mini tart pans and savarin rings, ceramic kugelhof molds (the first time I found one I was super excited, but found out through subsequent trips to flea markets that they’re pretty common…and cheap), various small, brightly-colored kitchen appliances from the 50s (whose styles were amazing, but I knew I’d never be able to get them repaired), and small cordial glasses, because I realized once you have a set, you really don’t need more. Although that’s never stopped me before…

But I was elated to find these totally insane popsicle molds with brightly-colored handles at a vide-grenier (flea market) out in the French countryside last summer. They were only €1 and the seller seemed all too happy to get them off her hands, and I was happy to oblige. I don’t think they were ever used, and were even in their original box. 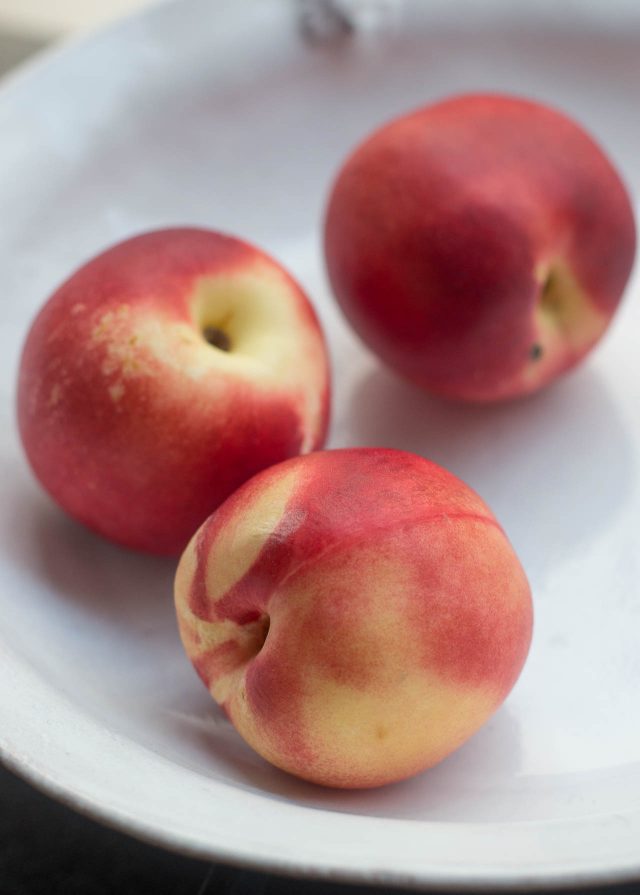 They’re meant to be used with “Alsaglace,” an ice cream mix, but I didn’t see any reason why I couldn’t use them with a homemade mixture. 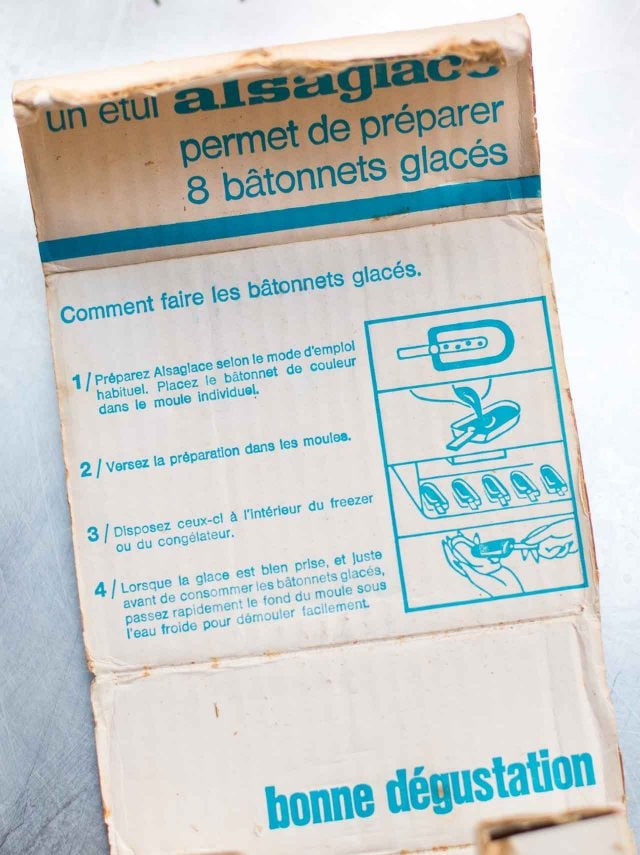 What was also kind of cool was that there was a notice inside (below), that if you sent them a friend’s mailing address, along with 7,50 francs, they’d send them a set, too. I guess presumably they’d prompt them to buy their ice cream mix as well. 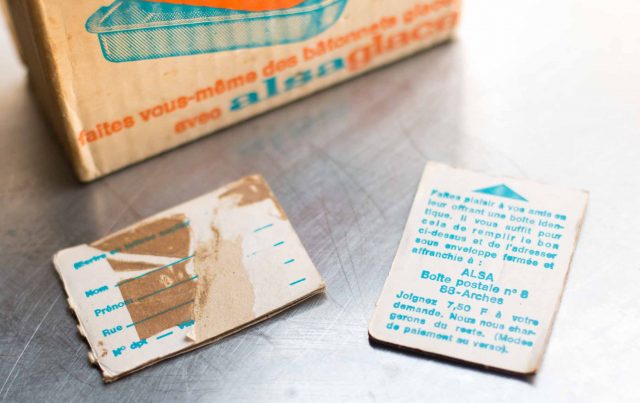 Since it’s summer, and since I know most of you can get popsicle molds (unlike mini barquette or tartlet molds), I made bâtonnets glacés, also known as glaces à l’eau, or ice pops. 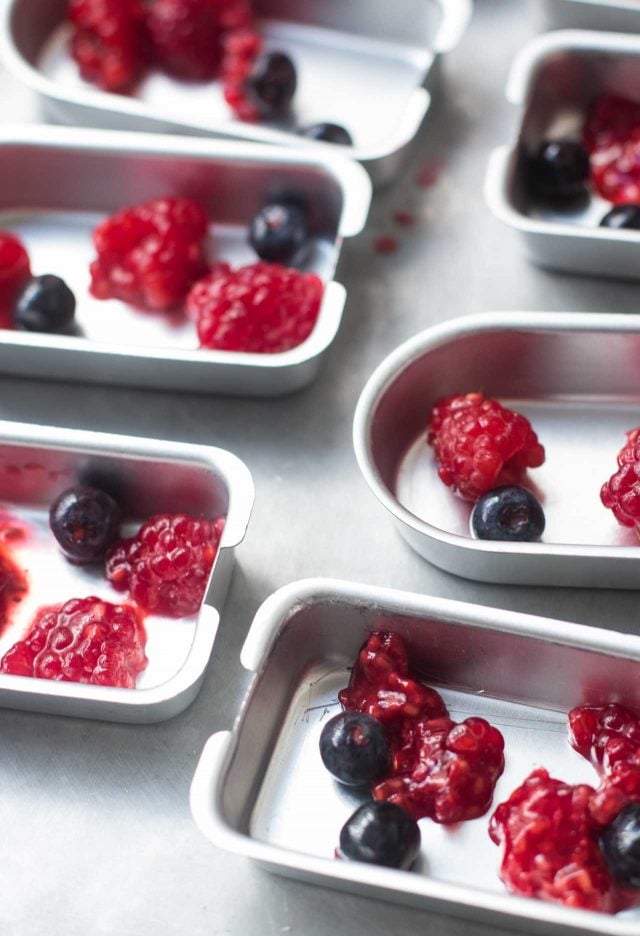 Not only was I proud of my “find,” but also a vision of pride due to the eco-friendliness of these molds, which were metal rather than plastic. I know that if there is even a wisp of plastic in something I’ve taken a picture of, I’m going to hear about it. So these are mostly metal and I hope that’s okay. I did the best I could. 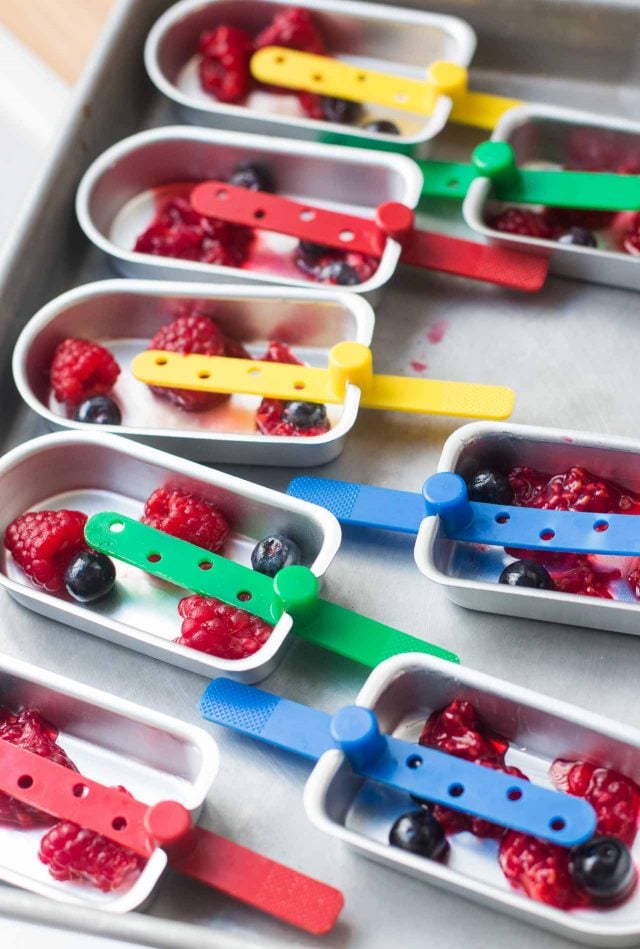 However the metal molds proved to be a little tough to get the popsicles out of. Waving them over a gas flame helped coax the popsicles out. When I did, I had to set them on a little plastic wrap-lined baking sheet and put them back in the freezer to firm up again. Yes, I will reuse the plastic wrap as I always do. And yes, not a single plastic bag gets tossed out around my place until it’s been used, and used and used and used, until it can’t possibly be used again. I also reuse paper towels, too. (If we were closer friends, I’d let you know about something else that we do to save our planet, which involves personal hygiene, which you can probably guess if you’ve read L’Appart.) 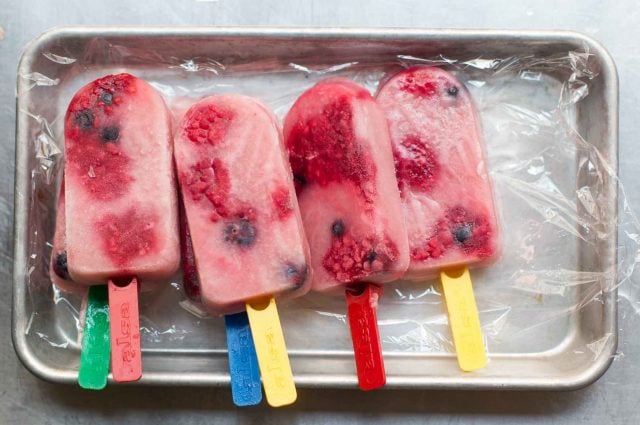 The popsicles made with white nectarine puree, dotted with tangy raspberries and blueberries, turned out great and were very refreshing to have during last week’s heatwave. I used white nectarines but really, you can make them with yellow nectarines, peaches, apricots, plums, or melon. For the molds, two cups (500ml) of popsicle mixture was the perfect amount, but check the capacity of yours; if your popsicle molds are larger, the recipe can be increased accordingly. 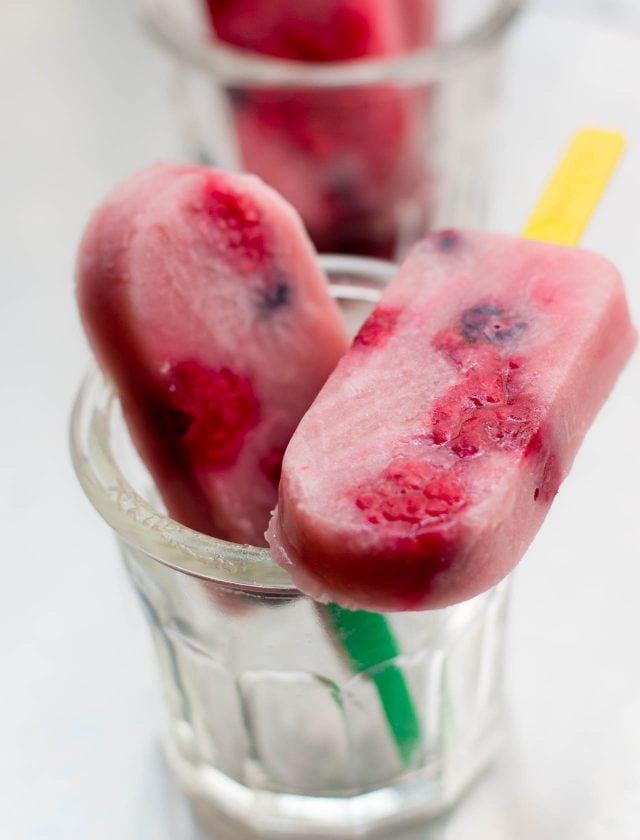 This summer, I’ve vowed to skip the flea markets and antique stores that might tempt me to fill the trunk of the car, and my kitchen cabinets, with more kitchenware. I’ve passed on several vintage ice cream machines, since I have one that works pretty well. And I’ve got enough ice cream scoops to equip a team of ice cream shop employees.

And fortunately for this recipe, you don’t need an ice cream machine, but I may break down and get a set of those slick silicone popsicle molds, because I can see there being more popsicles in my future, and I promise to use it over and over, and over and over, again. 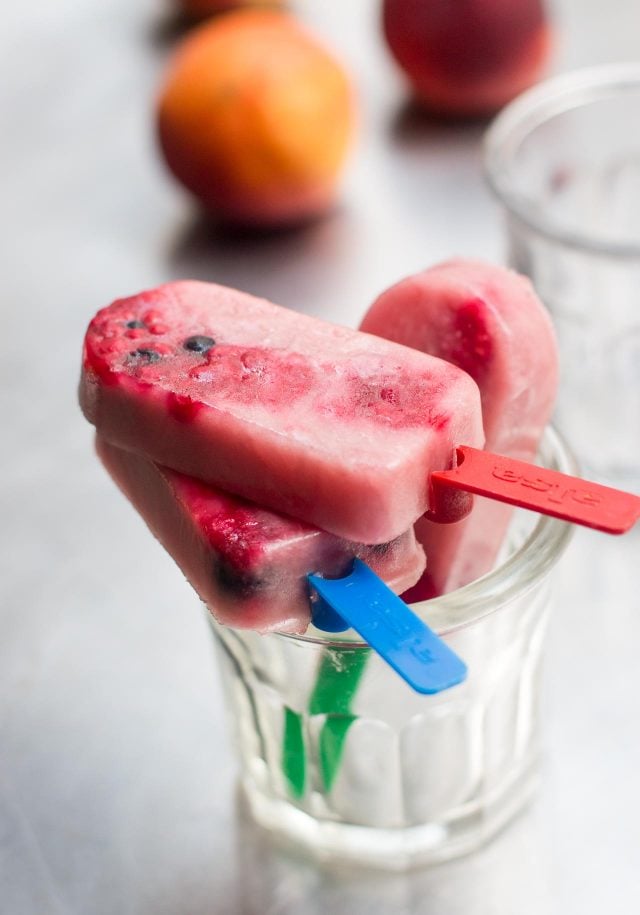 This batch made around 2 cups (500ml) of popsicle filling. So you can increase the recipe to suit whatever size popsicle molds that you have. You can reduce the sugar as you wish, or to taste. I wouldn't use more than I did, however, or the popsicles won't freeze as hard. The liqueur is added to help the berries stay softer, but that can be omitted if people are avoiding alcohol or you're serving these to kids. It's a fairly small amount and not very noticeable. Feel free to add more berries to the popsicle molds if you wish, too.
1 pound (450g) nectarines, about 3 medium or 4 small nectarines (yellow or white)
1/2 cup (125ml) water
3 tablespoons, plus 1 teaspoon sugar
freshly-squeezed lemon juice
about 3/4 cup (100g) raspberries, blueberries or blackberries, or a combination
1 teaspoon maraschino liqueur, or kirsch, vodka, or gin (optional)
1. Slice the nectarines and cook them in a saucepan with the water, partially covered over medium heat, stirring occasionally, until they're cooked through. Remove from heat and add the 3 tablespoons of sugar and a few drops of lemon juice. Let cool then puree in a blender or food processor. Chill until ready to use.
2. To make the popsicles, toss the berries with the remaining 1 teaspoon sugar and maraschino liqueur (if using), using your fingers to slightly mush the berries up a bit. Not only will that help the sugar and liqueur get into them, but it'll make some streaky swirls in the popsicles.
3. Divide the berries amongst the molds then pour in the nectarine mixture. Freeze until firm. 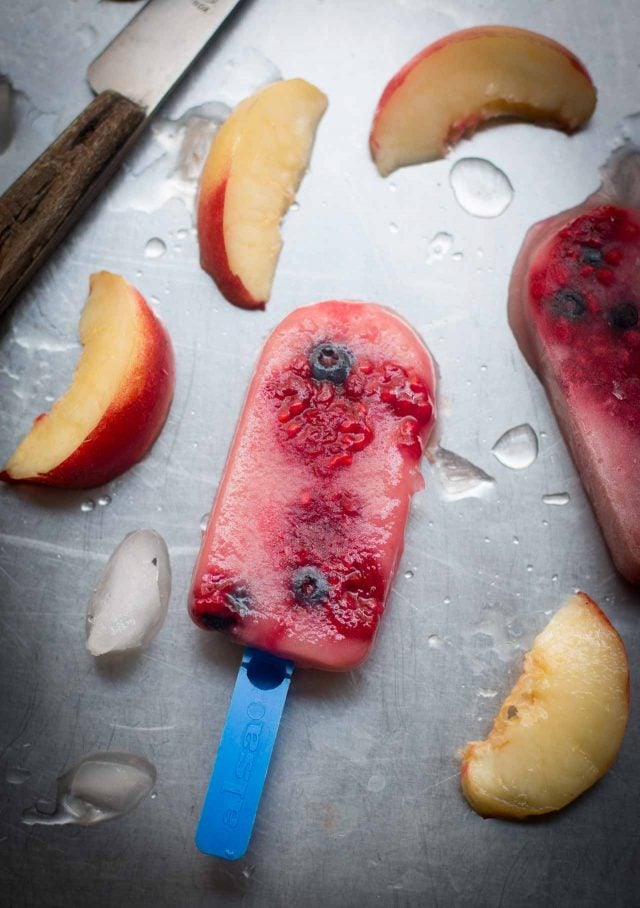 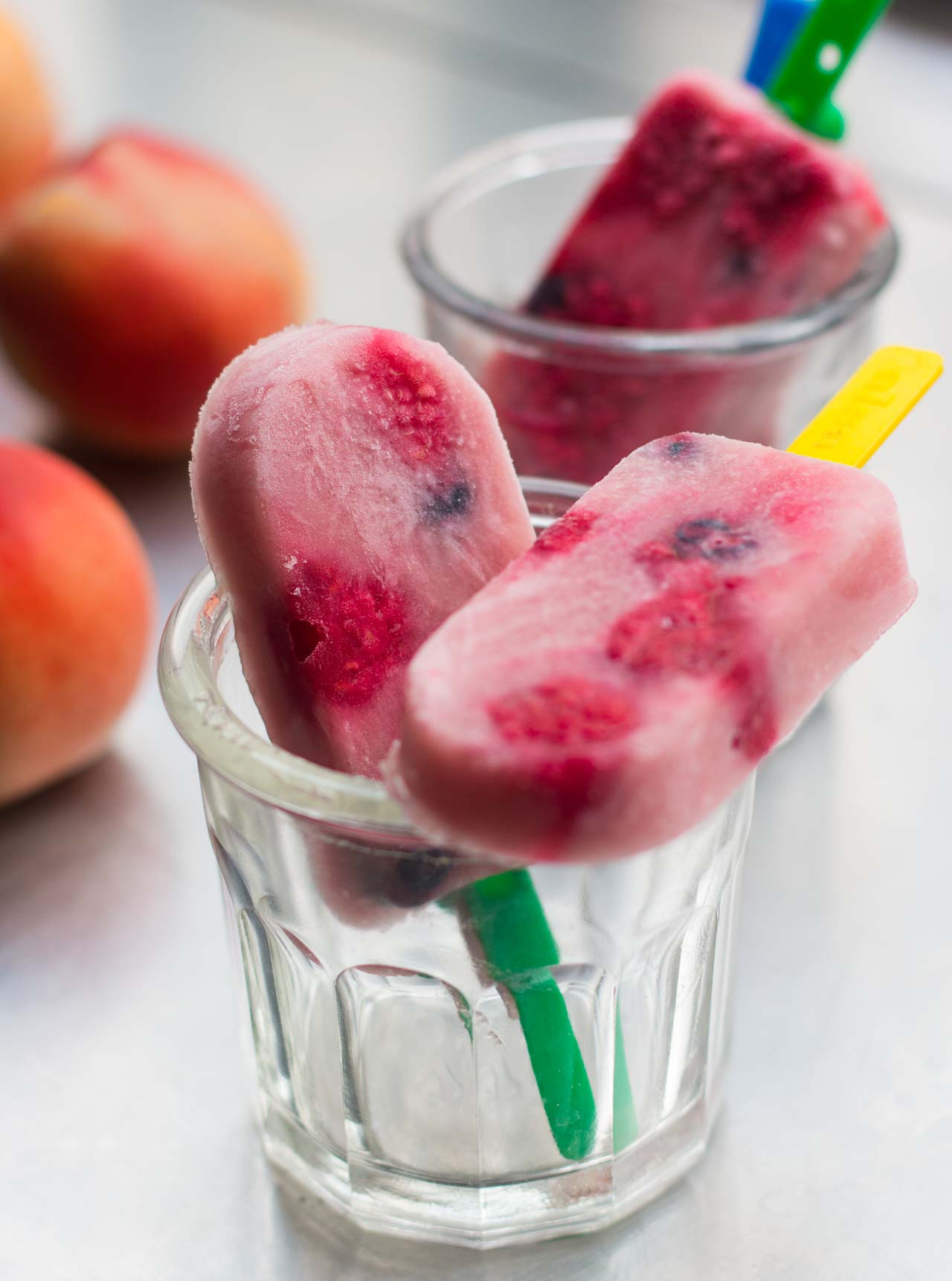