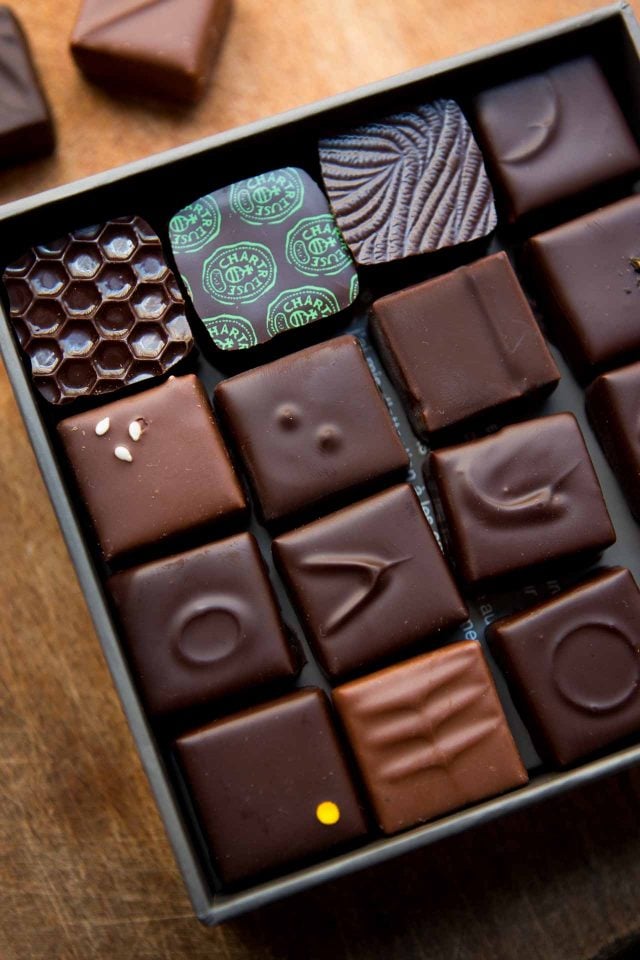 A couple of weeks ago, I took a trip to the Savoie, a region of France that was once a dukedom of Italy. As you travel through France, especially away from the center of the country, you see more influences from neighboring countries, such as in the Basque region, where cornmeal and chile peppers figure into the cuisine. In Nice, pistou and socca from Italy are laced in soups, and are local snacks, respectively. And in the Savoie (Savoy), there’s vermouth, polenta, and cheese-filled ravioli, known as ravioles du Royans. 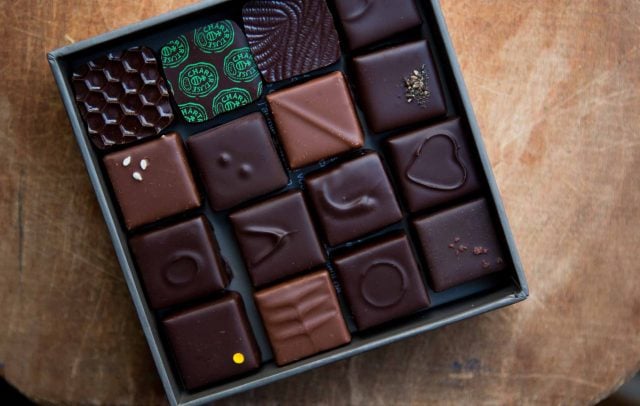 But the most legendary product from the region is Chartreuse, the powerful, complex green liqueur that’s been made by monks in the mountains for over four hundred years. No one knows quite what’s in it, but I needed to make a pilgrimage back to the distillery, which I had first visited over twenty years ago.

You can’t visit the actual distillery anymore, but you check out the aging cellars, the tasting room, and – of course – the all-important gift shop. 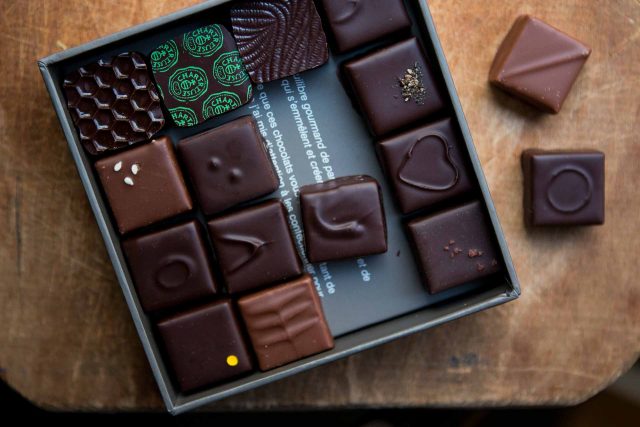 One thing about France, when you travel around, you found out how nice people are. We went to a cheese shop and when we asked for local restaurant suggestions, the two women not only wrote down several places for us to try, they offered to accompany us, too.

At the gift shop adjacent to the spectacular Grand Chartreuse monastery, while stocking up on more liqueur, I noticed a box of chocolates that aroused my curiosity: Essendoles à la Chartreuse Verte. I was familiar with the liqueur-filled chocolates made by another local chocolatier, but these were different, the clerk told us, made by Sandrine Chappaz. 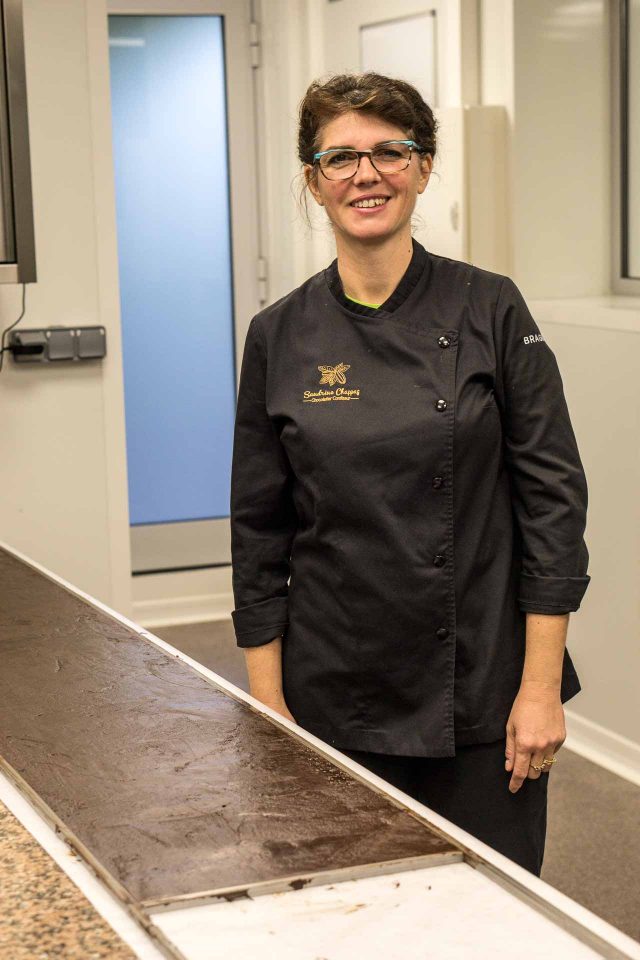 It was late in the day as we’d be touring and drinking, and I was starting to wane. The day started with a Chartreuse tasting, which is pretty strong stuff (you definitely don’t spit it out when you taste Chartreuse), but when the woman at the register offered to call the chocolatier and arrange for a visit, I didn’t want to say no. I rallied to the cause, for French chocolate.

So we drove out to her house, or I should say, her laboratoire, which Sandrine built next to her home, and her lush garden, where she culls the herbs she uses in her chocolates and confections. 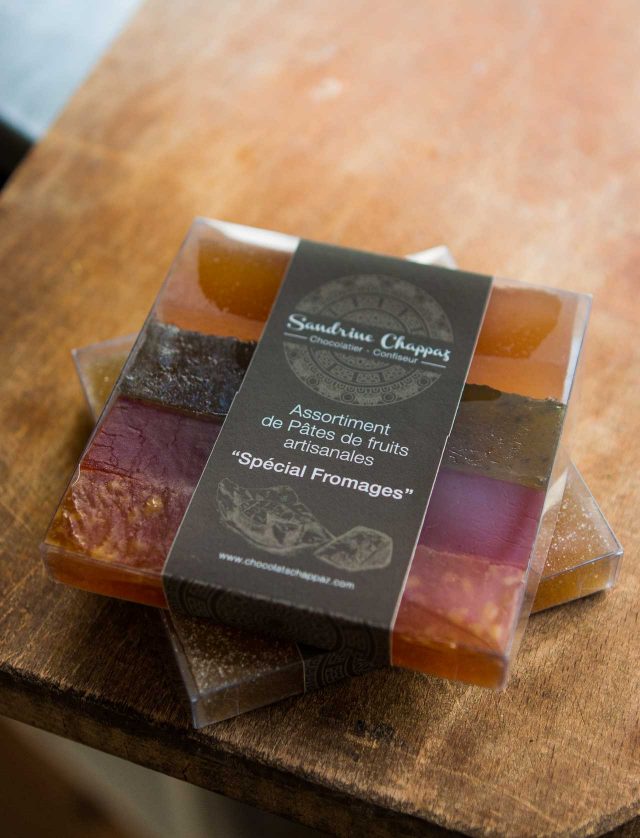 The pâtes de fruits “Special Fromages” were some of the most inventive and interesting I’ve ever had. They’re so special that she makes them for The Ritz hotel in Paris, in apostrophe-like shapes. They were the first thing we tasted, each made with most local herbs one could imagine: She pointed to the bushes just outside the window, to prove her point. 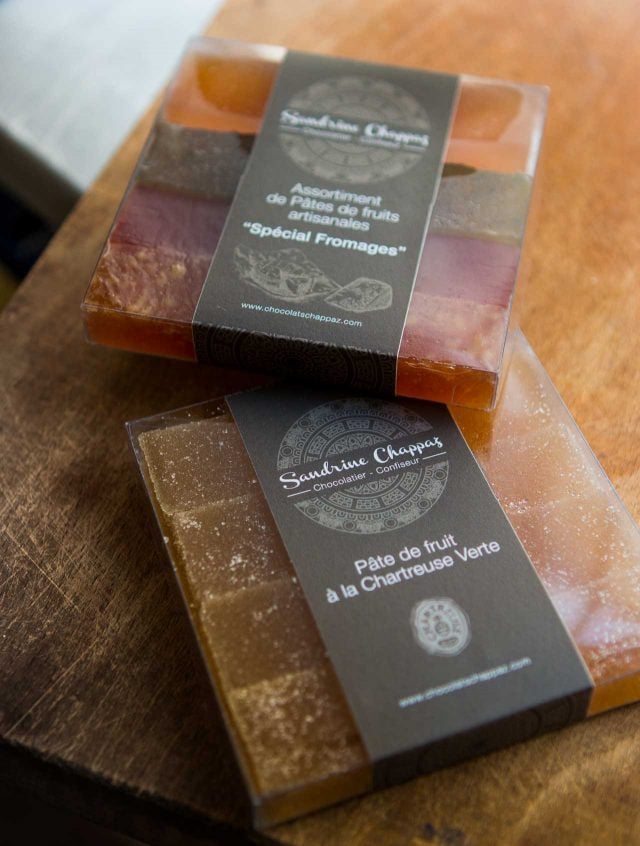 The fruit-and-herb jellies are meant to go with cheese. (Which we had a whole bag of, after spending thirty minutes in a cheese shop the day before.) One was flavored with apples and savory, another with red peppers and pimente d’Espelette, which would be nice with a smoked cheese or a firm sheeps’ milk Basque cheese. Pear-lavender is recommended to pair with blue cheese by Chef Chappaz, and peach and walnut, using the famed local walnuts from Grenoble, are meant to go with Gruyère, Beaufort, or Comté. 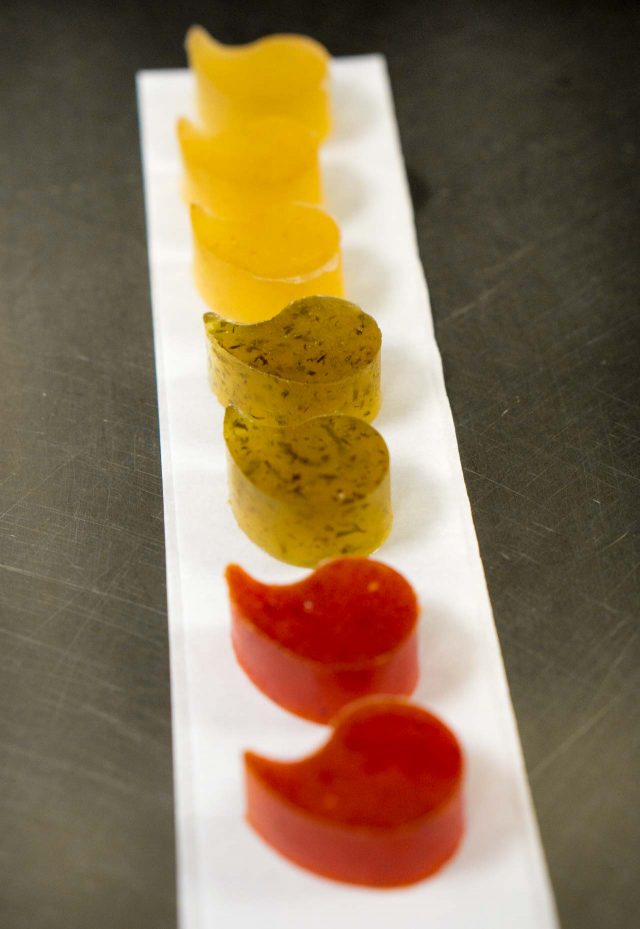 Of course, there are green Chartreuse jellies as well, which would be perfect after dinner or alongside a cup of hot chocolate. And marshmallows, if you’re the kind of person that likes to float one in a cup of chocolat chaud. Like I am. 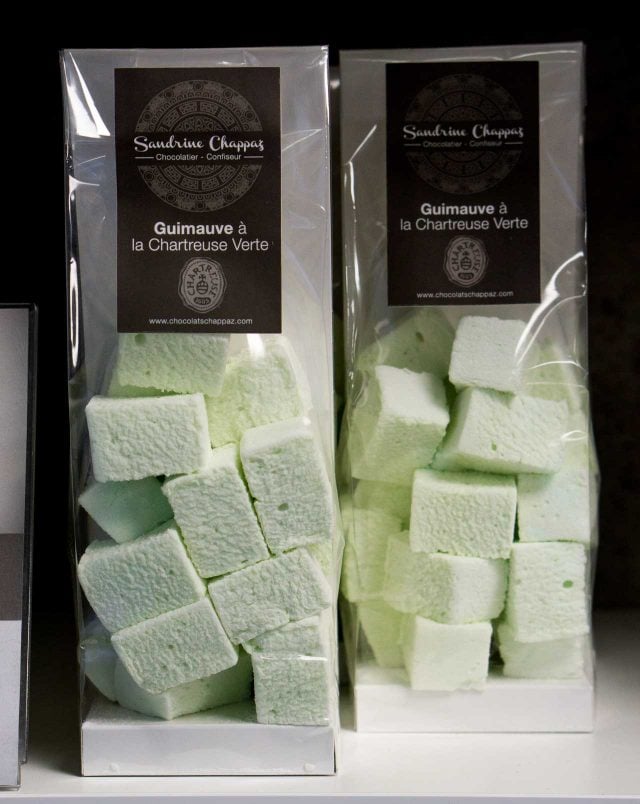 When I saw all the marshmallows in her shop, we both got a little glassy-eyed, and Sandrine and I may have said in unison, “J’adore les guimauves!”  agreeing that marshmallows rule the candy world. 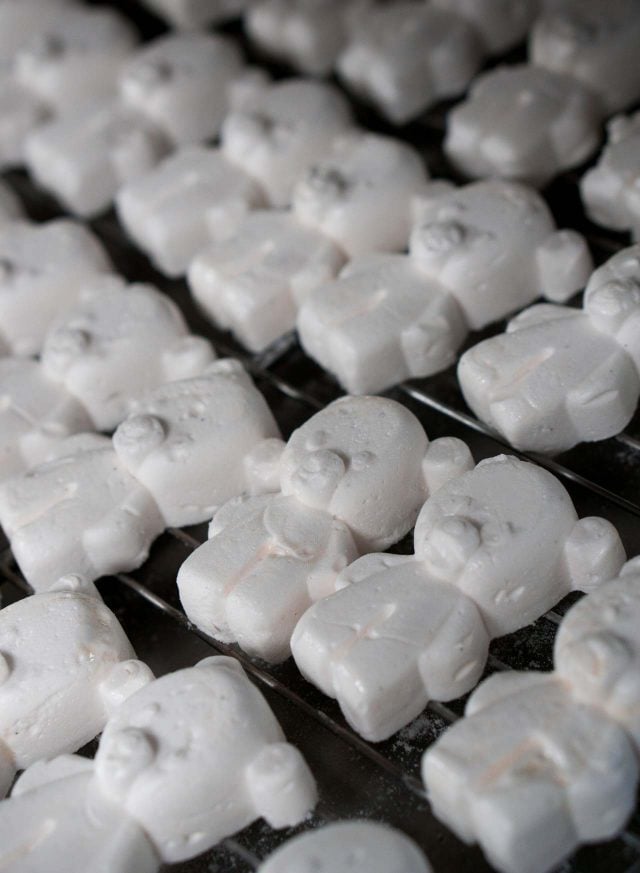 Even more fun was the marshmallow teddy bears, a wink at Oursons guimauve, beloved by the French, and sold in supermarkets. They’re meant for kids, but…well, I can’t resist them either. If I lived closer to Sandrine’s workshop (which is open to the public), I’d be a regular customer. Perhaps it’s better I don’t, because a couple of days after we got home, Romain asked me what happened to all the chocolate-covered marshmallow bears, and, as in the words of George Washington, I cannot tell a lie… 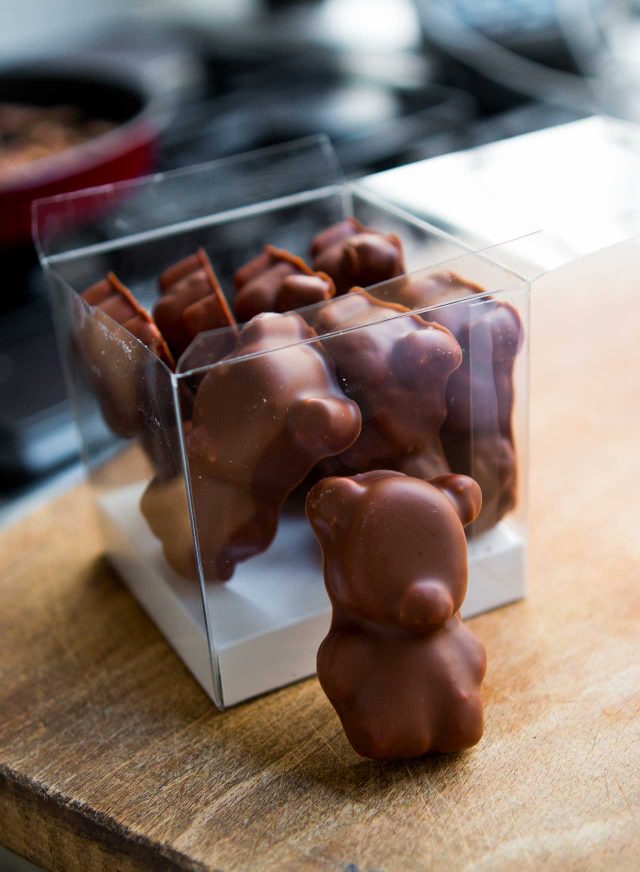 At our stop at the local fromagerie, I wanted to pick up some of the famous cheeses that are made in the alps. Unlike elsewhere, and in spite of globalization, there’s still a sense of regionality in France, and some things just aren’t shipped to Paris, or elsewhere; they remain in the region. You have to go there to experience them.

One was a cheese with Chartreuse*. It’s made by La Ferme de Platimay. (The label is on my Instagram page.) I didn’t know that Sandrine Chappaz made the thin disk of Chartreuse inside, a wafer-thin jelly that gets inserted into the cheese while it’s being made. 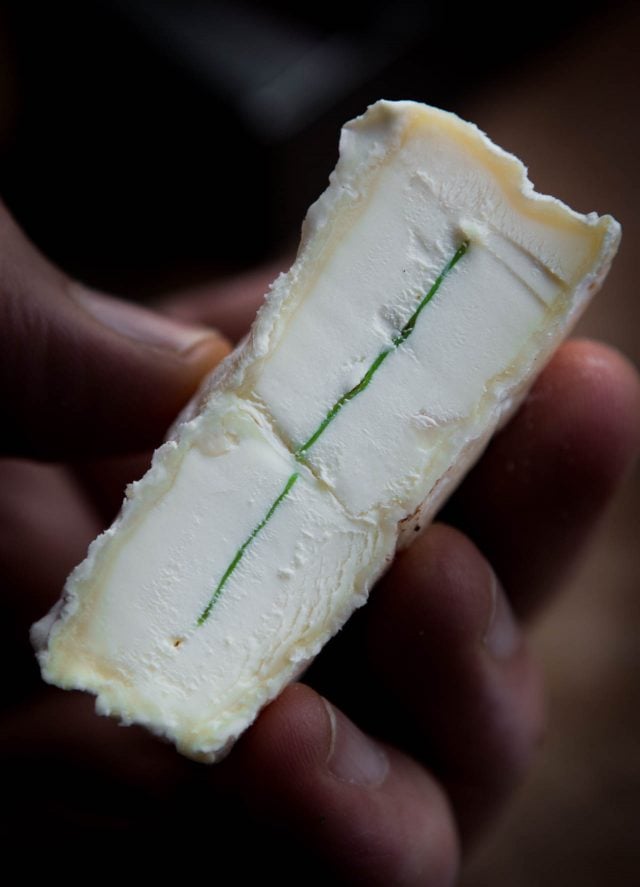 I like cheese, and I like Chartreuse, and although I appreciated the effort, the combination may be best left on a plate (the cheese), with a glass of Chartreuse on the side. But before I knew she’d made the thin layer of jelly inside, she asked what I thought of it.

In the “Open mouth, insert foot” category, I said that it tasted a little funny to me. She tilted her head curiously, then said, “Oh, I make those.” I was a little red in the face, but on the other hand, as I always say, don’t ask a question that you don’t want to know the answer to.

But she had just made the jelly for the inside and didn’t make the whole she-bang so let’s blame the cows. That Chartreuse jelly, however, went to good use in the Essendoles à la Chartreuse Verte. 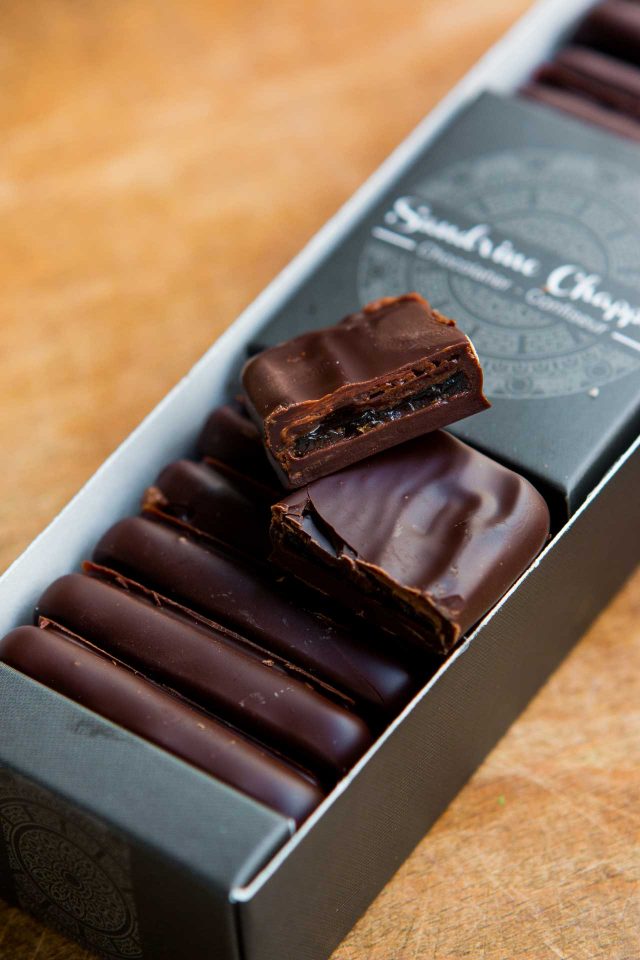 I had to look up what an essendole is, and it stumped my French dictionary – and my French partner. I did a quick search online and the only thing that turned up were gites (inns), but I do know one thing…

…these chocolate rectangles were incredible. Each shingle was filled with a layer of powerful green Chartreuse jelly enrobed in bittersweet chocolate. Wow, those were amazing and I was glad I picked up a box, but it got finished a little too quickly, and I need more. (Although Romain managed to get back at me and ended up finishing them.) 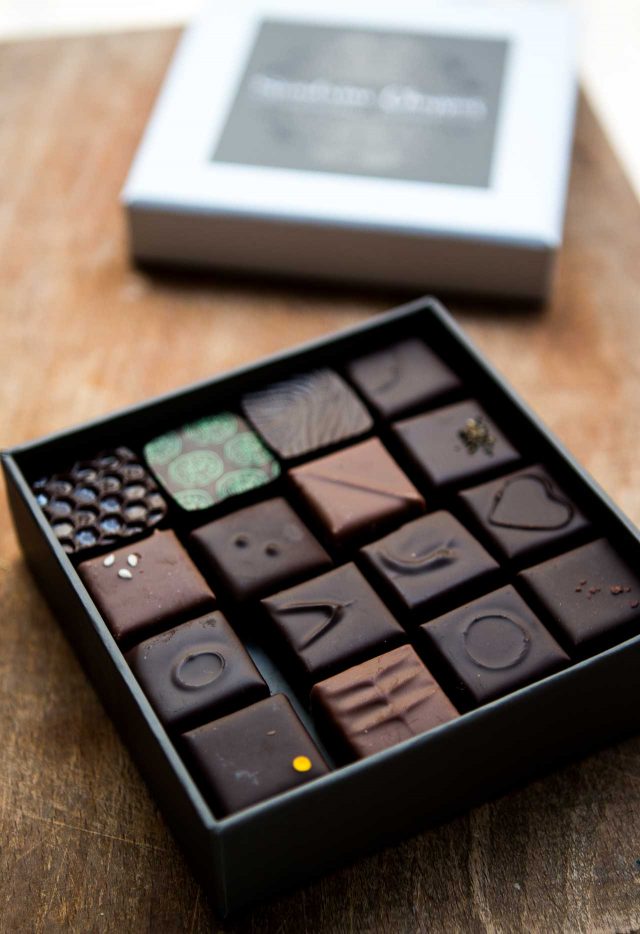 I realized I got through this post and didn’t talk much about the chocolates. (I was obsessed with those Chartreuse tiles and marshmallows.) I tasted a few chocolates in her workshop, as she was working on them, but bought a box to bring home, where they were greatly enjoyed. The most interesting flavors were green Chartreuse, salted butter caramel, fennel ganache, chestnut honey, sesame praline, and one filled with hazelnut praline, although they were all terrific.

Sandrine Chappaz chocolates are sold at her boutique and online, although she ships throughout France. (Tip: If coming to France, you can place an order and arrange to have it shipped to the address where you are staying.)

*Although I can’t confirm it, my friend Ann Mah told me she got one at Fromagerie Griffon in Paris, so they may have it, if you’re not a locavore : ) 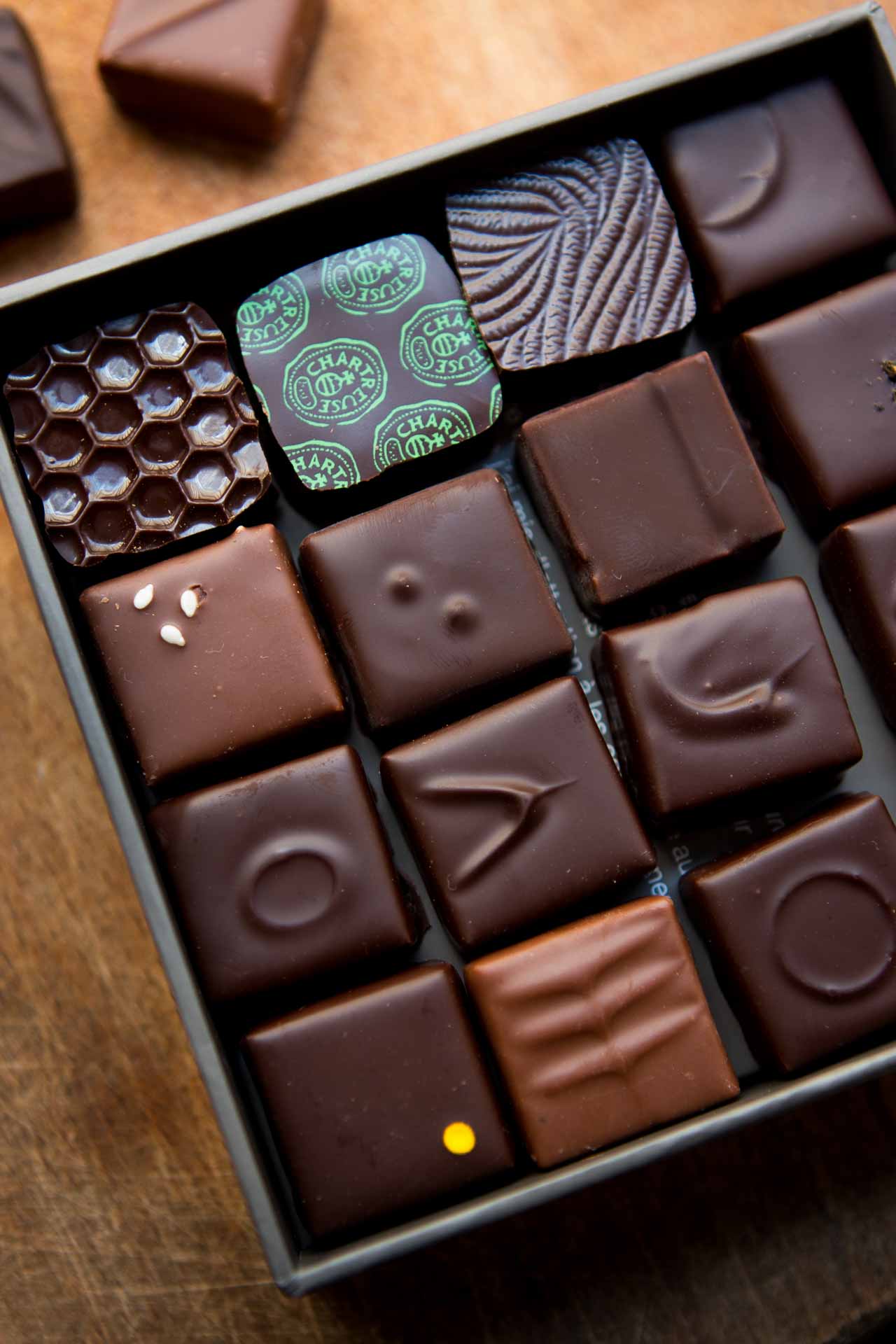