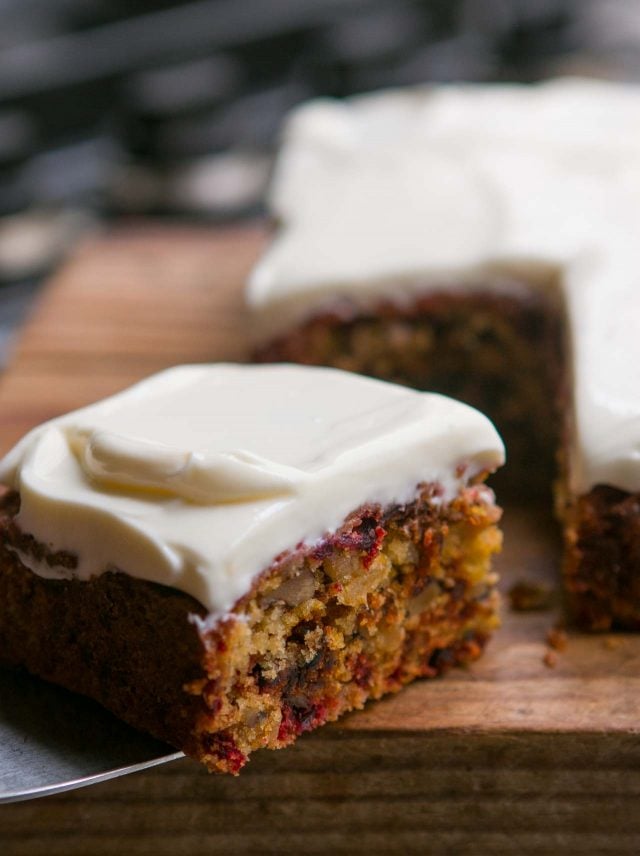 Yotam Ottolenghi seems to be everyone’s favorite cookbook author. After meeting him, he became mine, too. (But if I could stay in your top ten, that’d be appreciated.) His previous books focused on the savory side of Middle Eastern cooking, but Yotam was a pastry chef prior to being a restaurant co-owner (with Sami Tamimi) and cookbook author, and anyone who’s walked into one of his restaurants or cafés in London is wowed by the stunning cakes and sweets lined up on the counters.

This time, he shares the spotlight with Australian pastry chef Helen Goh, who met Yotam long before he became well-known, and their decade of collaborating resulted in Sweet, a baking book filled with exciting and sometimes unexpected ingredients used in brownies, cakes, and cookies. Which is why when I hit page 130, I stopped turning the pages, and headed into my kitchen. 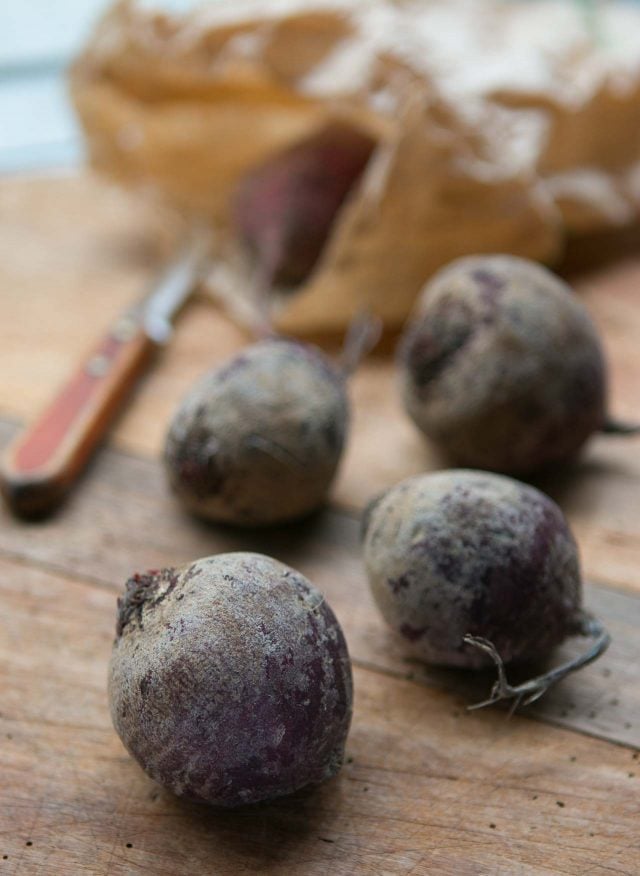 I’ve baked with beets before, when they were cloaked by chocolate, a term I may crib as a title for my final memoir, but was intrigued by combining them with candied ginger, nuts, and an especially unusual ingredient: Vitamin C.

As I gathered the ingredients for this cake, I didn’t have any vitamin C on hand but did have some Fruit Fresh, that I bought a while back for recipe testing. Its ingredients are ascorbic and citric acid, and it’s high in vitamin C, which apparently helps “set” the red color of the beets, so I cracked the lid on that, and saved a trip to the pharmacy. (Which is everybody’s favorite place in Paris, including mine.) 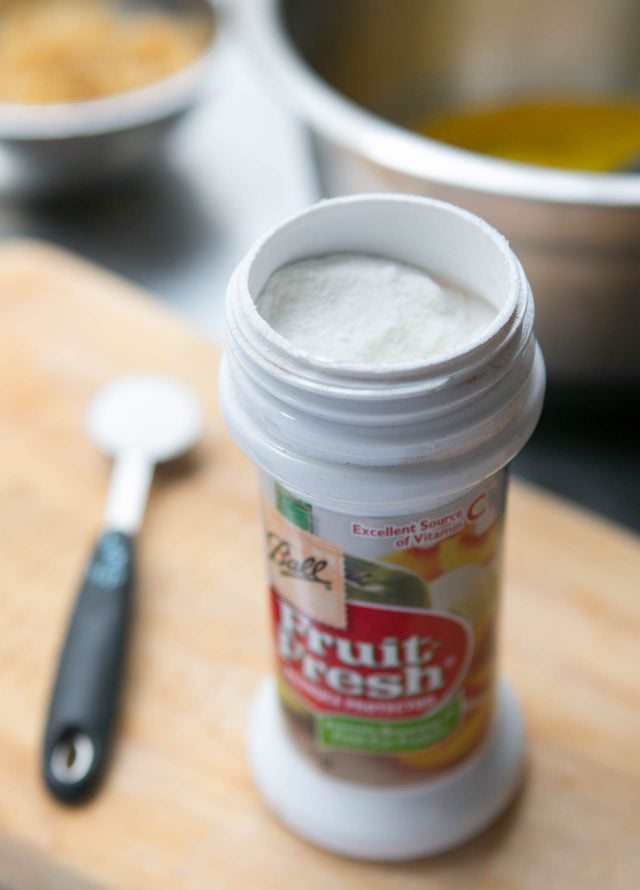 One thing I didn’t have was candied ginger. “But David, you can make your own candied ginger,” and yes, I often do. But like growing your own beets, or raising wheat and milling my own flour, if I DIY’d everything, I wouldn’t have time to make and share recipes with you, so I hiked up to Belleville and bought a few bags of it. I found that if I keep it on hand, the candied ginger gets snacked on before I get a chance to bake anything with it.

Being me, I can’t get out of any multicultural market without buying other things, coming back with ingredients that I never heard of. And I have a drawer in my kitchen filled with everything, from ginger-infused brown sugar, to sticky, dark coconut syrup, to prove it. (In my defense – how could I pass those up?) 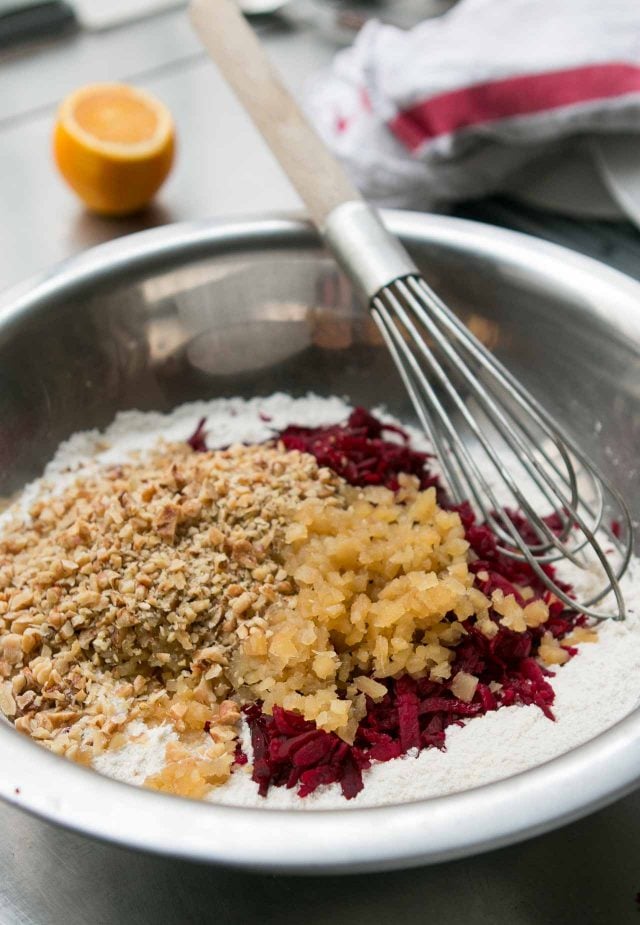 I managed to get out of the store this time around without overloading my bags too much, but was happy they also had pâte à tartiner (cream cheese) and fromage frais, which is similar to sour cream in texture, and tang, which the frosting called for. 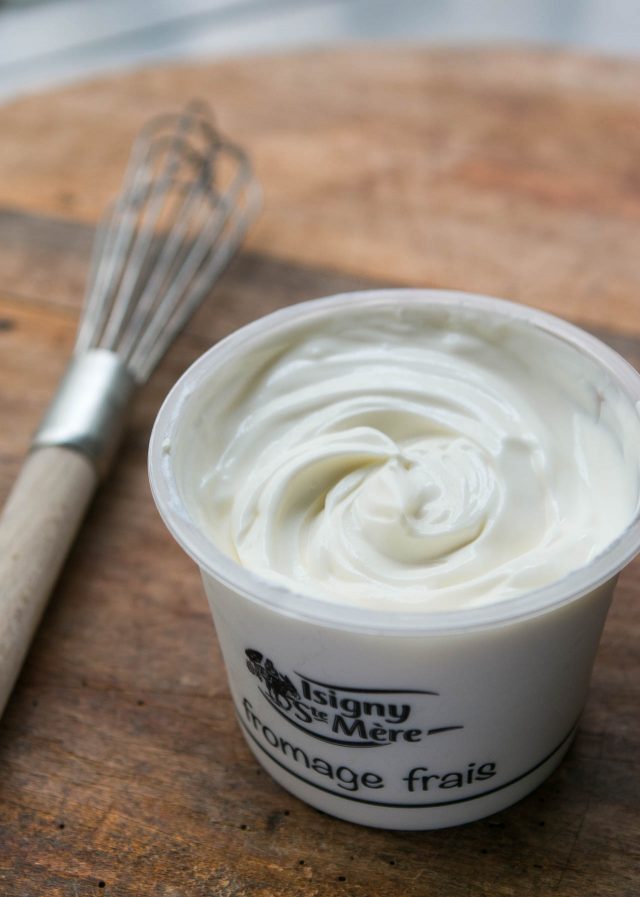 One doesn’t use the word “astonish” when describing cake batter very often – if ever, but when I was mixing it all together, it was, astonishing. The addition of vitamin C really did help set the color of the beets, as Yotam and Helen promised, and I was looking forward to seeing how the batter would bake up. 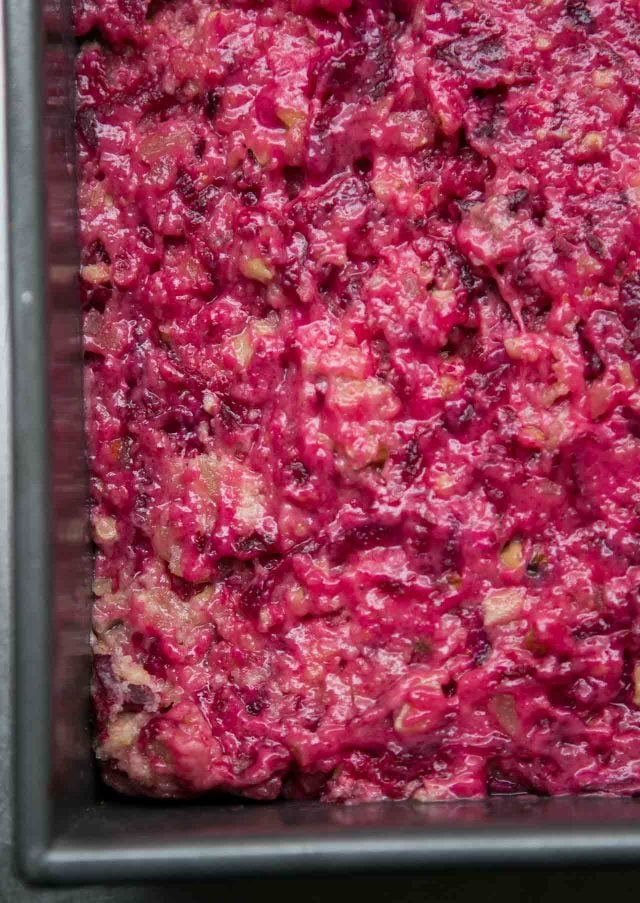 Turns out, the color mellowed to a more subdued rosy hue after some time in the oven, but the bits of red beets remained bright in the nutty batter, with little nubbins of ginger adding bits of excitement. I loved it. 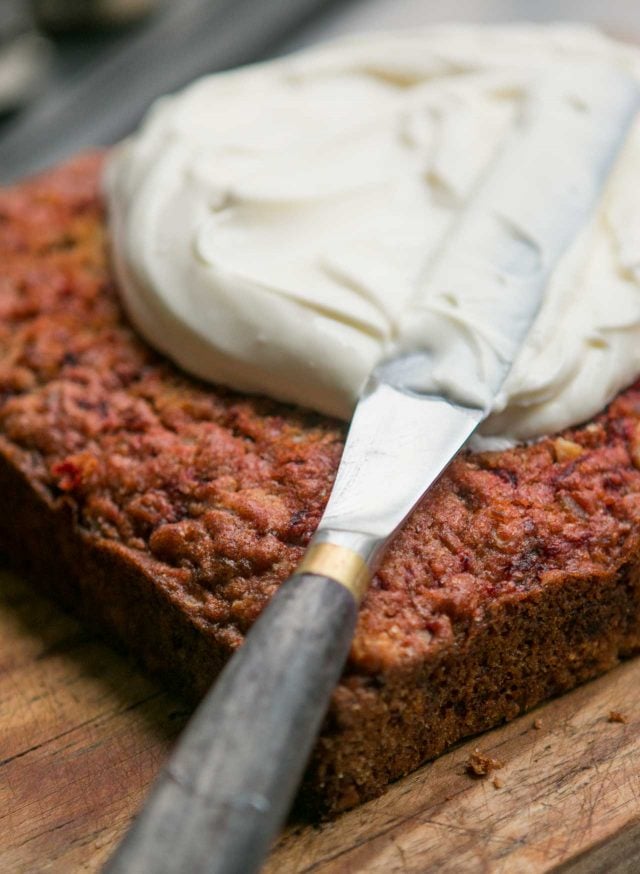 This cake is decidedly on the less-sweet side, which is fine with me. If an American baker had created it, it would likely have some spices added, as we’re especially fond of cinnamon, etc. But I didn’t miss them at all. And as is often the case with desserts frosted with cream cheese, you could almost say that was the best part. 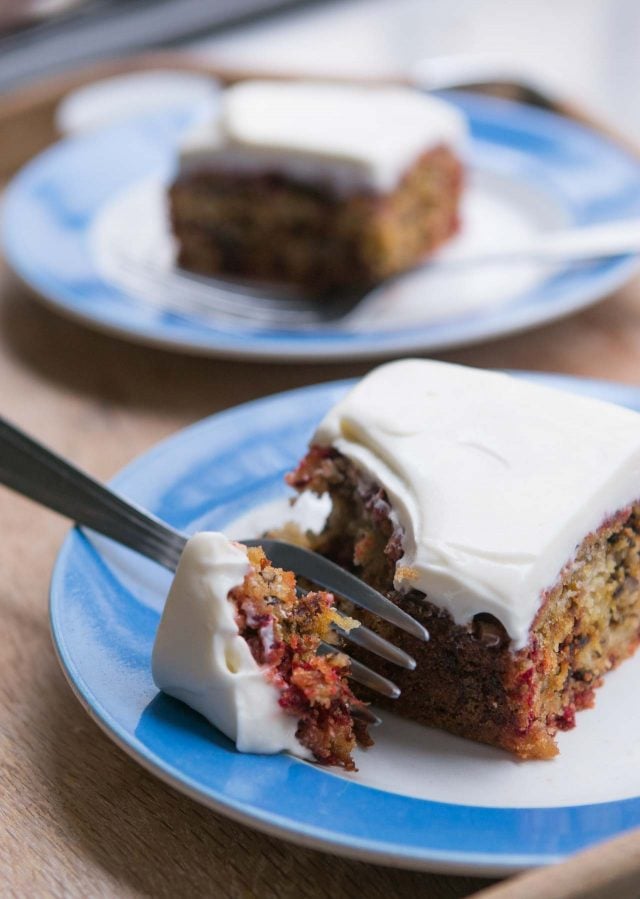 The two worked perfectly together well, and I don’t mean just the cake and the frosting, but Yotam and Helen, and I’ve got a few other recipes from Sweet bookmarked…once I’ve polished off this cake. 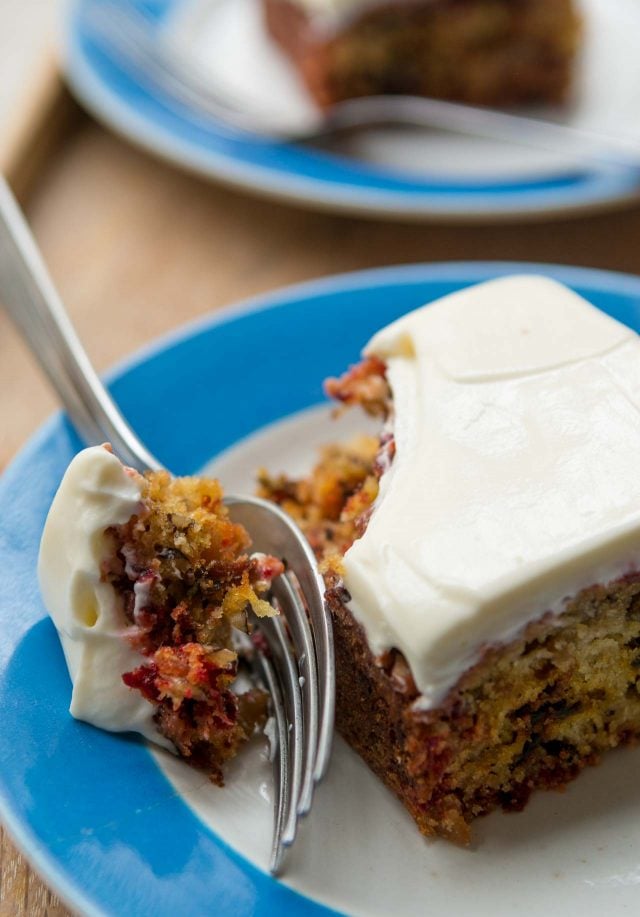 Adapted from Sweet by Yotam Ottolenghi and Helen Goh Although I liked the cake just fine without it, a little ground cinnamon or allspice in the cake batter would be welcome, for those who like spices. The original recipe had some fresh ginger juice added to the cream cheese frosting, but I didn't think it was necessary; it was so good on its own. The candied ginger in the cake gave it enough bite. The recipe also called for an 8-inch/20cm round cake pan, which I didn't have in that size, so I used a square cake pan, which worked well. For more on alternatives to certain ingredients (sour cream and cream cheese, for example), check out my post, Ingredients for American Baking in Paris, which may be relevant if you live somewhere where those ingredients might not be available.
Servings 9 servings

For the beet and ginger cake

For the cream cheese frosting

Storage: The cake will keep for up to 3 days. If not eaten the same day, it's best stored in the refrigerator, although let it come to room temperature before serving, if you can.

How to Tell if Baking Powder is Still Good