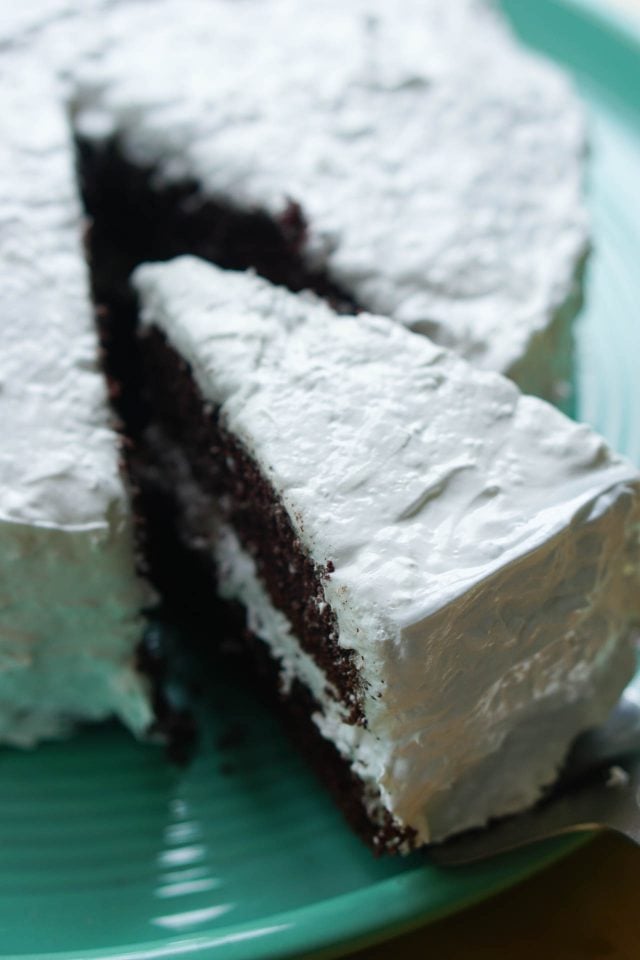 When I was a kid and we went trick-or-treating for Halloween, we’re run around the neighborhood, collecting candy from various houses, filling our bags with candy bars, sour bites, an occasional apple (ugh!, for a kid…), and assorted other goodies. Once home, we’d spill our loot onto the floor and commence with some serious trading.

The ne plus ultra of candies to get were coconut-chocolate bars, namely Mounds and Almond Joy. Those never got traded, at least for me. You could keep your beige-filled nougat bars coated with sweet milk chocolate, black licorice, and anything jellied and green, I was happy to trade away.

It was hard (for me) to part with anything that had peanuts in it, but were as precious to me as coconut bars dipped in dark chocolate. The tropical flavor of the juicy coconut, whose shreds scrunched pleasingly between my teeth, enrobed in bittersweet chocolate (and yes, it came in two pieces, which was like getting two-fer) was my bonus for a job well done. And I deserved it. 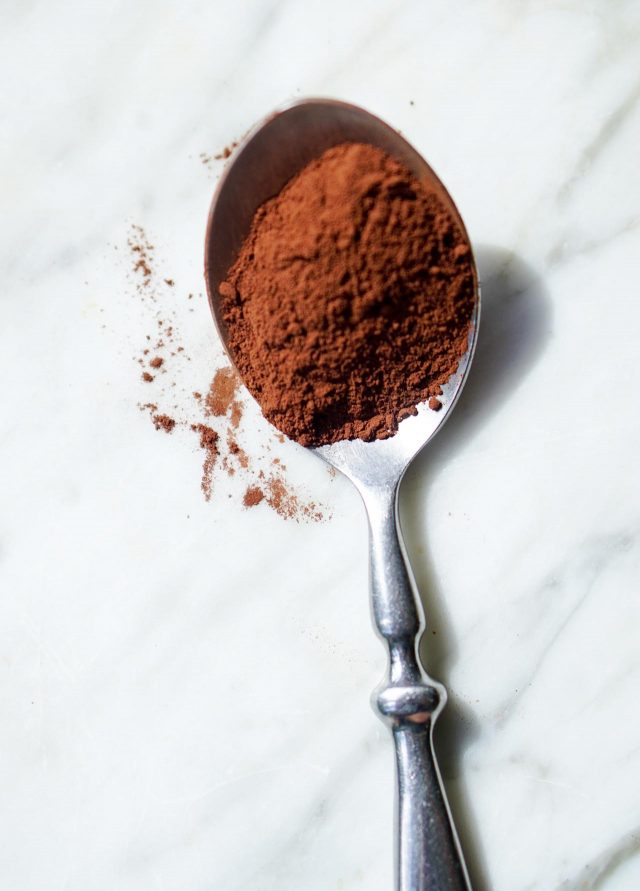 So I was thrilled when I was flipping through Steak and Cake: More Than 100 Recipes to Make Any Meal a Smash Hit by Elizabeth Karmel and spotted a cake that brought back those flavors to me. Elizabeth’s book celebrates her two favorite foods: Steak and cake. One of my recipes is included in the book, but I was especially intrigued by this one, with a billowy marshmallow frosting. Who knew that three egg whites could become a gloriously fluffy mound of silky marshmallow goodness? And who knew that you could ice a cake with it? That required some investigating… 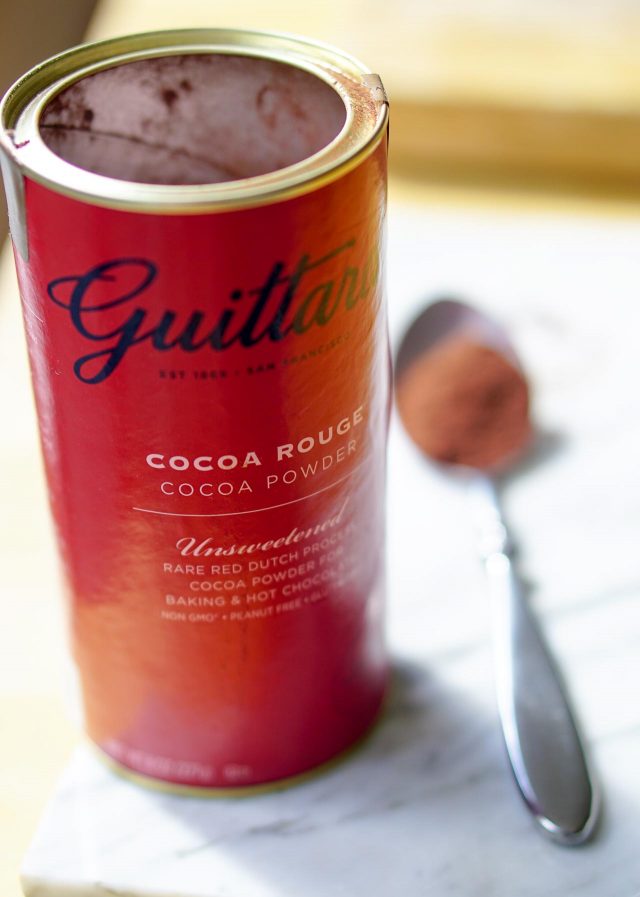 This cake is dubbed “candy bar cake” as it’s meant to recreate my favorite chocolate-coconut combo bars. (Planter’s Peanut Bars, with their enticing mix of caramel, peanuts, and salt were a close competitor for that spot.)

The cake gets its intense chocolate flavor from cocoa powder. Like many classic American cakes, natural cocoa powder is called for, the kind you get at the supermarket. It’s not available elsewhere in the world, where almost all cocoa powders are “Dutched,” a process of neutralizing the acid in the cocoa, that darkens it and makes it more compatible with baking powder, rather than the more acidic baking soda. However when I asked food science writer Harold McGee about that, he sort of hemmed and hawed before speculating that when you add eggs to the batter, the pH is neutralized, and all bets are off. 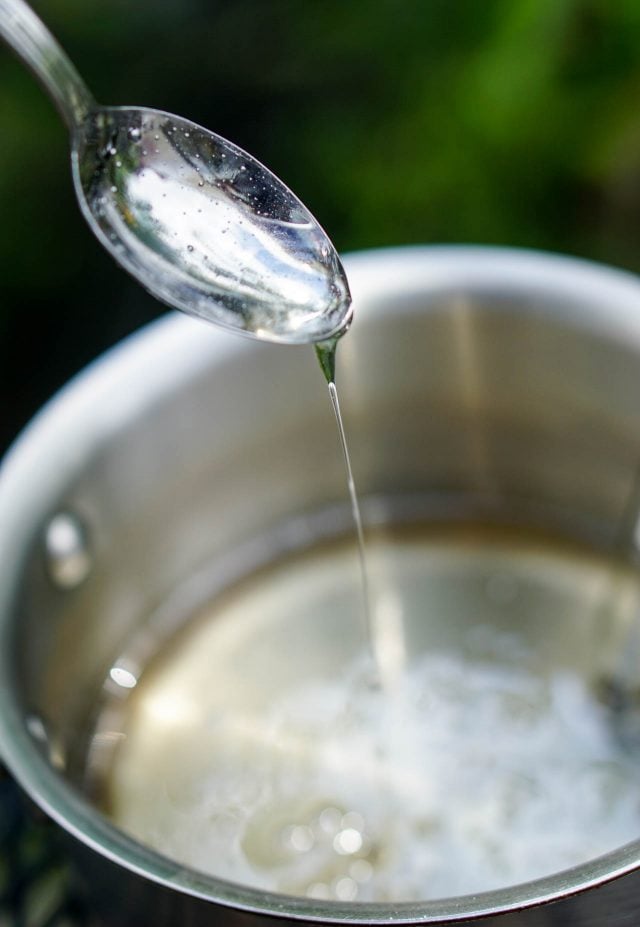 I made a few other modifications to the recipe, and it worked like a dream. A soft, creamy, creamy, marshmallow-frosted dream. 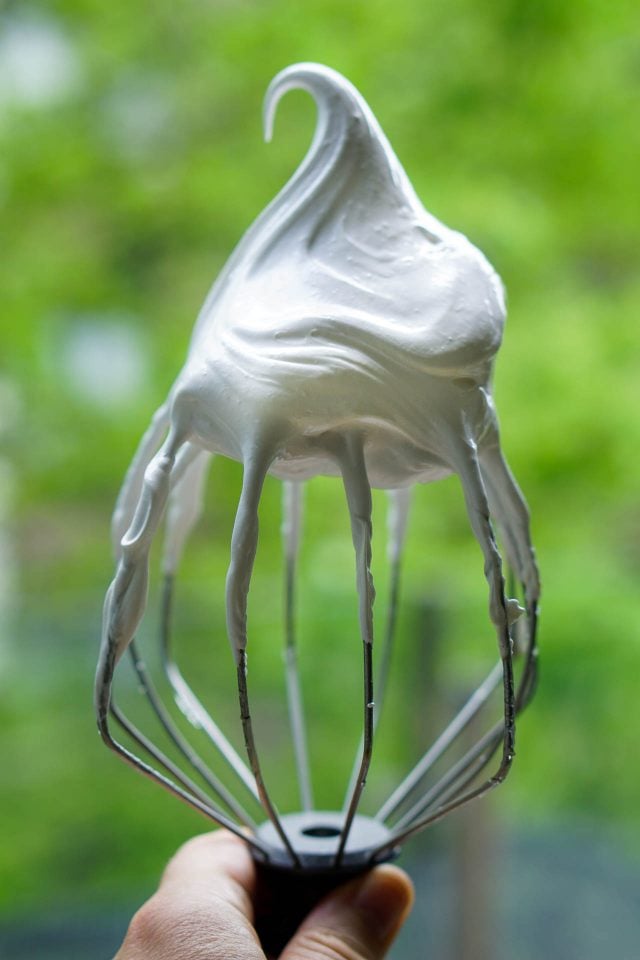 Let’s get this out of the way before we go any further: I’m not a cake decorator. I spent my life baking and cooking in restaurants that were flavor- and ingredient-driven, so while I peel the most beautiful apples and make (what I think) is pretty good ice cream and cookies, my layered cake decorating skills are rudimentary, at best. There’s also a tendance to make ultra-high layer cakes, which require more than two cake pans, and lots of garnishes, embellishments, fancy cake stands, chocolate dripping down the side, and even flowers.

As a baker, I was always ingredient- and flavor-driven,  so I never spent a lot of time decorating. It’s not in my skill set as it is with others, which I’ll leave to them. Instead, this cake is just fine as it is, with a couple of swipes of frosting. (With a few for the decorator to lick!) 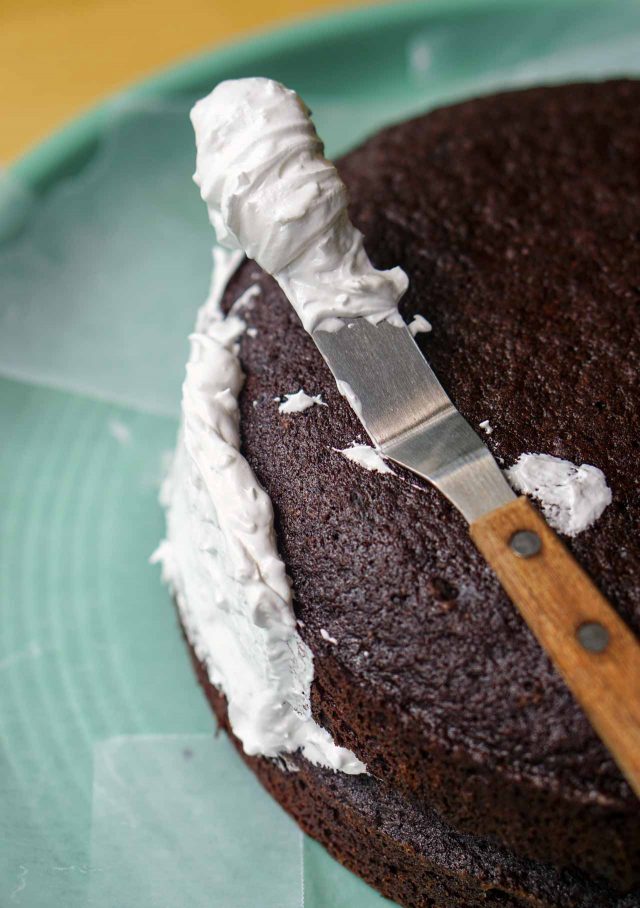 Seeing as I had all the ingredients on hand to make this cake, I was ready to go. One newer addition to my baking arsenal, however, is a round silicone cake pan liner. 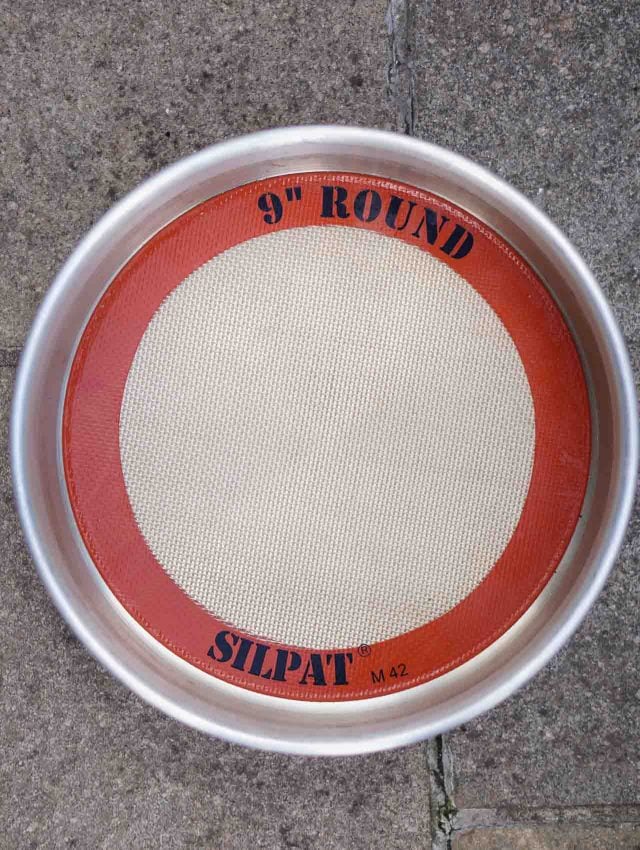 One of my least-favorite baking tasks is cutting parchment circles to line cake pans. Yes, I’ve seen those packages of pre-cut ones, but I’ve always been too cheap to spring for them. (I am my mother’s son, after all.) So I was excited when I saw a prototype for these silicone cake pan liners a couple of years back. When they finally started production of them, they sent me one. How could they not? I was going crazy, which possibly I exaggerated a little when I saw the prototype at a baking trade show, and may have even forced out a few tears when I saw it, just for extra effect. But it worked. 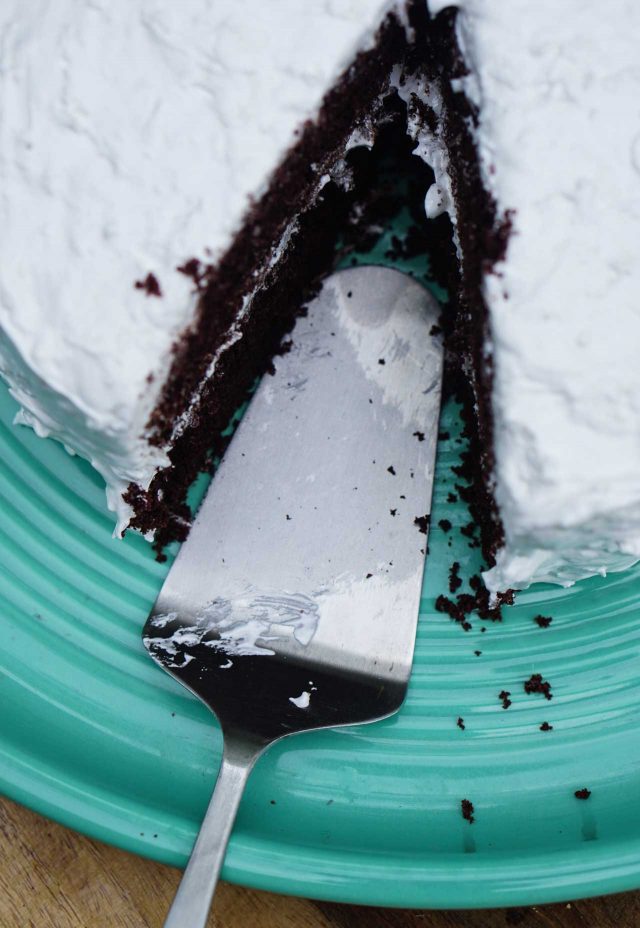 Since I had to bake the cake in two cake pans, I tried one cake following Elizabeth’s instructions of spraying the cake pan with non-stick spray, and leaving it at that, and another with the silicone mat. Both released well, so you can use whatever. 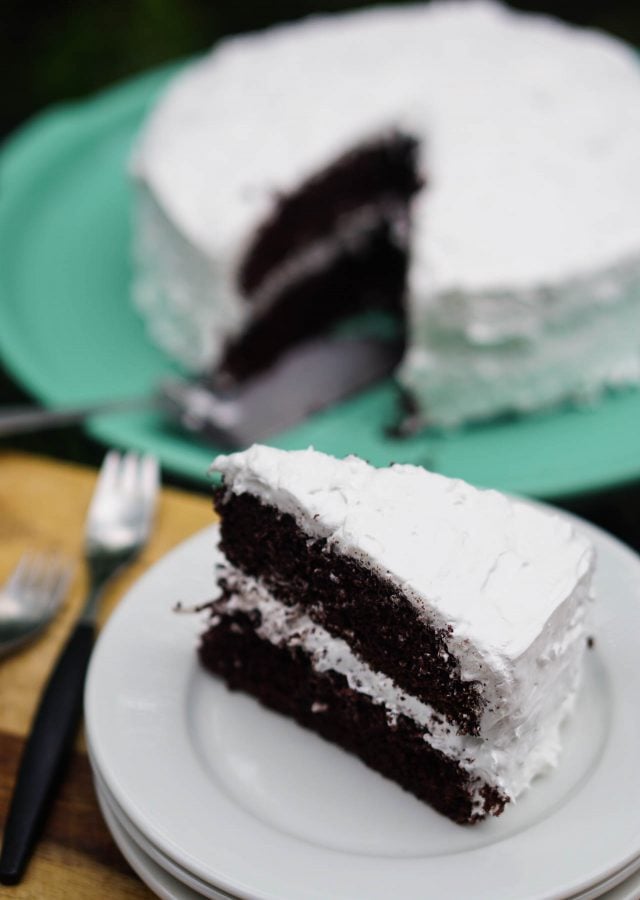 When all was said and done, when the cake layers were both released, the frosting was whipped to perfection (and yes, three egg whites makes a whole bowlful of frosting), I stacked the cake up on a cake plate, and finished it.

Some coconut cakes use whipped cream for the frosting, which I’m down with, but the marshmallow-like coating took this cake over the top and I’ll admit that I could not stop eating it right after I made it. I eventually did, of course, but I went back the next morning, for more.

Adapted from Steak and Cake: More than 100 Recipes to Makes Any Meal a Smash Hit by Elizabeth Karmel I made some tweaks to the original recipe, which called for natural cocoa powder. I used Dutched-process and it turned out fine. (You can read more on the subject at my Cocoa Powder FAQs.) I also didn't use cake flour, because I didn't have it, but if you want to use that, you can substitute 2 1/4 cups of cake flour for the all-purpose flour, and increase the milk to 1 1/3 cups, which were in the original recipe. Sweetened shredded coconut gives this cake its "candy bar" flavor, but you can use freshly grated or unsweetened shredded or grated coconut. Try to find one that's coarsely shredded or grated, for textural appeal and character.
Servings 12 servings

To make the cake layers

To make the frosting 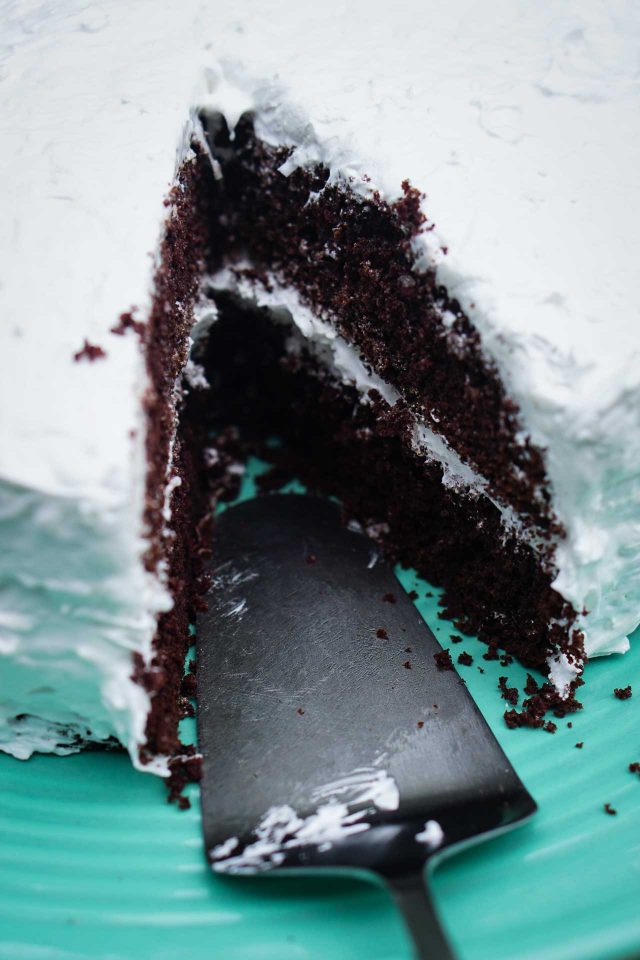