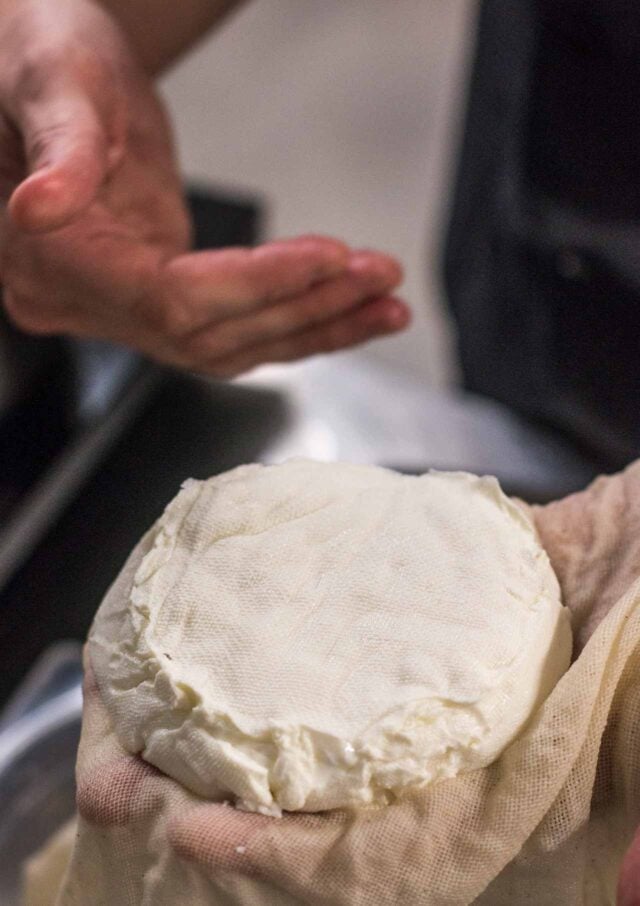 There’s nothing wrong with being a tourist. In fact, one of my favorite things to do in Paris is to “play tourist,” which means you get to do something fun around town rather than live like a local and stay home and do paperwork. The stars aligned when my friend Jane from La Cuisine cooking school and I both wanted to take a cheesemaking class at Paroles de Fromagers in Paris. I’ve been to a number of cheesemaking caves around France, but never one in Paris. So we signed up.

Unlike a lot of other cheese shops in Paris, Paroles de Fromagers don’t have shelves and shelves overloaded with cheeses. But their carefully edited selection is impressive in its brevity, and quality, and while we waited for our prof to arrive, we marveled at the incredible cheeses behind the counter. I was especially intrigued by the Tomme à l’ail des ours, cheese flecked with an allium similar to ramps or green garlic, which makes an incredible pesto and is dynamite in fondue, which I learned about in Switzerland. But we’re weren’t there to shop – but I’ll be back! – we were there to make cheese.

Friendly co-owner Romain Ricciardi soon greeted us in his shop, then took us into their cheese cave (cellar) for a look at the various cheeses that were ripening and finishing before being offered to customers. Both Romain and owner Pierre Brisson speak English and French, and the classes are given in either language. The class in English is two hours long and includes making cheese and butter, with a cheese and wine tasting at the end. The French class is three hours with no cheese tasting, which Romain said was because French people have already tasted plenty of cheeses.

Also, locals aren’t trying to pack as much into a one-week trip as a visitor, so Romain told us the classes in English are shorter. (He didn’t mention it, but for those of us who work, no matter what language we speak, a two-hour class fits better into our day.) Since overseas tourists are trickling back into town, we were the only two that day, and our class was in a hybrid of French and English, which Romain easily glides between. 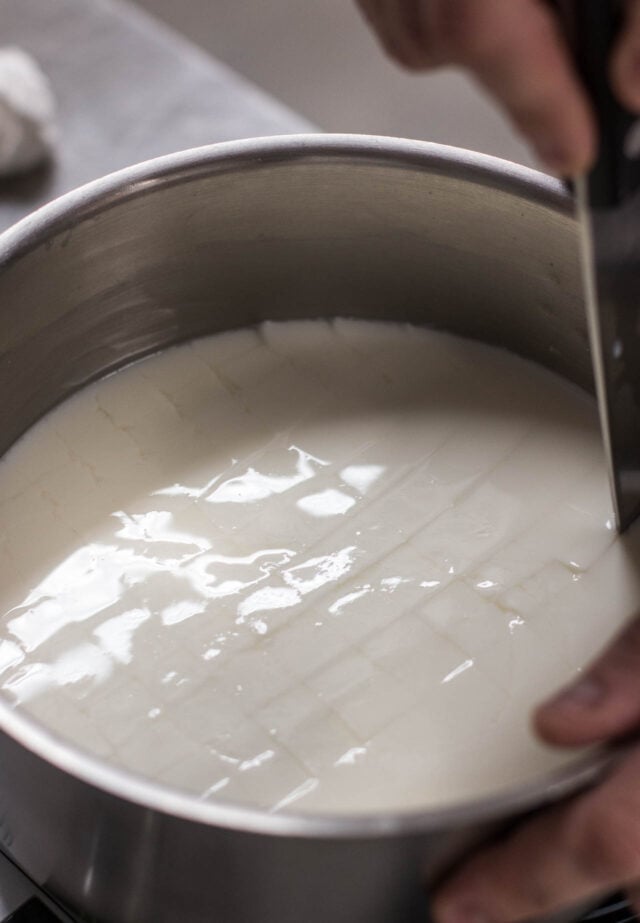 We washed our hands well and donned the traditional rubber aprons of cheesemakers, while Romain poured a jug, about a gallon (4l), of raw milk into a saucepan. He gently heated it to 38ºC/100ºF and when it reached the magic number, added a little bit of présure (rennet) and let the milk sit until it coagulated. It’s a process that mimics the invention of cheese, when people stored and transported fresh milk in sacks made of animal stomachs, and at some point – voilà – they opened them when they arrived at their destination and found that the milk inside had solidified into cheese.

While one can sort of visually tell when the milk has coagulated, Romain did a curious test, dropping a plastic cup on the top of the milk, giving it a spin before dropping it on the surface. If it kept spinning on the surface after he released it, the milk wasn’t ready. When it stopped spinning, the milk was ready to be cut. 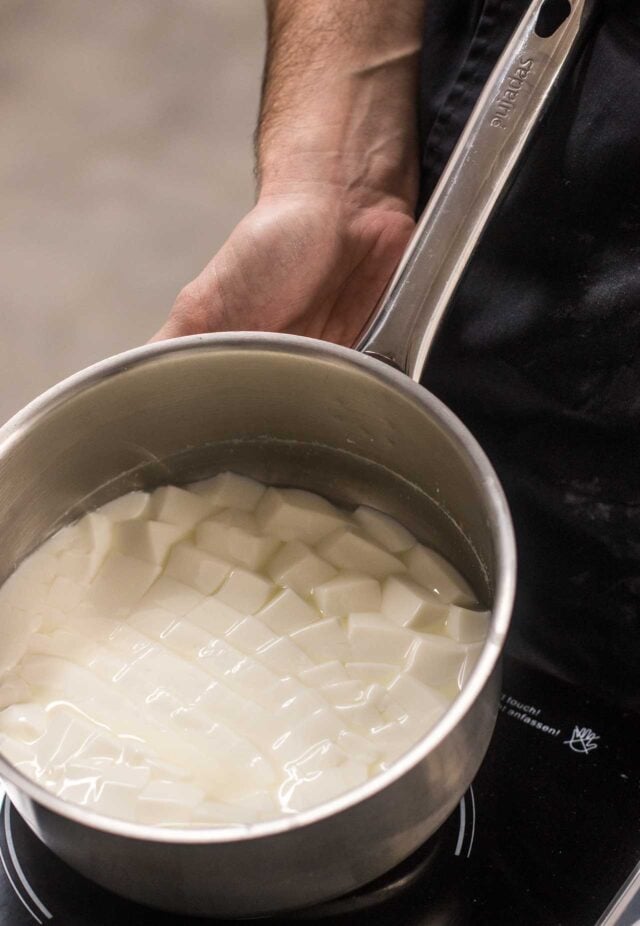 When made in larger sizes, French cheeses are sometimes called Tommes, a general name for pressed cheeses from alpine areas, such as Tomme de Savoie, Tomme de Pyrénées, Tomme des Bauges, or less-specifically, Tomme de Montagne (mountain) so perhaps one could call what we were making a petite Tomme de Paris? We were at the foot of Belleville, though, which admittedly is more of a hill than a mountain.

Most tommes are aged at least a few weeks or months, but some are aged several years. People tend to think older cheeses are better, which I did too…until I visited the caves of Comté and tasted young Comté there with the cheesemakers, which they preferred to eat as the younger, softer cheeses still had the taste of fresh milk whereas older cheeses have more concentrated flavors, and are nuttier and saltier. 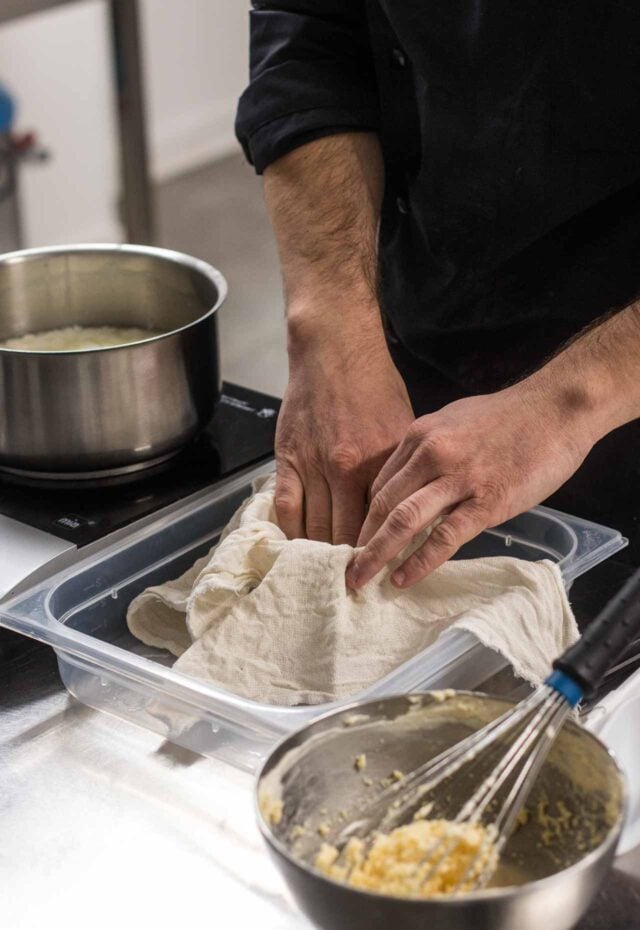 Neither younger nor older cheese is better. It comes down to personal taste. If you’ve ever tasted a 9-month-old Brie Noir, it’s crumbly with a dark brown pâte, and so highly acidic that most find the cheese unappealing…which is being kind. (If you want to live like a local and try it, which I’ve done, people in the region dip it in coffee, which tames the flavor.) Most of us prefer a younger Brie de Meaux that’s two months old, but to each their own and fortunately there are plenty of cheeses to go around.

After the milk had set Romain cut the curds into larger pieces with a chef’s knife, then let them rest for a few minutes, then cut the curds again into smaller bits. 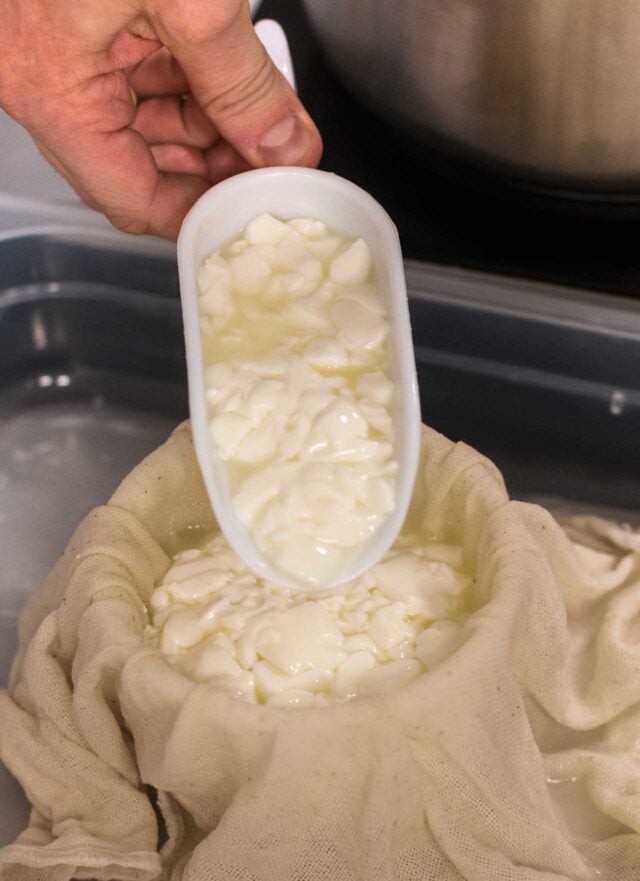 There was plenty of liquid pooling in the saucepan, but as he transferred the curds to a strainer lined with étamine (muslin cloth), he pressed the top of the mold gently to express even more of the whey out. When Jane asked what the whey could also be used for, being a cheesemaker, Romain mentioned ricotta and I remember how the cheesemaker I visited in Sicily used the whey to make fresh ricotta, which was the best ricotta I’ve ever had.

But Romain also mentioned that athletes sometimes drink the cloudy, viscous whey as it’s very high in protein. That sounded not like my cup of tea and since I’m not an athlete, I’ll stick to getting my whey via ricotta-filled cannoli. 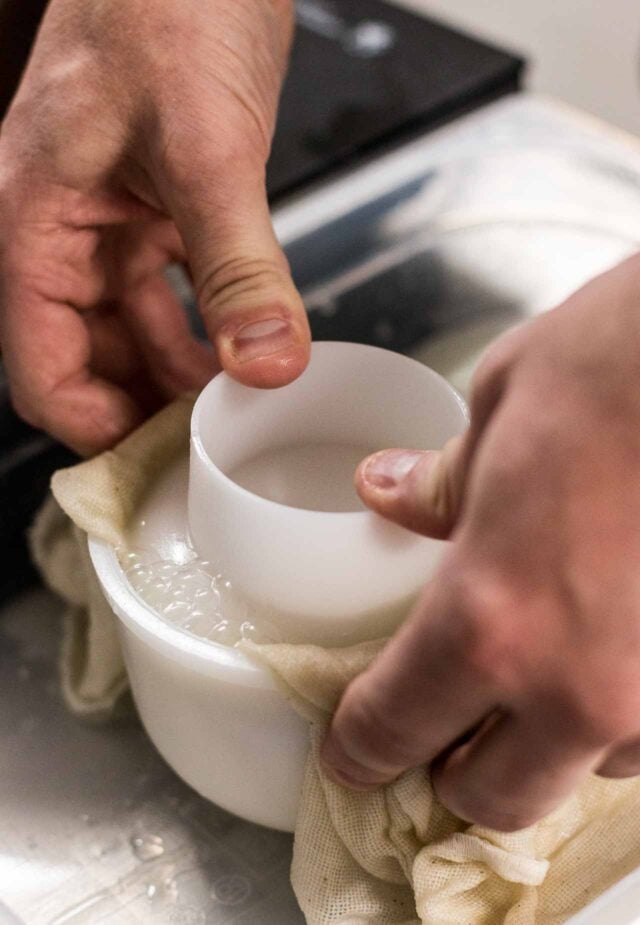 In addition to wondering what to do with the whey, in case you’ve also wondered, “Why is cheese so expensive?” the gallon jug of milk that was used went into making the one (1) small round of cheese, which eventually fit into the palm of Romain’s hand, shown at the top of this post. It wasn’t quite finished but we tasted it and it had a marvelous lactic flavor, and of course, tasted strongly of very fresh, right-from-the dairy milk. 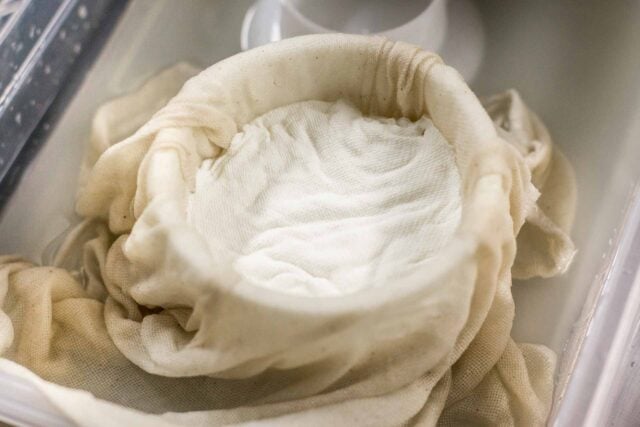 Then we moved on to butter. Most of the liquid heavy cream in France is around 30% fat, a few percentage points lower than its American counterpart. But French crème fraîche is another story and even the most hardcore dieter will succumb to the thick, creamy charms of French crème fraîche. Oddly, I couldn’t find a French word for “dieter” and my Larousse dictionary only gave a workaround with the rather wordy – personne qui suit le régime, which is a mouthful. But it’s best not to talk about diets and régimes when there’s French crème fraîche around. It’s hard to say non to. 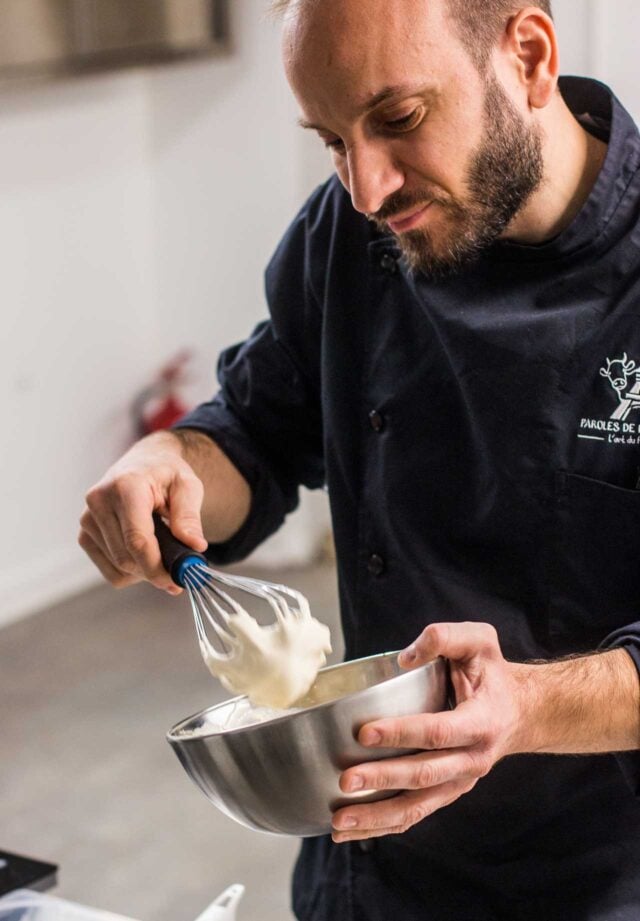 Romain scooped some crème fraîche into a bowl, which he said was around 45 to 50% fat. 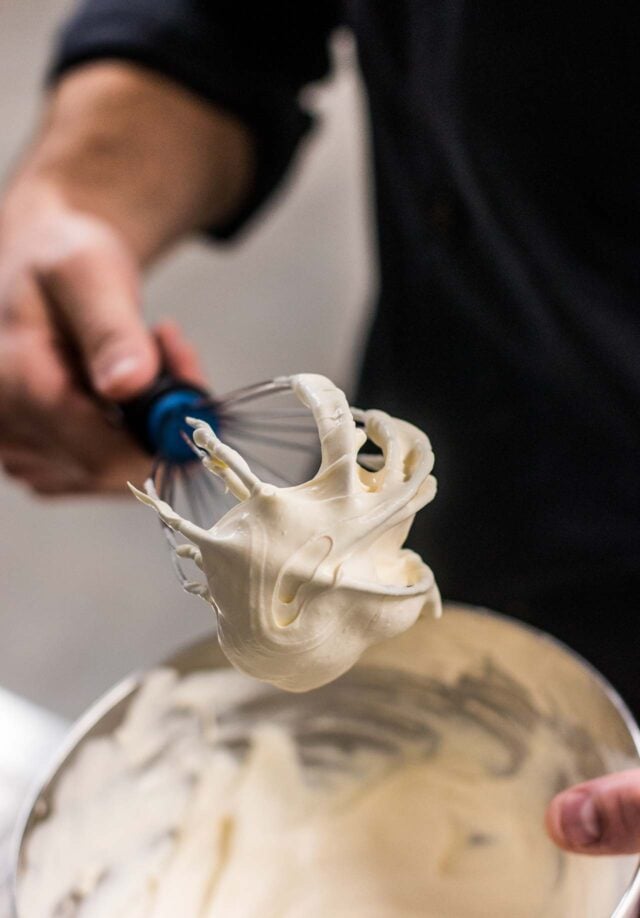 As he whipped the ivory-hued crème, the soon-to-be butter began to turn yellow, and he kept whisking… 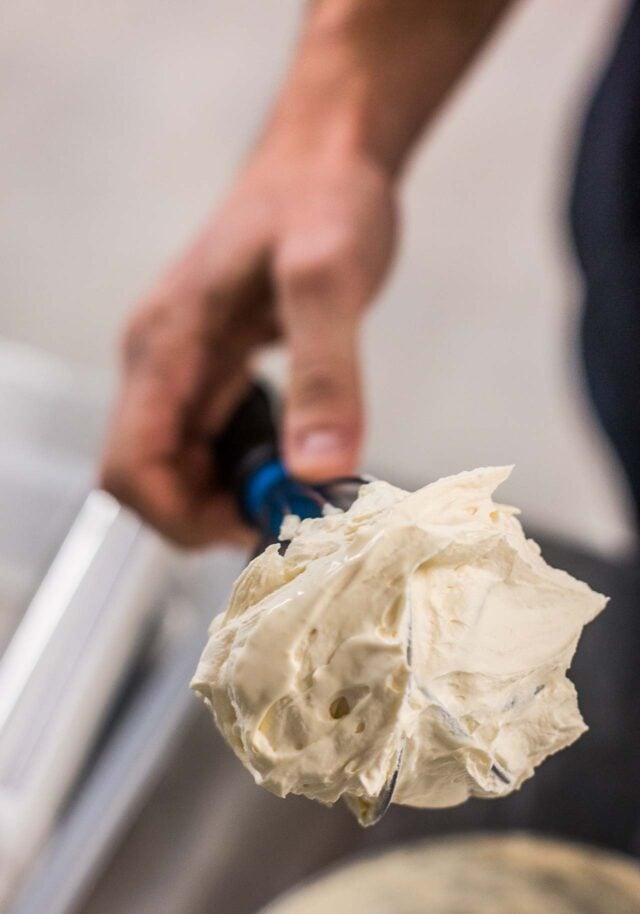 Less than 30 seconds later, the cream continued to thicken further, losing some of its luster, but making up for it by revealing larger and larger clumps of butterfat, until… 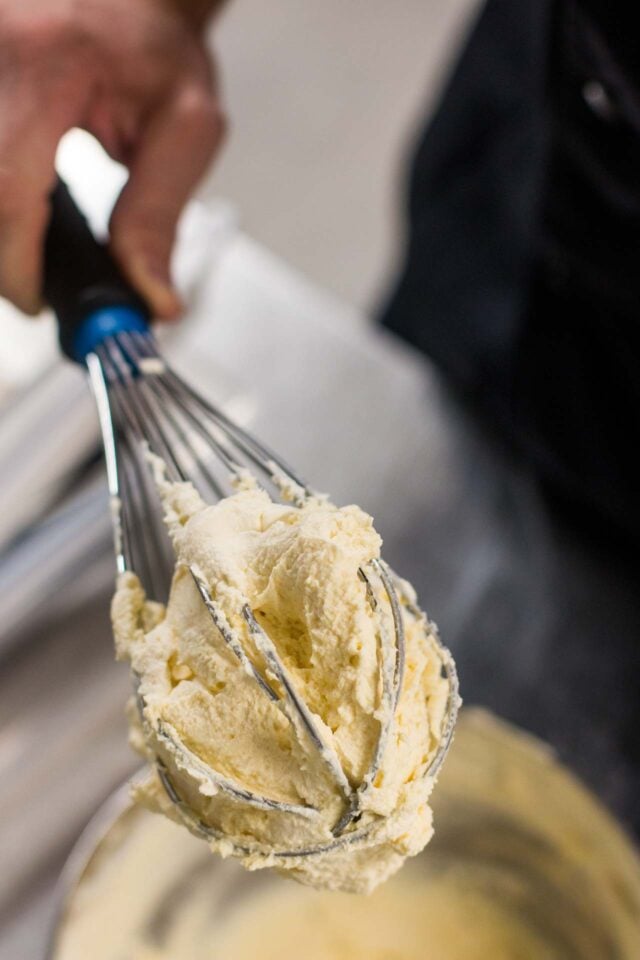 …the butter massed firmly in and around the whisk, as most of the water had been expunged, looking like a mistake that most harried professional bakers who’ve whipped a lot of whipped cream in heavy-duty mixers have seen before when they left the machine unattended on high speed to hurry things along, only to come back to a big bowl of clumpy cream. (Tip: Folding in liquid heavy cream will smooth it out, unless it’s gone too far.) 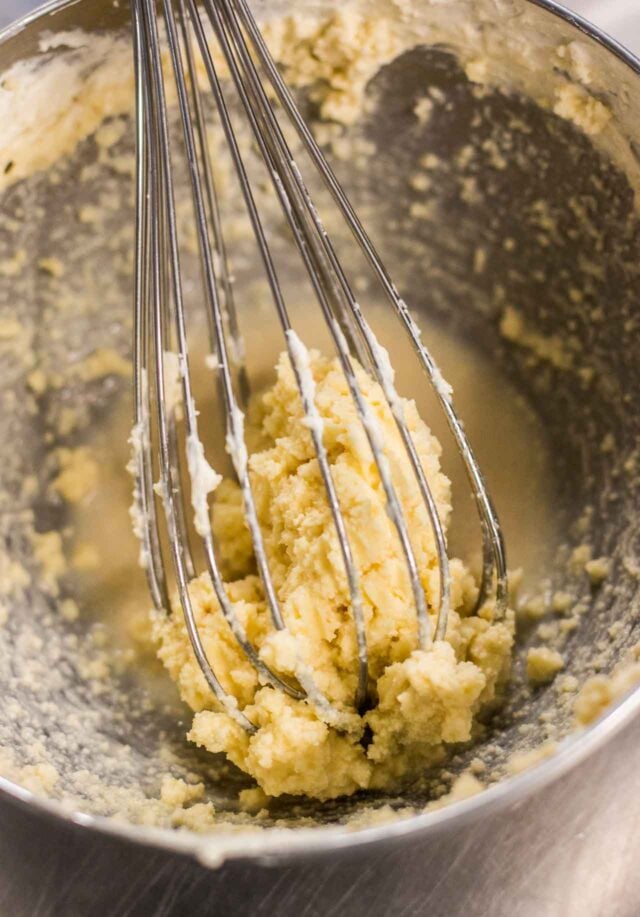 When I asked about the beautiful golden color it had taken on, Romain said it was a natural chemical reaction. The color also depended on what the cows ate, and what breed they were. 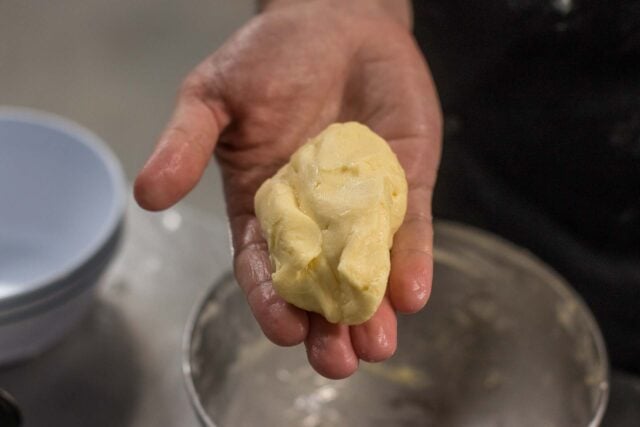 After he kneaded and patted the butter gently to get even more of the water out, he asked if we liked salted, half-salted, or unsalted butter. I didn’t wait for Jane to reply and said “Salted!” so he kneaded in some crystals of salt. 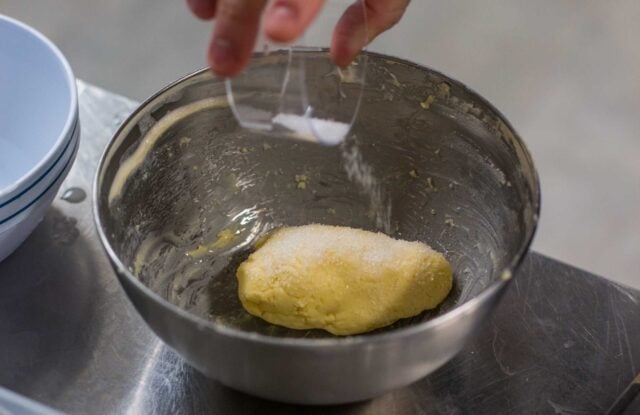 You’d think that after twenty years, I’d know there were three types of butter in France (although the upside of being a tourist is that you aren’t expected to know everything…); doux (unsalted), demi-sel (partially-salted, up 3%), and sel (more than 3% salt) …the last of which I do know is my favorite. But there’s still so much to learn. 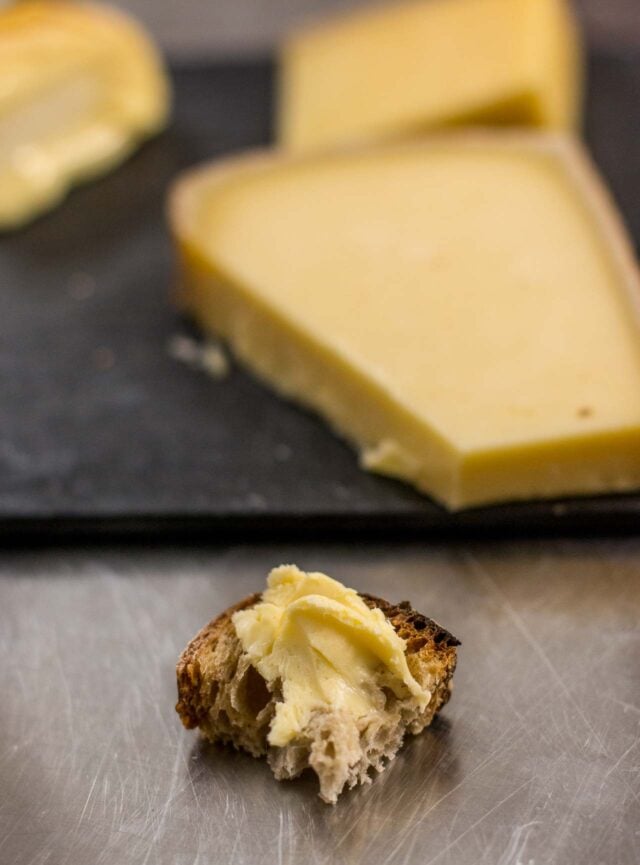 I tasted a bit of the butter on its own and it was truly wonderful and rich and sweet and creamy and fresh milky and crunchy-salty as it was, but it was even better on slices of wheat-rye sourdough bread from Mami bakery just up the street.

Jane and I finished our class with a cheese tasting, declining the wine – because (unfortunately) we’re not really on vacation – but indulged in a 24 month aged Comté that was nutty and rich, and slices of Salers, a cheese that Romain said people don’t often appreciate as much anymore because there are so many industrial versions on the market that they forgot how good the artisanal version is. The other two were a little button of Mâconais, a small partially dried goat cheese with a slightly creamy center, and Soumaintrain, a creamy-soft cow’s milk cheese from Burgundy that comes in pasteurized and non-pasteurized versions and the wedge he offered was a compelling argument in favor of the raw-milk cheese version. 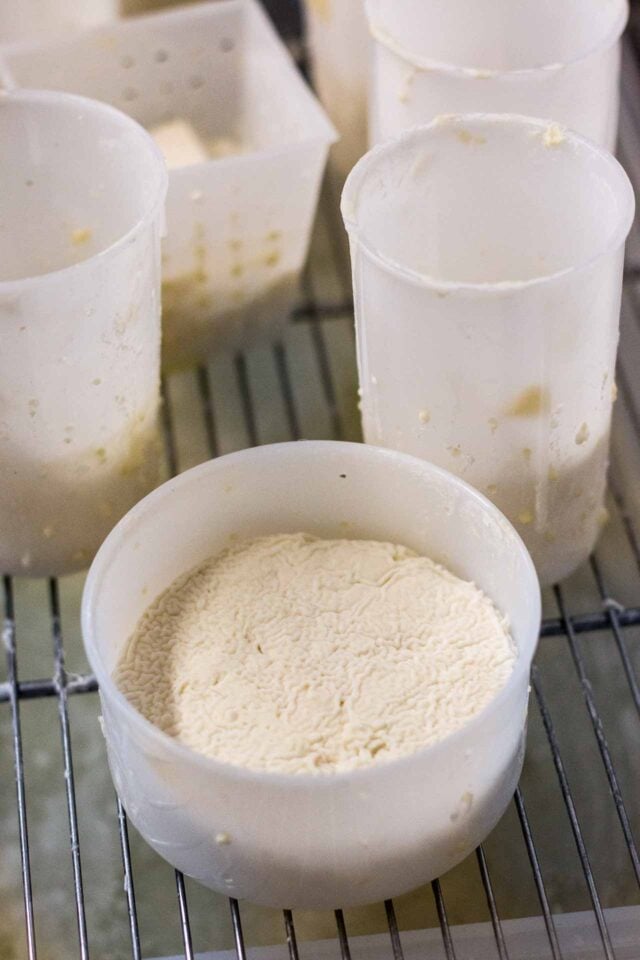 Of course, the cheeses were stellar but I was especially surprised at how good that butter was. There’s no shortage of great butter in France, that’s for sure, and I’ve tasted a lot of it but this better was super fresh, and that’s hard to beat, even though beating it is the way to make it. 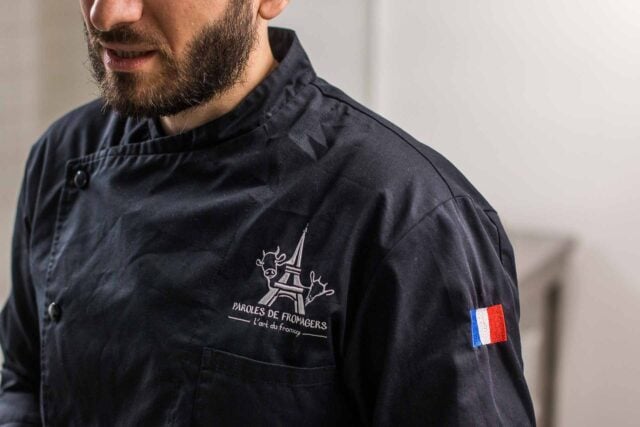