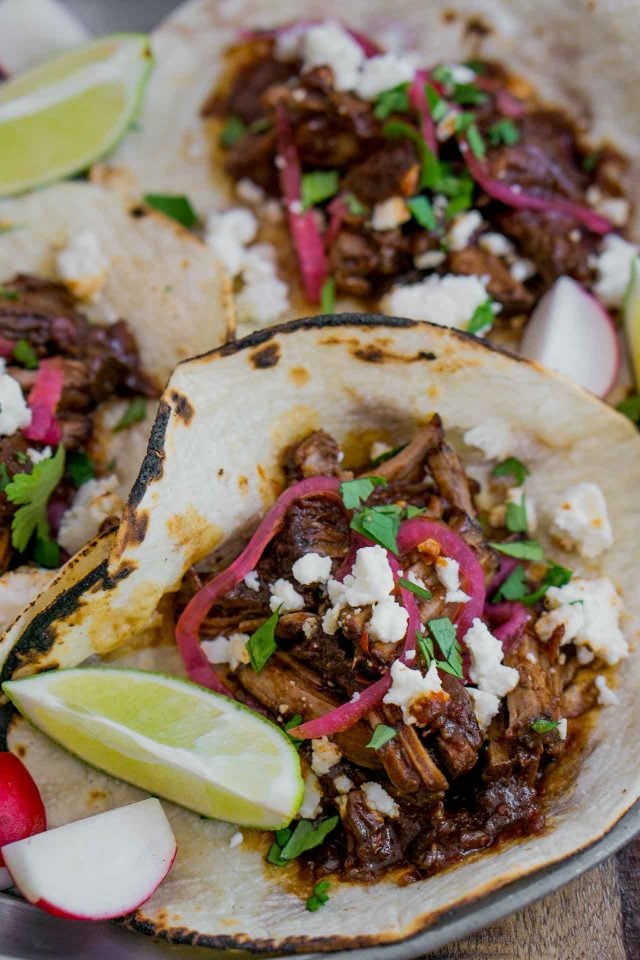 We find ourselves eating in, rather than going out, more than not. For one thing, the food is often better, or just simpler. Maybe I’m getting grouchy, but after a recipe trip where I ate out at every meal, all I wanted was a plate of grilled fish or roasted chicken, and some vegetables. Or just a simple salad with some bread and cheese. 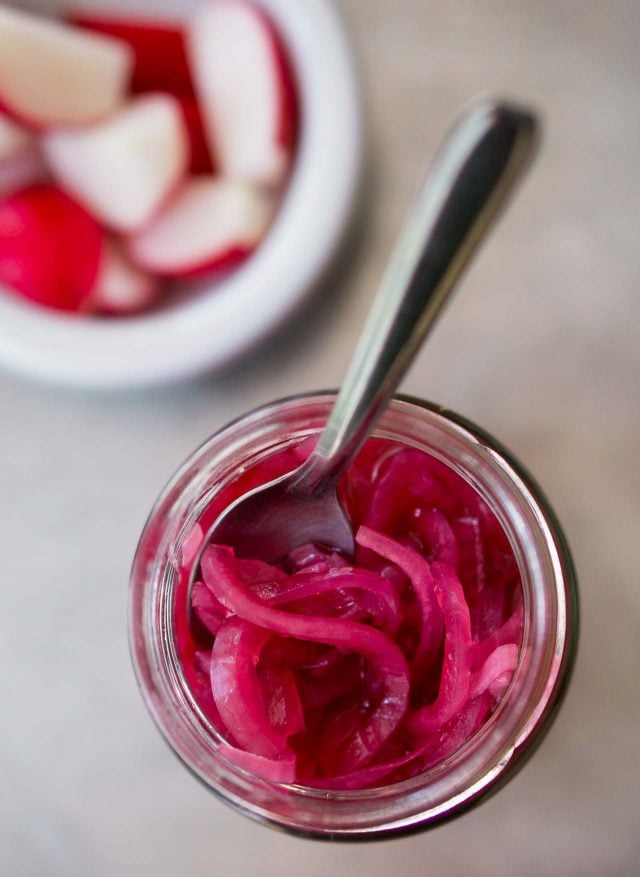 One thing I don’t cook very often, though, is beef. It’s not that I don’t like it, but when I eat at home, I bow to requests by my other half to make things more vegetable-centric.

Vegetables require more work, which I don’t mind. But when people ask me why restaurants in France don’t feature more vegetables, I tell them that it takes a lot more time to select, and prepare, a nice plate of vegetables, much more so than adding a mound of rice or mashed potatoes to a plate 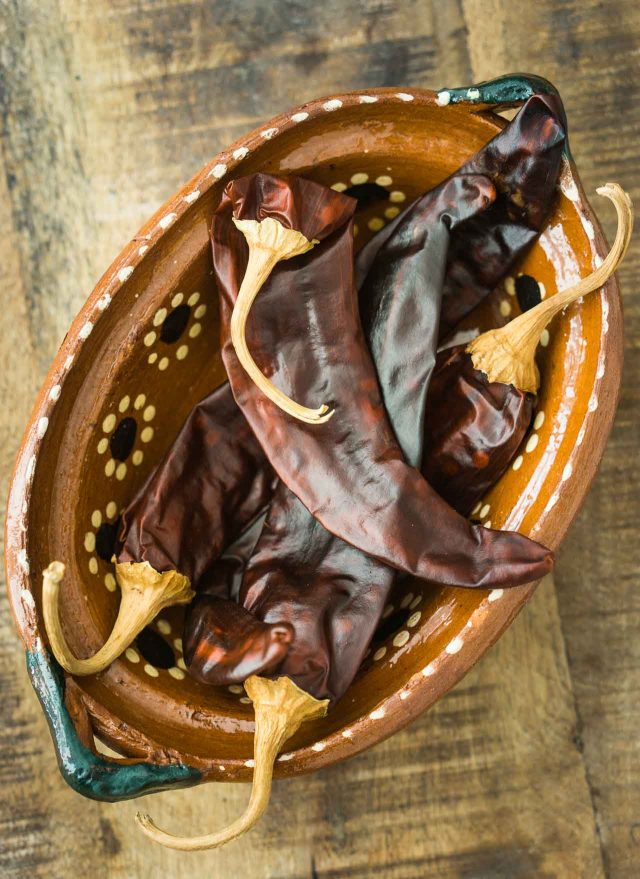 Another reason I like to cook at home is that I can eat whatever I want. Often I just want a big salad for dinner, and other times I crave something like Pasta Puttanesca, Harissa-spiced Chicken, or Onion Rings, which aren’t on local menus. 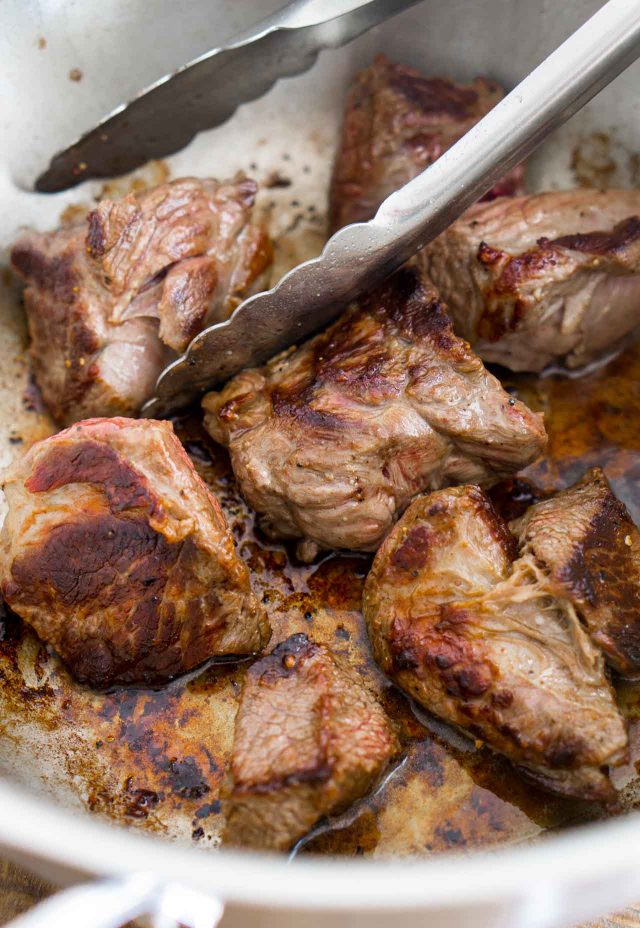 Mexican food is something that has traditionally been lacking in Paris. And while those who don’t live here wonder why anyone would want Mexican food in Paris, a number of places have opened over the past few years that are pretty good, except for one place we tried recently that was awful – my chicken taco had cubes of unseasoned boiled chicken piled on it and another way runny black bean liquid with stringy mushrooms on it.

But you don’t find long-simmered Mexican dishes, like mole or enchiladas. (Although occasionally you score when a friend from Oaxaca comes over to cook for you.) 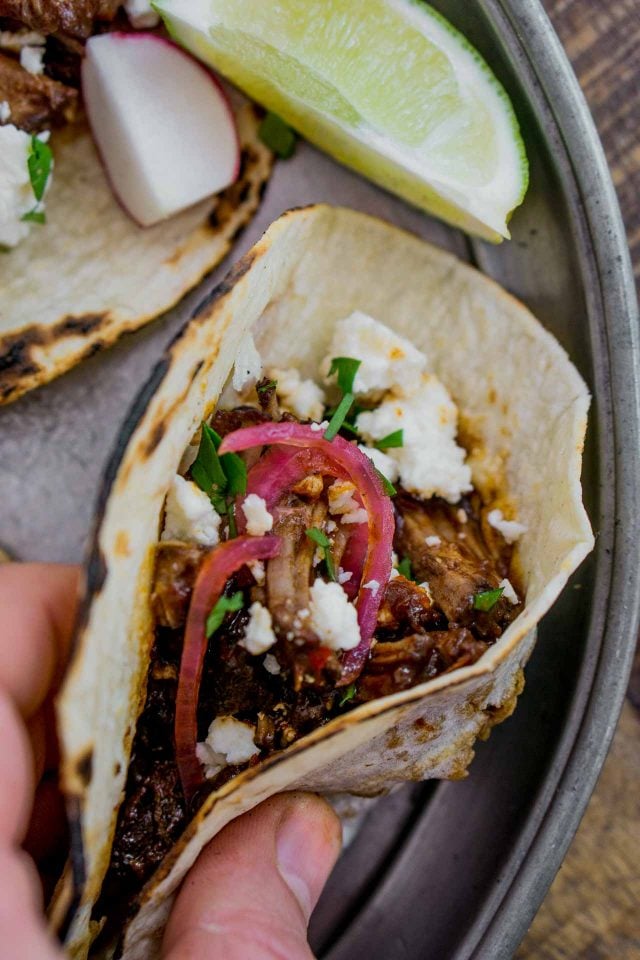 Back on the home front, I’m pretty well-stocked with dried chiles from friends and guests who arrive with packages of foodstuffs, which often includes bags of various dried red pepper. I’ve used them to make chili, but when I was leafing through Repertoire by Jessica Battilana, subtitled “All the recipes you need,” the red chile braised beef sounded like something I needed. 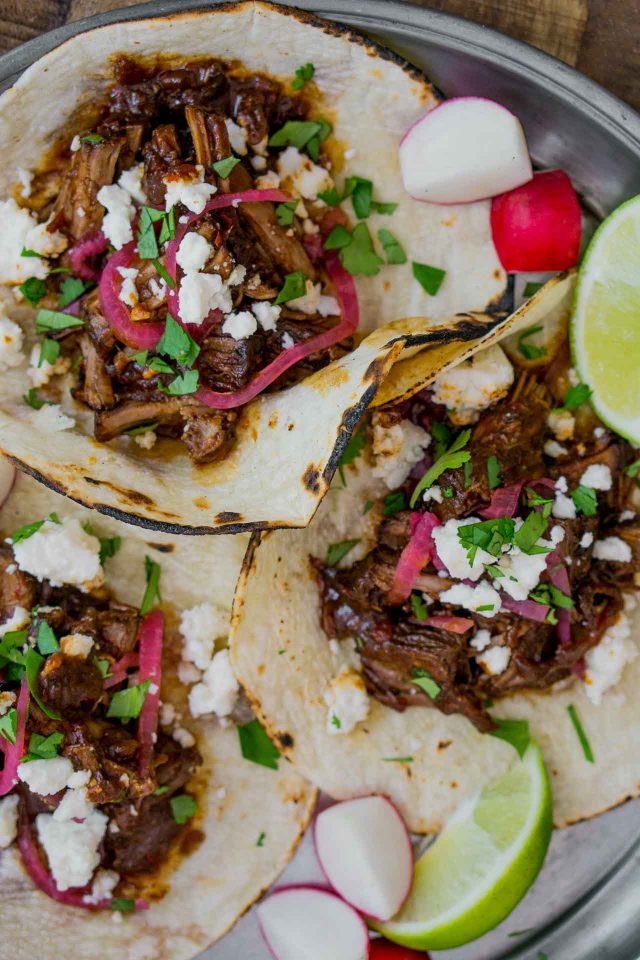 The beauty of this book isn’t just the vibrant salads, like The Greenest Green Salad bathed in Green Goddess Dressing, or Vietnamese Noodles with Pork Meatballs, or Cocoa Oat Cookies, or S’mores Tart, it’s that almost all the recipes are things that I truly want to make, and eat. Oh, and there’s a recipe for Candy Pork in the book, that’s also bookmarked.

This Red Chile Braised Beef is one of those dishes that takes a little bit of effort to put together, but there’s no fancy techniques or equipment necessary. (Although if you have one of those Insta Pots, which I’ve been mulling over getting*, you could probably have it on the table in less time.)

You simmer dried red chiles until soft, then puree them. While that’s happening, you can brown off the chunks of beef. Once both are ready, you add everything together and cook it up until you’ve got a big, rich pot of meltingly tender chunks of beef in a slightly spicy sauce that slicks the meat. When I opened the lid to the pot…I was impressed! 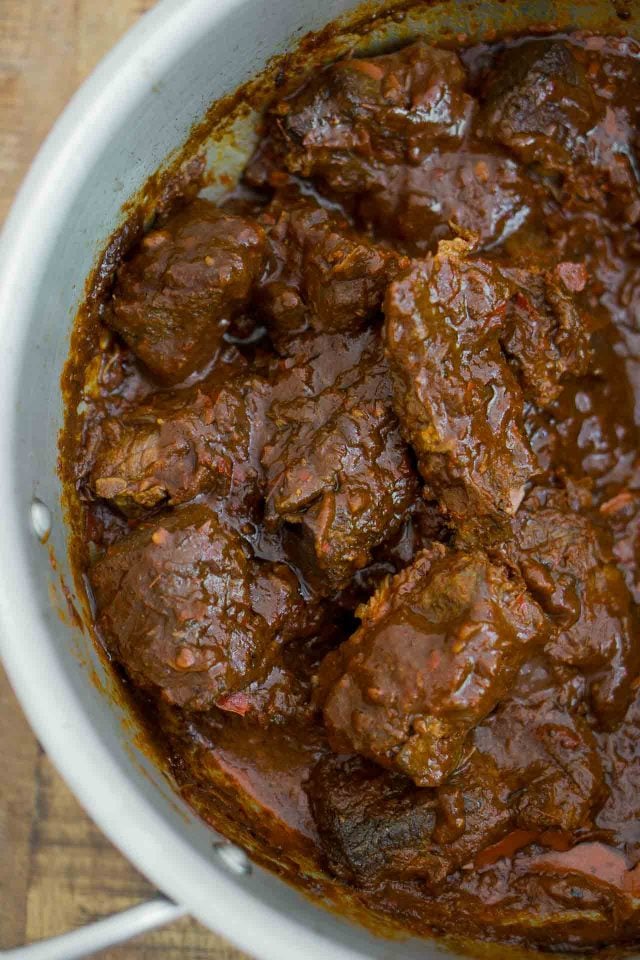 Everyone loves leftovers and the braised beef is even better the next day. We enjoyed them as tacos one day for lunch, with pickled red onions and a sprinkle of cilantro. I did find adding a dash of chipotle sauce on the tacos gave them an extra boost of smoky flavor. They’d also be good with pickled jalapeños and carrots, the kind I used to fill up on at taquerias in San Francisco, with all the fresh radishes they’d put out, too. I sometimes amaze even myself with how many radishes I can eat.

Tacos are another story and I limit myself to three, although I really loaded these ones up with braised beef so two was enough. Thankfully we had more for the next day, and the next… 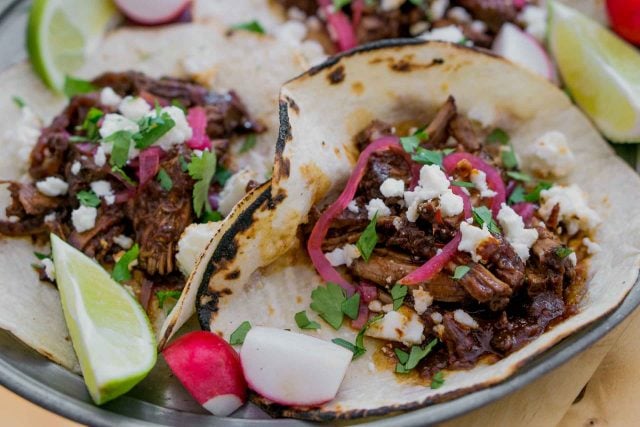 From Repertoire: All the Recipes You Need, by Jessica Battilana Jessica's original recipe called for 4 dried ancho chiles and 4 New Mexico chiles, but I used Guijillos, in place of the New Mexico chiles, since that's what I had. Any medium to mild dried chile would work. (Although if you like things extra-spicy, you could certainly try another dried chile.) I made notes at the end of the recipe for the ingredients, and where to find them if you live in France. Beef chuck can be found in supermarkets in the U.S. or from your butcher. Make sure to trim away any excess fat, vessels, or silverskin, before searing and braising. Jessica also has you make a paste with 1/4 cup masa harina and 1/4 cup water, then stir it into the beef during the last ten minutes of cooking. Perhaps that was to thicken the sauce, although mine was plenty thick when it was done, so I didn't do it.
3 1/2 pounds (1,5kg) beef chuck roast, cut into 3 to 4-inch (8-10cm) chunks
coarse or kosher salt
freshly-ground black pepper
4 dried ancho chiles, stemmed and seeded
4 dried New Mexico, pasilla, or Guajillo chiles, stemmed and seeded
1 quart (1l) chicken stock
3 tablespoons neutral-flavored vegetable oil, plus more, if necessary
2 medium onions, peeled and thinly sliced
4 cloves garlic, peeled and thinly sliced
1 teaspoon ground cumin
1/2 teaspoon ground coriander seeds
1 tablespoon light brown sugar
1. Season the beef well with salt and black pepper. Set aside.
2. To roast the dried chiles (stemmed and seeded), if you have a deep, wide saucepan, you can use that to pan-roast and simmer the chiles in. Otherwise, you can roast them in a skillet (not non-stick), then transfer them to a medium to large saucepan. Heat the saucepan or skillet over medium-high heat, then add the chiles. Roast them, turning them so they don't burn on any side, until they smell fragrant, about 3 minutes.
3. If using a wide saucepan, add the chicken stock. If using a skillet, transfer the chiles to a saucepan and add the chicken stock. Heat until the stock starts to boil, then reduce the heat and simmer until the chiles are completely soft, about 20 minutes.
4. Remove from heat and puree the chiles with the liquid using an immersion blender, being careful as the hot liquid can splatter, and stain. If using a standard blender, let the chiles and the liquid cool until room temperature, then puree until smooth. Do not puree the hot liquid in a blender as the top can blow off and cause injury.
5. To cook the beef, heat the oil in a large Dutch oven. Add as many pieces of beef that will fit in a single layer without crowding them. Depending on the size of your pot, you may have to brown them in batches. Sear the pieces of beef, turning them only as each side turns dark brown, until they're browned on all sides. It'll take between 5 to 10 minutes to brown each batch of beef. Once browned, remove the pieces of beef and put them in a bowl, then sear the next batch, adding more oil if necessary.
6. Once all the beef pieces have browned, and all have been removed from the pot, add the onions and garlic to the pot. (If there is too much oil in the pot after searing the beef, pour most of it out, leaving about a tablespoon in the pot.) Cook the onions and garlic, stirring, until they are soft and translucent, about 5 minutes. (If there is a lot of dark brown fond stuck to the bottom of the pot, add a few tablespoons of water and stir that into the onions. It's a delicious addition.)
7. Add the cumin and coriander to the onions and stir for another minute, then add the chile liquid and brown sugar to the pot. Add the pieces of seared beef back to the pot, along with any liquid, and bring the beef in the sauce to a boil, then reduce the heat until the liquid is barely simmering.
8. Cover partially and cook until the beef is very tender, about 2 1/2 to 3 hours. Adjust the heat so the liquid is at a low simmer. While the beef is cooking, stir it a few times so the pieces are cooking evenly, and if necessary, add a splash of water or stock if the liquid has thickened and reduced too much before the beef is fully cooked. You can also taste the liquid and add more salt, if necessary.

Serving: Serve the beef over rice or with warm tortillas and any condiments you like, for homemade tacos. Another option is to serve it with homemade cornbread.

Storage: The braised beef is actually better 1 to 2 days after it's made. The beef will keep, refrigerated, for 3 to 4 days. It can be rewarmed in a pot over low heat. If the sauce is too thick when you're rewarming it, add a bit of stock or water to thin it out.

Ingredient Notes: For those outside of the U.S., specifically in France, I use ricotta salata (dried ricotta) for queso fresco, which is available at some Italian food shops. Fresh tortillas may be harder to find. There was a fresh tortilla company in Paris but they've closed. I have found tortillas at Middle Eastern food markets on occasion. If you're a DIY type and want to make your own corn tortillas, BocaMexa sells masa harina, as well as corn tortillas. One mail-order company in France is Casamex.

Beef chuck in France would be stewing meat, which often goes under the name "bœuf bourguignon" at butcher shops. Paléron of beef is a cut that is braised. Plat de côtes is another.

*I have a slow cooker that’s still in the box after 3+ years. So perhaps I don’t need one. 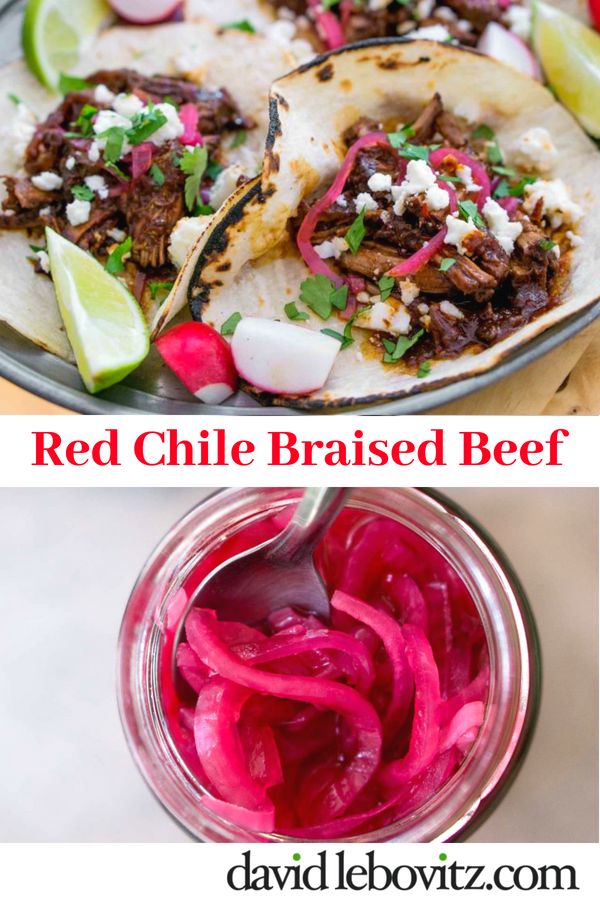