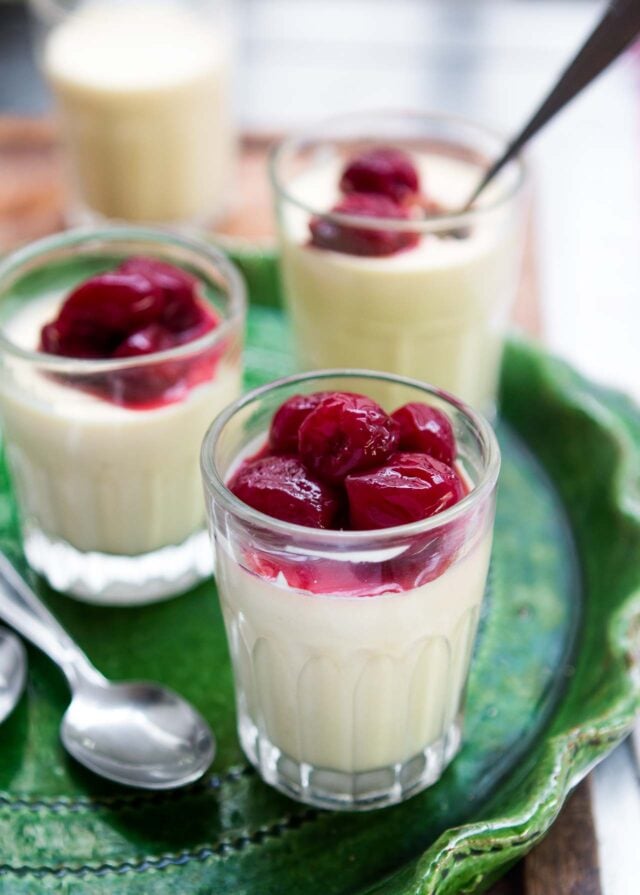 I don’t remember the first time I made this dessert, but I certainly remember being wowed by its flavors, and the creator of it, Madeleine Kamman. (Who I’ll get to in a minute…) I’ve been making it for years and it’s a wonderful way to use white chocolate, which pairs remarkably well with dark chocolate, but also goes nicely with everything from berries and lemon, and caramelizes beautifully, which can be used in cakes, sorbets, and ice cream. (I learned how to make it at the Valrhona Chocolate School, and it’s become so popular that the company now sells it by the bar.)

What can’t white chocolate do?

Well, it can’t replace chocolate because it’s not chocolate. Milk chocolate technically isn’t chocolate either; it’s chocolate with milk added. On a similar note, I’ve only had Home Fries served to me at diners, not at home. And I’m still perplexed that we call it Banana Bread, because some people have told me that Cornbread, if made with a few teaspoons of sugar, isn’t bread, it’s cake. Yes, some insist that white chocolate “…isn’t chocolate!” but herb tea, as it’s commonly called in the U.S., has no tea in it. So if you’ve ever sipped a cup of chamomile “tea” (or even if you haven’t), you are welcome to enjoy white chocolate! 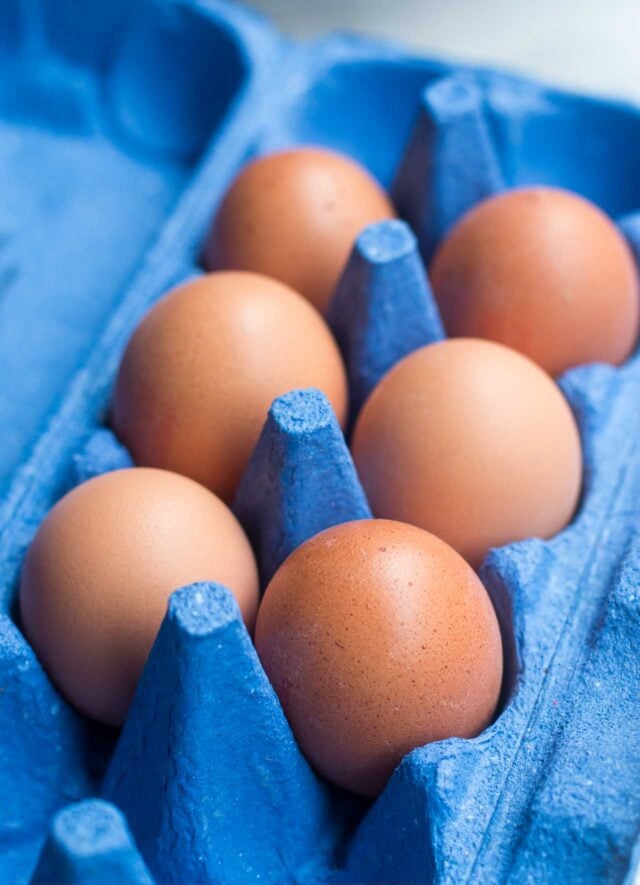 White chocolate has a creamy, tropical richness due to a base of luscious cocoa butter, and is one of the keys to this lovely Bavarian, a French gelatin-based custard, along with the French herbal liqueur; Chartreuse. Bavarians (or les bavarois) have taken a backseat to panna cotta, even in France, where panna cotta has become as ubiquitous in cafés and restaurants as the Spritz. I was introduced to this Bavarian when I worked at Chez Panisse, and somehow, we got this recipe that came from the legendary Madeleine Kamman.

Madeline Kamman may not be a household name, which is unfortunate. To be honest, I was in awe of her talent, but also vaguely terrified of her. I knew she was a rigorous taskmaster and had commented unfavorably in public about chefs like Paul Bocuse and Julia Child, which some say was the reason she never got the fame she deserved. Bocuse had made a remark about where he thought a women’s proper place was in the home (which wasn’t quite in the kitchen…), so she hung his picture upside-down in her restaurant.

(She was notoriously hard on her students and my friend Joanne Weir, who studied with her, wrote in her book Kitchen Gypsy about how half the class “led a revolt against Madeleine’s behavior” and walked out of the cooking school midway through the course. All I can think about as I write about her now, is that someone needs to write a comprehensive biography of Madeleine Kamman.) 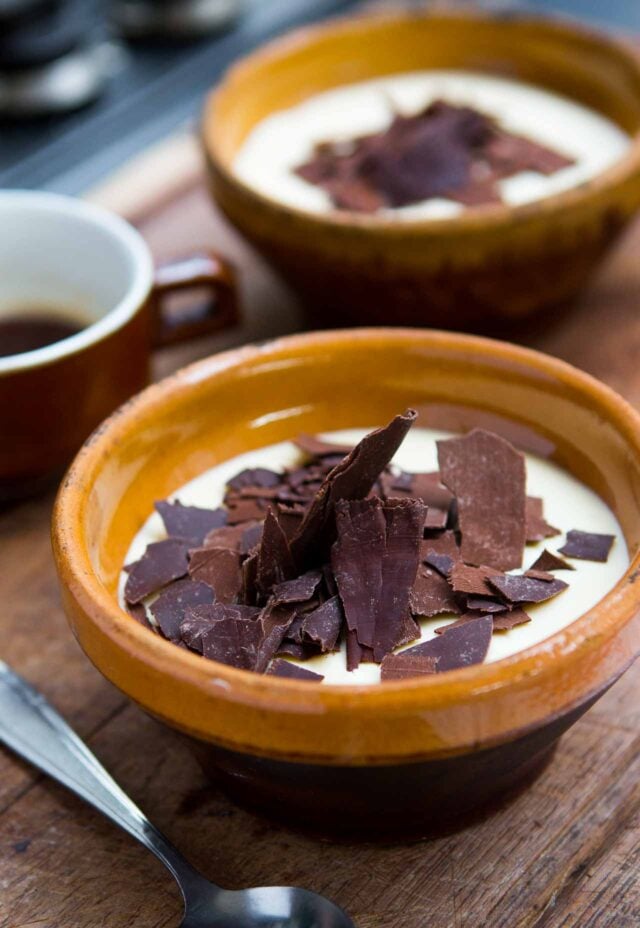 On a personal note, I’d read, and relied on, Madeleine’s incredible cookbooks, including When French Women Cook, The Making of a Cook, and Madeleine Kamman’s Savoie, an hommage to the cooking of her native region in France, and was excited – but nervous – when she came to eat in the restaurant when I was working there. Her visit, and her sharply-focused remarks during and after the meal, had us talking about her for days afterward, and whenever I make this dessert, I think of her. It combines a French technique; the liaison of eggs and milk cooked together (as far as I know, there isn’t a precise word for “custard” in French), with crème fouettée (unsweetened whipped cream), and Chartreuse, a uniquely French ingredient. 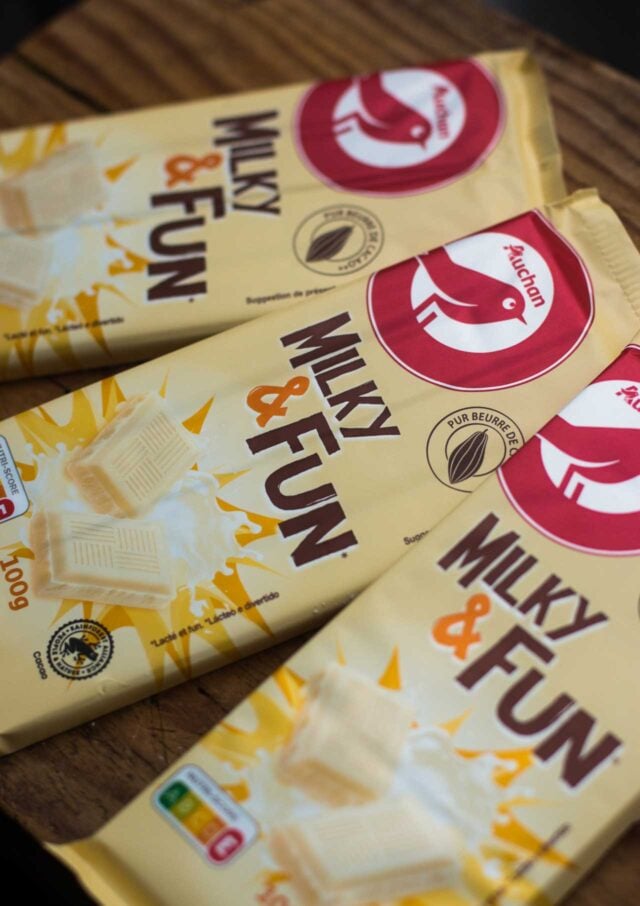 A few words on this recipe and ingredients:

In many parts of the world, people use sheet gelatin while in the US, powdered unflavored gelatin is the norm. Sheet gelatin varies widely in sheet size and strength, so it’s not always a straight conversion. However, it’s not really an issue if you use a little more or less gelatin in here. (In the original recipe, Madeleine says to double the gelatin if you want to unmold it. If you do, oil the mold first.) Fish gelatin is available to those who avoid beef and pork, although it’s not widely available in France. Using agar-agar is a FAQ and the answer to those wondering if it could be used here is “I don’t know.” I don’t have much experience cooking with it so can’t advise. I wrote more on gelatin and conversions here. 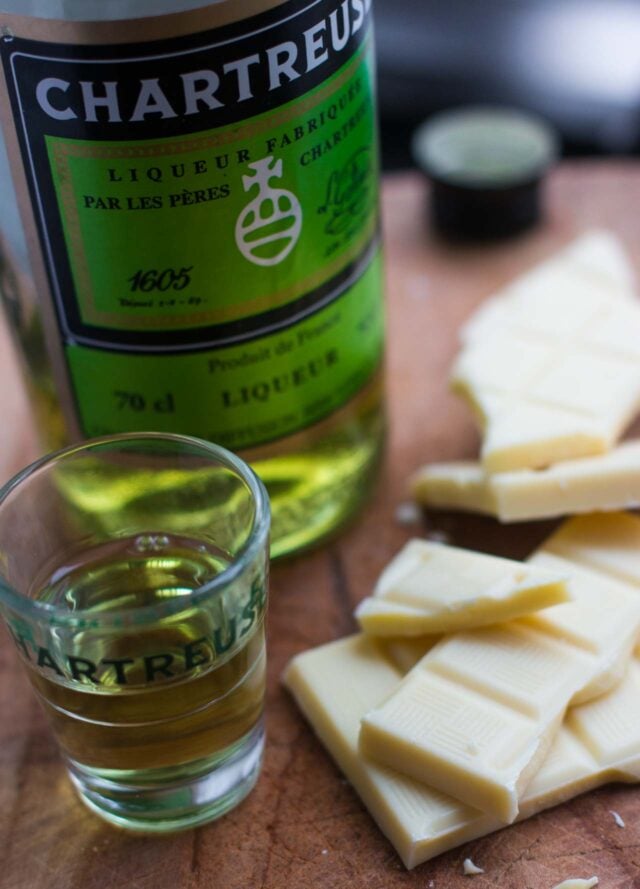 Since Madeleine Kamman wrote extensively about the part of France where Chartreuse is made, it’s natural to use it here. Chartreuse is not inexpensive* and there really isn’t an ideal substitute. It comes in half bottles, however, which are more wallet-friendly. The recipe isn’t that fussy and if you want to leave it out, you could add a few drops of vanilla extract to the whipped cream instead. I haven’t made this with another liqueur but orange liqueur would be an interesting swap out, as would white rum, gin, genepy, Izarra, kirsch, or another eau-de-vie. If you try a different spirit, let us know in the comments how it works out. (Although let’s keep that between us, Madeleine might not be pleased…) If doing a swap out, you’ll want to add it “to taste.”

(*That said, Chartreuse is one of the only liqueurs that continues to evolve in the bottle, so you could consider it a good investment as vintage bottles sell for hundreds, or in some cases, thousands of dollars/euros.) 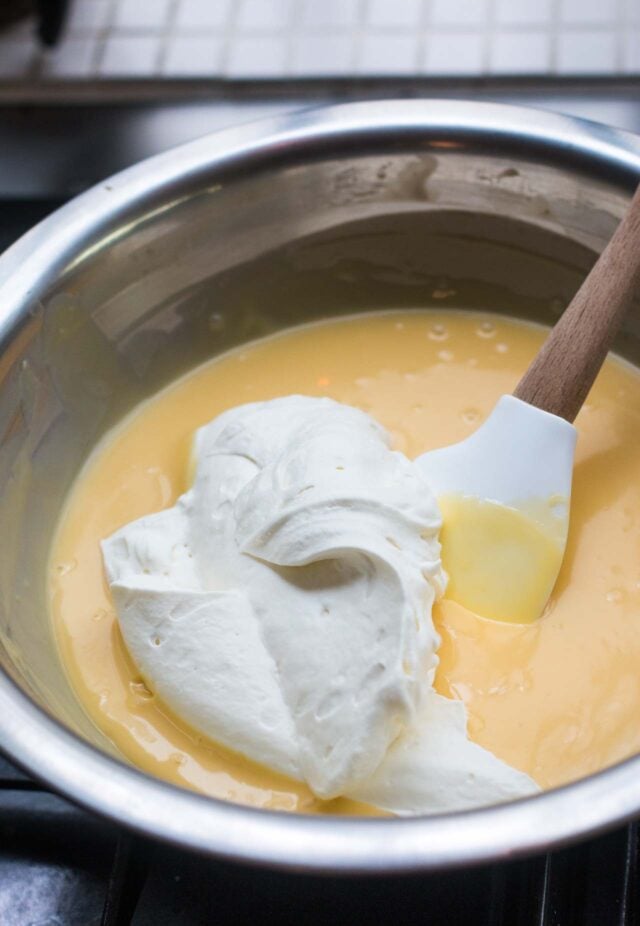 I serve this Bavarian several ways. Dark chocolate is a naturally great pairing with white chocolate, especially notable in the winter when fruit options may be limited. To make shavings, run a vegetable peeler down the side of a dark or milk chocolate bar to make copeaux.

Fruit also works very well with white chocolate, and in this bavarian, I had some cherries I’d made into a compote last summer tucked away in my freezer for a special occasion. And recently I found the time to use them. Fresh berries, such as raspberries, blackberries, blueberries, or strawberries tossed in a little sugar, are also wonderful piled on top.

Adapted from Madeleine KammanI've given some tips on gelatin, liqueur, and a few other FAQs in the blog post.
Course Dessert
Cuisine French
Servings 8 servings

Serving: Serve cold with chocolate shaving on top, or fresh berries, or a compote of cherries. It's also good with poached pears or roasted figs.  Storage: The bavarian will keep for up to 4-5 days in the refrigerator.